An OC beast that runs cool, silent, and also happens to be built like Rolls Royce.
MSI GeForce RTX 3080 Gaming X Trio Review
Call of Duty: Black Ops Cold War is the New Black
Post by Steve Farrelly @ 04:29pm 27/08/20 | Comments
We chat with Treyarch and Raven about the next Black Ops and uncover some exciting truths...


Remember when Sam Worthington couldn’t only not choose an accent, but maintain the one in the moment he’d haphazardly adopted? Yeah, I loved Call of Duty: Black Ops too. Seriously though, the Mason and Woods characters became instant celebrities within the CoD annals from that game, and Treyarch elevated itself from B to A in a heartbeat. To this day my favourite Call of Duty moment is when, as Mason, we start having brain washed flashes while meeting with JFK. It was this single moment in a clearly hogtied IP where you could *see* Treyarch flexing some storytelling muscle. And now they’re back, and not in Pog form.

For most, coming back to Call of Duty is an exercise in Prestige. But for mine, it’s always been story. Yeah they’re short, they have one too many chopper crashes and that space one kind of fucked it all up, but as far as intrigue and moment-to-moment explosions go, the series hits all the right notes. I mean, I was absolutely devo that time Ghost died, but was elated when I pulled Price out of his jail -- tit for tat and all that. It just all kind of grabbed me in a way the series hasn’t been able to in a while.

"It had a tone all its own, but to be completely honest, I just wanted OTT CoD..."


The reimagined Modern Warfare went deep and dark. Not entirely to its detriment, but it flattened a lot of those notes and became its own worst narrative enemy. The deep was the real stuff, the dark was kids having to survive and kill. It had a tone all its own, but to be completely honest, I just wanted OTT CoD. I wanted a game that didn’t try to send me a message in a bottle; no political lean one way or another -- a game willing to blow up the Eiffel-fucking-Tower. 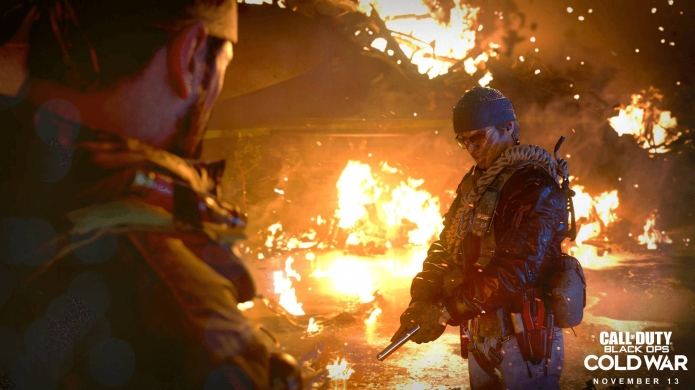 I wanted digital-perfect Raegan, and I didn’t even know it.

Treyarch and Raven’s decision to fill the gap between Black Ops and BLOPS II is the correct one (Mark Lamia will have my head for that, but I know at least Joaby is laughing) because that tale; Mason and Woods’ secret war has SO MUCH to offer. And I’m sorry for yelling at you, but the Cold War is so often forgotten in modern storytelling despite its deep and dark being the very real OTT I want(ed). And Cold War, as in, the Call of Duty one, well I could care less about Prestige and now just desperately want to know: what happens next?

“The important thing for us was… we love Black Ops 1,” enthuses Raven’s Senior Creative Director, Dan Vondrak. “And the thought was -- we love the whole series -- but there’s this huge gap in time between Black Ops 1 and Black Ops 2. And [the era] has such a rich history, and for us to ignore all that felt wrong as fans.

“We LOVE Mason and Hudson and Woods and we couldn’t have imagined erasing that (their story), or re-writing it. So the logical thing for us was to write this love-letter to Black Ops 1 and make this game that can live between [Black Ops] 1 and 2 -- that was always our intention, to have the Black Ops that was there, and to build on top of it.

“The last thing we wanted to do was wash away all that awesome history.” 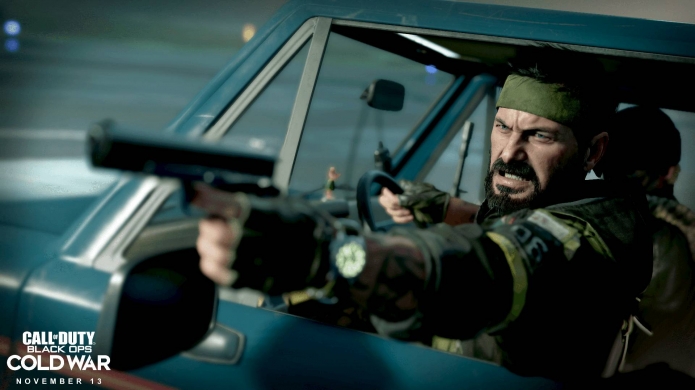 Treyarch’s Dan Bunting adds that “there are just so many more stories in this universe we can tell, that [Cold War] is just a really fulfilling way to pay homage to [Black Ops]”. It’s important to highlight comments like this. We weren’t given the highest levels of access, but words can speak volumes in the vacuum of meaningful content. While we know there’s a character creation system and that Mason, Hudson and Woods will be bit players in your story we can take away one seriously important component: these guys LOVE the original Black Ops, and that game’s swagger. As a baseline, that’s good shit -- the first Black Ops, in isolation, was Treyarch throwing a gauntlet; all its credentials and banked favour into a single vision for what Call of Duty should be. I’m not racing studios, and they wouldn’t ‘want’ that, but Black Ops is more than just an outlier against the series’ popularity from Jason and Vince’s breakout moments. From Spider-Man and Tony Hawk through to Call of Duty, Treyarch has bled Activision, for Activision.

And this gives me faith in Cold War.

"At the fore this time around is a greater sense of growth, not just for the player, but for the studios involved..."


If your basic vision is to realise a digital-perfect Reagan in the 80s after setting up a clandestine backdrop that includes heavy situations like The Bay of Pigs, brainwashing and assassination, and pull it off, you’re in good stead. Call of Duty: Black Ops Cold War is doing just that, but at the fore this time around is a greater sense of growth, not just for the player, but for the studios involved.

“When we wanted the player to create their character, we wanted them to immerse [themselves] into the game,” Vondrak says emphatically. “We love the idea that the player can be anyone, anywhere in the [game] world -- that they could be the Black Ops soldier they wanted to be.”

Dan’s full statement takes into account things like gender and place of birth. What this means is you’re writing your own chapter in this fictional history, no longer constrained by flashback and bad accents. But how this plays out is yet to be seen. Treyarch has forever chosen voiced, fleshed out avatars for the player, bucking Infinity Ward’s traditional voiceless player-self.

“It was just too good of an opportunity,” Dan adds. “To let the player immerse THEMSELVES into the game, instead of just having them [play] a predefined role.”

On top of character creation, certain levels will contain sandbox elements and multiple paths. There are even a couple of different endings up for grabs, based on the way you play. But both Raven and Treyarch are quick to point out that you’re still due for a “Call of Duty”, confirming the rollercoaster story beats and mission structures will keep you on your virtual toes. It’s just that this time around, you have a sense of agency. We had prepared a question around how this new approach to level design and agency changes AI and if they had challenges removing the “fish in a barrel” baddie design structure that has long-plagued the series, but it went un-asked due to time constraints. 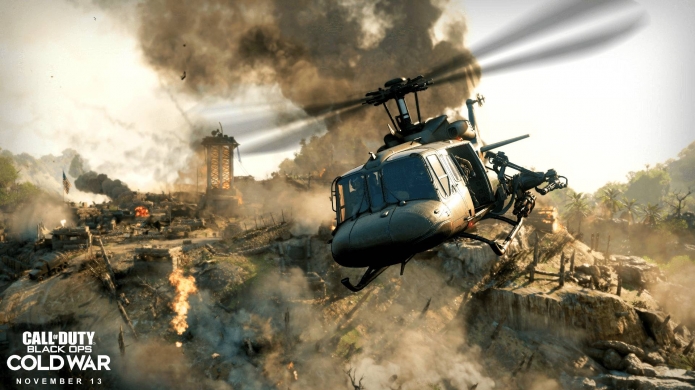 We’ll be keeping an eye on that though, because if everything is as promised, AI might be the biggest shift in the campaign portion of the series yet.

Additionally, we have new power. Retroactively, this is rooms and rooms full of power from back in the day and all studios involved are making sure it’s used to genuinely craft every single Reagan wrinkle. Because as we push through 2020 we need woe, concern and heavy crowns leaving their marks. Again, retroactively. Of course.

“It’s impossible to have technology be second to the story,” Vondrak asserts. “As soon as we sit down we start talking about ‘how can we tell this story?’. Like, what lighting features do we have? How big can we make the levels? What kind of events in these levels can we have? Can we have all the lights turned off? How many enemies can we put in the game?

"The history side of the game, he enthuses, is a mere tool for an experience you can believe, while doing the unbelievable..."


“It’s back and forth all the time during development and we’re always pushing technology and pushing the creatives to take advantage of [technology]. And for sure, we’re taking advantage of the PS5 and the [Series X] and all of that.” 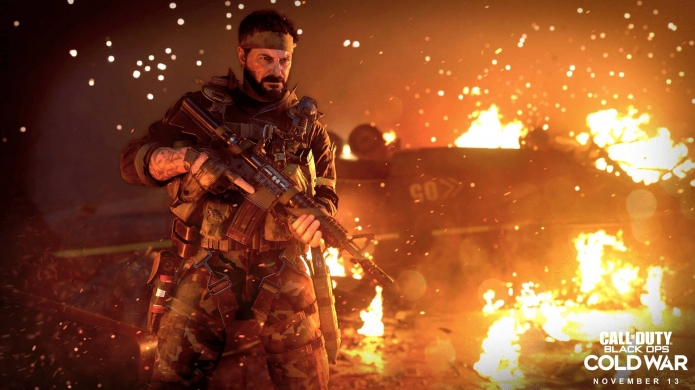 Old is the new ‘new’ this year and there’s a certain irony to being able to utilise new tech to craft old things. Even if fictional. But if Treyarch and their pals can pull off this addition to the stellar story that is Black Ops, we’ll be happy. We’ve got more coming soon, so make sure you stay tuned, but we’ll leave you with this nugget from Vondrak, if that is his real name:

Black Ops Cold War is “conspiracy grounded in history”. The history side of the game, he enthuses, is a mere tool for an experience you can believe, while doing the unbelievable. “The conspiracy feels more real that way,” he concludes. And if we’re to believe anything at this point, it’s that the gap years that are 1968 - 1981 just got a whole lot more interesting.