Where we fall in love with the turn-based RPG combat and new protagonist Ichiban Kasuga.
Yakuza Goes Full RPG In The Brilliant Yakuza: Like a Dragon
GIGABYTE AORUS for Gaming and the Importance of 72% NTSC
Post by KostaAndreadis @ 05:26pm 26/08/20 | Comments
When looking at a gaming laptop there’s a story behind what the eye can see. As the GIGABYTE AORUS range showcases, accurate and vibrant colour plays an important role in the games we play. 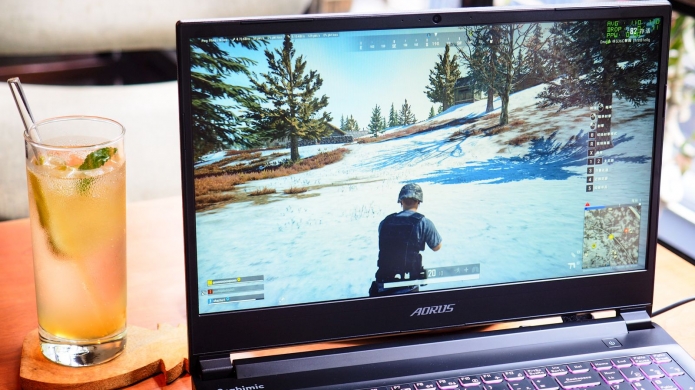 When looking at a new gaming laptop the eye glances over to certain specs and details. Things like what sort of CPU it might have, does the graphics card support high-end gaming. Maybe even a little bit of ray-tracing, as supported by NVIDIA’s GeForce RTX range.

When factoring in the display -- outside of size -- you might think that a 144Hz refresh rate is the beginning and end of the display story. Higher frame-rates are, after all, a key part of the modern PC gaming landscape. Just as important, though, is how accurate the overall colour a display can reproduce. All based on what the human eye can see; a key part of all gaming laptop displays that play into the collective brightness, detail and vibrance you see in images presented. 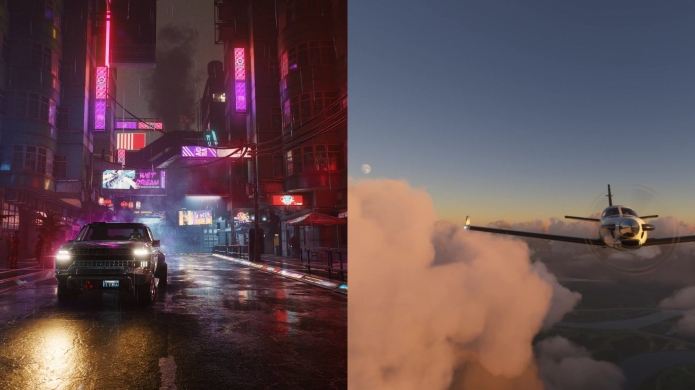 With Microsoft Flight Simulator that might mean extra detail noticeable in the clouds or the buildings and landscapes you fly over. Walking through Night City in November’s highly anticipated Cyberpunk 2077, the neon glow of signs and shops and the rain hitting the streets will just about pop off the screen. The better a display is at recreating colour or, specifically, colour that pops, the more impressive and detailed a game will look.

Higher frame-rates are, after all, a key part of the modern PC gaming landscape. Just as important, though, is how accurate the overall colour a display can reproduce.


More than pretty visuals, competitively speaking, in Call of Duty Warzone a higher colour gamut can mean the difference in seeing something red or green moving on the distance versus a small greyish washed out blur. One that could snipe you at any moment.

In addition to offering up a range of CPU and GPU offerings suited to gaming, and displays with the 144Hz refresh rates, the GIGABYTE AORUS range of gaming laptops places a special focus and attention on colour accuracy.

Living Colour – The NTSC You See 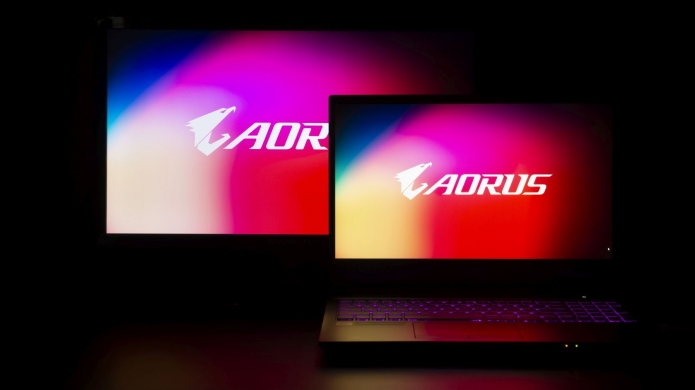 In creating its AORUS range of gaming laptops, designed for those looking for a powerful and impressive portable gaming solution, GIGABYTE has ensured that all models come standard with wide-colour gamut displays capable of recreating 72% of the NTSC standard.

GIGABYTE has ensured that all models come standard with wide-colour gamut displays capable of recreating 72% of the NTSC standard.


Naturally the first question you might have is: “what is 72% NTSC?”. Even with a fancy colour-filled graph there’s more explaining to do. Basically, the story is this: back in 1931 a fancy-suit wearing committee came up with a way to work out the “electromagnetic visible spectrum”. Which is Tesla-speak for the colours your human eyes can see. Fast forward to 2020 and things like Adobe RGB, DCI-P3, sRGB, and NTSC are all specifications and measurements put up against this CIE 1931 spectrum. Where, well… a triangle highlights the specific colour ranges visible. 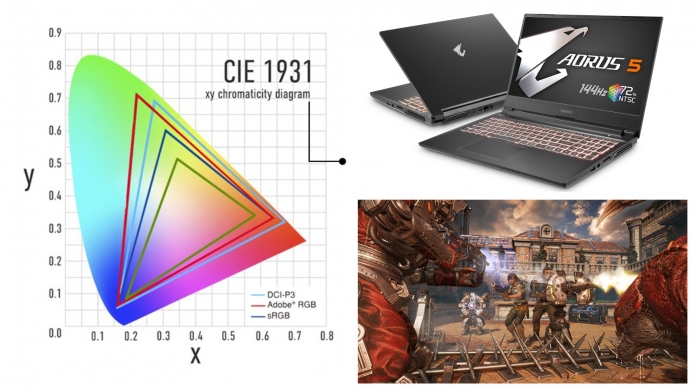 There are of course differences, with the easy to understand rule being the bigger the triangle the better the colours. Basically, it’s The Legend of Zelda rule. In terms of the TriForce of NTSC Power, the 72% rating is roughly the equivalent of 100% sRGB, where over 94% NTSC you get into the high-end DCI-P3s and Adobe RGBs of the world.

In practical terms NTSC is a measurement that dates to the early days of TV – but it’s one that can compare most if not all colour gamut standards. Standards, graphs, percentages, it’s not exactly exciting stuff. But as many affordable gaming laptops adopt displays equivalent to 45% of the NTSC colour gamut, it’s an important thing to learn about.

And with the 72% NTSC of the entire GIGABYTE AORUS range, you can see the results -- higher levels of immersion and better-looking games. 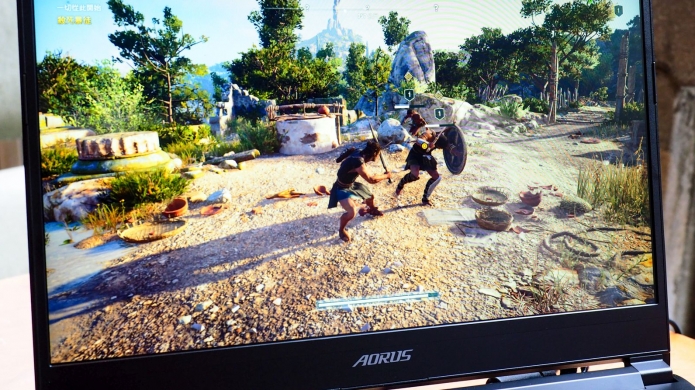 In the age of content creation, competitive gaming or simply relaxing to play a big budget cinematic adventure like Horizon Zero Dawn (or a small indie like Roki) – experiences are delivered by the entirety of the hardware in play. The processor; the graphics; the memory; the storage; the input devices... the display -- it’s all a hot mess of importance.

Compared to the alternative, a display with 72% NTSC not only adds to immersion, but the detail of the digital worlds you explore.


When it comes to displays, high-refresh rates and low-response times add a tactile feel to movement and action. Quickly aiming down a corridor in Rainbow Six Siege to make sure it’s clear, turning a corner in Forza Horizon 4 and keeping that perfect racing line.

By that same token, the colour-gamut; the detail; the brightness; the clarity -- it has the same impact. The ability to see what lurks in all corners of DOOM Eternal’s high-speed, saturated, and intense combat arenas. To be able to pick up little bits of detail scattered throughout the environment as you’re walking through the corridors of Control’s underground facility. Compared to the alternative, a display with 72% NTSC not only adds to immersion, but the detail of the digital worlds you explore.

Colour-gamut is often tied to a display’s overall brightness too, and in the case of the GIGABYTE AORUS range and its vibrant 72% NTSC displays – brightness gets up to 320nits. The brighter the image, paired with a better contrast ratio, all-but removes the washed-out look seen in less accurate displays. And in doing so, a 72% NTSC display can make games running on the same exact hardware -- using the same resolution and detail settings -- look noticeably better.

Price and Performance (and Display) 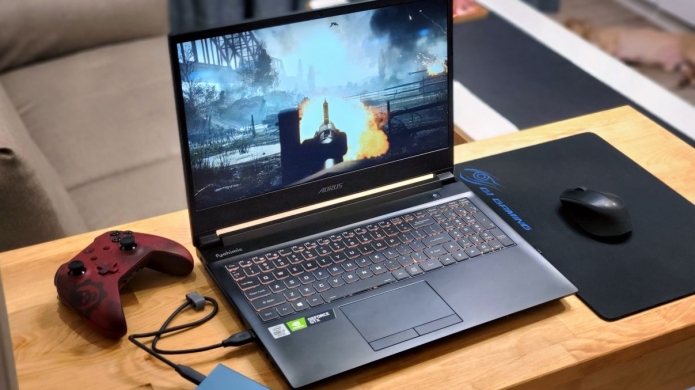 GIGABYTE has been in the PC game for decades now and its gaming-oriented AORUS range across everything from desktop motherboards to graphics cards to all-in-one gaming laptops, like the GIGABYTE AORUS 5, has been one that has grown from strength to strength. Where quality, performance and ticking all the right boxes factors into development and design.

Across the entire GIGABYTE AORUS laptop range, from the affordable models to the higher-end beasts, the colour gamut baseline for each display is 72% NTSC.


When spending a couple of grand on a new gaming laptop the display should factor into the decision making. For consumers opening their physical or digital wallets, and the hardware makers out there slapping together metal, silicon, and a few too many RGB lights. A gaming laptop is a collection of various parts – but, cut a corner in any one area and the result will be an experience that is ultimately lacking.

Across the entire GIGABYTE AORUS laptop range, from the affordable models to the higher-end beasts, the colour gamut baseline for each display is 72% NTSC. And that’s something, as they say, you love to see.