The World Game is back, natch, so we go through all the big changes coming in EA’s FIFA 21.
FIFA 21 Preview - Inside the Big Gameplay Changes Coming
World of Warcraft: Shadowlands - Blizzard on Covenants, Creating a Challenging Endgame, and the Road to Launch
Post by KostaAndreadis @ 03:05pm 21/07/20 | Comments
Recently we had the chance to speak to John Hight, Executive Producer on World of Warcraft, to chat about all things WoW. 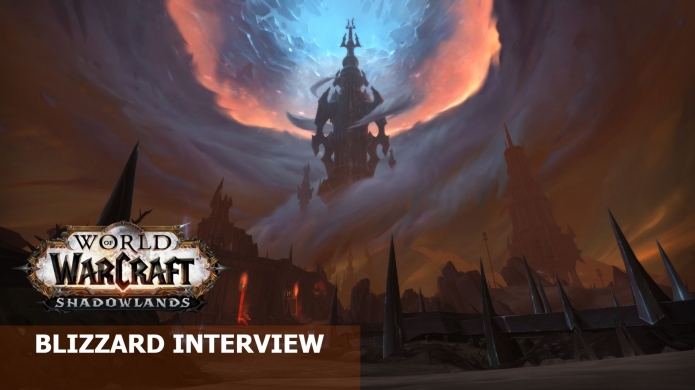 In Part One of our deep dive into Shadowlands with Blizzard we discussed development in 2020, the new player experience, and why 120 levels of progression was too many. Here in Part Two we discuss Covenants, the endgame, and how creating something challenging can be exciting.

“There's one story arc that takes you through all four of the Covenants,” John Hight, Executive Producer on World of Warcraft, explains. We’re talking about the groups overseeing the afterlife and their role in the afterlife of World of Warcraft: Shadowlands, Covenants. An afterlife where after the main story reaches its climax, players will be asked to select a Covenant to align with. Well, not so much ask - this decision will major one and play straight into the endgame, Covenant-specific progression, and beyond.

“As you're levelling up through Shadowlands you will be exposed to and meeting all the major characters in each of the Covenants,” John explains. “That gives a good sense of the flavour, the culture of each Covenant, and we're hoping that people will make their choices based on what feels right to them. There's an R in RPG, and we want that decision to be a representation of who you are or who you want to be. With that we've tried to give a lot of flavour to the four different Covenants.”

For John and the rest of the WoW team at Blizzard, it’s their goal to make this decision as painstaking or seamless as choosing your character’s class. “If you want to a bad boy Necrolord, awesome. If you want to be a righteous Kyrian, that's cool too,” John adds. “We're trying to provide some variety, but we want it to feel like an easy and comfortable decision to make. In the same way when you're looking at the various classes and their abilities. I like the idea of pets; I'll play a Hunter. Or, I like taking care of other people, Priest is for me. We want that same feeling for Covenants. Hopefully, it feels as important to you as the class decision that you made.” 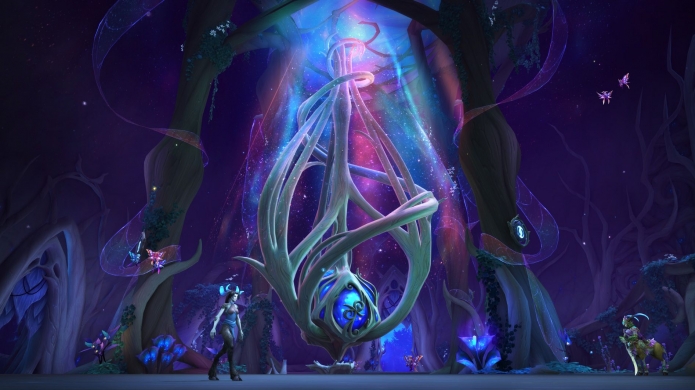 That said the team and design of Shadowloands has been tailored specifically to ensure that this alignment, this ‘My Covenant Is…’ decision isn’t the sort of thing comparable to faction allegiance. For the Horde, for the Alliance, for the Kyrian this isn’t. There won’t be any penalties for members in a group picking different Covenants, players will still be able to meet up and go about their business in the afterlife.

“We didn't want that to segregate our players,” John admits. “There are certain advantages, I'll be able to zip around and get through Bastion a little faster but we're going to have systems that allow for you and I, in a party together, for you not to suffer in my zone and vice versa. There are things that certain Covenants can do that others can't too. If you're Necrolord you get to build an Abomination, none of the other Covenants get to do that.”

“There's an R in RPG, and we want that decision to be a representation of who you are or who you want to be. With that we've tried to give a lot of flavour to the four different Covenants.”


For some that will be reason enough to join up with the Necrolords. Throughout development and fleshing out each Covenants from a design and lore perspective, there was also the possibility that new thematic rewards specific to a Covenant could skew in a single direction.

“We're going to do our best to make sure that there's no magic bullet too - this particular class, this particular covenant,” John continues, adding that this side of the expansion will be closely monitored at launch alongside the rest of the stuff grounded in numbers, buffs, chunky armour, and areas of effect. “There are a lot of complex systems, interesting permutations, especially with Legendaries where you'll have special attributes. We're going to have to stay on top of it, players are very innovative and especially in situations where a particular Dungeon or Raid might be better suited for one combination.”

The Maw Will Challenge Even the Most Hardened Veterans 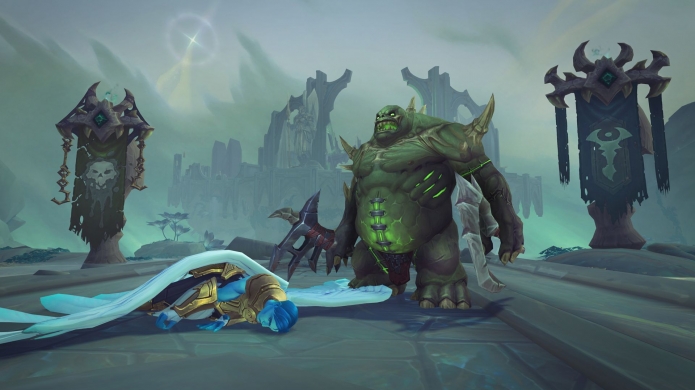 World of Warcraft is no stranger to challenge, offering players and groups lengthy journeys into places they will remember for decades. From Raids like Blackrock Foundry (Warlords of Draenor) and Naxxramas (Wrath of the Lich King), difficulty has always been there. As has triumph through adversity – and in Shadowlands a new dangerous and open sandbox environment called the Maw will keep this tradition alive. Perhaps in a way that some haven’t experienced in a while. A focus on challenge and variety, without the grind. Or, a far more manageable dose.

“It really is where we think players will be spending a lot of their time,” John says. “It’s designed for max level, you're gearing up, you're perfecting your professions. We've heard from players, even now in BFA, is that they want more variety, not as much repetition. They don't want to feel like they're grinding things. So, you know there’s a certain degree of randomness we've inserted into The Maw to break things up.”

“There will be unexpected things happening there,” John continues. “And it will be more dangerous than what people are accustomed to. They're going to die more frequently and we're going to hear people complaining, but they'll have the tools to deal with it. It isn't like they won't make any progress, but there's not going to be a point, at least not in the first year, where players are going to say that they’re over-geared for this. That they could just blast through the Maw, that it’s boring. Our goal is to make something that never gets boring.”

“We've heard from players, even now in BFA, is that they want more variety, not as much repetition. They don't want to feel like they're grinding things.”


It’s both a bold and exciting statement to make. For a game that has been around for as long as World of Warcraft and with a sizable chunk of its player-base having invested so much time into their characters and the world, expecting the unexpected and not knowing what danger might lurk around the corner is refreshing to hear.

“You are going to have certain callings that will take you to The Maw,” John explains, noting that Covenants will send players into the Maw in addition to the other locations found across the Shadowlands. With the introduction of the Maw, the team is also evolving the World Quest system to make it feel more dynamic. “We want to make sure that here it was more open,” John confirms. “It could be go run a dungeon. It could be, go defeat this near impossible challenge in the Maw. Let’s see how long you can survive. If we're in separate Covenants, we may have similar callings but it's the actual reward and maybe the victory conditions that will be different. We can still go down the Boss together, you'll get something, and I'll get something.”

“The assumption we have is that it's okay for players to die,” John laughs. “I mean, we are in the Shadowlands so we're mostly dead anyway.” Of course, he’s quick to point out that the endgame will have a lot more to it than the Maw. WoW features players of all stripes so there will be more casual, less challenging things for players to do. Which makes sense, even amidst turmoil some will want a little bit of peace to their afterlife existence. Social interaction without the need to become laser-focused on the moment to moment of a battle as the sweat beads begin to form. 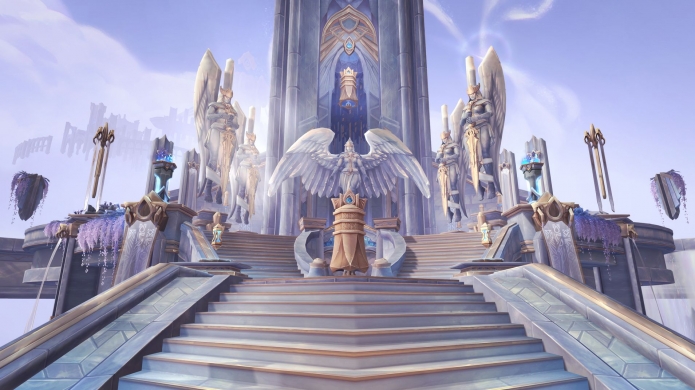 Currently in beta, World of Warcraft: Shadowlands still has a tentative late-2020 release window. As for why the team hasn’t committed to a specific date, that comes down to getting it right. With the last expansion, Battle for Azeroth, there’s an assumption within the walls of Blizzard is that it wasn’t quite given enough time to properly bake. This means more time spent quashing bugs, making adjustment, and engaging with the community to get their feedback and track exactly how its vision of the afterlife is panning out.

Weirdly, when asked about quality assurance and how that side of WoW might have been affected by the work-from-home transition, John informs me that dealing with the day-to-day issues is something that remains as strong, or stronger, than ever. “That part feels like when we were back in the office and our tools for tracking are so much better than they were 10 years ago. Everything we do is on JIRA, and we have 16 years’ worth of data. One thing we'll do on the production side is look at our trajectory, how fast are we closing tasks? How quickly are we killing bugs? How many critical bugs are there versus less critical stuff. And we're able to graphically represent that for Shadowlands versus every other WoW expansion.”

“One thing we'll do on the production side is look at our trajectory, how fast are we closing tasks? How quickly are we killing bugs? How many critical bugs are there versus less critical stuff. And we're able to graphically represent that for Shadowlands versus every other WoW expansion.”


“What that won't tell you is, how does it feel? How does it feel when you play? Is it fun?” John admits, noting that a lengthy internal testing and beta period with players, with everyone in there twisting all the knobs and pulling all the dial is a good thing. “That's why we gave ourselves a good buffer to make sure that we're playing. Heading into beta we've given ourselves a lot of time to play the game ourselves. Our players getting in there and playing and giving feedback, experiencing the endgame and all the components is crucial. And more importantly, having them see the rewards. When we went into BFA, I don't think we gave ourselves enough time during the beta phase for people to get a good feeling for that side. Is this going to feel rewarding or is it going to feel grindy? We are sensitive to that and we want to give ourselves more time to be able to look at that.”

Thanks to Blizzard for taking the time to make this interview possible.
Read more about World of Warcraft: Shadowlands on the game page - we've got the latest news, screenshots, videos, and more!
Tweet