We've taken Kratos and Atreus on an almighty journey in sequel territory. Is it as good as the OG?
Realms Apart | Our In-Depth God of War Ragnarök Review
Don't be a Stick in the Bog - Hands-On with Assassin's Creed Valhalla
Post by Steve Farrelly @ 05:25am 13/07/20 | Comments
Ahead of Ubisoft Forward, we got hands-on with Assassin's Creed Valhalla and had a chance to speak with one of the game's producers


If upon revelation Valhalla reached me on any level, it was on the promise of something new and unexplored. And it dawned on me even halfway through my playthrough with the game, that this was *kind of* what Assassin’s Creed is really all about: new discoveries of untouched cultures enriched with knowledge and riches beyond my wildest imagination. Here, in this ‘on paper’ concept of resettlement in the Isles for a nomadic peoples by way of the vikings, Assassin’s Creed finally finds its muse. An on the nose setting if you want to dig deep enough, but one that is all the way in on the sheer concept of Animus, history and formation that goes deeper than any of the games before it. And in the palms of my hands in playable form, it’s a glorious thing. 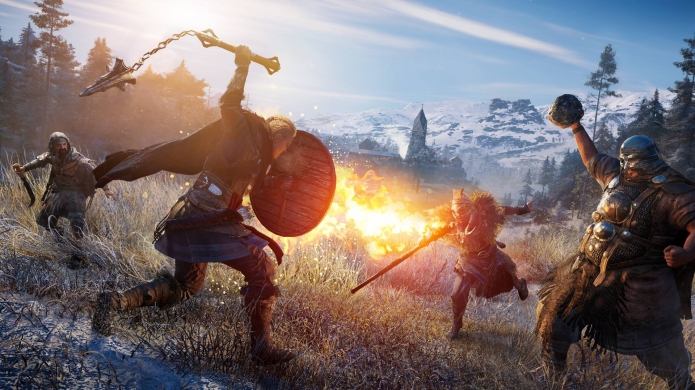 First, some housekeeping:That’s the short of my longboat ahead, so please read on if you want to know how this entry in the series separates itself from at least the last two, and why this particular entry might be the most poignant one to date.

"This was *kind of* what Assassin’s Creed is really all about: new discoveries of untouched cultures enriched with knowledge and riches beyond my wildest imagination..."


“On Assassin's Creed Valhalla there are 13 studios involved across the world,” enthuses Damien Leyris, senior associate producer from Ubisoft Singapore when I ask if this is the largest collection of developers on an Assassin’s Creed project. “I would not be able to tell you whether it's ‘larger’ or not than previous projects, but for us in Singapore [who] have been working on the brand for quite a while now, it's very similar [to the] previous projects.”

It’s poignant to chat with Damien out of Singapore -- not least because his timezone helps against my own (and so no super-late or early hookup times), but more for the impact this secondary studio has had on the series proper these past four iterations, Valhalla included.

“The historical aspect of how Vikings used the longship to travel the world and transport resources and warriors and humans… was something very important that he wanted to bring to the game,” he explains. “[Specifically] so that our players can experience what it feels, not only to fight or to live as a Viking, but also to sail as a Viking. So it was a challenge for us because when you look at Assassin's Creed Origins, the naval aspect of it is very different. The size of the ships are different. The way you use the ships in the [game] is also different.”

It’s no secret sailing any form of sea, let alone water in an open-world AC title now is par for the course, and we’re all the better for it. It’s with the tech genius of the Singapore team this is now a staple component of the series, so to know they’re as involved as the other 12 groups is beyond important. The game’s A-Studio, so to speak, is Ubisoft Toronto, but Ubisoft’s global mantra has always been one of all in. Something we’ve seen and experienced firsthand, both as games journos and as gamers on the end-user experience.

What’s important here is to highlight that Valhalla isn’t like Odyssey which was a series of islands tied together by a grand ocean, this is a largely landlocked experience with rivers and lakes and more inland waterways. This means the naval side of the game’s content is actually less naval, and more ship. If that makes sense.

"he horse and longboat are Bat-signalable at the push of a button, and the longboat is surprisingly quick on the shallow waters of the English rivers and marshes. In fact, it felt a bit too quick at times..."


“Some of our team members went on scouting trips to Europe where they were able to actually sail real longships and see how they were built,” Damien reveals. “And [so] then in the game, what we [focused] on was how the longship ties into the Viking supremacy of the seas of the ninth century; being able to navigate quickly across the rivers allowing for opportunities… to engage in activities from a very quick and ‘in and out’ aspect that the longships provide for the player.”

Speaking of, in my hands-on time with the game I gave a horse a go, my feet a go, and my longboat ago. The horse and longboat are Bat-signalable at the push of a button, and the longboat is surprisingly quick on the shallow waters of the English rivers and marshes. In fact, it felt a bit too quick at times -- something I hope is addressed in the final game. But boats don’t just help you get from A to B, as Ubsioft has highlighted, they also act as personal transport call-ins for your collected buddies along the way should a raid look on the cards that particular day. We did one such raid which was an involved affair and took a bit of time to accomplish. The rewards you gain are riches and what appears to be notoriety. However, raids are only one aspect with Assaults being another where it’s more tied to missions and narrative. On the whole though, even having these as options and distractions is a fantastic way to flesh out the game. 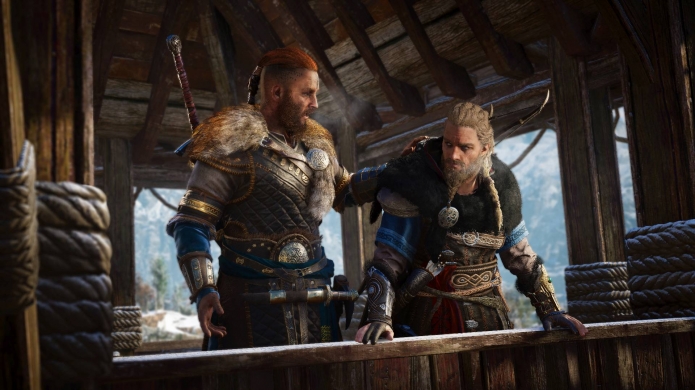 Unfortunately my hands-on did not include my most sought after aspect: Settlement building. What I can say, however, is that crafting and resource-gathering are important aspects of the game even in just general jaunt mode, let alone in full-on settlement growth mode. But you place in this new world isn’t stamped solely by the settlement, raids or assaults you do. You’ll make decisions with lasting effects, and you’ll need to chase alliances. You’re also not the only viking clan in England, and will be fighting your own kind, or bringing them on-side. None of this is to say this is just Assassin’s Creed with deeper crafting, settlements and factions, it’s also a combat beast and brutal to a fault. It was a bit messy in the form in which we played it -- full disclosure -- but if it’s all tightened come landfall, then this will be the most brutal of the series yet.

"Meanwhile, you also have your raiding party and friends in tow, allowing for the developers to truly push the group combat side of things this time around, and each of your allies has skills and abilities in varying areas, allowing for tactical recourse in how you manage them and your party..."


Moreover, combat this time around against both Origins and Odyssey feels more complete. You can see ideas taken from both, but the dual-wielding concept is amplified to the next level. Meanwhile, you also have your raiding party and friends in tow, allowing for the developers to truly push the group combat side of things this time around, and each of your allies has skills and abilities in varying areas, allowing for tactical recourse in how you manage them and your party. This wasn’t fully available to explore though, so it’ll have to wait until our next hands-on, but what I can tell you is your left hand and right hand have serious impact in how you handle individuals, mobs and bosses, while your pals certainly help with thinning out the masses. 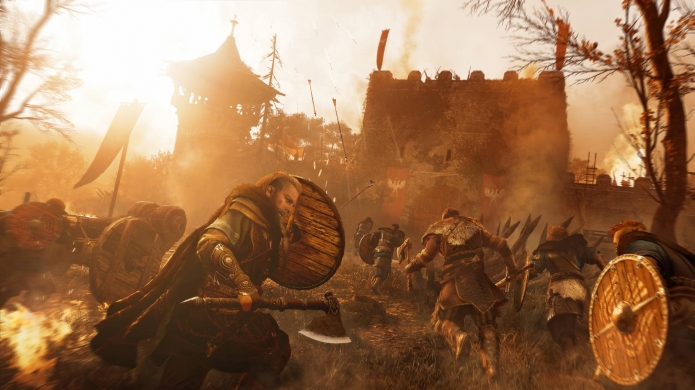 Coming back to tone, while Origins is sandy and whitewashed, and Odyssey is paradise and island-hopping, Valhalla is bog-soaked and dirty. It feels heavy, plays heavy and is heavy. We have more to peel back on this, from weapons and armour, to abilities and associations (including romance), but for now know that Valhalla is a step in a new direction, a landfall on a new location with new directives and in total line with the creed of Assassin’s Creed while also forming potential new evolutions for the series moving forward.

Read more about Assassin's Creed Valhalla on the game page - we've got the latest news, screenshots, videos, and more!
Tweet