A look at the new free-to-play Overwatch 2 and what to expect with Season at launch.
Overwatch 2 Battle Pass, New Hero Unlocks, and Seasons Explained
Death Stranding PC Preview - A Visually Stunning Odyssey by the Way of Oddity
Post by KostaAndreadis @ 10:19pm 01/07/20 | Comments
Hideo Kojima's latest looks wonderful running on a modern PC rig, but it's still as weird and strange and alluring as when we played it on PS4.


Seeing the words ‘Sony Interactive Entertainment Presents’ pop up on our PC in recent days has been nothing short of surreal, the white on black slice of introductory credit is something we’ve come to associate with a suite of high profile PlayStation 4 releases in recent years.

Marvel’s Spider-Man, God of War, The Last of Us Part II, and Hideo Kojima’s visually striking odyssey by the way of oddity – Death Stranding.

Running on the DECIMA engine, the same toolset that powered the also coming-to-PC Horizon Zero Dawn, Death Stranding presents an interesting case study. That being, the curious case of how a AAA and previously PlayStation 4-only release would look running on PC hardware. The short answer is, stunning. 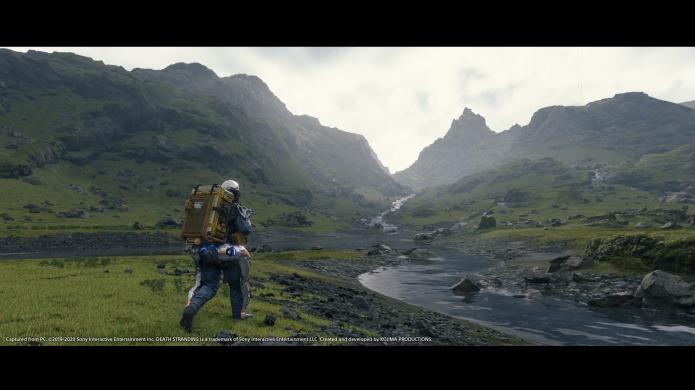 With the game’s post-apocalyptic vision of Earth having an almost photo-real quality to it. From lush grass to highly detailed rock formations, to mud and dirt and a realistic looking Norman Reedus (as Sam Porter Bridge) riding a future bike, carrying future parcels.


Outside of the loading times that feel very much like something from the console realm, Death Stranding’s PC port is exceptional. Support for various resolutions, high frame-rates, ultra-wide monitors, and both NVIDIA DLSS 2.0 rendering and AMD Fidelity FX image sharpening is here.

Plus, some tinkering of effects like shadows, depth-of-field, and motion blur. All of that and it runs smooth and feels as responsive as you’d hope. Which makes the stipulation on covering and previewing the PC version without showcasing the results via direct capture or imagery outside of what has been officially provided, somewhat strange. At least that’s what we thought.

After spending more time with Normy in his quest to deliver things with the help of his trusty side-kick ‘baby in a bottle’, it all began to make sense. Ahead of the initial release of Death Stranding on the PS4, game director (and the many, many other roles we learned he partook on the game) Hideo Kojima carefully directed and edited all pre-release material himself, or with a small team over at Kojima Productions. And so, if YouTube were to suddenly erupt with poorly edited Death Stranding PC footage prior to its release, maybe even stuff with a glitch or frame-rate dip or two, it wouldn’t simply look bad. It’d go against Kojima’s way of doing things.

Releasing in a few weeks’ time it’s safe to say that Death Stranding’s PC launch will be one that won’t require a suite of launch-day patches or post-launch bug fixing. This is pretty much the polished PlayStation 4 release, albeit with bonus content in the form of a cool Half-Life and Portal tie-in. Stuff that also sounds strange at first, but fits in with Death Stranding’s weird mix of pathos and branding.

But, back to those wonderful scenic backdrops you get to explore – and by explore we mean keep your balance as you’re trying your best to deliver packages. That’s not an exaggeration either, as per our review.

Death Stranding is, quite literally, a 40-hour series of mostly on-foot, Pan-American fetch quests. I've not seen a game this disrespectful of player time since Grass Growing Simulator 2019™.

You can forget tactical espionage action where you strive for flawless infiltrations and S-ranks. Gunplay is clearly an afterthought, too. Hell, don't even expect to get any means to defend yourself until X hours in. Your first lethal firearm rocks up at the eight-hour point, too.


And in terms of exploration through package delivery, it’s quite the looker. Through performance capture and photogrammetry carried out for years prior to its release, on an RTX 2080 everything here looks stunning and maintains a solid 4K 60 frames-per-second throughout. And with DLSS 2.0, this sort of performance will scale across the entire RTX range.

Of course, at only a handful of hours into the campaign on PC there’s plenty more Stranding to get through to get the full picture. But it’s safe to say that Kojima’s latest won’t disappoint PC fans looking to check out one of the decade’s most interesting and, well, weird big budget releases.

Another snippet from our original review.

By hour 10, I hit stage two and the absolute rut that I'd ground myself into became something of a weirdly pleasant groove. At the summit of this experience, I was stocked with cool gear and a sweet trike, all of which allowed me to either eliminate areas of BTs, circumnavigate their neighbourhoods without fuss, or just make daring bullrushes through their midst. Likewise, camps of once-feared human enemies had now become a pushover – Death Stranding doesn't even reward or punish any style of approach here, so I took to roadkilling entire villages with a truck. It beats the hell out of using guns that draw their ammo from Sam's own blood supply.


Strange as Death Stranding is, if nothing else it has a wonderful soundtrack, it sets the stage for Sony and Guerilla’s own Horizon Zero Dawn PC debut. If this is any indication that too will look stunning running on a modern rig.

Oh, and for those wondering, Death Stranding works fine when played with keyboard-and-mouse.
Read more about Death Stranding on the game page - we've got the latest news, screenshots, videos, and more!
Tweet