A slice of life full of meaning, and an Aussie made gem to boot
Wayward Strand Review
FUSER - Harmonix Sets its Sights on Festival Lights
Post by KostaAndreadis @ 11:01pm 30/06/20 | Comments
From mash-up to sampling to festival culture and dance music, Harmonix’s latest puts player choice and expression front-and-centre.


Sampling has been a part of the music scene for decades -- the hip-hop genre was born from crate digging and finding the perfect break or loop from an old recording. In the DJ space, samples have been used for almost as long. Adding production flavour and spontaneity to sets and live shows. And then there’s the remix, an entire genre born from reinterpreting music from the perspective of sampling and creative expression.

Thanks to the dawn of the age of the internet place, sampling has gone mainstream. And in typical 21st century fashion, has seen the rise of the mash-up artist. That thing where music from a wide range of genres are blended in a Frankenstein’s monster-like fashion, where the results can be hilarious or downright emotional. 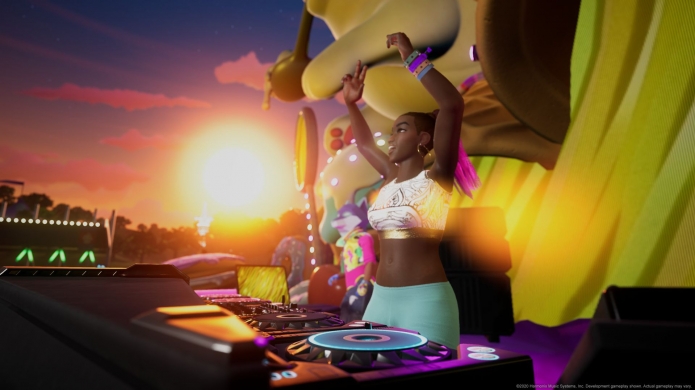 No matter how a sample is ultimately used, artists playing around with and mixing genres, or a small snippet or hook that sits alongside drum programming or a synth chord, the result is the same.

That thing that brings us all together – music – is front and centre.


Fuser, from Harmonix, is the veteran studio’s latest music game. With a long rhythm action history that began with Amplitude and Guitar Hero on the PS2, through to the release of Rock Band and Dance Central on the Xbox 360 – and countless other games in between, this is a studio that has always been steeped in music culture. Even in long and impressive discography, Fuser is somewhat of an anomaly.

No matter how a sample is ultimately used, artists playing around with and mixing genres, or a small snippet or hook that sits alongside drum programming or a synth chord, the result is the same.


In Fuser you take on the role of a DJ at a festival, an important setting that is then used as the launch pad to let creativity and choice drive the sort of performance you want to give. Blending elements and samples from a wide range of genres, a bass line from Coldplay, a beat from Armin van Buuren, the vocals from Warren G and Nate Dogg. The result is a festival performance where mash-up, DJ, and electronic music culture all blend into an intoxicating mix of groovy highs and booty shaking lows.

Dance, rock, pop, hip-hop, country and other genres are all there, Harmonix sees Fuser as festival performance open to all tastes and genres.

“We’ve had the opportunity to change the way people think about music games and have had a voice in the category for some time, but this is still a big swing for Harmonix,” Daniel Sussman, Project Director at Harmonix Music Systems tells me. “For me I see this as a step forward from an innovation stand-point, a music game that is not all about rhythm action.”

Giving players control over music without having to worry about things like tempo or key changes or whether a beat from here will work with a vocal from other there, is something of a magic trick. In that the under-the-hood stuff ensures things like pitch-bending and transposing (changing musical key) is handled long before the drop in the next sample. It all works, and by drawing from a digital crate, it’s up to you to choose what sound goes where and where you want the mix to go. It’s wonderful, and freeing. 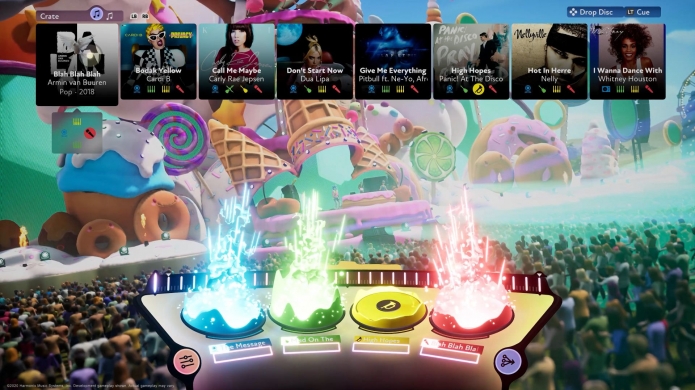 “Sample culture and mash-up culture is not a fringe or a niche, you can’t go to a show now without seeing a laptop on stage,” Daniel continues. “And that’s fine. I’m this sort of old-rock purist, so it’s been interesting to work on a game where we’re trying to present modern culture to a new audience.”

“We’ve had the opportunity to change the way people think about music games and have had a voice in the category for some time but this is still a big swing for Harmonix.”


“Trying to enable people who might not be musically inclined to feel the excitement and joy that comes from being able to create music,” Communications Director at Harmonix Music Systems, Dan Walsh, adds. “Music and musicians are the core of who we are and what we do. Harmonix as a studio was founded by a couple of music nerds and then filled out by musicians and fans of music. And we want to bring that to as many people as we possibly can.”


There are of course some rhythm elements to be found in Fuser, you will be scored on your performance and both the game and the audience will want to hear certain things – multiple beats layered on top of each other, some element from ‘song x’, a pop vocal. Instead of following commands you simply have your song selection and for each track can lay down either the bass, beat, vocal, or melody – giving each song present four variations.

“It’s pretty different conceptually from something like Rock Band or Dance Central where you are either recreating a song note-for-note or taking part in a choreographed performance,” Dan Walsh explains. “Here we can all play the same level and take a completely different musical path to get to the end. There’s no one right way to complete a mission or objective.” 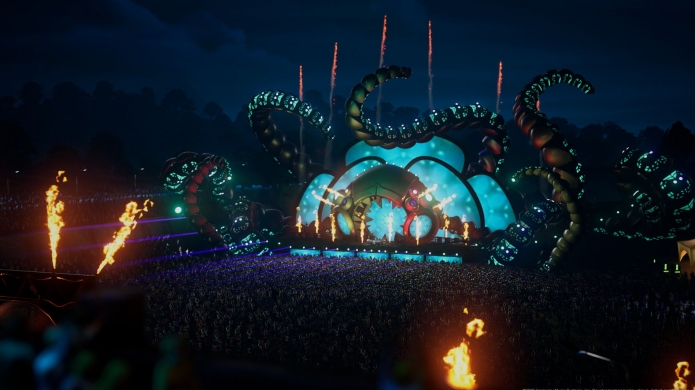 The performance side of Fuser is its key, and you can not only design and customise the look of your character (and equip them with a giant mask) but the stage, lighting, and giant floating decorations are part of the package. Presentation-wise missions represent different time-slots at a music festival – offering more creative tools as the game progresses. Play a funkier set earlier in the day to get the crowd ready, get a little dreamy and euphoric as day turns into night – the choice is yours.

The performance side of Fuser is its key, and you can not only design and customise the look of your character (and equip them with a giant mask) but the stage, lighting, and giant floating decorations are part of the package.


Although it may sound like something strictly for dance music fans, Fuser’s focus on mash-up and sampling for the performance – where the concepts are musical but nowhere near a simulation of real-world DJ-ing – is refreshing. And communal, with Fuser having a party-game quality akin to titles found throughout Harmonix’s back catalogue of hits. Being able to layer well known tracks on top of each-other, including stuff you might not normally listen too, is a joy – and a party starter.

“It’s easy for me to sound soap-boxy when I say this, but we’re making games and we want to make sure that these games are authentic with respect to the experience and culture,” Dan Sussman says. “When we’re making Rock Band or we’re making Dance Central we steep ourselves in the culture and we want to make sure that everything from the presentation to the gameplay to the character designs to... even things like the scoring model, is consistent with the focus of the game. And that’s true with Fuser.”

So true that Fuser offers a friendly nod in the direction of memes, with the inclusion of Smash Mouth’s All Star and a synth-saxophone as one of the in-game instruments.


“I love when people say that they bought a drum set after playing Rock Band, but also, I’m not disappointed when someone says they don’t play it because they play a real guitar,” Dan Sussman admits. “I love that our games can serve as that gateway to deeper appreciation or understanding of music.”

“I love when people say that they bought a drum set after playing Rock Band, but also, I’m not disappointed when someone says they don’t play it because they play a real guitar.”


Fuser starts off simple but as the festival progresses so do the tools given to you. Soon you’ll be able to cue up and create percussion lines, synth melodies, and even have access to key and tempo changes and several instruments. But in much the same way excelling at Guitar Hero won’t make you a great guitarist, Fuser follows a similar game-first approach. Getting good or coming to terms with timing and the controls is not like installing some software and pulling apart and re-arranging samples. 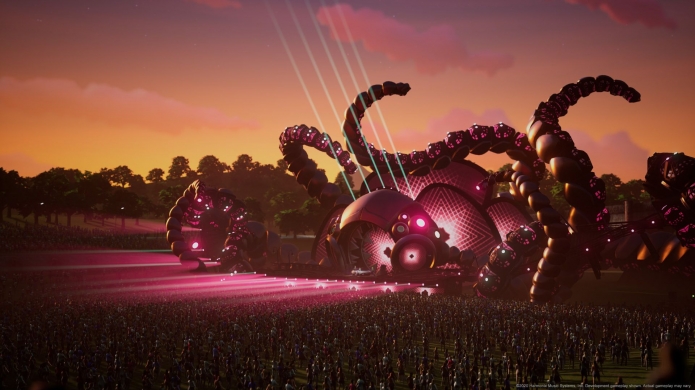 “Our focus is on the game and that person who likes music but doesn’t have any professional music gear,” Dan Sussman tells me. “Can we give people that taste of music creation, trojan horsed into the game? I expect people to extend this out to software like Ableton.”

“The challenge for us was the other way,” Dan concludes, noting that Fuser features deep and rich creation tools beyond the simple mash-up hook. “When you look at screenshots from any professional audio program, they’re intimidating. Countless small buttons and dials, so for us it was particularly important to present this from the perspective of ‘hey, anybody can do this’. We focus on elements like the stage and the performer and show that this is more performance simulation than someone in a studio. But, sneak in a surprisingly deep music creation and editing tool.”


It’s a philosophy that drives the studio and in that sense if you’re a fan of music, have listened to a DJ-set or two in the past, or can appreciate a straight up party mix, then Fuser is one to keep an eye – and ear – on.

Fuser is currently on track for a release later this year on PlayStation 4, Xbox One, Nintendo Switch, and PC supporting 1-4 players and include a day-one library of over 100 songs.
Read more about Fuser on the game page - we've got the latest news, screenshots, videos, and more!
Tweet