The latest June 2020 quarterly update on Diablo IV is a treasure trove of new info, so let’s break it down.
Diablo 4 Update – Open World, Events, Legendary Gear, and More
Cyberpunk 2077 Hands-On - A Life More Complicated
Post by Steve Farrelly @ 03:13am 26/06/20 | Comments
Our very first hands-on with Cyberpunk 2077 -- can this game truly live up to the hype? Read on for our full thoughts...


Tutorials. We live through them near ad nauseum in gaming. Some are largely warranted and welcome, others we’d rather just skip through. They’re not too unlike ignoring instructions, avoiding maps, correcting ourselves post-gaff, “oh, I meant Nolan North, not Troy Baker… I was just thinking of him because you weren’t talking about that other game, and I thought --”.

Most of the time we don’t want to admit we need them, nor feel a desire to play them. Especially when playing games of a familiar nature. Some developers know all-too-well this conundrum, but also know their games have nuance required to learn in order for us to get the most out of them, sometimes even tying them to Achievements and Trophies as incentive.

Personally, I enjoy tutorials because I see them as a way in which a developer -- more often than not out of arm’s reach -- can speak to me about their game, their intentions with it and, naturally, so I can kick off the game proper; loaded with a rudimentary understanding of structure and gameplay expectation. It’s especially enjoyable when developers get creative with tutorials, which is what I discovered the long and hard way with Cyberpunk 2077 after finally being able to get my chrome-hopeful hands-on with a game that has been digitally haunting me and every other Keanu-loving gamer these past few years.

And that preamble holds moxy in the wake of almost five hours with the game from its opening moments, almost all of which is tutorial-heavy in delivery, wrapped brilliantly in narrative agency, as semi-crafted by the player, and a world so inviting you could pass out from neon intoxication and need a dose of neondroxychloroquine, just to make it through the night.

And to say Cyberpunk 2077’s opening moments -- tutorial, story, world, action and personalisation, all told -- is dense, would be an absolute understatement. And you’ve probably already seen at least a large portion of what I’m talking about here. Our five-ish hours with the game included the same moments CD Projekt RED lead us through at E3 and Gamescoms past, only I had a bit more freedom.

Actually, a lot more. But it sure didn’t feel like it.

Still, even the small amount of chain the demo allowed me off of the main path gave rise to trepidation: if this shit is still tutorial, only I’m managing discovery of it myself and choosing my level of involvement: how deep does choice, consequence and a complete understanding of myriad systems go in a world that feel as quantifiable as π? Let’s answer that with a tutorial of our own from a preview and interview sense, in retro format;


We extensively covered Cyberpunk 2077’s official post-2012 reveal, then followed that up with more coverage, and more, and more. In fact, we’ve given our all to Night City, V, Jackie, the Nomads, Street Kids and Corpos… all, and despite an intimate knowledge of the game based on the information we’ve gleaned from CDPR, and from what the studio continues to drip feed to the information-hungry ether we still just weren’t prepared for the opportunities to learn padded throughout what can only be a tiny, tiny, tiny portion of what we’ll be able to discover in the greater spanse of Night City.

Before we get any deeper, here’s the key stuff we know: 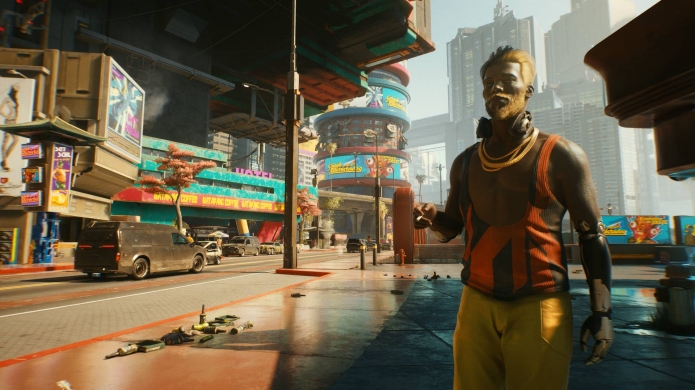 From the outset character creation shows you just what’s in store. This isn’t to some of the more full-on levels of CC available in other PC RPG outings, but what it does is allow you to craft an avatar within a retro-future framework befitting this modern take on the genre. You’ll upgrade yourself as you progress, naturally, but being able to siphon through skin tones which includes things like how many freckles your face has is… well, awesome. Add to this an incredibly well-written protagonist ever-branching script that never feels like it’s misfiring against different conversations or scenarios, and we have a game that draws you in on characterisation, personality and overall dialogue alone. This is next-level writing and delivery.

What jumped out in my hands-on was having conversations important to a task at-hand, but also being able to talk to anyone else around and have new information thrown my way not at all related to my main focus. And none of this was binary; it was intertwined and felt, for lack of a better word given the setting, “natural”.

You have three options before you get cracking on the game’s prologue: Nomad, Street Kid or Corpo -- these are class types that come with different perks and ability trees; all different ways to flesh out your character. But, more importantly, each has a different starting point, a different narrative lean and therefore unique dialogue, choices, relationships and more. To maintain a childhood and teen fantasy, I picked Street Kid and felt at home with that choice, and my V therefore started her career in Heywood, but what I found interesting was that each class truly had a unique ‘trial by fire’ tutorial experience, which is what we’ve been leaning on here. The Nomad, in particular, has an entire journey before even making it into Night City that kicks off in the Badlands and it even comes with a ye olde-school town Sheriff sporting his sheriff hat and sheriff drawl, but all wired and tech and… well, retro, retro-future.

Most games that offer some sort of ability to scan for evidence, collect physical items in relation to a scene or mission, and then deduce from all of those in tandem with storytelling, keep it on a tight string. The Batman Arkham series almost gave us what we wanted, but at the end of the day, it was breadcrumbs. The Braindance content in Cyberpunk is a combination of Strange Days and the photo technology Deckard uses in Blade Runner. An example of how it works is, say the wearer/recorder of the initial device enters a room and someone is on the phone. They move away from the wearer and therefore the phone conversation is not within earshot. Now that Braindance recording becomes available to you, you follow it through to the moment the wearer is no longer in earshot and you now untether from the first-person viewpoint and can follow the audio signal from the phone by filtering audio layers. Now you can listen in on a conversation you had no right to.

And that’s just one example. We’re going to deep-dive on this, so stay tuned for more, because we’ll have a video breakdown of how this works but, trust me when I say, this thing has ‘game changer’ written all over it.

A Tale of Two Night Cities...


We’d be remiss not to just mention how the world looks, feels and changes based on the time of day/night you’re in it and just what an actual ‘night on the Night town’ means (we made that one up). In the day, Night City throws out an industrial vibe. It’s grey and sunsoaked. The hue is almost carcinogenic, but at night the city’s neo veins come alive. I was told the final form of the game won’t have any gating and that load screens would be nonexistent. There will be cut-scenes, of course, but ultimately one side of town to another and from outside to interior will all be seamless and without a hiccup.

I saw a portion of this on display and it was impressive. Each night spot I visited had numerous peds going about their sleazy business, but you need to remember, you can chat to almost all of them, and some of them have full conversations you can spark up, but will only happen if you choose to engage. Additionally, as an aside, use your damn head phone -- you can call anyone in your contact list and get a response from them, and it didn’t appear repeated in my demo session. And we’re months out still. Suffice to say, I was impressed.

That Night City is disparate in all its moving parts with juxtaposed themes and denizens, is perfection when it comes to giving a city or hub a lifeforce. And in Cyberpunk 2077, Night City is truly your multi-faceted companion, for good, bad and everything in between.

If I had to nitpick, it would be that walking animations during drawn out conversations was slow. And V jumped a bit (you’re usually walking and listening in these moments). But it’s still such early days. I came across just a few bugs, and they were expected and even flagged to watch out for. Par for the preview course as it were. Driving was incredibly fun while just jaunting through the city felt exhilarating. I played almost all of The Witcher 3 on-foot to take in the scenery. I don’t see that changing much here, though the one car I drove was pretty damn cool, and I know we’ll get more, so maybe I’ll get my revhead on and build a livery.

The finale of my playthrough saw me locked out of further exploration and now on board for the long haul. Unfortunately that long haul is a wait until November and not a climb through the cyberpunk street ranks. But hey, we’ve waited this long, what’s a few more security checks, nanouploads, tequilas, street noodles, wheels and Eddies? Not much, and a lot, in the grand scheme.


We’ve played this type of game before, but never to this level of content. And this all comes back to density. It’s not a bad thing -- having to learn to live in this world and excel at it, is no easy feat but so far it’s fun. There’s nuance and balance; how you craft your reputation has legit ramifications but finding the various parts of what make that up, or what can make that up will test even the most hardcore of players.

Cyberpunk 2077 i’s raw and real, but it’s retro-future where you can wield both a samurai side and a futuristic fully-automatic weapon, while looking as cool as all get up, so, you know, we’re all the way in.

Stay tuned because we’re sitting on a neon-lit goldmine of content from our session. And remember this one little bit. All we really played in those near five hours, and with all of the above (sans content-to-come), was effectively the game’s tutorial.

This is gonna be one helluva ride.

Read more about Cyberpunk 2077 on the game page - we've got the latest news, screenshots, videos, and more!
Tweet