Hideo Kojima's latest looks wonderful running on a modern PC rig, and it's still as weird and strange and alluring as ever.
Death Stranding on PC - A Stunning Odyssey
The Power to Work, The Desire to Play
Post by KostaAndreadis @ 02:40pm 26/05/20 | Comments
How NVIDIA Geforce RTX powered laptops empower you to make your home a place of work, play, or something in-between.


More people are working from home than ever before, so looking for the right tools and technology to keep productivity up - and those communication channels open - has become a pastime in and of itself. The rise of Zoom, Teams, desktop sharing and demanding Adobe tasks, means more and more stuff is happening in the locations usually reserved for comfy couches and Netflix subscriptions.

It’s this versatility; the ability for a device to be taken on the go or into any room, that has seen interest in laptops rise. That, and the fact that portable graphics are now virtually on par with full desktop-sized machines. Graphics hardware is an area NVIDIA has been an industry leader for some time - its GeForce RTX line, powered by Turing architecture, has ushered in the arrival of next-gen real-time ray-tracing effects and advanced AI-based rendering in the games we play. The company’s latest graphics revolution, though, comes in the laptop space. 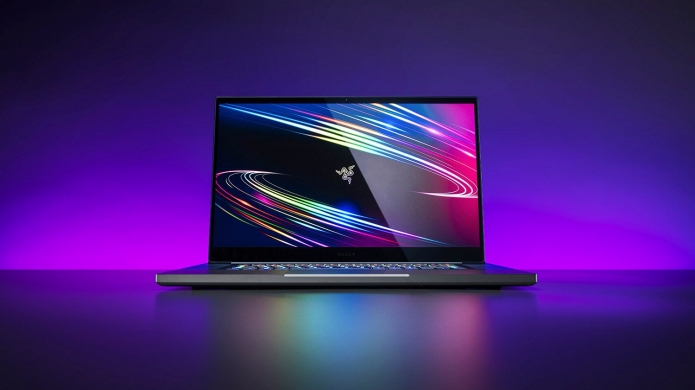 The New Razer Blade Pro is Powered by GeForce RTX

With devices powered by new GeForce RTX SUPER with Max-Q technology, we see cutting edge features that not only improve performance but also keep a digital eye on things like battery life. Dynamic Boost automatically shifts power between the CPU and GPU depending on system requirements on a per-frame basis, while memory speed increases and voltage regulators help keep things running more efficiently.

The dual nature of NVIDIA’s laptop GPU range is where the bigger picture becomes apparent. For every ray-traced Minecraft with RTX jungle you can build or explore, for every secret underground facility you need to work your way through in Control, NVIDIA Studio is there to offer faster and more responsive productivity. From cutting down the time it takes to complete tasks, to providing smarter AI-driven alternatives to previously manual tasks.

Inside the NVIDIA Studio 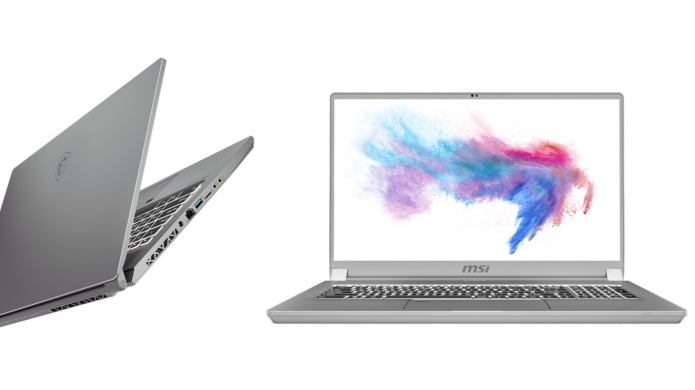 The stylish and sleek MSI Creator 17

There was a time when the home office existed in its own dedicated space. Based on size alone it needed to; a desk, beige computer hardware, and old timey technology like ink-jet printers, fax machines and monitors as heavy as a pile of bricks. In 2020 the ultra-book or laptop designed for productivity and portability is well and truly a mainstay, offering a suite of tools and apps for anyone looking to get some work done.

The power of modern laptops allows any household location to become a place of work. The quiet bustle of a kitchen counter, the corner office intimacy of a bedroom, or the Zen-like calm that comes from a desk overlooking a garden. But, there’s a common misconception in the laptop-as-a-work-thing space. And that is, your bag-shaped machine doesn’t need to have dedicated or discrete graphics. That’s only for those that want to play games.

Created in collaboration with partners like Razer, MSI, and Gigabyte, what you get is powerful GeForce RTX graphics and custom NVIDIA Studio drivers designed to maximise performance and workflow across multiple apps. And all inside sleek and beautiful designs paired with vibrant and responsive displays. 4K, with colour output good enough to edit a major motion picture. 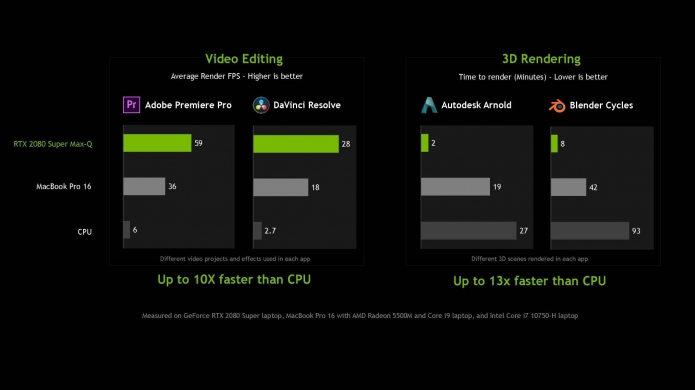 One look at the NVIDIA Studio range and you’ll notice a design philosophy quite different to, say, a laptop designed purely for gaming. The subtlety and elegance in a lot of ways is a (ray-traced) reflection of NVIDIA’s own GeForce RTX technology. Where powerful AI hardware and cutting-edge graphics architecture can be utilised for seamless 8K video editing and playback, automatic colour grading and more. For creators, streamers, graphic designers, and those of us that simply attend virtual meetings with or without pants (no-one can really tell), NVIDIA’s GeForce RTX technology offers improved speed, reliability and performance.

For streamers and those that capture video, NVIDIA’s hardware encoding not only happens faster than the software approach, but the results are cleaner and crisper, they’re easier to edit or simply broadcast out into the world. Multitasking across multiple apps is a breeze with NVIDIA, its Studio Drivers are optimised and ready for a range of demanding apps – including the entire Adobe Creative suite, Autodesk Maya and 3DS Max, Blender, OBS, Xsplit, and others.

As seen in the Razer Blade Studio Edition, Gigabyte AERO 15 OLED, and MSI Creator 17, GeForce RTX technology is paired with powerful processors, ample memory and fast SSD storage. A certified NVIDIA Studio laptop is exactly that - an entire studio. A device where each piece is of a certain quality. A device that immediately turns any location into a professional production suite. 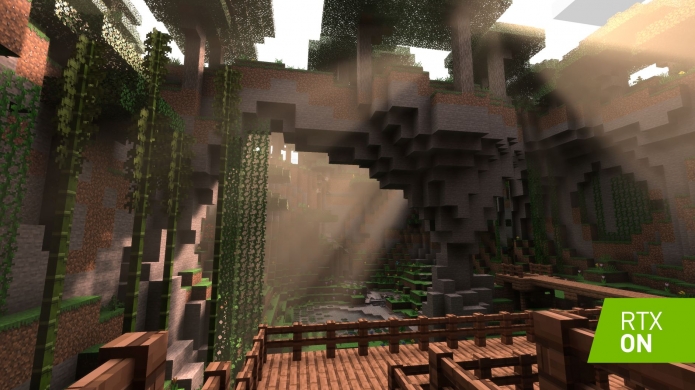 In the age of social distancing and working from home it’s important to remember that playing games is not simply a form of distraction or entertainment – it can provide some much-needed digital therapy. Recent studies have shown that over two-thirds of Australians play games, with most gamers being of working age. Digging a little deeper we find that around 74% of people agree that playing games have contributed to their emotional well-being and almost 67% used gaming to maintain social connections (according to IGEA's Digital Australia 2020 report). To summarise, a laptop used for work can now also be used to play which is, well, the very definition of multitasking. Or at least it should be.

Powered by NVIDIA GeForce RTX hardware, including the new GeForce RTX 2070 SUPER and GeForce RTX 2080 SUPER with Max-Q GPUs, every NVIDIA Studio laptop is a simple point and click away from becoming a gaming powerhouse. Dim the lights, double click on Call of Duty: Modern Warfare, hop into a Discord chat with friends, and air-drop into a sandbox of digital destruction.

So then, what separates an NVIDIA Studio laptop versus something designed purely for gaming? Well, outside of dark metallic finishes, RGB lighting on a mechanical-like keyboard, and boot-up sounds that give off the impression you’ve just turned on Skynet, the difference usually comes down to the display. 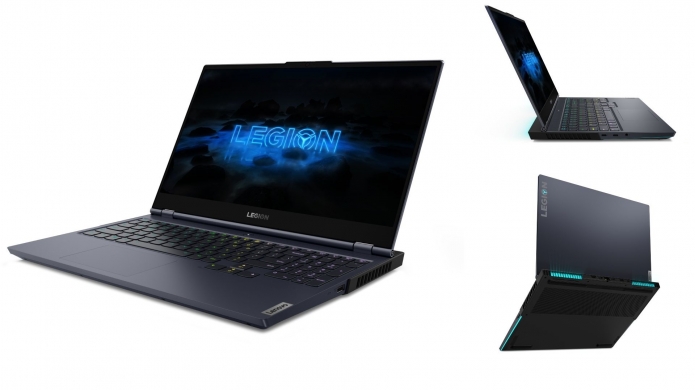 With high refresh-rates and G-SYNC support, there’s a good reason the new Razer Blade 15 goes all the way up to 300 Hz. With titles like Apex Legends, Call of Duty: Modern Warfare, Rainbow Six Siege, Fortnite, and others, NVIDIA has found that player performance across various skill levels improves the higher the in-game frame-rate. Now, even though that may sound a little bit like marketing speak, NVIDIA has the research data to back it up. Plus, it helps when you get to witness the effect in real life. Over time a laptop with a GeForce RTX 2070 or 2080 SUPER, pushing those higher frames, can mean the difference between capturing the point or sitting there wondering where that stray shot came from.

And with DLSS 2.0 enabled, performance is smoother, crisper, and more power efficient to boot.

DLSS or Deep Learning Super Sampling is NVIDIA’s version of that age-old technique called upscaling. Except this time, powered by advanced AI and the Turing architecture found in the GeForce RTX line. Like a digital magic trick DLSS 2.0 allows for the entry level NVIDIA GeForce RTX 2060 to render highly detailed ray-traced scenes in Control, MechWarrior 5, Wolfenstein: Youngblood, and others in high-definition. With no loss in detail and with a sizable performance boost – leading to frame-rates in the smooth 60 frames-per-second range. 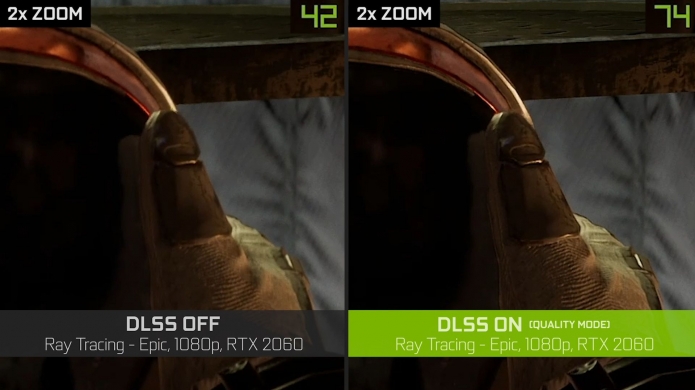 Better performance and picture quality, DLSS 2.0 and AI Rendering is the future

Shift that to the GeForce RTX 2070 SUPER and the result is performance that only a couple of years ago would be viewed as impossible. DLSS 2.0 represents the latest version of the technology and something that unlike the first release doesn’t require certification or pre-qualification to enable in game by developers. A fact that should see the number of titles supporting DLSS 2.0 grow as time goes on.

With the ASUS ROG Strix SCAR 15, MSI GS66 Stealth, and new Lenovo Legion 7i hitting the market, the 2020 gaming laptop has been given a notable boost in the performance department thanks to the new SUPER GPUs and technology like DLSS 2.0.

On the true cutting-edge, the Lenovo Legion 7i takes things one step further with the adoption of NVIDIA’s brand-new Advanced Optimus technology. A term that in addition to doubling as a good name for a new line of Transformers toys, pairs with NVIDIA’s industry leading variable refresh-rate G-SYNC technology. Advanced Optimus allows for true dynamic GPU optimisation that intelligently drives a display to switch things up as needed, and to save battery life and improve overall performance across games and apps.

Actions as they say, speak louder than words. Even without reasonable knowledge of exactly what is happening inside the vapor chamber cooling of a high-powered NVIDIA GeForce RTX 2080 SUPER-powered laptop, the results speak for themselves. Real-time video editing with advanced AI effects compared to a device that simply lags, speaks louder than any spec-sheet ever could. Seeing smooth tear-free triple-digit performance in Rainbow Six Siege. Turning DLSS 2.0 and RTX On in Control to witness the future of visual fidelity that is real-time ray-tracing.

With an NVIDIA-powered laptop, these actions can take place anywhere you want. Where a simple table can become an editing suite by day, and the scene for international armed conflict resolved by throwing combatants out of aircraft by night.