Thanks to the Bethesda ANZ, we've got an amazing custom The Elder Scrolls Online Xbox Series S console pack to giveaway in Australia!
Win This Amazing Elder Scrolls Online Xbox Series S Pack
DOOM Eternal Preview - A Genre Defining Revelation
Post by KostaAndreadis @ 02:00am 22/01/20 | Comments
After spending three hours with a near-final build of DOOM Eternal, we discover that id Software has been quietly building a stunning genre-defining experience that could potentially become the high watermark for the FPS genre.


Part of context comes from where you find it, experiences from the past, memories from something notably different, earlier incarnations dating back years or decades. For DOOM Eternal, which is being billed as a direct sequel to id Software’s breakout reimagining of the series from 2016 – one could easily point to that game’s throwback-feel to the simplicity and form of the 1993 original. The dawn of the first-person shooter.

Where a laser-guided focus on combat resulted in mechanics and weapons and action that was in full support of a simple ideal. To rip and tear demons. A robust first-person shooter and a release that was at once familiar and refreshing.


15 minutes of gameplay from DOOM Eternal


After playing through a lengthy section of DOOM Eternal’s final campaign (about three hours all up) there was a sense that this could have been a sequel in the traditional sense. A sentiment born from the impressive ambition and scope we saw in the game last year, where elements return but are expanded upon. New stuff found around every corner, but with a look and feel that is still every bit DOOM. As a movie poster might tell you – ‘Bigger and better, the Slayer is back!’.

On that note DOOM Eternal is a revelation. Almost overwhelming in its scope and seamless execution of pure first-person action. An experience chock full of genuinely fascinating ideas of how a first-person shooter can play. Or could. With story, level design, platforming, and intuitive puzzles that feel like they belong. Familiar and refreshing and unlike anything else in the shooter space.

“DOOM Eternal is a revelation. Almost overwhelming in its scope and seamless execution of pure first-person action."


Going back to context, the experience reminded me of Nintendo going 3D with The Legend of Zelda and Metroid, and to an extent Super Mario 64. Outside of the new traversal mechanics that combine a double-jump and double-dash with gauntlets that let the Slayer scale walls in sections that can only be described as 3D Platformer, quite a lot of DOOM Eternal feels like it was developed by the iconic Japanese house of videogames. DOOM by Nintendo, where the animated violence is as intense and gory as ever, the soundtrack as pulse pounding as it is musically engaging, but now with level design and intuitive set-pieces that are as slick, fluid, fast, and frenetic as the action. 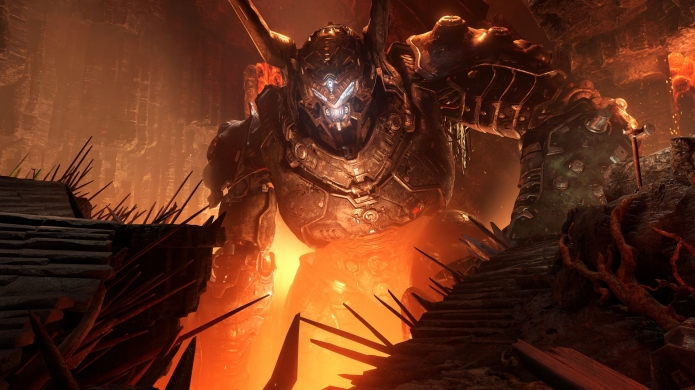 After thinking about it for some time it could be said that DOOM Eternal succeeds because it embraces its true nature as a game. Everything feels like it belongs in a videogame. A brilliant first-person shooter videogame – but a videogame nonetheless. When viewed this way each element of DOOM Eternal, and there are a lot, make perfect sense. And sure, saying something like DOOM by Nintendo is reductive and a little silly – but that’s about as high a praise as someone who grew up playing the Big N can bestow on a studio like id Software. Technical wizards with peerless attention to detail that can now add world-class single-player designers in total command of their artform to a hypothetical bio.

Perhaps the most immediate change or evolution in DOOM Eternal comes with the environment design and how the thematic and visuals changes add new layers to the franchise – what was once industrial meets hellish lava and fire now has a sizable dose of gothic alien ruins, post-apocalyptic Earth, and the err, ice world. How each new location intertwines with the mechanics is nothing short of genius. 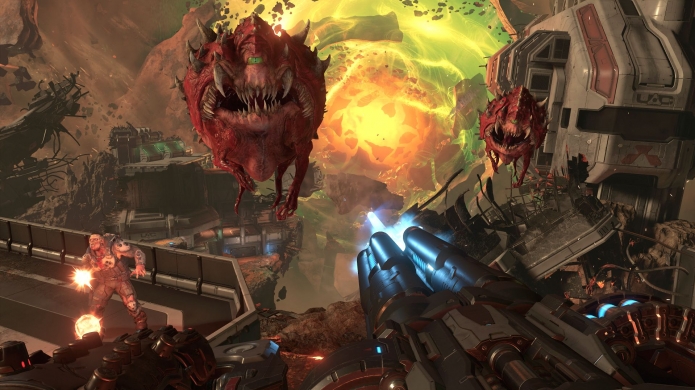 Combat arenas that start off small begin to grow, and as new weapons and enemies are introduced the combat itself begins to take on an unprecedented strategic and tactical flair. Chainsaw enemies to regain ammunition, Glory Kill executions for health, set demons on fire for armour, use the environment for cover, and always keep moving. It’s the evolution of a style first seen with id’s own work with Quake. Railgun and rocket launcher skills from Q3DM17 apply in DOOM Eternal, especially when launch pads appear and you can swing from bars and use portals to zip around an Arena – but this is all, as one might say, next level.

“Combat arenas that start off small begin to grow, and as new weapons and enemies are introduced the combat itself begins to take on an unprecedented strategic and tactical flair."


The Super Shotgun’s flesh grapple Meat Hook is enough of an idea to build an entire game around, in DOOM Eternal it’s simply one small piece of a diverse arsenal that all serve specific purposes. And like with most of your potential arsenal, weapon upgrades, and equipped Runes that can activate slow-motion whilst in mid-air, it encourages the sort of daring behaviour worthy of a one-man army charged with saving the universe from being overrun by demons. Where superhero-like manoeuvres sound great on paper, but also present the risk of outright failure. 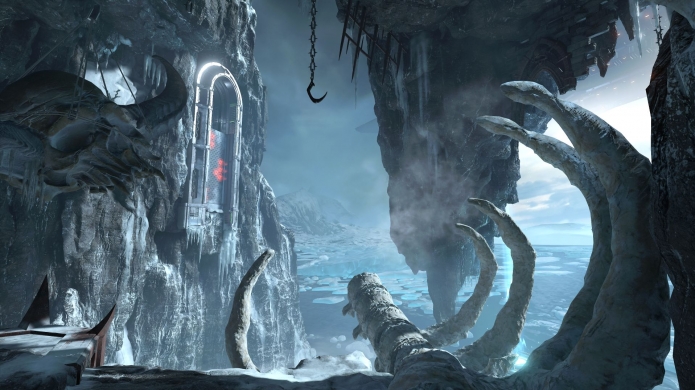 Each death a lesson, no stray bullet or look of confusion will creep into your understanding and physical expression of what just happened. With Glory Kills and fast-paced movement there’s a highlight-reel quality that is inherent to DOOM Eternal, and in a strange way each demon encounter that ends in evil walking away triumphant kickstarts a slow-motion and multi-camera replay with full colour commentary in your head; ala King, Madden or even homegrown talents like Spud Frawley. Where, continuing the metaphor, your brain will take on the role of Al Pacino in Any Given Sunday to lay out a new play-by-play and a new plan, wrapped up in a rousing speech as each player – two hands, one on a keyboard the other a mouse – get up and rush back onto the field.

New traversal sections, the quieter moments and bits between all the demon-slaying are given the same treatment – where learning a new ability not only offers up ample room to work through the kinks through level-design as tutorial but also expand the scope with off the beaten path discoveries and secrets. Stuff like finding a 1-Ups, DOOM Eternal’s most videogame element – alongside the beakers full of Aunt Beru-style Blue Healing Juice – initially seems a little over-the-top but quickly becomes a valuable lifesaver and potential strategic tool. This battle is full-on so with these few extra lives maybe now’s the time to take bigger risks. 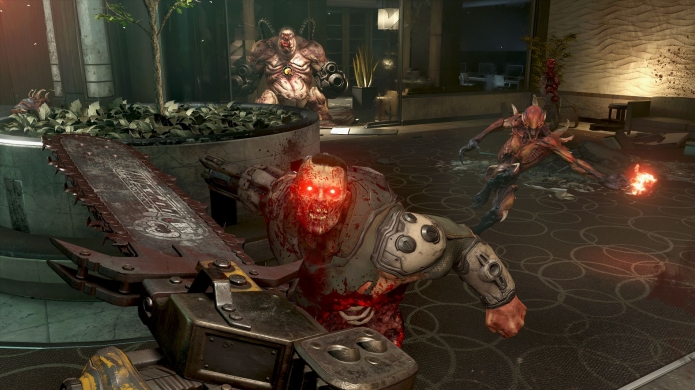 The evolution over DOOM (2016) that comes into play can be felt almost immediately, in that the sense of repetition and eventual stagnation from the original is gone. Not simply due to the changes in colour palette or fancy background detail you’ll notice every few minutes, where you’ll begin to see giant demons walking in plain sight or in sitting there in menacing ancient statue form. Gameplay comes first, and here the way it plays is as diverse as the line-up of demons, environments, floating platforms found over lava, and ancient gothic castles full of high-tech plasma doo dads.


There’s more story than we’ve seen in a DOOM game before, but even this is implemented in a precise cookbook measurement of two teaspoons of lore at regular intervals. Never overshadowing the combat or exploration this newfound sense of a DOOM-iverse is weirdly only a small part of the picture, adding tension to combat, mystery to exploration, and above all – building up the Slayer’s mythos in a way that’s pure videogame in design and execution.

There’s no pretension on display, no cinematic ambition beyond the satisfaction you get from playing the game, and realism is nowhere to be found. And having said that, DOOM Eternal is on track to become one of the most talked about shooters in years. 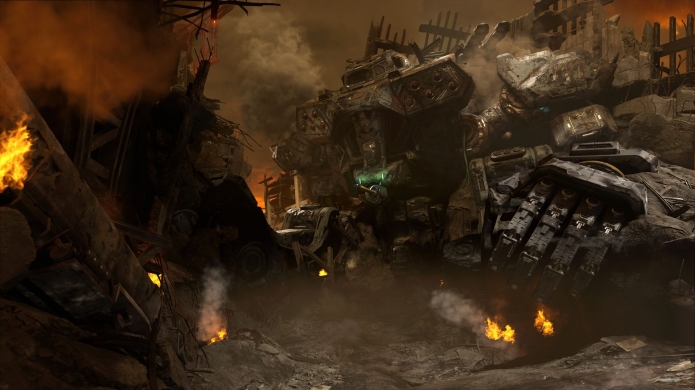 id Software describes DOOM Eternal’s combat as a puzzle you need to solve, or at the very least be aware of. Moving beyond the age-old wisdom inside us that dictates a double-barrel shotgun at close range equals meat chunks and a rocket launch at distance will do the same – the puzzle here is more than looking for an enemy’s weak spot. For every Zelda-like use of the Plasma Cannon to burn away a Carcass demon’s shield to have them explode, or launch of a sticky bomb into the red and blue piehole of a Cacodemon so you can swoop in to perform a Glory Kill in mid-air – there’s an overall level of battlefield awareness required. Watching enemy movements, figuring out pathways, and using weaker demons as stepping stones or strategic walking resources to call upon as time goes on.

The best part is that combat in DOOM Eternal is unpredictable, no two encounters feel the same. What worked one minute might not work the next due to a change in how a level is physically laid out, the types of demons thrown at you, the AI at play, or environmental puzzles that add a new element to consider.

Then there’s the presentation and underlying id Tech 7 engine, which on PC looks nothing short of stunning – the perfect blend of raw detail, lighting, visual effects, animation, destructible demons whose flesh falls apart the more you shoot, and rock solid performance. id Software’s technical skills were never really in question – so take this brief aside as confirmation that on that front it’s business as usual. And business is good. The sheer splendour of the art direction and environments push id in what feels like a new and bold direction.

“DOOM Eternal is on track to become one of the most talked about shooters in years."


Bringing things full circle and the use of the phrase “almost overwhelming” - that refers to both playing DOOM Eternal and talking about its mechanics and features and elements without simply referring to or reading off a giant dot-point list. Even as a sequel there’s been nothing quite like this, a shooter so full of ideas and variety that you wonder why this wasn’t the direction the genre went when we traded sprites for polygons. So, let’s get straight to it – DOOM Eternal is a game that re-defines the genre. And befittingly it’s the team at id Software at the helm, putting on the Slayer's helm.
Read more about DOOM Eternal on the game page - we've got the latest news, screenshots, videos, and more!
Tweet