A great option for those looking for a dedicated headset for Xbox console gaming.
Xbox Wireless Headset Review - Affordable Wireless
Minecraft RTX – The Building Blocks For a Bright Ray Traced Future
Post by KostaAndreadis @ 01:37pm 24/10/19 | Comments
Going hands-on with Minecraft RTX we immediately knew we were witnessing something truly special.


Over the years Minecraft has become ubiquitous in tens of millions of households across the globe - playable on just about any platform. With a focus on player freedom and creativity, it distils the building blocks of what makes videogames so engaging into an easy to understand experience - quite literally.

When NVIDIA announced that it was partnering with developer Mojang to bring real-time ray tracing to Minecraft – the initial reaction was rightfully met with some slight confusion. Ray tracing as part of the hardware maker’s line-up of Turing-based NVIDIA GeForce RTX graphics cards, is mostly seen as next-gen technology. Highlighted by the tech’s implementation in visual spectacles like Battlefield V, Shadow of the Tomb Raider, Metro Exodus, and more recently Remedy’s Control. The latest blockbuster to get the RTX treatment being this month’s release of Call of Duty: Modern Warfare.

All offering glimpses at the sort of cutting-edge graphics and visuals we’re likely to see become the norm in the coming years. 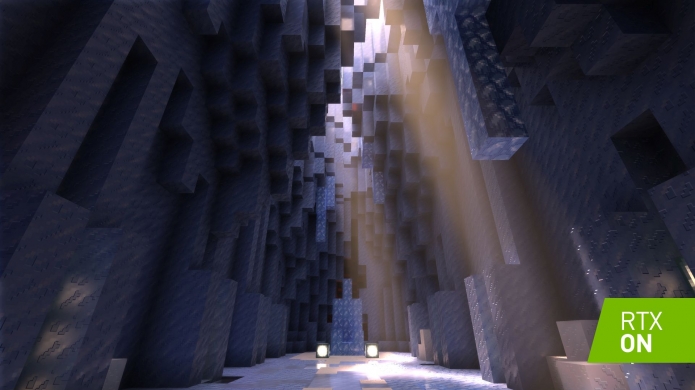 That said, after going hands-on with the upcoming Minecraft RTX update at PAX Australia – it’s use of ray-tracing for all lighting is without a doubt one of the most impressive demonstrations for what the tech does and can add to an experience. It’s an effect that doesn’t really require much if any technical understanding of the methods and techniques used to appreciate. From shadows to reflections to global illumination to the way light reflects and bounces around the environment - it changes Minecraft in a way that makes it look and feel like an entirely new game.

"... it’s use of ray-tracing for all lighting is without a doubt one of the most impressive demonstrations for what the tech does and can add to an experience.”


A high-end tech demo that could double as Pixar’s Minecraft. What was yellow now becomes gold, shiny, and reflective. Lava now emitting light onto surrounding objects, fire too. With everything updating in real-time as the world is built-up or broken-down, Minecraft RTX is like watching a magic trick – albeit one built on complicated mathematical calculations that would have been impossible to pull off even just a year or two ago.

In fact, being able to toggle the effect on and off with a simple press of a key reminded us of LucasArts’ remastered version of The Secret of Monkey Island from years ago. Where one could seamlessly shift between the low-resolution VGA graphics from 1990 to that of high quality and high-resolution hand-drawn backdrops and characters of the 21st century. But where that release essentially stored two versions of a game in one package – Minecraft RTX simply turns the ray-tracing effects on or off. 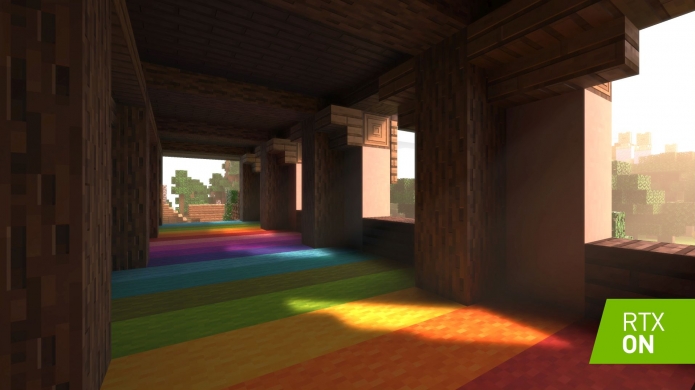 The drastic and stunning difference comes from offering a version of Minecraft with realistic lighting, shadows, and reflections. The sheer beauty of it also comes down to the simple, angular, vibrant, and timeless look of everyday Minecraft. Where clean angles, contrast, brightness, and colour blend with simple textures and a nod to the pixel-heavy history of videogames of old. There’s an accessibility to the look of Minecraft, which NVIDIA uses to its advantage.

"Real-time ray-tracing as depicted here will one day become the setting developers can simply turn on or off too in any game.”


The iconic building blocks of Minecraft offer up a malleable world to be built up or set on fire, which immediately highlights that what you’re seeing is not static. Real-time ray-tracing as depicted here will one day become the setting developers can simply turn on or off too in any game - removing the need to individually light each scene, fake a few high-end effects, or dive into each texture or corner of a level to make everything looks as realistic as possible. Or, you know, not completely broken.

In developing Minecraft RTX, NVIDIA has introduced various types of surfaces to blocks to allow for realistic and reflective windows, metallic cubes that shine and refract light, neon cubes that glow, and water that looks incredible. As weird as talking about how great the water looks in Minecraft can be, it’s a testament to the full-scale implementation of ray-tracing on display here. Like with the recent Quake II RTX update, Minecraft RTX offers complete ray-tracing, replacing all lighting and related effects across the board. 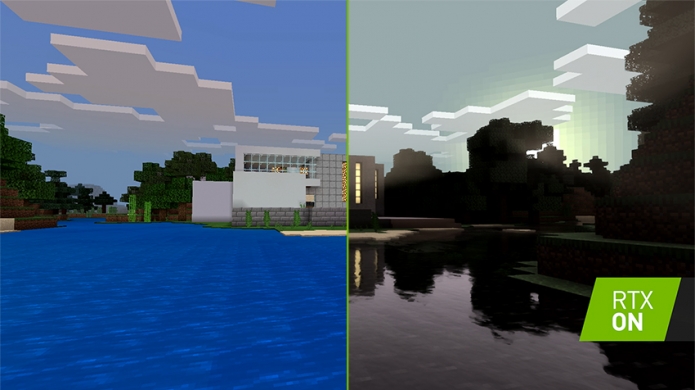 In the end its worth going back to the game in question – Minecraft. A game that has been tinkered with by enthusiasts for as long as it has been a thing. Where projects often boggle the mind in terms of their complexity, scope, and ambition. Minecraft is one of the most modded games in existence, and the RTX update being free to all players will allow creators use the stunning new technology in ways we haven’t seen before.

This makes its eventual release sometime early next year somewhat monumental in helping shift the visual quality of videogames into the 21st century. And as much as we adore getting to witness AAA blockbusters bring in ray-tracing to expand the cinematic qualities of interactive stories, it’s projects like Minecraft RTX that speak to the core of what gets us all to game in the first place. A celebration of the creative spirit.

Now reflected, glowing, and obscured by shadow; with perfect clarity.

This article is sponsored by ASUS.
Read more about Minecraft on the game page - we've got the latest news, screenshots, videos, and more!
Tweet