World of Warcraft is currently celebrating its 15-year anniversary, which for a game still being played by millions is something to be celebrated. Over the years the quintessential MMO (massively multiplayer online) title has seen several major expansions, countless balance changes, visual overhauls, and updates. The most recent major expansion, Battle for Azeroth, is currently telling new and fascinating stories using races and locations – the underwater Naga and an eccentric group of Goblins – that we rarely see in the Warcraft universe.

But no matter where you go in modern World of Warcraft – every mountain, tree, riverbed, and building carries with it the torch of a world that has seen years of conflict, strife, cataclysm, and renewal.

With fans asking to return to a time within Azeroth that represented something akin to the early days of playing World of Warcraft, Blizzard has finally responded with the release of World of Warcraft: Classic. A version of the game that now exists simultaneously alongside modern-day WoW, representing a post-launch period of the game dating back well over a decade. A project that in and of itself has been a major undertaking for the team, treated with the same level of attention and care as the release of a large expansion.

Part re-release and part re-make, the journey to recapture the past has seen the old integrate with the new.


“The thing to remember with WoW, is that a World of Warcraft Server isn't just what you log-in and play with,” Omar Gonzalez, Senior Software Engineer at Blizzard and veteran developer who has been with the studio for 16 years, explains. “This is a system that has to interact with other systems throughout Blizzard, like our login and account management systems which are managed by our Battle.net team. They also need to interact with customer service departments and their systems. Even back then we had those systems in place and the game portion never operated in a vacuum. So, it was never feasible to think about just dusting off that piece [of old hardware] and expecting that to work. That was going to be a dead end.”

With fans asking to return to a time within Azeroth that represented something akin to the early days of playing World of Warcraft, Blizzard has finally responded with the release of World of Warcraft: Classic.


This is also in response to the question that the studio has been fielding for years when asked about bringing back classic or old-school World of Warcraft. It’s not a simple matter of version control. Roll-back some software and hardware, plug it all in, you’re now good to go. “It wasn't until we spent some time talking about what else we could do,” Omar continues. “That we played around with the idea of taking the old data, the old information, the thing that makes the old quests, the old monsters, the old way and run it on top of our modern tech stack. Once we did some R&D and prototyping, this actually bore fruit and gave us the confidence we needed to both deliver what players remember about WoW and to still provide it as part of the Blizzard online service that everyone expects.” 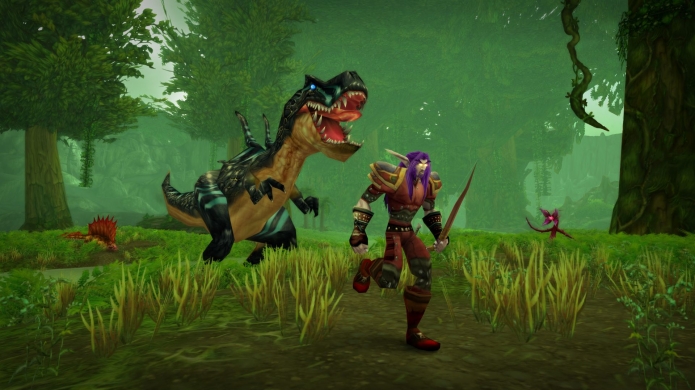 Taking advantage of where World of Warcraft technology is today, this approach had the added benefit of be supporting modern hardware and software. In the process avoiding potential conflicts that could arise from firing up a game from the year 2004 – one that ran on Windows XP. Of course, merging the old with the new brought up its own set of challenges. “I'll give you an example of a bug that we found in our development,” Omar tells me. “I don't know if this appeared in Beta, but with Hunters, if you unsheathed your weapon with a quiver on your back in just the right order, you would put your quiver in your hand. That was funny because you were hitting people over the head with your quiver instead of your axe or whatever you had in your main hand. We encountered many issues like that, and it was technically challenging.”

At a very basic level old data running on new hardware or systems, won’t behave exactly as it should. Even though the process of firing up the old servers and data wouldn’t work from a release perspective, this was exactly the way Blizzard was able to reference classic Word of Warcraft while working on the project.

"We played around with the idea of taking the old data, the old information, the thing that makes the old quests, the old monsters, the old way and run it on top of our modern tech stack."


“In terms of like making a reference point to compare all of this to,” Brian Birmingham, Lead Software Engineer at Blizzard explains. Another veteran who has been with the studio since 2006. “We did have the code, the data, the art. So, we could just build those up again and run them internally and know that this is what WoW looked like back then. And so now we have the old stuff running inside a kind of stuff snapshot where it doesn't really work or interact with our customer service tools or anything like that. But we can still compare the gameplay footage to confirm what it's supposed to do. And if there are bugs, be in a position to make that work in our modern technology.”


That said, getting all the old code, the old data, the art and assets into a single location wasn’t a matter of opening a virtual or physical folder. Due to studio practises the code-base for World of Warcraft Classic, which represents Patch 1.12 of the original release, had been maintained with detailed and excellent version control for the team to reference. “That goes back to a time before World of Warcraft development began,” Brian continues. “I wouldn't say it’s perfect, we have little gaps here and there, but we do have snapshots at various Patch levels of what was going on.”

“The analogy I use is that of a messy warehouse,” Omar adds in reference to non-code related materials. “What you're looking for is in the building, where it is in that building, well, it's going take some digging to find it.” An apt analogy that captured the process of digging up the older art assets. 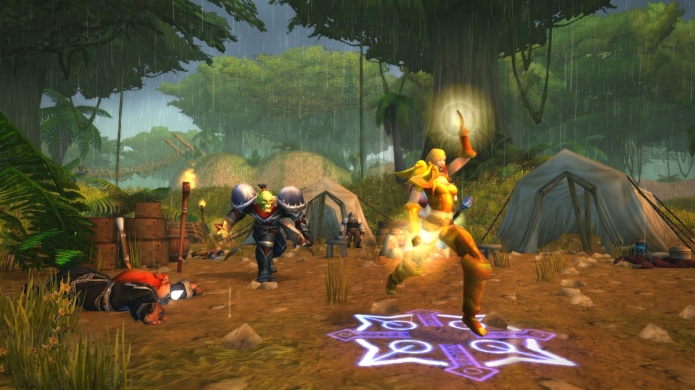 “We were really aiming for that feeling, that specific feeling of running around shooting monsters, casting spells, swinging your sword,” Brian tells me. “That ceiling, those numbers, that tuning. And then that also extends to the art assets. We brought back all the original art assets, the models, the textures. So, everything ought to look like it did back then. And the art assets were one of the most challenging [to dig up], but when we found them, we found the whole set. We found the art on a backup of a backup, a tape drive we restored and on it was a folder named ‘back up’.”


Clearly World of Warcraft Classic has been a major undertaking for the team, albeit a very different one in terms of focus. With the goal being to capture the look and feel of old-school World of Warcraft the phrase ‘close attention to detail’ takes on an epic quality. Where extensive internal testing and Beta testing with the community has meant that no detail was too small to ensure Classic lived up to that memory. The reality of playing World of Warcraft in the mid-2000s.

"We were really aiming for that feeling, that specific feeling of running around shooting monsters, casting spells, swinging your sword. That ceiling, those numbers, that tuning."


“There is a difference in terms of whether we think something is good or bad and for this it’s not as important as whether it is accurate or not,” Brian confirms. “We are trying to recreate something that existed in the past. So, that does put a different spin on things where sometimes you'll play with something and go, ‘I don't really like that’. And it's like, ‘Well, it doesn't matter if you like it or not’.” 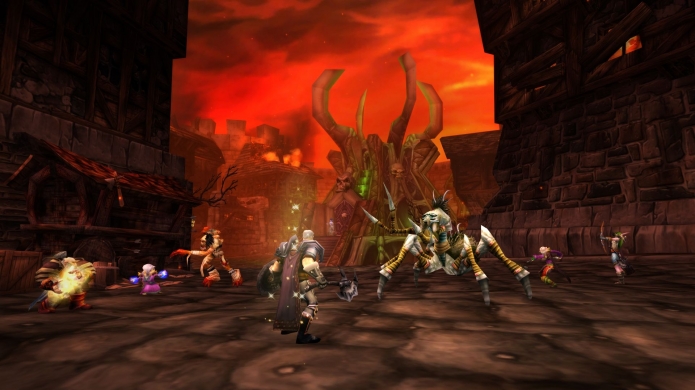 “This example kind of shows the critical meticulousness of some of our Beta testers,” Omar recalls. “They went to the flight masters and looked at the routes being calculated to two different end points. So, for example, if someone were trying to fly from Thunder Bluff to Ratchet and you'd expect to go through Crossroads along the way, but now the path was being computed differently. It took a different route in our version than it did originally. And so, I had to go back to investigate, because it was called out. It was one of the Beta testers saying ‘Hey, it's routing me through here and not through Crossroads’.”

“And I looked at the map, and it turns out that the modern code has a better computational model for figuring out the shortest path by time, giving a different result,” Omar explains. “So, we brought back the older original calculation so that you took the original path, even though it might've been slightly different. Or, a bit longer. These are the little details, which in the grand scope of things may not be huge, but it's important to the players and therefore it's important to us as well. That's the level that we're taking about with this project.”

"All the big picture stuff we did early on, and quickly we arrived at that point where we really felt confident in the project and started looking at those little detail things."


“The reason we're working on small details like this [during development],” Brian adds. “Is because we've gotten all the big picture stuff out of the way. All the big picture stuff we did early on, and quickly we arrived at that point where we really felt confident in the project and started looking at those little detail things.”


Throughout the journey and the road to releasing World of Warcraft Classic, even though the team was able to bring back even the smallest little detail or quirk that people the world over remember vividly, it’s still the overall game that shines through. 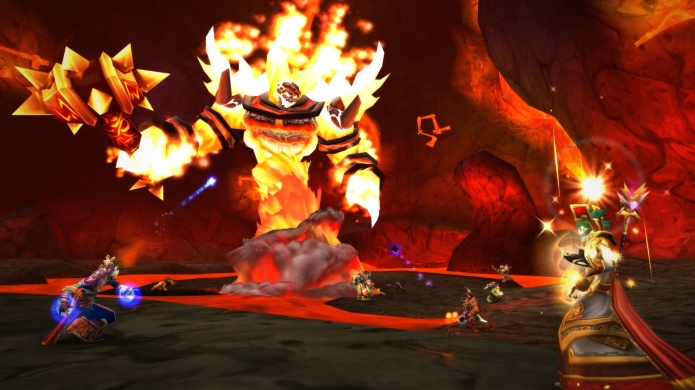 “It really focused for me how much World of Warcraft is a game about playing with other people and making new friendships,” Brian concludes, discussing whether bringing Classic back changed his perception of the long-running title.

“It reminded me of some of those earliest memories I had, making friends in World of Warcraft. Doing difficult content together, going out to eat after we had a major accomplishment in the game. Getting to meet friends face to face and find out who these people were that I was playing with. Those are great memories and Classic has rekindled that. That love of meeting new people through gaming.”

World of Warcraft Classic is out now. Thanks to Blizzard for taking the time to talk to us, and of course, for the decades of wonderful gaming experiences.
Tweet