A great option for those looking for a dedicated headset for Xbox console gaming.
Xbox Wireless Headset Review - Affordable Wireless
Call of Duty: Modern Warfare — The Biggest Multiplayer Call of Duty Ever
Post by Joaby @ 07:58am 02/08/19 | Comments
Call of Duty Modern Warfare is the biggest multiplayer version of the game ever. That might sound like hyperbole, but it isn't as Joab Gilroy discovered after a recent Modern Warfare multiplayer reveal event held out in Los Angeles...


Oh God, look at that title. It's so over-the-top. So needlessly exclamatory. "The biggest ever", as if that means anything. Every single time you see a preview of a game these days, it's always something. The biggest, the shiniest, the most blah-blah-blah instalment of a 10+ game franchise ever, when all they ever do is iterate on a design they've perfected over more than a decade of development.

Ok, Random Internet Commenter(™) who lives in my brain, you have a half a point there. Previews often set us up with expectations that can't be delivered on. But when I tell you that Call of Duty: Modern Warfare is the biggest, shiniest and most diverse multiplayer experience in the series' history, I'm not kidding. It's scientific fact. So cram that up wherever your species traditionally crams things.

"Shinier than the games that were running on the reanimated corpse of a Quake 3 engine that has been refitted enough times to be unrecognisable to its parents..."


You should already know that Modern Warfare is built on a brand new engine — one built from the ground up for the latest Call of Duty — which means it's obviously going to be shinier than the games that were running on the reanimated corpse of a Quake 3 engine that has been refitted enough times to be unrecognisable to its parents.

What you wouldn't know is that the new engine is allowing Modern Warfare to feature some battles at a truly spectacular scale. Six versus Six is the new normal. 10 versus 10 is a real possibility. To cap things off, we finished our play-session with some 20 v 20 action.

"But Joab," you protest. "I remember playing COD4 Modern Warfare on 64 player servers."

So do I, voice in my head, but here's the thing — Call of Duty: Modern Warfare is capable of way more.

"We have upwards of 100 players able to play in the same space," explained Jack O'Hara, Design Director at Infinity Ward. "It's really about crafting what the most fun experience is. And this was one where on the tech side it was obviously a big lift to be able to support all that. So I think we're still be exploring all the different ways that you can kind of put that configuration together and have fun with it." 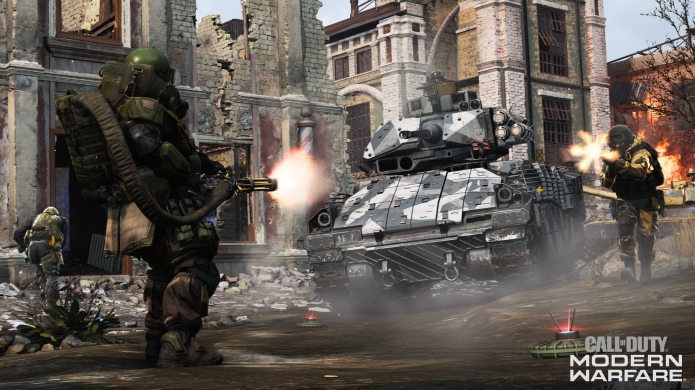 That's the same sort of thing we've heard from DICE over the years about Battlefield — squeezing more players onto a map isn't the challenge, it's doing it and keeping it fun. Having cracked on in the 20v20 mode for around an hour, I can tell you that it's fun. We were playing Battlezone Domination, which is like Domination but bigger, and Aniyah Palace was the only map available at the preview event, but the ease at which the game scaled is pretty apparent.

"So we Battlefield now then?"

What was surprising was to me, Jiminy Cricket, is that it still felt very Call of Duty. The way you move, the way you aim down sights; your gear — it's COD, but bigger and better. You run and gun the same as you ever have when duty has called, but you feel more capable here.

"The animators dug deep to make the whole game feel more immersive — the way you hold your weapon when you're sprinting subtly tells you how long it will take you to ADS..."


You can clamber up and over things thanks to vaulting that is, at this stage, more reliable than climbing ladders. You can drive armoured personnel carriers or ride on quad bikes, and it feels functional instead of clunky (like it did in Black Ops 4). The animators dug deep to make the whole game feel more immersive — the way you hold your weapon when you're sprinting subtly tells you how long it will take you to ADS (aim down sights, for those up the back), and there's an idle animation now so your character isn't standing static when you're AFK. 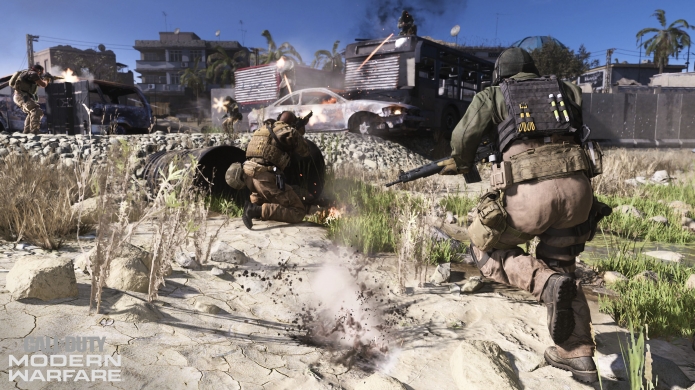 You can now customise your weapon to a level never seen before. You add attachments in the "Gun Bench", which allows you to modify and check out a 3D version of your weapon before you take it into the game. There's a staggering amount of customisation available here, and you can genuinely make any weapon your own — provided you've unlocked the attachments (which is done in a relatively linear fashion, we were told). You can take the humble AK47, give it a CQB stock, a red dot sight, a short barrel, a pistol grip and a laser to turn it into an SMG that is firing wall penetrating 7.62mm ammo. Or you can whack a sniper scope, a long barrel, a foregrip and a padded stock on it to head into the field with a DMR that does full auto.

"Probably the closest I came to something disgusting was a red dot sight on an M14 DMR..."


There were complaints of guns being OP at the preview session, though I didn't feel like that was the case. Probably the closest I came to something disgusting was a red dot sight on an M14 DMR, but even then it was just a shotgun with faster reload times.

I mentioned bullet penetration on the AK because it's a feature now — all the guns have ballistic models, and all the bullets have travel times. Gone are the hitscan weapons of CODs past, replaced instead by far more realistic shooting. It was never that big a deal in previous games because you rarely engaged at a distance where it might matter (except in CODBlops4's Blackout mode). If you're shooting someone inside of 50 metres and someone shoots at you, even 'subsonic' rounds will hit you in a fraction of a second.

But because Modern Warfare is the biggest COD ever, there are situations where the bullet travel time isn't instantaneous. Even in the 10v10 match of Headquarters, I noticed I had to adjust my crosshairs upwards ever so slightly to plink my enemies in the head. Battlezone Domination didn't have the sightlines for me to test the bullet drop further.

"Too bad we'll never be able to play at the same time though," you sigh. "You always get all the game stuff, and I'm always a map pack behind or something."

You're a figment of my imagination, friendo, so we always play together. And the kicker for all of this is that it's coming sans Season Pass. Gone are the community dividing map packs of the past — this Call of Duty will instead give you free maps at regular intervals (although they stayed mum on what the release schedule might look like at this time).


It's similar to what Battlefield has done, and it was a great move there too. Even if you drop off for a little while, you can come back and pick up where you left off. Or if a mate comes to the party a bit late, they don't have to buy a bunch of extra DLC to join in with you.

With cross-platform play — meaning PS4, Xbox One and PC can all play together — built into the core of Modern Warfare, there are even more opportunities to play with your friends. It's such a rad idea too — my little brother doesn't have a good PC, so if I want to play with him, I have to play on PS4. But now we can join in together from whatever machine.

"Call of Duty: Modern Warfare will have a Battle Royale mode. There is zero question in my mind about it. The devs we spoke to played it super coy when asked..."


While we're talking about similarities to Battlefield, I would bet the farm that Call of Duty: Modern Warfare will have a Battle Royale mode. There is zero question in my mind about it. The devs we spoke to played it super coy when asked, but all the pieces are there already.

Hundred player maps for Ground War, quad bikes, flyable choppers, cross-play to support a larger player count… all I hope is that it's available at launch and that they don't screw up the matchmaking the way both Battlefield and PUBG did for too long. Battlefield V's Firestorm was dead inside of a fortnight in Australia, and PUBG has only just recently come good again after a year of being boned. But if Infinity Ward gives it the same attention to detail as the rest of their game, I'm confident it will be a great entry to the BR genre.

There's an open beta coming in September, hitting PS4 on September 14 to 16, and PC and Xbox on the 21st to 23rd — both sessions open two days earlier for pre-orderers. The game itself hits October 25th.

As an overall multiplayer package, and even at this early stage, Modern Warfare is supremely impressive. It just feels like a staggering amount of content, and it's not yet finished. Infinity Ward is pulling out all the stops with this to get players onside. It really is the biggest multiplayer Call of Duty ever.

Joab traveled to Los Angeles to preview Call of Duty Modern Warfare as a guest of Activision. Travel and accommodation were supplied by the publisher.
Read more about Call of Duty: Modern Warfare on the game page - we've got the latest news, screenshots, videos, and more!
Tweet