The latest June 2020 quarterly update on Diablo IV is a treasure trove of new info, so let’s break it down.
Diablo 4 Update – Open World, Events, Legendary Gear, and More
Blizzard on Re-Designing Quests for Hearthstone: Saviors of Uldum
Post by KostaAndreadis @ 04:10pm 01/08/19 | Comments
We discuss the return of Quests with Lead Designer on Blizzard’s Hearthstone team, Mike Donais. And what makes them some of the hardest cards to design.


The latest expansion for Blizzard’s long-running competitive card game Hearthstone is set to launch next week. And in continuing the Year of the Dragon storyline from the recent Rise of Shadows expansion, Saviors of Uldum switches the perspective to the heroes – with a vibrant and fun Saturday morning cartoon vibe. With a suite of new cards and new mechanics joining the rectangular fray, the Hearthstone team are bringing back a blast from the past. Quests.

Which you might recall are objective-based class missions that once completed have a huge impact on both the board and the outcome of a game. And it’s this impact, the tempo, and end-game potential that makes Quests cards some of the most challenging for the Hearthstone team to design, test, and implement. In Saviors of Uldum, Quests work a little differently – in that the rewards will no longer be as game-changing or game-ending. This in turn will make them easier to complete too. 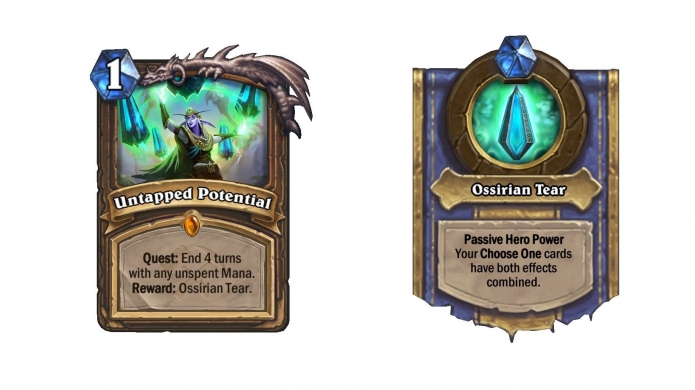 “Quests ended up being a massive amount of work to design and balance.,” Lead Designer on Blizzard’s Hearthstone team, Mike Donais tells me. “You want to make sure that completing a Quest is interesting. That, building the deck is interesting. That your deck is still interesting after you’ve completed the Quest.”

Although simple to understand, do a thing and get a reward, it’s something that affects all stages of Hearthstone play – and very different from the one-time use nature of cards in general. “Quests are very different from most Spells and Minions,” Mike continues. “The whole idea of being down a card on Turn One and trying to play catch-up for the rest of the game is such a different sort of tempo, that it's really hard to compare to existing cards. So, Quests end up becoming the most difficult cards in the set to design and balance.”

In relation to the redesign Mike notes that original rewards were so powerful because you payed such a big cost to complete a Quest. The first version of the Mage Quest once completed basically meant that you won the game. So then, the question becomes, does this re-design which focuses on a smaller cost and a lower reward – better or worse?

“I don't think it's black and white,” Mike responds. “I don't think the new quest system is necessarily the way we go forever. I could imagine that if we ever did Quests again, we might try an in-between mix. But I think what we’ve done here is going to be a fun way to play. Players are going to like using them and players who are playing against Quest more importantly aren't going to feel like, ‘Wow, I got killed in one turn by the Quest reward’.”

Hearthstone: Saviors of Uldum will be available starting August 7, 2019.
Tweet