As Hearthstone heads into the Year of the Phoenix, it’s introducing the first new class since the game launched. The game-changing Demon Hunter.
Inside Hearthstone’s New Game Changing Demon Hunter Class
It's a Whole New Galaxy Out There - Hands-On with Borderlands 3
Post by Steve Farrelly @ 04:00am 02/05/19 | Comments
AusGamers was invited out to a special preview event for Borderlands 3 in Los Angeles, California to go hands-on with the game. Read on for our full thoughts...


Right out of the gate, the most exciting thing coming to Borderlands 3 is planet hopping. That’s right, we’re finally leaving Pandora aboard our very own spaceship -- Sanctuary III. And this isn’t a small ship, either. Sanctuary III will act as your base of operations filled with new and familiar characters, merchants, services and the all-important and ever-hilarious Claptrap. The game has always teased of vault-hunting across the galaxy, and now we can do it with a promise of new, unique biomes, enemies, enemy-types and more loot. Fuck-loads of loot.

And guns. Lots of guns. 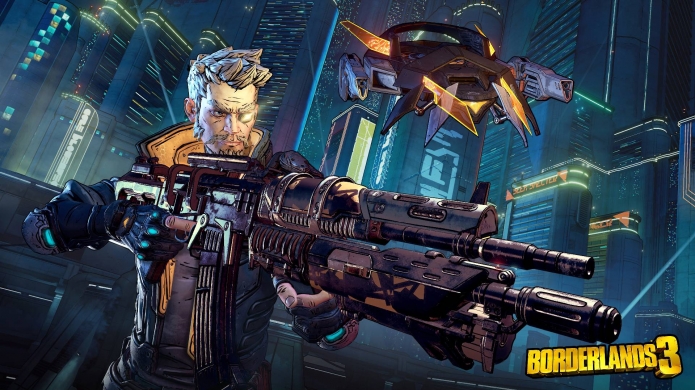 At a recent event in Los Angeles, AusGamers was invited to get hands-on with a PC build of the game running on AMD Ryzen Radeon cards and looking mighty pretty now powered by Unreal Engine 4. What I can say from my time with this game is this is still very much Borderlands. And that’s not a bad thing. Four-player co-op remains in-check and can take place across network or locally in split-screen. We have four new Vault Hunters with a familiar leveling system alongside skill-trees. Each Vault Hunter also has three “Action Skills” and can equip one at a time to be deployable in combat along with grenades. And vehicles make a welcome return.

"The idea that the art team has been able to imagine all new biomes on fantastical new worlds means we’re likely in for a visual experience..."


The “very much Borderlands” statement above also applies to what Gearbox head honcho, Randy Pitchford, described during his presentation at our event as the series’ “one of a kind art style” which in 4K on the new engine really pops. And with the revelation now that the game is about jumping from planet to planet, the idea that the art team has been able to imagine all new biomes on fantastical new worlds means we’re likely in for a visual experience that has the potential to truly be off the charts. Unfortunately, we only saw a bit of the familiar Pandora while our hands-on took place on Promethea which is home to the Atlas Corporation who, for the purposes of our demo, are besieged by the Maliwan Corporation as they attempt a literal hostile takeover, but I’m getting ahead of myself here. 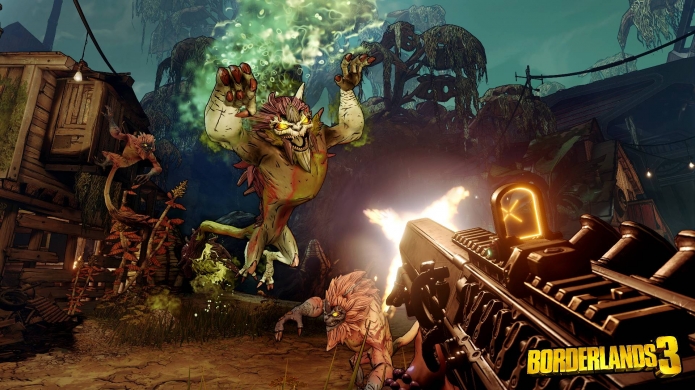 The game’s new baddies are the Children of the Vault, and as you’d expect of a Borderlands experience there are bosses. On stage we saw two boss examples, though they were described as mini bosses, there’s still a familiar Mad Max caricature design about them. In fact, throughout the demo and hands-on the series’ humour didn’t let up, which couples nicely with its over-the-top gore -- bodies exploded, caught fire and limbs were bouncing around everywhere. As mentioned earlier also, the sheer number of guns is staggering, and they’re the stars of the heart of the game’s experience. Weapons also have various functions, such as being able to throw one out into combat with legs which will autonomously walk around and attack baddies. This was reminiscent of the laptop gun from Perfect Dark for me, and it looks like the creativity of the game’s guns will go to a whole new level. There’s even a gun Randy showcased that is effectively an homage to the Fifth Element where a tracking bullet hits a baddie and each subsequent bullet now follows that baddie regardless of where they are, or of where you’re aiming.


We were only introduced to two of the four new Vault Hunters -- Amara and Zane in playable form. Vault Hunters are now more customisable with numerous head options, skins, emotes, full skill re-spec options and Echo skins. They’re all voiced as well. The Crimson Raiders are also back and NPCs will come along and fight with you. They can revive you in combat, and you them as well. The team also made an emphasis on being able to refill ammo with more ease, and as you’d expect that function as well as gaining more items all come by way of the game’s vending machines littered about the place. 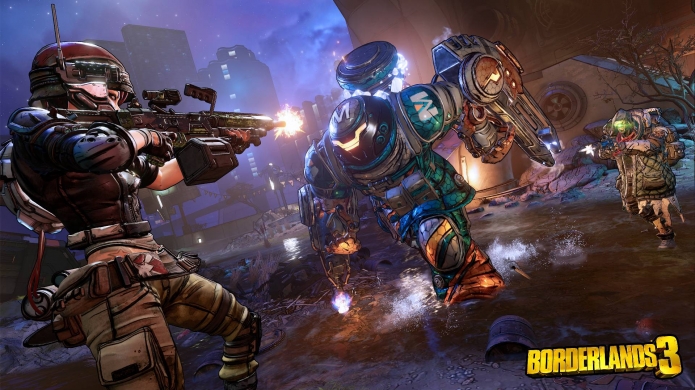 One of the more interesting concepts is in level balancing and “loot instancing” in co-op play. The former means someone at a higher level playing with someone at a lower level will face enemies appropriate to their level, meaning rewards are reflective of your level, so anyone can join in with anyone and not feel like they’re being short-changed or are just there as an effective level boost for the lower level player. The latter means each player receives their own stream of loot, again appropriate to their level. And co-op remains drop-in, drop-out. There was no mention of cross-platform play, but as it looks like 2K and Gearbox have teamed up with Xbox, it might be safe to assume that there will be at least PC to Xbox crossplay.

"On Sanctuary III, you’ll be able to upgrade sections of the ship and even display items found in your travels as trophies..."


On Sanctuary III, you’ll be able to upgrade sections of the ship and even display items found in your travels as trophies. Numerous NPCs from the series’ history will make up much of your crew and will be able to be interacted with. There’s a greater emphasis on a sprawling story as you travel from planet to planet, and it doesn’t appear to be overly linear with the team also mentioning being able to revisit planets. The planets are large, too, with multiple sections, interiors and more revealing themselves to me in my hands-on on Promethea. 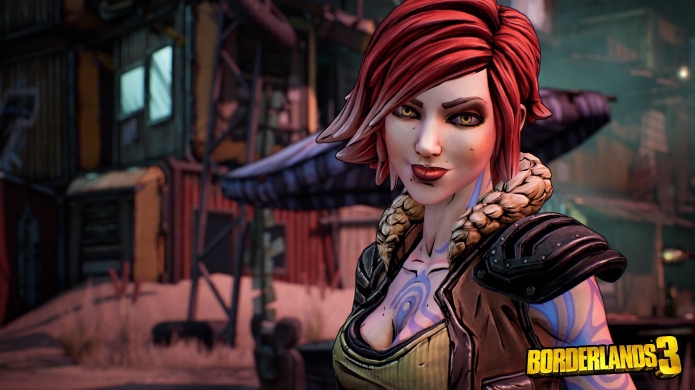 I played through the preview section of the game as Zane and found the gunplay and action skill combos to be incredibly satisfying. Enemies come in thick and fast, but also hide behind cover (some of which is now destructible), flank and generally display competent AI that has you thinking and reacting tactically. We only had two difficulty levels to choose from: Easier and Normal (hopefully there’s a Hardcore mode upon release). On Normal I died just the once but it was still tough in areas. Arena combat waves make you use the space, and new to the series is a combat slide and the ability to mantle. Both of these are important when evading enemies -- some of which can jump at you super-aggressively. You have a regenerative shield, which is helpful, but you’ll need to find health to replenish any lost when you’ve depleted your shield.

"there’s a balance between familiarity and blending the unique systems, which is all presented in an equally unique world through the game’s art, humour and frenetic gunplay..."


It’s a disservice to how all of this comes together to say this is “standard shooter fare”, but if you’re a FPS player, it will be easy to pick up and play. So there’s a balance between familiarity and blending the unique systems, which is all presented in an equally unique world through the game’s art, humour and frenetic gunplay. Which is to round all of this out, very much a Borderlands game. And we’re fine with that. It’s just bigger, more expansive and brimming with exploratory opportunity now as a planet-hopping experience. 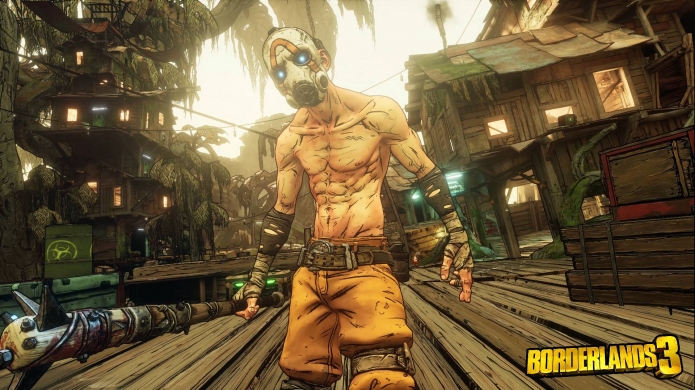 I was worried the team would go down the Destiny or Anthem persistent online world route, but to use a hacky phrase, they stuck to their guns and have played to their strengths. This is going to be a big release, but one I’m more excited for than ever given what we were shown, and what I played. Sign me up, Crimson Raiders.

Disclaimer: AusGamers had its flights and accommodation paid for by 2K Australia.

Read more about Borderlands 3 on the game page - we've got the latest news, screenshots, videos, and more!
Tweet