NBA 2K21 is the best basketball game around... but it's also the only one.
NBA 2K21 Review
Dragons, Cats, and the Dark Arts – The Elder Scrolls Online: Elsweyr Interview
Post by KostaAndreadis @ 04:27pm 06/02/19 | Comments
We sit down with Rich Lambert, Creative Director at Zenimax Online Studios to talk about The Elder Scrolls Online's next cat-tastic and dragon-fabulous expansion - Elsewyr.

Dragons as depicted in Skyrim were a key part of a grand supernatural story that dealt with special mythical dragon abilities and a line of long-lost Dragon whisperers called the Dovahkiin. In Elder Scrolls Online, the inclusion of dragons is being handled a little differently. “They're going to be more difficult for players to deal with because nobody's Dovahkiin,” Rich adds. “You won’t have that toolkit where you can absorb shouts and learn the dragon language and what not.” That said, the team at Zenimax Online Studios worked closely with Bethesda Game Studios to ensure that their interpretation of dragons both fits the lore and still feels like Elder Scrolls. 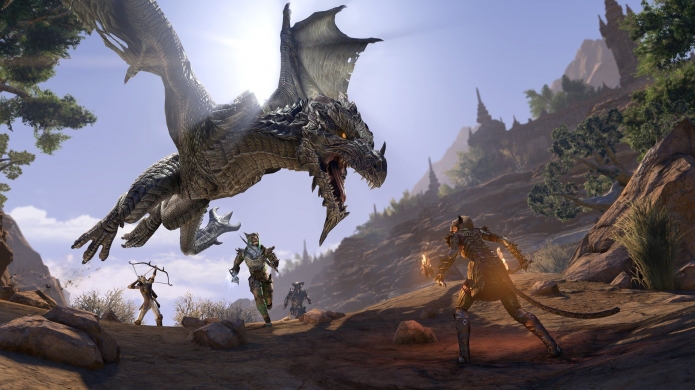 For a long-running series with an established history that is detailed and varied, and sometimes a little weird, there’s still plenty of room to explore, discover, and fill in the gaps. “There's a lot of Elder Scrolls lore,” Rich attests. “But even so not a lot is relevant to Elsewyr. We know several things in terms of how there were once sixteen kingdoms, all united, but it's not detailed. This gives us a lot of latitude to go in and kind of find our way through it. But as we start digging through the pieces, we can also shine more light on what we find.”

With one of those examples being the somewhat weird history of the Khajiit species. “In the lore there's seventeen types of Khajiit, or different breeds of Khajiit,” Rich explains. “And there's this really wacky stuff about how they’re chosen by the phases of the moon and all this other stuff – their spiritual leader and so forth. Most of these breeds haven't really been seen in an Elder Scrolls game before so we’re able to show players a little bit more about that side of the Khajiit. That also led to how dragons became involved in the story. In the end we were able to tie those things closely to each other, which is fun and makes it feel like a more cohesive, interesting story.”

"[Dragons] are going to be more difficult for players to deal with because nobody's Dovahkiin."


Although it first released on PC in 2014, it’s in the past few years that Elder Scrolls Online has truly come into its own -- so to speak. With 2017’s Morrowind kicking off what is now an impressive yearly expansion and content cycle, with some of the most impressive Elder Scrolls role-playing and storytelling to date. From wonderfully realised locations, as per last year’s excellent Summerset Isles-set expansion, to fewer and more long-form quests telling intricate and well-written stories. Elsewyr is shaping up to build on that success. 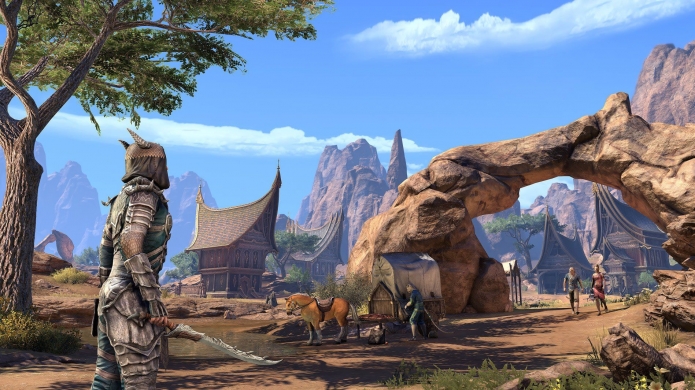 “We always learn something every time we create a new thing,” Rich explains. “A lot of the learning and improvement comes from becoming more efficient in how we build new areas. The world builders work closely with the artists to develop better ways to get things up and running early. And then a lot of what we have been doing over the past few years is listening to players and looking at how they play through the content and what resonates with them, and then try to build on those experiences and improve our storytelling.”

Which in part led the team towards creating more long-form storytelling, with returning characters from previous expansions and locations becoming intimately involved in new tales and journeys. “New characters are great and fun and interesting but bringing back favourites is one of those things that players really enjoy because they've built such a strong relationship with them,” Rich continues. “They actively told us when we were working on both Morrowind and Summerset that they would love to see more of that.” In Morrowind this led to Morag Tong member Naryu Virian making a return and everyone’s favourite Khajiit, Razum-dar, in Summerset. 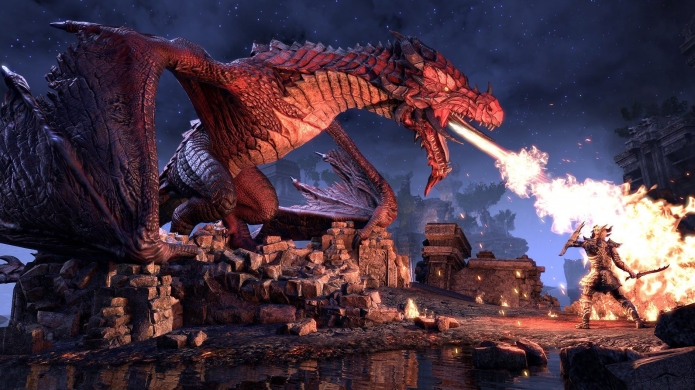 Back to dragons for a bit, their inclusion in Elsewyr also means a more varied and fluid approach to the concept of events or world-bosses than what has come before. “They are not going to act like Dark Anchors, they are not static in that way,” Rich explains, referring to the core game’s Dark Anchors which were fixed locations in each location that could activate and spawn an invasion-style event. “Dragons will appear in the world. They'll fly around. There are some locations that they may prefer to fly towards, but it's not going to be predictable. We wanted to make them feel like they are part of the world, and that they could navigate and move about any way they wanted.”

The inclusion of dragons is something that the team has been working on for quite a long time, referring to the new approach as ‘Dragon Tech’. “Everything from how you get a dragon to fly in the world to how you make it look like it's actually banking properly and animating correctly,” Rich adds. “Even something as simple as getting them to show up on the map. There's also combat spacing and collision on the dragon. This is a giant monster, so how is it going to feel when you have a melee character versus a ranged character. We spend a lot of time on all of it.”

"New characters are great and fun and interesting but bringing back favourites is one of those things that players really enjoy because they've built such a strong relationship with them."


Alongside dragons and getting to see the homeland de los gatos, Elsewyr is also introducing a new playable class – the Necromancer. Something that, no matter the fantasy setting, fans always seem to be asking for. In the world of The Elder Scrolls, Necromancy has been a major presence throughout the history of Tamriel. “Necromancy is a really big thing in Elder Scrolls lore,” Rich confirms. “It’s kind of the precursor to the Mages Guild. The Mages Guild was started because there was infighting in the Psijic Order, around whether Necromancy was good or bad. One of the Daedric Lords is all about Necromancy. It’s something we've always wanted to do and something that our players have always wanted us to do. Even during the initial beta, they were asking, ‘Where's the Necromancer class?’” 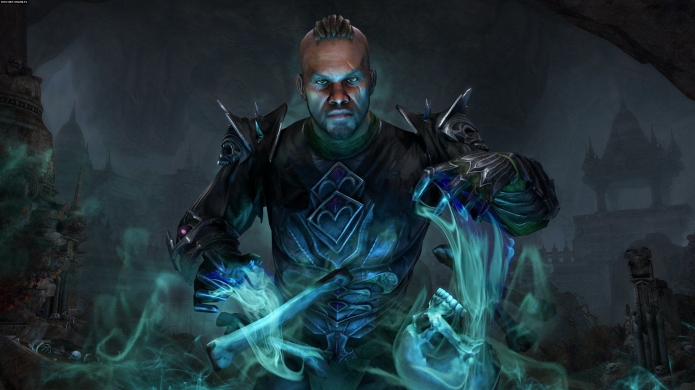 Benefitting from several years of continued development and fine tuning The Elder Scrolls Online, there will be a few surprises with the new class - alongside a brand-new tutorial or opening area for players both old and new to create a new character. “That's definitely one of those things that we actually look forward to a bit because we get to take the lessons learned from the previous tutorials and building those previous zones and try to make them better,” Rich explains. This time around the new tutorial will teach players tactics and combat mechanics that some players either do not fully understand or realise are there, like the dodge roll. In a way that will hopefully stick with players as they head into Elsewyr proper.

As an online RPG, the Necromancer will be able to fulfil all the roles that are expected from the genre – including healer, tank, and damage dealer. Roles that are a core part of the Necromancer’s design. “Necromancers, naturally, have some abilities that can summon pets,” Rich adds whilst referring to the dead returning to the land of the living as ‘pets’. “They have other abilities that are not pet related, destruction magic and things like that. Each of the three skill lines they have are focused around a role, so they have a tanking skill line, a damage skill line, and they have a healing skill line.” With all three themed around the concept of Necromancy and undead magic, the new class will give players the option to cast their ungodly magic in any fashion they choose. 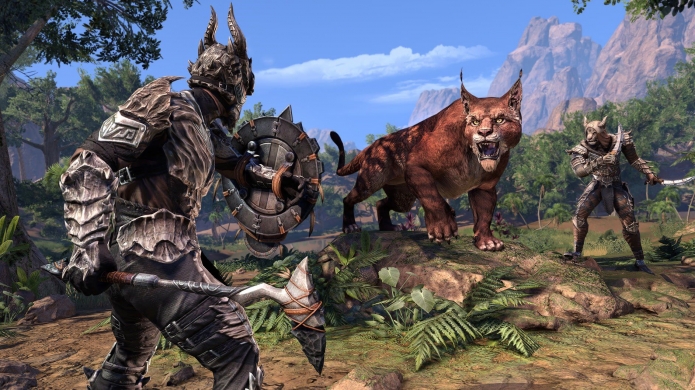 But, with Necromancy and performing experiments and spells on the dead as a general no-no, thankfully how NPCs will react has also been taken into consideration. “Necromancy is frowned upon in the world, and one of the things that we're working on right now and testing is how this incorporates into our justice system. What we're testing right now is anything that is overtly necromantic, summoning skeletons in town or turning into the bone colossus in town, people will call the guards on you. That's sort of where we're going to start, and as we kind of go through that process and figure out how that feels we'll look into extending that into other places like the Mages Guild.”

"Necromancy is frowned upon in the world, and one of the things that we're working on right now and testing is how this incorporates into our justice system."


The Elder Scroll Online: Elsewyr is set to launch across PC and consoles in June, with the team also planning to extend the story and theme into what is being referred to as the Season of the Dragon – where new story content and other pieces will tell a piece of a larger, more involved story. “Each of our updates will build on the last one and provide context and interesting changes,” Rich tells me. “Tying it all together lets players dig in more and find out more about what's going on, which is something that they have been asking for.” Adding that it makes development for the team easier too, giving them time to focus on a larger single story instead of trying to create new smaller unconnected stories every few months.

“Our business model kind of promotes that cyclical thing where you're not forced to subscribe in order to play the game,” Rich concludes. “You can kind of pick it up, play for a while, and then move on to something else and then come back. It's very easy to come back and play and be right there with your friends at any time. Having that year long story definitely incentivises those people that are interested in that side to come back a little bit more often.”

The Elder Scrolls Online: Elsewyr is out June 4 on Xbox One, PlayStation 4, and PC/Mac.

Read more about The Elder Scrolls Online on the game page - we've got the latest news, screenshots, videos, and more!
Tweet