As the latest LG OLED, the CX presents a high-end display that takes OLED technology forward in meaningful ways.
LG CX 65-inch 4K OLED - A Stunning Next-Gen Ready Display
Talking DOOM Eternal with id Software
Post by KostaAndreadis @ 04:48pm 20/08/18 | Comments
At QuakeCon 2018 we had the chance to sit down with id Software's Marty Stratton and Hugo Martin to chat about DOOM Eternal.


Leading up to the DOOM Eternal reveal at QuakeCon 2018, there was a palpable sense that whatever the gameplay reveal turned out to be – odds were firmly in favour of it being impressive. Which comes from the overall positive reception to DOOM (2016), a title that once it found its ultra-violent and gleefully insane voice during an elongated development period - became one of the most memorable shooters in recent memory. Where the old-school meets new-school sensibility and id Software’s dedication to modern, fluid, and responsive controls, resulted in a refreshingly intense experience. One that fits in perfectly among other id classics like the original Wolfenstein, Doom, and Quake.

This renewed vision of what DOOM is, finds itself expanded upon in DOOM Eternal. The extensive gameplay that id Software brought to the QuakeCon stage was almost too much to process. Thanks in part to, well, how incredible the action looks. Not only did the id Software duo of executive producer Marty Stratton and creative director Hugo Martin showcase the new setting of ‘hell on Earth’, but it added many more into the mix – including a return to Phobos and locations that felt like they could exist in Blizzard’s Diablo universe. But that was only the beginning, new exciting traversal mechanics including a grappling hook, destructible demons, a revamped id Tech 7 engine, and multiplayer in the form of invasions – where players can take on the form of demons to interrupt another’s campaign – were also shown and teased.

One then must wonder, as development of DOOM Eternal began, and those initial meetings or discussions took place - was there a renewed sense of confidence amongst the team. “Initial design meetings are always about no bad idea,” Marty Stratton tells me. “Team is such a good word for what we do, because it's like a sports team where the more you practise and the more the team has played together the better they get at executing. When it comes to initial design meetings, they're so much more efficient. Every meeting is so much more efficient now, because everybody kind of knows, we've practised. We've played games together, and I don't mean video games. We've played metaphorical games together. Everybody knows where everybody's at on the field for the most part.”

Which leads to better ideas as id Software fully understands what it means to create a new DOOM, and the talented development team grows more confident as a single unit. “That's not to say that we've gotten to the ideal [place], we're still pushing to be better,” Marty continues. “Even when we say we start wide, the design, the ideas are better because they fit within the context. And we've shipped DOOM, we know what kind of game we're making. So, the ideas are better, they get narrowed down into better ideas, and it's just a much more efficient process on our side which means we get to do more.” 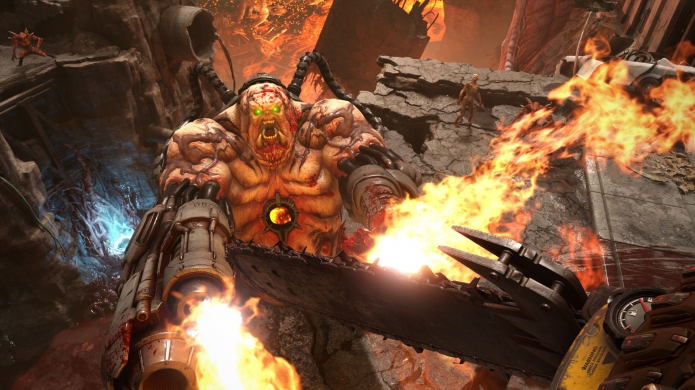 In speaking with developers at id Software it’s clear that the team working on DOOM Eternal is highly reflective on its past work, including what it sees as shortcomings from DOOM (2016). So, where what you might hear traditional sequel development speak with phrases like ‘more than double the types of enemies you get to fight’ - this was born from a feeling that the latter part of the original grew stale, over time. So, from there new mechanics, weapons, and traversal options fell into place.

“One of the big things, we wanted to [create more] tools, so that way when we got down the path of designing levels, we wanted to do something interesting beyond just the loop of kill a guy, stagger and glory kill,” Hugo Martin adds. “You got to have the tools in place to be able to do that. So, things like wall-climbing opens-up some interesting opportunities for traversals, or mid-combat activities, or secret hunting. The dash combined with the double jumps, monkey bars, all these things combined, you're gonna be able to get into some interesting spaces in [DOOM Eternal], and that's what makes a game great. I mean, look at Tomb Raider, [Lara]'s got a collection of abilities, and it's how the designers put those abilities together that make for a compelling game to play.” 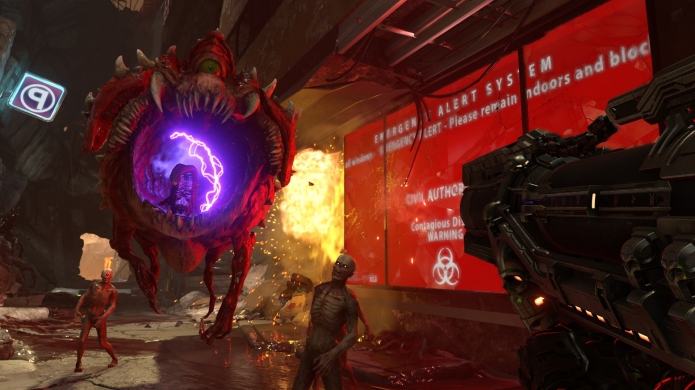 Expanding the number of glory kills, DOOM’s over-the-top finishing moves where the Doom Slayer dispatches demons in a hyper-kinetic Mortal Kombat like fashion, serves as only a small part of the greater DOOM Eternal combat picture. This idea of creating a vast set of tools for the player, or Slayer, has been there from the beginning. A title that fully understands what players found compelling with the original, while also introducing a greater sense of scope to sell the idea of Doom that’s more than just Mars and a scientific or industrial location or two. Expanding the Doom universe to include more environmental storytelling is being treated with the same level of detail as demon that falls apart after each Super Shotgun blast.

Even the title itself, DOOM Eternal hints to id’s greatest regret from DOOM (2016) – the promise of more single-player content post release. “The eternal struggle between good and evil,” Hugo responds when asked what the title means for the team at id and DOOM’s future. “A larger experience. New places, new enemies, you know - just more. More of the stuff that you want. It feels timeless too, because that's what the Slayer represents. He represents the good against the demons which are eternally evil. So, it just felt appropriate.” 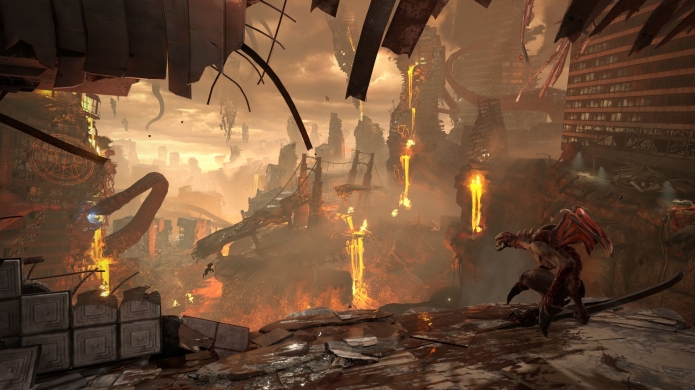 “The fact that people wanted campaign content post launch that we never delivered is a regret, honestly, on our part,” Marty adds. “We've seen how much people love replaying the campaign, [so] a priority [with DOOM Eternal] is to make sure that we deliver on that. There's an aspect of that in the name Eternal, that we want, whether it's through campaign DLC content, or the Invasions, the capability to invade player's campaigns over and over and every time it's a different experience - we want to give people more. We want to give players more value, more reasons to play, more fun.”

Thanks to its QuakeCon presence, DOOM Eternal has quickly become one of the most exciting games currently in development. A gameplay reveal that not only exceeded expectation in terms of what could be created based on the excellent DOOM (2016) framework – but another revelation in the form of a reminder that even after a few decades id Software are still at the forefront of first-person shooter design.
Read more about DOOM Eternal on the game page - we've got the latest news, screenshots, videos, and more!
Tweet