Where we fall in love with the turn-based RPG combat and new protagonist Ichiban Kasuga.
Yakuza Goes Full RPG In The Brilliant Yakuza: Like a Dragon
Amid Evil is the First-Person Shooter We Need in 2018
Post by KostaAndreadis @ 03:46pm 20/03/18 | Comments
A spiritual successor of sorts to the classic FPS Hexen, Amid Evil proves that old-school can feel new again.


There’s an old saying that goes something along the lines of ‘they don’t make them like they used to’. A blanket statement that can, for better or worse, be applied to anything in the ‘make them’ field - including games. For the first-person shooter it especially rings true, without being limited to all the advances made over the past few decades in the realm of graphics. Amid Evil from developer Indefatigable and publisher New Blood Interactive, available to play right now via Steam Early Access, is an old-school shooter with design that feels lifted from 1998.

Which in 2018, is an exhilarating breath of fresh air. 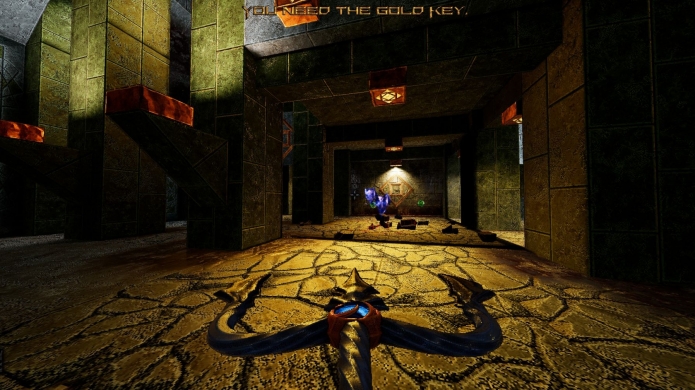 Because classic design is just that, no matter the era. 2D platformers have seen a resurgence of late for this simple reason. With Amid Evil, and other recent old-school shooters like Dusk, comes undeniable proof that the early first-person shooter was full of classic design. Weapons that were varied and suited to situations and enemies in a chess-like fashion. Levels that offered up logical maze-like progression and various hot spots that required planning. Or, the reloading of a recent save file. Action that was pushed to the forefront, at speeds that would make most modern titles blush.

With only a passing nod given to the concept of an immersive cinematic experience.

This is not to say that Battlefield or Call of Duty or Rainbow Six Siege don’t represent the evolution of a genre, with refined design built on the backs of decades of examples. No, it’s to merely point out that Amid Evil is still a great game even though we’re well into the 21st century. And because it has been so long since the era that Amid Evil is clearly drawing on for inspiration - what’s old feels new again.

And it looks great too. The implementation of Unreal Engine 4 provides a best-of-both-worlds approach, with a look that feels old school whilst still featuring fantastic lighting effects, impressively animated and vertical levels, and brilliant texture work. Sound-wise the same attention to detail with modern flourishes is also present, thanks to the wonderful score and filtered effects.

In terms of comparisons Amid Evil bears the most similarity in look and tone to that of Hexen and the original Quake. Hexen in the sense that its world is one full of magic, fantasy, and weapons that have more in common with what you might find in a wizard’s wardrobe than a soldier’s, err, cabinet. Throw in the speed and verticality of Quake and the fresh coat of Unreal Engine 4 paints a first-impression along the lines of how the very first Unreal game looked when you fired it up for the first time. 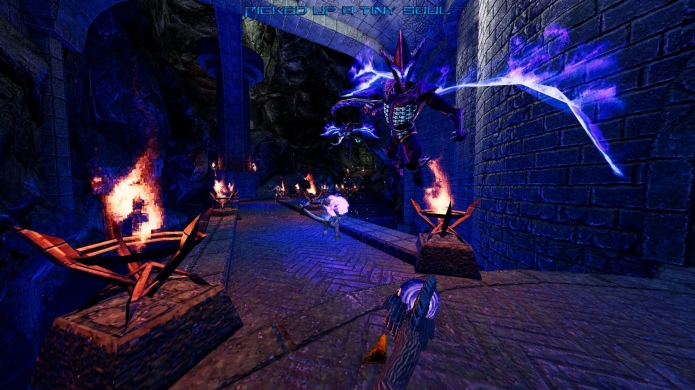 From there it’s simply a series of satisfying moments. From the raw up close and personal attacks made with the default weapon, a suitably chunky axe, through to watching blue mana balls fire off at distant foes as you track their movement and align your staff’s projectile speed and angle. In what might be its most modern touch, enemies will leave behind their souls. When collected they help build up a power meter that can be used to unleash a superpowered series of attacks, no matter what weapon you’re holding. Even the melee-only axe begins spinning like a helicopter blade, turning it into a monster-grazing lawnmower.

Weapon feel is important in a shooter, no doubt. Doubly so in a game like Amid Evil. Thankfully each one has its place, including a giant staff that fires off a random planet that explodes on contact. Including, what looks to be a miniature Earth. It’s both bizarre and very cool. Switching between weapons based on ammo conservation and what threats lurk in the shadows or around corners is a staple of the Amid Evil-playing diet. No one or two weapons all the way to end here. 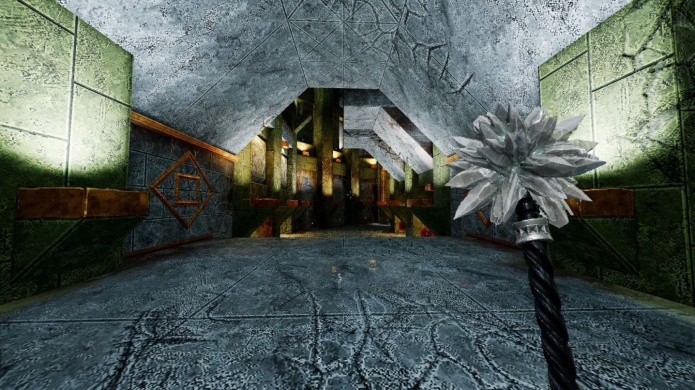 On top of the wonderful controls, great level design, and fun action, there’s also a sense of variety that permeates throughout Amid Evil. Which elevates the overall experience into what just might be the surprise, sleeper hit of the year. No two levels feel the same, let alone and of the three different episodes currently playable. Of a planned seven in total. Strategies and enemy placement and level progression switches and changes without ever growing stale.

In the end Amid Evil reminds us that the concept of a single-player campaign in a first-person shooter has narrowed over the years. And sure, there was a time when shooters were deploying increasingly complex levels with outlandish weapons and boss fights one after another. But that time has come and gone. And with that particular dust more than settled, Amid Evil, like the blast from the past that it is, is here to provide a fun, memorable, and sublime old school shooter. Because hey, they don’t make them like they used to.
Tweet