We spent four hours with a ray-traced enabled build of Watch Dogs: Legion and were again, floored by its recruitment system. And realistic reflections.
Watch Dogs: Legion - We Go Hands-On With RTX On
Hardware Mod - Liquid Cooling + Geforce GTX 1070 Founders Edition
Post by AaronJones @ 03:50pm 16/01/18 | Comments
Where we took at look in our hardware room and noticed both a Cooler Master MasterLiquid Pro 240 Closed Loop Watercooler and Geforce GTX 1070 Founders Edition just sitting there.


Today we try something different, something a little out there. Mounting a Cooler Master MasterLiquid Pro 240 Closed Loop Watercooler onto a Geforce GTX 1070 Founders Edition.

Okay, so some of you might be asking the single word question, “Why?” And to you I simply say, “Why not!” Sure the method may almost cross into the realm of madness but the aim here is to get the GPU running both quiet and cool, whilst allowing for a stable overclock that doesn’t dip due to thermal throttling.

Founders Edition cards with reference coolers appear to be somewhat ideal for these mods because they:


Government Mandated Warning: The next steps WILL void your manufacturer's warranty. And possibly render you legally insane. 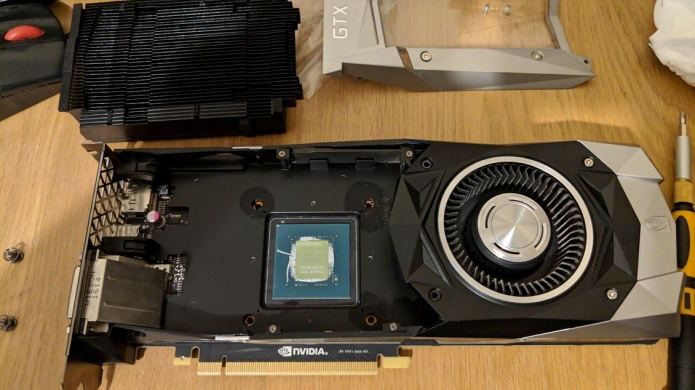 Hmm, probably should have taken a before photo just in case

Okay so to make way for the Liquid Cooler block, two shrouds and the Vapor Chamber need to be removed. Easy enough. But the next bit, mounting the copper waterblock is perhaps the most difficult since none of the brackets that were supplied fit the 60x60mm GPU mounting layout. But, we do these things not because they are easy, but because they are hard. Some might even say “Dark Souls of waterblock mounting” hard.

Anyway, a bit of engineering, some M3 screws and nuts, along with the provided Cooler Master Thermal Paste and voila - Nvidia GTX 1070 Frankens Edition (FE) is complete!

The moment of truth

Fans and pump on the Cooler Master Pro 240 plug into available system fan sockets on your motherboard, the speed of which can be managed through your BIOS. After some testing, we left the pump on maximum as this remains very near silent. The fans were set to 30% speed, also very near silent. After that, our loudest component on the PC by far is the PSU fan.


After running Unigine Valley for 30 minutes to ensure stability and that all components were working as required, the real testing began. To put FE through its paces we tested over four hours gaming on Destiny in 4K on medium/high settings, Star Wars Battlefront 2 1080p with 200% resolution upscale and Fallout 4, heavily modded with 4k Textures and environmental details. Plus, a few passes of Futuremark - Timespy.

We finally settled on a stable overclock of +200mhz on the core, for a Rocky Solid Balboa total 2088mhz core frequency, we found an impressive maximum temperature of only 42c! For comparison, when the card was on air with the stock fan/curve running a +150mhz overclock, it very quickly hit 80c. So the fan became very loud and Boost 3.0 would have the card throttled down to the more stable 1888mhz. 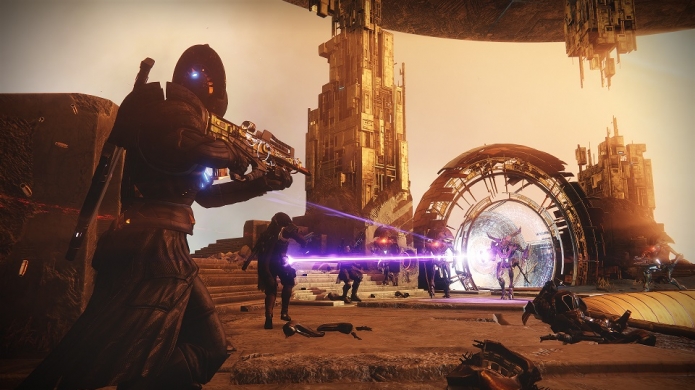 Breakfast for the Frankens Edition

At the end of the day, what did we achieve with this mod? Well, we didn’t land on the moon or world peace but an additional 200mhz on the core and near-silent operation (room peace?) are a pretty good pay-off. If that’s worth the effort, investment and risk, then you might want to try it!

And before you say, yes the 240mm cooler is overkill for the 1070 GPU. And would be better suited to the 1080ti’s hefty TDP, along with some of the red teams more power hungry offerings - if you can even get your hands on them. The Cooler Master MasterLiquid Pro 120mm is likely more suited to the 1070/1070ti Founders Edition and would keep it well below 50c at a moderate fan speed.

The Frankens Edition in all its glory on the wall-mounted test bench.