There comes a point in any PC’s life when you know that upgrades just won’t cut it anymore, and a complete overhaul is required. Whether it be from an aging motherboard that is no longer on the bleeding edge of CPU socket sizes, or a case that was released years before the concept of see-through side panels were a thing. And USB 3.0.

“You mean, we get to see the bits of silicone underneath the panel? Well, I guess Mr. Dylan was right, the times they are a changing.” 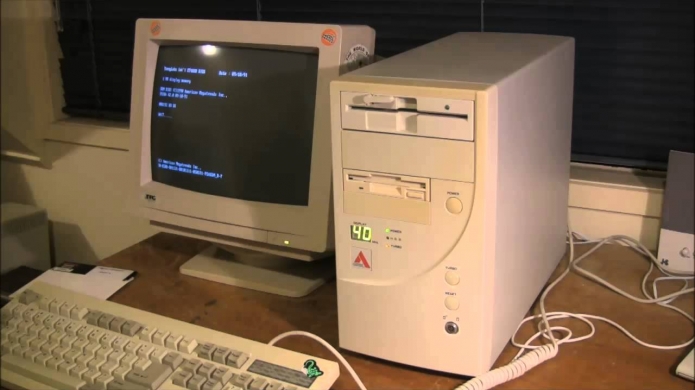 But really, when it comes to the point when you’re starting to run games on the medium and lower-end of the visual settings spectrum you just know that everything from your RAM to your CPU to your GPU needs to be replaced in the holy trinity of PC upgrades. At AusGamers there has been a shift toward reviewing console versions of games in the past year because, well, our PC was just not up to scratch.

Well overdue for an upgrade, we’re talking about USB 2.0 front panel ports on the case. A motherboard that sometimes blue screens when you plug in a headset on the on-board audio connections. A GeForce graphics card starting with the number 7. Yeah, the list goes on. Not even Scotty from Star Trek would want to have a crack at fixing this. Although his solution would probably involve rerouting power from another room for some reason.

No longer fit for upgrade or any sort of single-part replacement, we decided to start from scratch. Build a proper gaming rig, nothing too insane, but with a focus on gaming. And do it, you know, from scratch. Don’t recycle any parts. Not even the SATA cables. Forget those guys. Nothing, zilch, not the keyboard, nor the still relatively new 27-inch 1080p monitor. Or, even use the same power or HDMI cables.

Okay, so maybe the same power and HDMI cables. But, you get the idea. 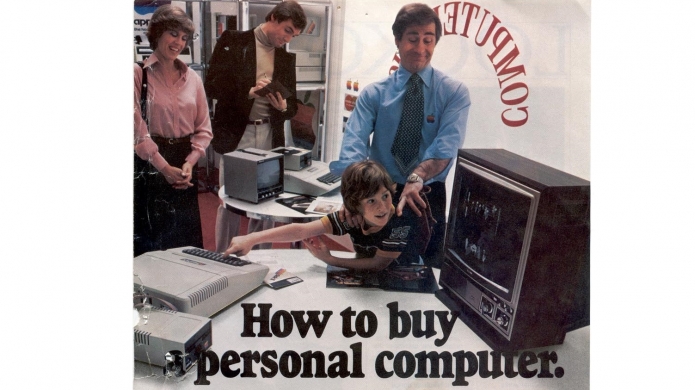 Over the last few months we’ve been working closely with suppliers and hardware makers to do just that. Build a new gaming PC from the ground up. Just like the Ancient Egyptians did when they decided to follow the orders of aliens calling the shots and erect a large pyramid in the desert. Okay, so this is nothing like that. But at the end of the day it can run Assassin’s Creed Origins at a steady clip. And that’s set in Egypt.

So here it is, Part One of the build story…

Step One – The Brains of the Operation 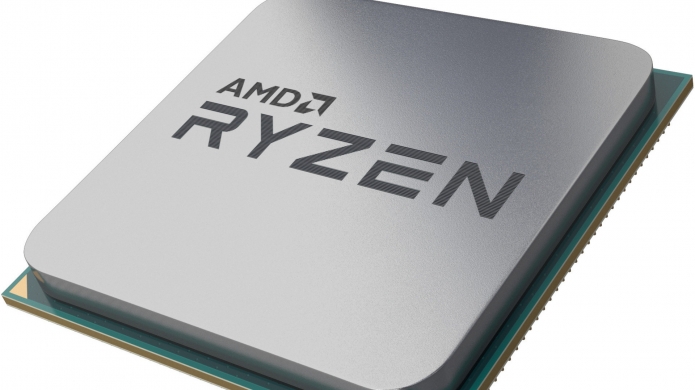 
And no that’s not header about me, even though one could clearly understand how you made that mistake. No, it’s reference to the brains of the computer - the CPU. That thing that became common knowledge to the masses with the release of the first Tron film by Disney. The CPU was the dude in charge of the weird-lighting world.

It was only by chance that when we started looking at building the AusGamers 3000 that AMD once again became a force to be reckoned with in the CPU market. Thanks to its new multi-core line of Ryzen CPUs. Make no mistake about it, for the past few years when building a gaming PC most people would quickly end the CPU debate by choosing from either i5 or i7 from Intel’s line of CPUs. The clear market leader until a few months ago.

In the lead-up to its release there was a lot of hype surrounding AMD’s new Ryzen line of CPUs, with pricing, performance, overclocking capabilities, and the future-proof multi-core design at the forefront. 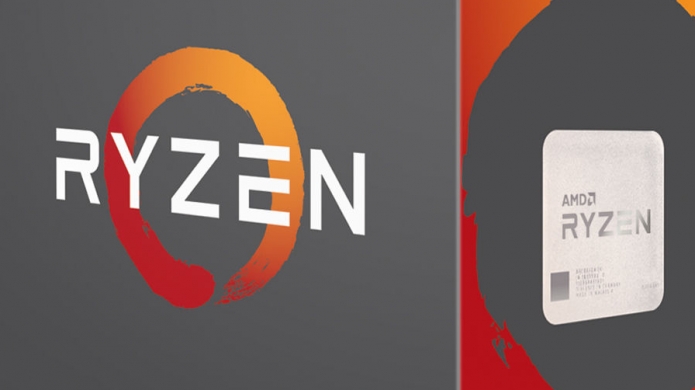 We’re happy to report that the legends are true, the Ryzen CPU is quite something to behold. When it comes down to it, high-performance multi-core CPUs aren’t exactly necessary to run the latest games, and the price-point has for the most part been the barrier for the point of entry. The Ryzen effectively changes all that, offering outstanding performance for a relatively low price.

So, what makes up the Ryzen 1800X? Well, thanks to the new 14nm manufacturing process you get 8 cores, 16 threads, and a base clock speed of 3.7GHz. Which can easily push 4.0GHz at 95W. Other models in the Ryzen line offer lower base and boost clock speeds, but no matter the choice it’s an all round great CPU. The fact that it offers 8 cores for a relatively low cost means that starting next year we should see the benefits across a wider range of PC games. Because it’s about time that most titles embraced and took advantage of multi-core CPUs.

Step Two – The Board is Set, Pieces Moving 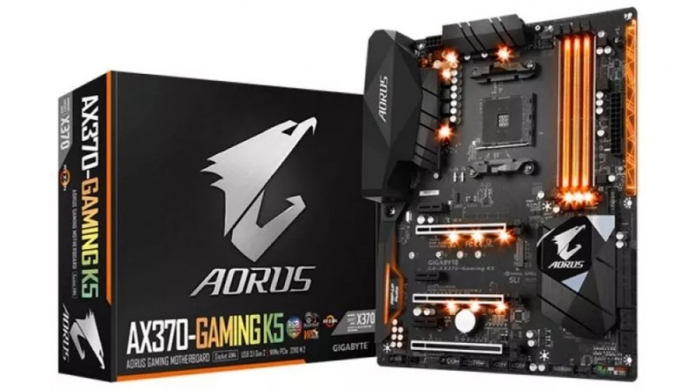 
When getting a new CPU, the next step is to pair it with a motherboard. Like eating cheese and drinking wine - the two must go together. Otherwise you’re not doing it right. As fans of Gigabyte boards for a number of years, choosing the dark and luminous AX370-Gaming 5 mobo to pair with the subtle yet powerful tones of the Ryzen 1800X was a relatively easy one.

Anyway, skimping on a motherboard if you’re building a gaming rig is never a good thing. Or a wise thing. Or a smart thing. Being able to have direct access over memory speeds and clock speeds on the CPU is a definite plus – as is getting all the goodies that come with a decent board. Like multiple high-speed USB ports, multiple SATA ports, well-placed fan connections, and everything laid out in a manner that’s designed to look good too. That and high-quality parts used in manufacturing. Which always helps when every little thing you connect doesn’t come cheap.

For the AX370 you essentially get the goods.

You get the picture – the GIGABYTE AX370-Gaming 5 is feature packed and designed for high-end gaming. And really, our only complaint is that the M.2 placement is below the main GPU PCI express slot can cause some heat issues. The Crucial M.2 SSD we put there runs about 10-15 degrees hotter than other drives.

Speaking of hotter, it was the arrival of this board that kind of changed the direction of the entire make-up of the AusGamers 3000. Which can be boiled down to three letters – RGB. Yeah, fancy programmable lighting at key points across the motherboard – the AX370 is the sort of hardware that makes the most out of any case with a see-through side panel. And even though we didn’t expect to enjoy the warm glow of coloured led lighting, turns out we were wrong. RGB lighting is, fun. They add a visual flair to PCs that didn’t exist until recently. And you can sync them up with a GPU or other devices, which is nice.

Overall, the GIGABYTE AX370-Gaming 5 comes highly recommended. Even if Gigabyte’s software isn’t the greatest we’ve seen. Functionality-wise its perfect and has enough features, including great networking and on-board audio to make the most out of any setup. 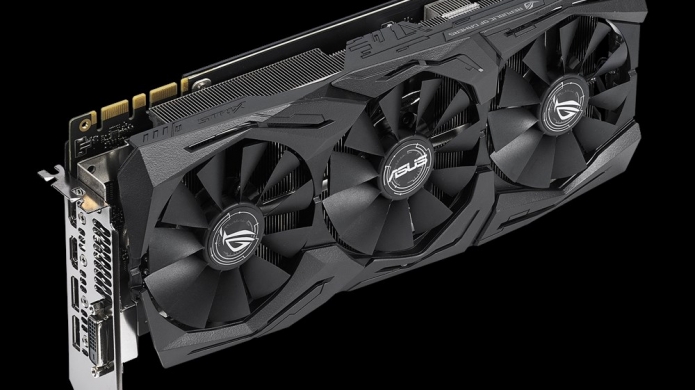 
Announced and released in the early part of November this year, the 1070 Ti from Nvidia was the expected follow-up to the 1080 Ti. The incremental yet meaningful improvement that brings the 1070 series more in-line with the base GeForce GTX 1080 in terms of performance. Especially when you factor in overclocking. Which the ASUS ROG Strix version does, and then some. In terms of physical real-estate it’s the same size as the 1080 Ti from ASUS but requires less power. The reason for this comes down to cooling, and in a remarkable feat of design this version of the 1070 Ti sits comfortably in the 65-degree realm under a full load. This is in a well ventilated and closed case too, with the card overclocked using OC gaming mode via the ASUS software.

But really, outside of the above it’s the performance that counts. And with the base 1070 being able to handle pretty much any game at full settings at 1080 with no issue, the 1070 Ti can do the same at 1440p and in some cases even 4k (or 2160p). Titles like Overwatch run extremely well at this resolution and even more recent titles like Destiny 2 can for the most part sit in the 60 frames-per-second range at 4K with the 1070 Ti.

A great GPU from Nvidia and ASUS. For our full review – head here. 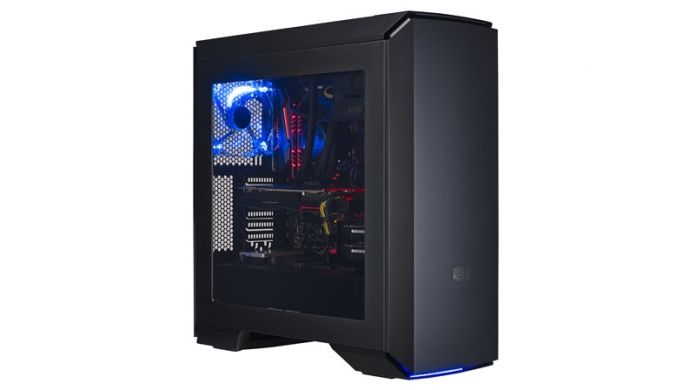 Case. CPU Cooling. Power Supplies. Fans. When building a new PC, the part list quickly grows once you take both the CPU and GPU out of the equation. For our gaming rig the choice was clear from the very beginning, Cooler Master. Makers of reliable cases, cooling, and power supplies for many years it only made sense to use the same brand to pretty much handle all our housing and infrastructure needs - so to speak.

But first, a word or two about liquid cooling. In the realm of both CPU and overall case cooling the rise in popularity and versatility of liquid cooling has been one of the bigger shifts in recent years. From not only an aesthetic perspective, but also for the more manageable size and sound. Or, lack there-of. But for those of us who grew up in a time when the idea of cooling a CPU meant putting on a bit of thermal paste and then a bulky heat sink and fan combo was on the cutting edge– the mere idea of putting liquid inside a computer sounds like insanity. 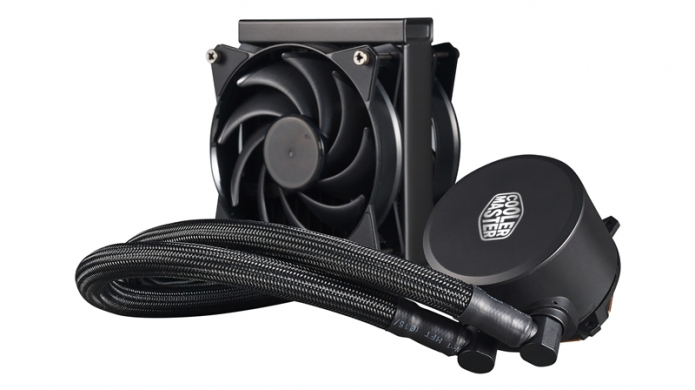 Okay, so with the Ryzen 1800X we knew that a stock fan or mounted cube of a heat sink was taking the easy way out. And after considering it, we came to the same realisation as quite a few people out there. That closed loop liquid cooling not only looks better and takes up far less room in the case, but is simple to install. And keeps the CPU as cool as Vanilla Ice in the hit ‘90s film Cool As Ice.

Setting up the MasterLiquid 120 is a breeze. Fasten it to the CPU and then screw in the radiator to the top panel of the case. Which makes things a lot easier. And to keep it inline with the theme of RGB-2017, we swapped out the standard supplied radiator fan that comes with the MasterLiquid 120 for an RGB-fan (also Cooler Master). That, once connected to the motherboard, syncs up with all the other RGB lighting. 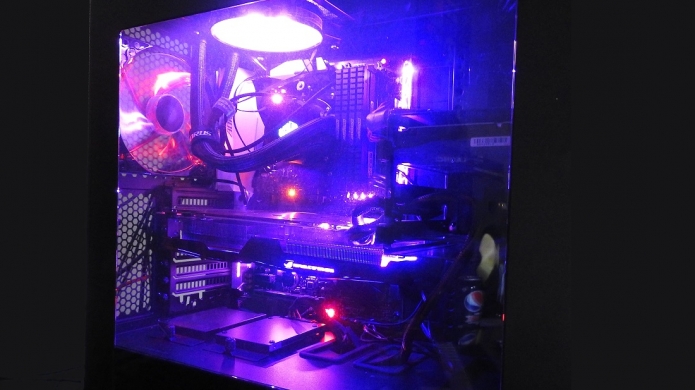 "Turn off the lights and I'll glow" #RGB4LYF

A must-buy for anyone considering a new rig, closed-loop liquid cooling is the definite way to go. Silent, easy to install, and doesn’t make your motherboard look fat.

Which brings us to the Cooler Master MasterCase Pro 6, a brilliant modular, solid, and versatile case that not only makes room for the core parts that make-up a gaming PC but also features room for more hard-drives, optical drives, and expansions than you’d think was possible for a mid-tower case. And as we tend to swap out drives, peripherals, and more, and keep a mix of solid-state and regular platter-based drives for stuff outside of gaming - the MasterCase Pro 6 turned out to be the perfect choice.

Also great, an entire side panel designed for easy cable management and access. A separate enclosure for the power supply. And the choice to remove and position the drive-bays wherever you see fit. In terms of power we went with the Cooler Master MWE Bronze 650 (price $89.00) – plenty for both the 1070 Ti and Ryzen 1800X.

Where we cover memory, storage, sight and sound, and interfaces - and benchmarks! We leave you now with some snaps of inside the AusGamers 3000… 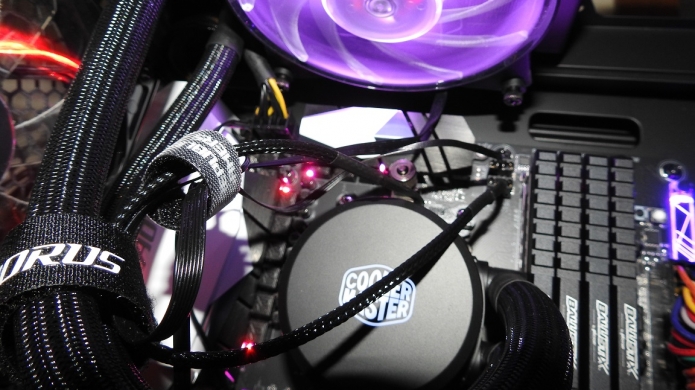 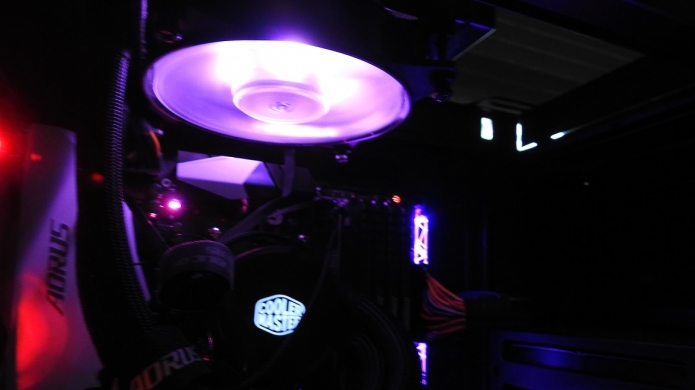 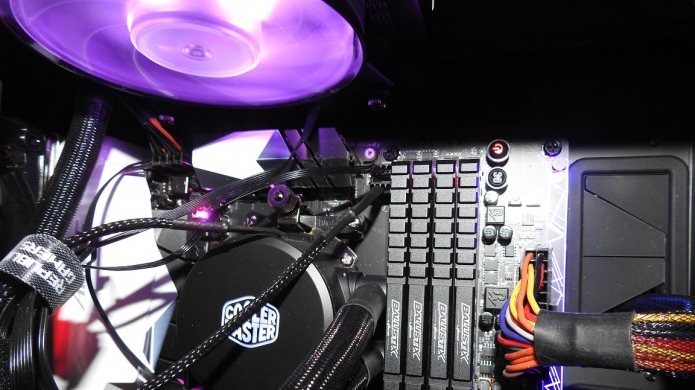 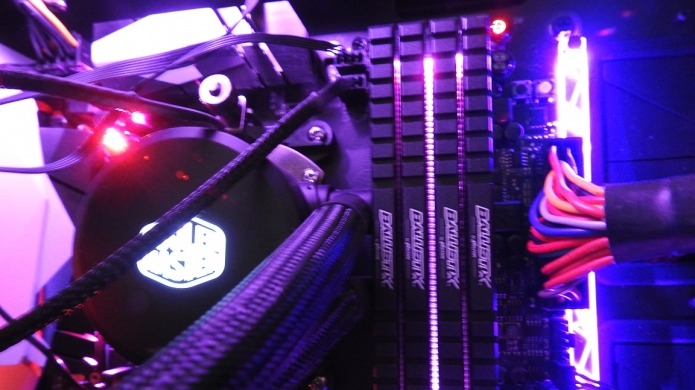 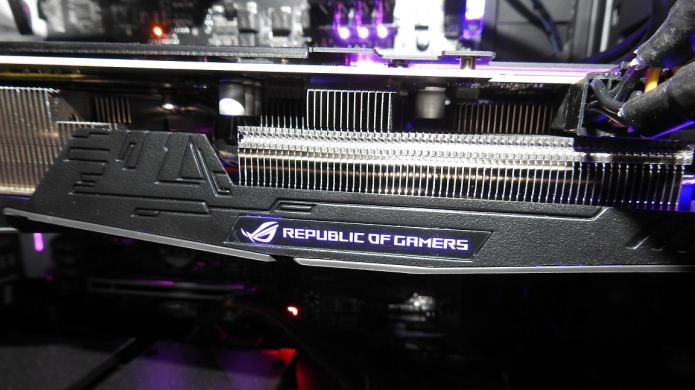 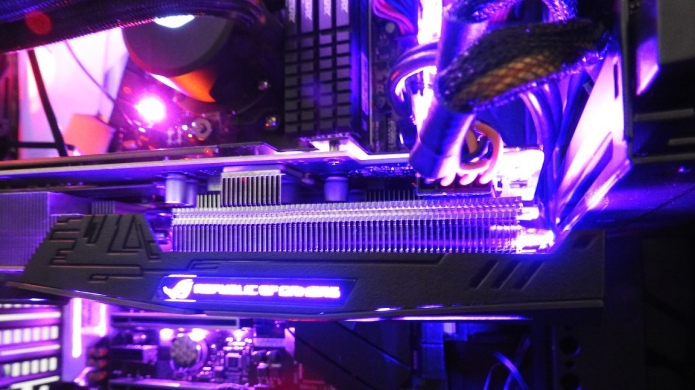 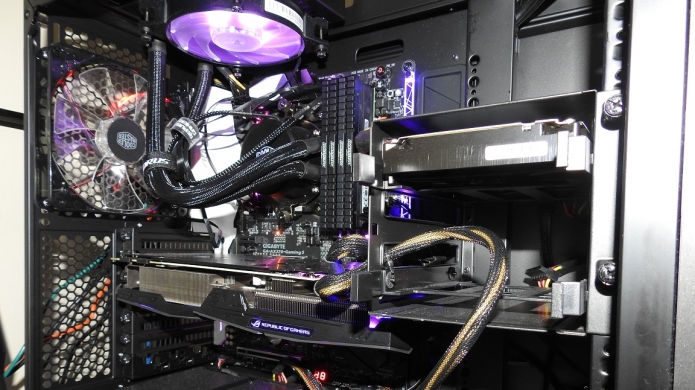 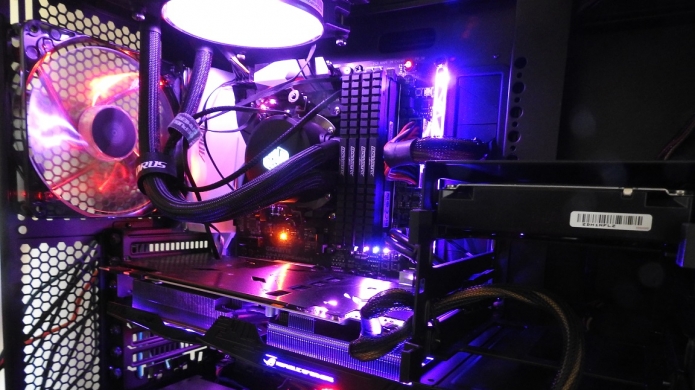