NBA 2K21 is the best basketball game around... but it's also the only one.
NBA 2K21 Review
Hands-On Preview: Wolfenstein 2 is the Death Incarnate Sequel You’re Looking For
Post by nachosjustice @ 04:50pm 29/09/17 | Comments
Machine Games escalates its Wolfenstein sequel in all the right ways to provide a satisfying follow-up to the rebirthed shooter...

I’m going to conveniently ignore the hell out of Wolfenstein (2009), not because it was particularly terrible (it was actually okay), but because there was no Doom equivalent. Machine Games, however, built a tight, exclusively solo, splicing of old-school shooting and contemporary mechanics in Wolfenstein: The New Order (2014). I’d argue that this paved the way for id’s 2016 Doom reboot, even more so because id had to go back to the drawing board on the original Doom 4 pitch, which was reportedly more like Quake II than Doom II. 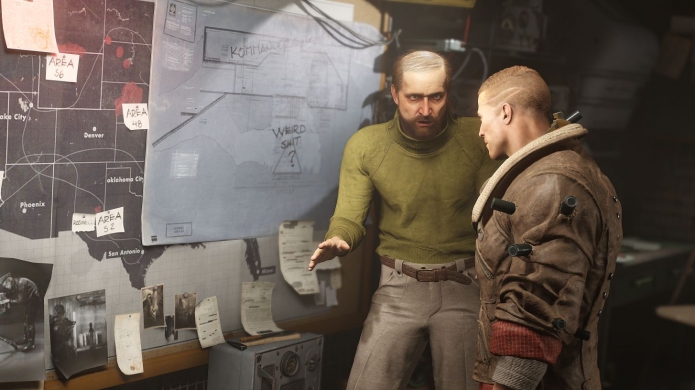 Who knows what id plans to do with Doom next, but as far as Nazi stomping is concerned, Wolfenstein II: The New Colossus is just around the corner. Recently, I had the chance to take it for another spin on PC. The first time I played, well, it wasn’t the best impression. Honestly, it was hard to tell the quality of the sequel because there were major issues with the code, most notably heinous input lag, to the point where it was more playable (though still laggy) with a controller. To put that in context, I’ve literally never chosen to play a shooter on controller over keyboard/mouse outside of this.

To reacquaint myself with Machine’s Wolfenstein between preview sessions, I returned to Wolfenstein: The Old Blood. Upon release, I really couldn’t get into it: I felt it was too slow, with too much of an emphasis on sneaking (read: padding) at the start, and the action set pieces weren’t as clever or open as The New Order. The second time around, I was a little more forgiving, but felt much the same way.

Fast-forward to my latest hands-on time with The New Colossus, and Machine Games nailed the frantic flow of gunplay almost immediately. That said, outside of defined boss-like sections, it seems Machine Games wants the player to at least have the option of stealth. There’s also a greater emphasis on mobility. BJ can blast through certain cracked walls just by sprinting at them. 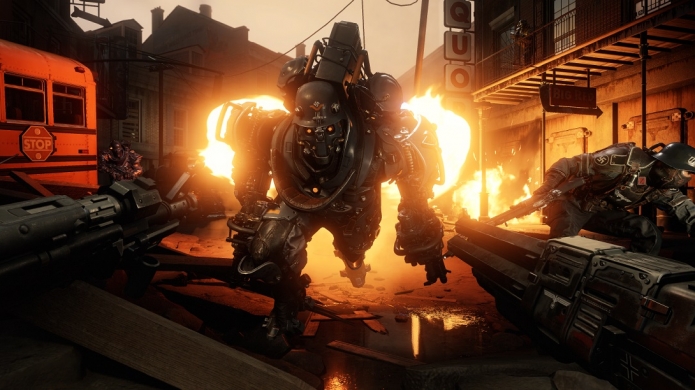 On top of this, BJ has combat stilts (no, really), which limit his forward momentum, but allow him to get up to higher places that would otherwise be inaccessible. They’re also particularly effective at getting the drop on Panzerhunds and dealing extra damage to the weak point on their back. This is exactly where Machine Games take on Wolfenstein has always been at its best: when it’s throwing options at you for how you want to clear a particular section of the map.

I was gifted a number of weapon upgrades, and it’s great to see that these upgrades can not only be enabled or disabled, but that they change weapon handling, sometimes in drastic ways. For instance, converting your Maschinenpistole (SMG) into a nailgun sounds great on paper because of the additional damage, but it nerfs the projectile speed, which means you need to lead your targets to land hits. Similarly, converting your trusty Sturmgewehr assault rifle into a sniper rifle is great for popping Nazi skulls, but it also restricts that gun to semi-automatic fire.

When you’re in the thick of the fight, you’re likely not going to have a chance to tinker with your weapon upgrades. While mulchy, the enemies are dogged in their pursuit of you, and fans of punishing difficulty will be glad to hear that even on Normal, The New Colossus won’t let you bullet sponge for too long, even if you’ve jacked your health and armour to the extremes. What it does do is force you to change your tactics on the fly. 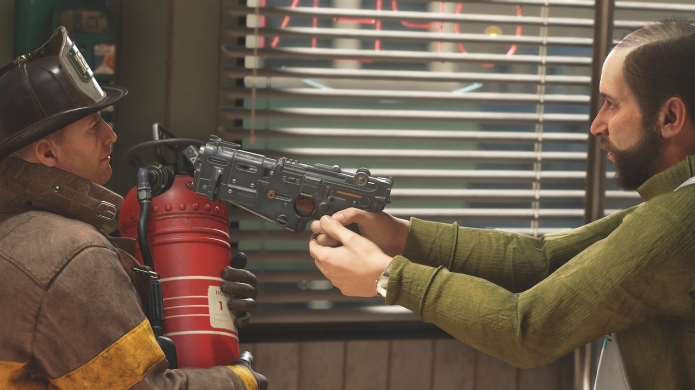 You can start the fight with the sniper-configured AR, then switch to your nail-firing SMG for mid-range, and the Schockhammer automatic shotgun for point blank ranges. That combination works very, very well. Alternatively, you can use dual-wielding, either of the same weapon type if you like symmetry, or two different types to boost your fighting versatility. As with The New Order, Wolfenstein II shifts the player between combat hubs of different sizes, each of which have multiple paths and approaches.

It was usually afterwards that I discovered a path I could have used to start things off stealthily, silently taking down Nazi goons with my trusty hatchet or silenced Pistole. But as a loud-and-proud player, I was more interested in discovering alternative routes while chasing, or being chased by, goose-stepping baddies. You still want to prioritise the lieutenants, who call for reinforcements once they know you’re nearby, if you want to deal with fewer enemies. The flip side of that is killing them early means you have fewer Nazis to shred.

Towards the end of my preview, I got to ride a pacified Panzerhund. When I say “pacified” I mean in terms of its taste for resistance-fighter flesh, not that its mechanical teeth or flaming breath has been neutered. This particular section of my preview seemed more like power-fantasy fan service than anything else, as it wasn’t particularly challenging. But that doesn’t mean it wasn’t fun. Scorching wave after wave of Nazi reinforcements was incredibly satisfying, even if it wouldn’t let me satisfy my digital sadistic urges and order my Panzerhund to chow down on them. Just me?

Moving right along, then.

The cooler part of The New Colossus is the storytelling and, even more than that, the genuinely engaging characters. Some familiar faces return from the original game, and even with my limited exposure to them, they all felt well developed and unique. More important than this, the storytelling is genuinely entertaining because Machine Games has upped the crazy alongside the dramatic stakes.

I got to see more of that LSD-loving character (from the reveal trailer) who’s tripping balls so hard he sees a little cartoon chameleon. Normally, it’d make zero sense that anyone would bring him along on a mission, but in this warped alternative reality where desperation abounds, it makes all the sense. I’m really hanging out to see the consequence of what happens when he chooses to take his cartoon chameleon instead of an assault rifle.

It helps that Machine Games has put a lot of attention into the world creation, too. It’s not that this wasn’t the case in The New Blood, it’s more that it’s been enhanced for The New Colossus. These quaint American towns with more than a touch of Hitler-loving décor are horrific, but make you want to explore and, say, listen in on the random conversations between two hick clansmen (openly walking in their KKK garb) practising German with an impatient Nazi guard. 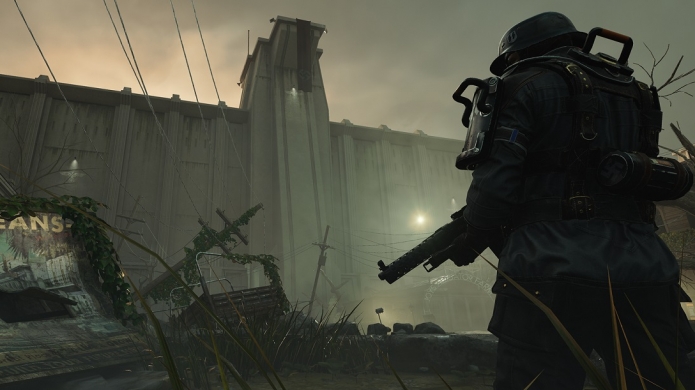 As a fan of the fantastic world creation of The Man in the High Castle series, it’s clear that Machine Games has been playing close attention to this series, too, and this attention to detail in the world creation helps elevate The New Colossus far beyond ‘lazy sequel’ status. I didn’t like that I had to press a key to pick up health, armour or ammunition, particularly when those items sometimes blend into the aftermath of a shotgun-cleared area. Outside of that, though, I’m pleased to report that Wolfenstein II: The New Colossus is well on track to providing even more crazy action hijinks than The New Order.