Forspoken is a game that consistently fails to deliver, despite some lofty ideas, and manages only to impress in the most obscure moments.
Forspoken Review - An Awkward Experience
The Most Powerful Necromancer Build for Diablo III on Console
Post by KostaAndreadis @ 04:06pm 11/07/17 | Comments
After a few weeks with the Diablo III Necormancer, we think we've put together one of the most powerful builds in the game.


Launching late last month, the Rise of the Necromancer Pack for Diablo III introduced the fan favourite Diablo II class into Blizzard’s existing, and relatively long-running, Diablo game. For those that have been keeping track of Diablo III’s progression over the years you’ll be well versed in the current end game that focuses on the now separate Adventure Mode. And the taking on of various Bounties, Rifts, and Greater Rifts to progress and get all the right gear. Which naturally, has led to a very refined meta for the current classes and countless legendary items and set pieces found in the game. 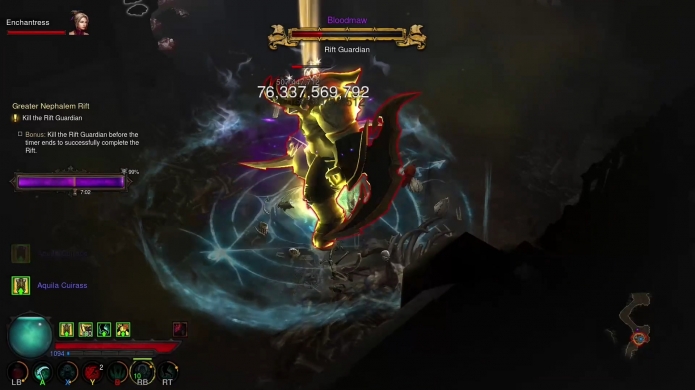 In my first hands-on piece with final version of the Diablo III Necromancer it was hard not to be taken aback by how much attention to detail was placed on the various playstyles and skills and runes and legendary items on offer. And how the design seemed to factor in both the years of refinement that the game has seen, and the relatively solid console version that now sits alongside the PC release in terms of new content, patches and of course Seasons. In fact, it could be argued that the console version of Diablo III is in many ways superior -- with this style of game working exceptionally well with a controller.

Okay, okay. Get to the Part Where You Can Rip a Greater Rift 75 to Shreds

When it came to the four green Necromancer sets, one expects to gravitate towards going for a pet build – where an army of the undead, skeletons, and giant golems, will do most of the damage and crowd control. But as is the case with starting any new character, what drops usually becomes the foundation for whatever build or two you’ll end up going for. For me, after coming up with the Automatic Corpse Lance Bone Spear Experience the goal was to up the on-screen carnage performance art with an army of reanimated corpses.
That was until a Primal Ancient version of the Grace of Inarius helm dropped. 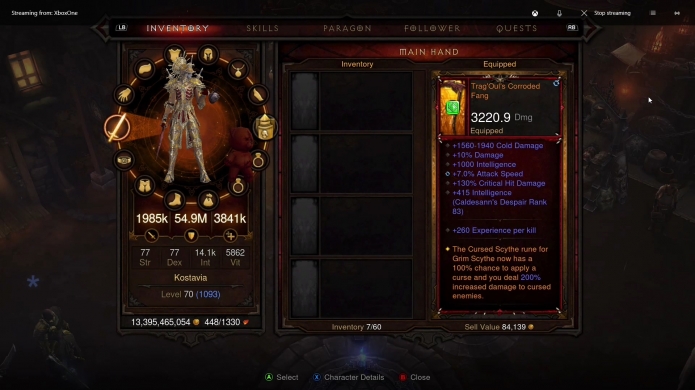 And this weapon too. Yeah, me got lucky

For those that are unaware a Primal Ancient is a recent addition to Diablo III where a legendary has a super slim chance to roll as Primal, where it has perfect Ancient rolls. Yeah, very awesome. And they only have a chance to drop if you’ve managed to clear a Greater Rift 70. With any character. So, a Primal Inarius’s Understanding kind of sealed the next build deal – a set that is all about melee damage and using Bone Armor for both Damage Reduction and a Sizable Damage Bonus.

But, it was the six-set Grace of Inarius bonus that required a second glance.

Bone Armor, while active, also creates a swirling tornado of bone, damaging nearby enemies for 750% damage and increasing the damage they take from the Necromancer by 2750%

It’s the second bit that’s particularly interesting as damage bonuses from sets are usually restricted to class skills. The wording here is clear, and the huge damage buff meant that experimenting with certain underused Legendary Gems can result in insane amounts of damage. The 2750% increase applied to a gem like Mirinae which causes flashes of Holy Damage results in numbers that can easily fall into the range of the hundreds of billions.

Doubly so if you get lucky and get two more Primal Ancient items for this build, which I did, in the form of Primal scythe Trag-Oul’s Corroded Fang and Primal bracers Ancient Parthan Defenders.

Behold, the Bones of Holy Light.

Okay so a set bonus is one thing, but as a whole this build is based on only really using the Primary Skill Grim Scythe and maximizing both Essence and Armor for, well, survivability. Hence the Ancient Parthan Defenders. Staying close to enemies at the higher Greater Rift levels is always a problem, and with this build not really having any issues on the damage front using curses is the key to both crowd control and staying alive. With one-two combo of Grim Scythe and Decrepify, managing regular mobs isn’t a hassle, but when you do get overwhelmed and want to take on a Rift Guardian using Land of the Dead with Army of the Dead for an impressive burst of both speed and damage is the way to go.

For a detailed look at all the items, gems, skills, and runes for this build, head here. Like with all Necromancer builds there are items that you can swap in and out depending on availability and preference. And in the end, it took about a week to fine tune the build into what you see here.

The great thing about this build is how well it adapts to become one of the more impressive melee speed builds in Diablo III. Creating a speed version of the Bones of Holy Light is really all about trying to fit in as many speed related runes, passives, and items into it before it completely broke. Whilst also integrating the Legendary Gem and Ring combo of Boon of the Hoarder and Avarice Band for use in Bounties and regular Torment 10 Rifts.
Turns out you can fit a slew of movement speed related items, skills, runes, gems, and passives:

Behold, the Bones of Holy Lightning.

A thing of beauty, isn't it. For full details on this version of the build, head here.

Note: A recent hot-fix has lowered the amount of legendary gem Mirinae procs by Bone Armor. Although a bug, the overall impact doesn't make this build any less of a beast
Tweet