As the latest LG OLED, the CX presents a high-end display that takes OLED technology forward in meaningful ways.
LG CX 65-inch 4K OLED - A Stunning Next-Gen Ready Display
Cast Your Line - Hands-On with Far Cry 5
Post by Steve Farrelly @ 05:00am 14/06/17 | Comments
Out at a pre-E3 event, AusGamers got hands-on with Far Cry 5 running on PS4 and, alongside some joyous redneck hunting, we also got to do a different kind of survivalist activity…


As soon as my dev handler pointed out that I could go fishing in Far Cry 5 and, specifically, in the vertical gameplay slice I was about to get access to, I put away my pistol, called my trusty Blue Heeler, Boomer (c’mon Alex Hutchinson, just set the damn game in Australia already), and set out for the nearest watering hole.

Survival has become a huge component of open-world action-adventure-RPG titles of late, with hunting animals for crafting and sustenance purposes a core part of the overall experience. You can usually shoot or slash them, or get traditional and take to them with a bow and arrow. But, and this is the clincher, there’s no fishing. None whatsoever. Even in The Legend of Zelda: Breath of the Wild -- a game that envelops living off the land, your fishing component is to blow them up or, literally, swim with them and pluck them from the water, despite previous Zelda games featuring dedicated fishing systems. 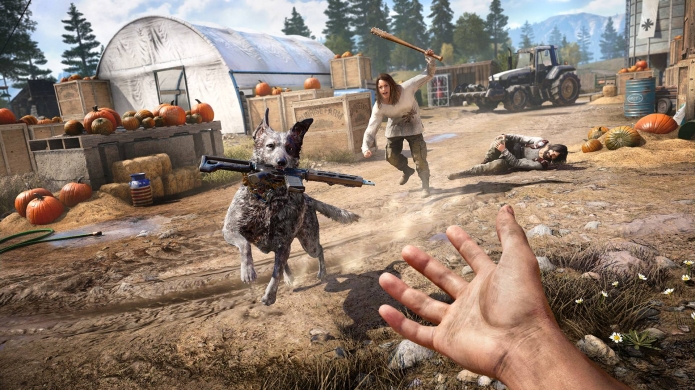 It’s been an annoyance to me for a while, especially in the Far Cry series. Primal could be forgiven because of the period in which it’s set, but ancient peoples had unique fishing traps and the like to use, so it doesn’t get off completely. But Far Crys 2, 3 and 4 had no excuse.

At any rate, because there is other game to talk about here (see what I did there?!), I just want to point out you can go fishing in Far Cry 5. You ‘borrow’ a spare rod from a fellow angler, and the fishing I got to do was of the fly kind -- simply aim your rod in the direction you want to cast, then hold down the right trigger and our Rex Hunt wannabe will skilfully fly cast three times before you let go and hit the water. From here, it’s a matter of massaging your line back in while watching the surface of the water for ripple evidence of eager fish eyeing off your lure. Feel a nibble in the rumble feature on your controller (not sure how this will work on PC), and hit a button to snag the fish and once you’ve hooked him, you’re up for a decent fight to land it.

What’s cool here is you need to play with the fish in realistic ways. You can’t reel in too fast or you’ll lose him, fight him too much and your line with break. You need to pull in the opposite direction he’s pulling away while teasing tension on the line; giving him some freedom here and there before reeling in harder and faster. The whole idea, if you’ve never fished before, is to tire him out so you can bring him to the bank and pull him in. It’s an exhilarating mini-game that is very quickly going to become a fan meta experience, so evidenced by the whiteboard in our demo room with the names and weights of the biggest catches so far during the pre-E3 hands-on experience. The biggest was 59 pounds, but I was told there are some monster fish out in the Big Sky country game-world Ubisoft has created here. 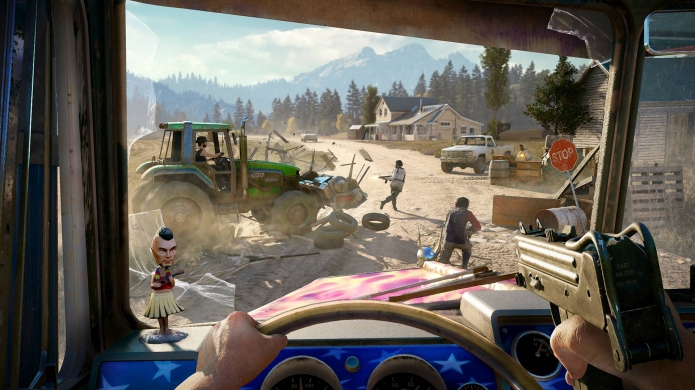 In the game’s many waterways, there are also numerous types of fish including Trout, Paddlefish and even Sturgeon (among many others) with the biggest I managed to land being a Paddlefish coming in at 51.94 pounds (23.5kg). And taking a look at the map in the game’s menu, there are going to be numerous opportunities for a break from hunting down the disciples of Project Eden’s Gate, which is probably where I should take the rest of this preview, considering I spent almost half my time at a watering hole, ignoring the chaos going on around me.

Our demo -- which is the same as the one shown at Ubisoft’s Pre-E3 Press Briefing, requires us to reclaim the cult-overrun town of Fall’s End. The game is set in Montana, but the places throughout are fictional, allowing Ubisoft to blend the absolute beauty of Big Sky Country with their own crazy character and location design. You have three companions you can take with you at any given time (alongside co-op friends, but we didn’t touch that in this hands-on), including the aforementioned Boomer, Nick Rye -- a pilot who likes to drop bombs on baddies and make things go boom, and Grace Armstrong who is an expert sniper and holds no love for the cultist rednecks who’ve overrun much of the game’s playspace.

As with all Far Cry games, how you approach any given situation is entirely up to you, and you have myriad gameplay options around player-choice. I decided to skirt the town and flank in from the west, using houses for cover. Once you’ve tagged the enemy, you can see where they are, making stealth a worthy option if you’re light on your feet. In my playthrough I stuck with Boomer who helped me quietly take down a few guards, leading me to a ladder which I climbed, only to find a mounted machine gun and an unsuspecting goon. After we took him out quietly we were left with two choices: jump on the mounted gun, or pick up the convenient sniper rifle nestled alongside it and keep the noise and commotion to a minimum. I chose the former. 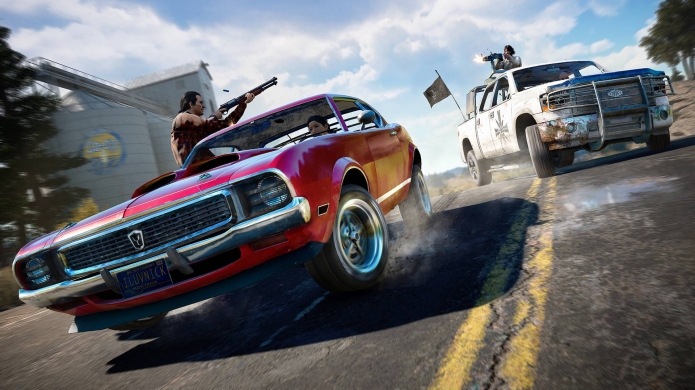 From my vantage point it was easy taking out the bad guys close by, and thankfully said vantage point looked directly towards a petrol station (or ‘gas’ to you ‘muricans), meaning a little patience on my end allowed for any reinforcements that arrived to be enveloped in a massive, fiery explosion thanks to aiming at anything explosive and flammable. The fallout from this was spectacular.

After liberating the small town, you can then go off and find Nick Rye’s place where he’s facing off against more goons. Interestingly, on the way to finding him I came across a bull mounting a cow… Ubisoft look to have really outdone themselves this time around in the realism department. At any rate, knocking off Rye’s attackers gives you access to his seaplane, which you then use to bomb strategic cultist placements, and eventually engage in an aerial dogfight with an ace cultist pilot. And yes, I’m really glad I wrote that sentence.

Far Cry 5 has a lot of the pillars of the series in check: various vehicles to drive and fly, myriad animals to hunt and watch frolic, whacky characters and locations, lots of weapons and big explosions. Also, there are no more radio towers to climb in order to unlock new areas, which is a massive boost for the series. It’s core narrative might appear a bit on the nose in the current climate, but this is hidden middle America, and off-the-grid communities who’re anti-government and anti-authority have existed for more than two hundred years. It’s nothing new, but it’s also something Ubisoft isn’t backing away from, and they’re having fun doing it, too.

This shit is as insane and fun as it sounds, and we seriously wouldn’t want it any other way.