A celebration of the long-running franchise and a great way to kick off Switch gaming in 2023.
Fire Emblem Engage Review - Strategy Gold
Star Wars Battlefront II Hands-Off: Return of the Content
Post by nachosjustice @ 05:00am 16/04/17 | Comments
A collaboration between DICE, Motive Studios, Criterion, and Lucasfilm has the potential to offer what Battlefront 2015 could not: a wealth of content.


To this day, I’m still a Battlefront 2015 apologist. I loved it, warts and all. In the same Vader breath, I get why plenty of others didn’t. DICE’s take on Battlefront definitely felt light-on in terms of content at launch, and the quality of the successive DLC drops bounced between impressive and phoned-in. When you fundamentally restrict yourself to the Original Trilogy, though – as reverent as that space is – it doesn’t exactly lend itself to a wealth of content in terms of heroes, weapons, vehicles, planets, and battles. 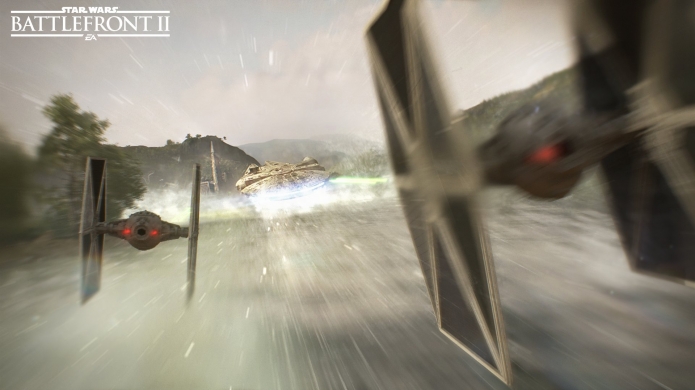 Despite its warts, DICE’s Battlefront is still my go-to example of a gameplay experience that makes you feel like you’re playing in the Star Wars universe. As a massive Star Wars nerd, that feeling holds a lot of (Republic) credit with me. If you had the opportunity to see what Criterion did with the short-but-immersive X-wing VR Mission, you’d see that DICE’s photogrammetry-driven visual fidelity mixed with Criterion’s understanding of vehicular handling makes for a compelling prospect.

This is particularly important when it comes to Battlefront II because it’s being developed by three EA studios. The best bit, if the behind-closed-doors press reveal of Battlefront II I just walked out of at Star Wars Celebration 2017 is any indication, is each studio is playing to its strengths. Though relatively new, Motive Studios has collected a crew experienced in making action games, and that team is focusing on Battlefront II’s single-player component. 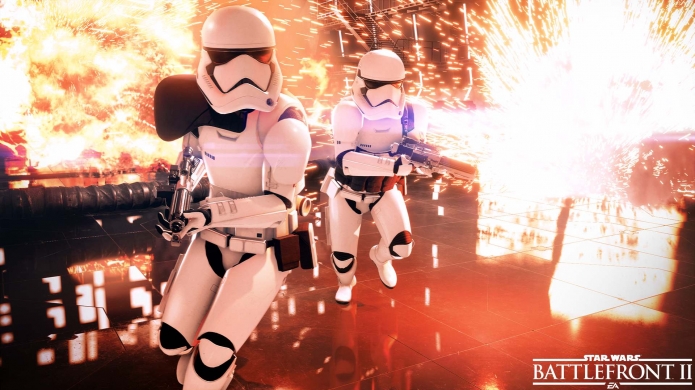 Yes, you read correctly: Battlefront II will have a campaign this time around. So, that’s one major gripe about the original game that EA is keen to rectify out of the gate. As mentioned above, Criterion has been brought in for its vehicular expertise, and specific mention was made of improvements to the handling of starfighters. Oh, and Criterion is working on space battles (finally). That just leaves DICE and, of course, the team renowned for epic multiplayer is in charge of Battlefront II’s competitive component.

The three teams collaborate with each other, and they also each work with Lucasfilm to ensure that the overall vision aligns with the custodians of the Star Wars IP. For those who saw the recently leaked 30-second teaser, yes, Battlefront II will cover all cinematic eras: prequels, original trilogy, and the newer movies. Given that the release date is set for 17 November, and taking into account how protective Disney is of movie leaks, I think it’s safe to assume that any meaningful Last Jedi content (which releases in December) will be relegated to DLC. 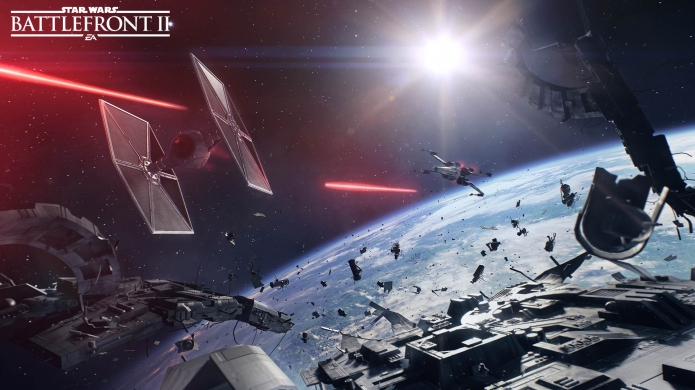 What I do know is that Motive's campaign is exploring an interesting space. Battlefront II’s campaign takes place at the end of Return of the Jedi, after the destruction of the Death Star II. Motive is continuing in Disney’s recent Star Wars tradition of centring the story on a strong female lead. Interestingly, this story takes place from the perspective of an elite Imperial special forces soldier whose job it is to seek vengeance in the wake of the death of Emperor Palpatine.

The protagonist’s name is Iden Versio and her voice/likeness/mocap is provided by American actress Janina Gavankar of True Blood, The League, and Sleepy Hollow fame. I also spotted Paul Blackthorne (Quentin Lance in Arrow) as another potential member of Iden’s Inferno Squad. Motive, it seems, has taken a leaf out of ahead-of-its-time sci-fi space drama Space: Above and Beyond, and created a type of Imperial soldier that is both ace pilot and gun soldier. 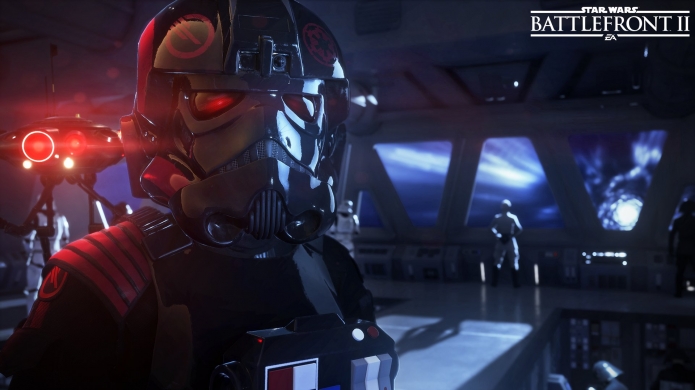 This has Lucasfilm’s blessing, but the reasoning behind this decision seems to be more for gameplay purposes than narrative reasons: put simply, it allows players to seamlessly shift between starfighter and infantry missions, without the need to use an anthology format (which recently featured in Battlefield 1). While you can expect to play the bulk of the campaign as Iden, the panel teased that you will also play as familiar cinematic characters, including Luke Skywalker and Kylo Ren.

The addition of Ren suggests that the campaign extends from the end of Return of the Jedi to at least around the time of The Force Awakens. Hopefully, this means it’ll be more than your usual six-hour bolt-on affair; on top of this, it should mean that the campaign feels less like multiplayer training and more like something that stands on its own legs. 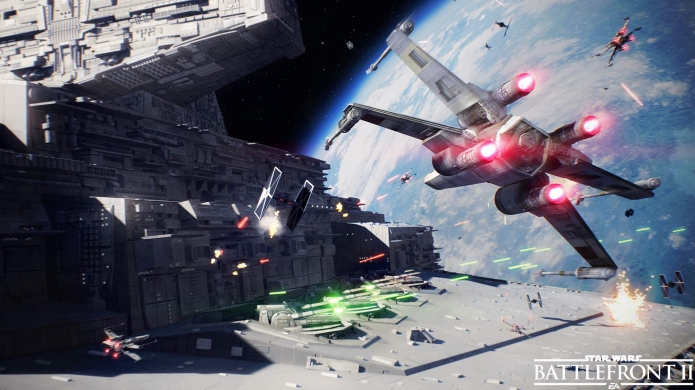 Despite this, the panel teased the idea of gadgets, without the mention of Star Cards (which were a big part of the last Battlefront). These gadgets will play a role in offering tactical possibilities in the campaign, with the most obvious one being a currently unnamed droid sidekick for Iden. The droid looks like a miniaturised version of a probe droid. It communicates in R2-like beeps and, at the very least, appears to have the ability to be used to electrocute targets of interest. Whether this is controlled by the player in a Ghost Recon Wildlands-like fashion or droid AI is yet to be revealed.

Gadgets are particularly interesting because creative director Bernd Diemer (from DICE) mentioned they would appear in multiplayer. To help keep things fresh and elevate the player above being a mere trooper, there’s a progression system and defined classes (though nothing more was said about classes beyond their existence) in Battlefront II’s multiplayer. From what Diemer described, it sounds as though progression may apply to individual matches, as well as more meta-focused unlocks. For the latter, this progression will understandably apply to a player regardless of which faction they’re playing on and in which era they’re fighting. 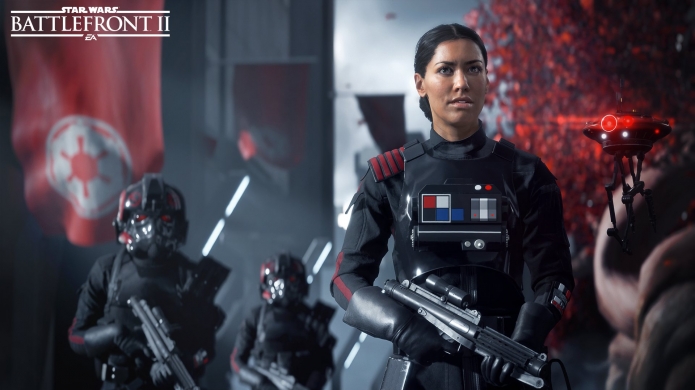 Diemer went out of his way to say that the factions will change based on the planet and era, which will help to add, at the very least, a sense of visual diversity beyond the same Rebel Alliance troops battling against familiar OT-era stormtroopers. The in-match progression is tied to a resource-based system that lets players choose to spend resources on transforming into a hero/villain or vehicle.

This topic wasn’t explored in great depth beyond Diemer’s clarification that this means hero power-ups are gone. This alone is a wise move given how predictable their spawn locations became in 2015’s Battlefront and how tricky it was to become a hero when players camped those spots. Considering Diemer specifically mentioned the importance of teamwork, it means that Battlefront II has the potential to deliver team-based modes that reward playing the objective more than they do selfish tactics.

If the resource-based system lets players spawn in weaker vehicles or heroes/villains early on or save up for heavier vehicles and more powerful heroes later, this will also add a tactical layer to how players choose to use their resources. On top of this, Diemer also teased the idea that, regardless of whether players are playing in a starfighter mode, slumming it as a regular trooper, or enjoying the power fantasy of being a hero, there will be unlocks for everything. 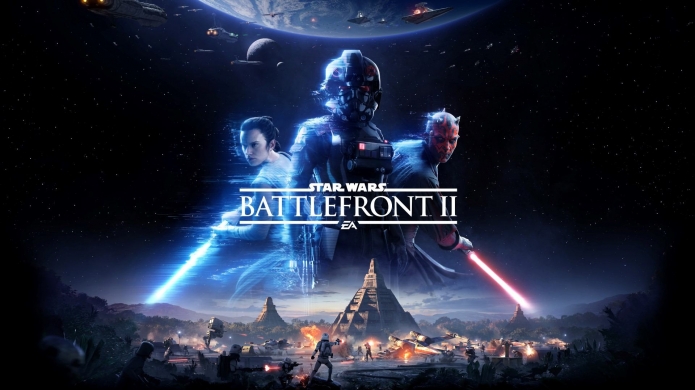 For instance, vehicles and heroes can now unlock new abilities, but it’s not clear at this stage whether that’s part of the overarching progression or something that happens on a per-match basis (or a bit of both). What is interesting is that heroes are set to be a little more practical and less powerful, with Diemer teasing that a levelled-up squad of troopers might be able to go toe to toe with, say, Darth Maul. Considering DICE wants to have more heroes/villains on the battlefield at the same time – something that was toyed with in Battlefront’s DLC – this could lead to more epic fights, and less of a feeling that you have to avoid or run away from an incredibly overpowered enemy hero/villain.

My interview is later this afternoon (US time), and it’s unlikely (at this announcement stage) that the interviewees will be willing to talk about the nitty-gritty of multiplayer specifics, especially for the PC community. Regardless, the promise of a canonised story, plus the content potentiality of three eras of Star Wars movies, is definitely a step in the right direction for Battlefront II.