We sit down with Typhoon Studios’ Alex Hutchinson to talk about the studio’s first game, comedy, co-op, and striving to be the fourth-best.
Journey to the Savage Planet - Developer Interview
Survival of the Fittest - No Man's Sky Vs Subnautica
Post by Steve Farrelly @ 08:25pm 12/08/16 | Comments
No Man's Sky has managed to gain most of the media attention, but Subnautica presents a solid case as a game worth just as much. Read on to know why...


You know it’s interesting, scientists have a saying that suggests we know more about space than we do the depths of our own oceans. Each year we discover more than 1000 new marine species, and these aren’t just of the small, crustacean variety. Over the past decade, we’ve added more than 100 new varieties of sharks and rays. In 2014 two new dolphin species were discovered and, the World Register of Marine Species adds new marine animal findings to its database, daily. The ocean truly is the last terrestrial frontier for humankind.

Obviously we’re yet to find life outside of our own planet, but the odds stack heavily in our favour that we will, be it microbial, carbon-based, intelligent or in realms we can’t possibly comprehend. It’s estimated that between 10 and 20 billion potentially habitable worlds exist within our own galaxy, and our galaxy is just one of an estimated 100 billion in the observable universe. This is largely looking at planets inhabiting the Goldilocks zone, too. Moreover, every year we discover more and more extremophile life-forms, organisms that, by our understanding, shouldn’t be able to live where they do, let alone thrive. The most extreme case of these diehard life-forms is the Tardigrade (or “water bear”), an animal capable of living in near absolute zero freezing temperatures, to well over the boiling point of water. They’re also the only known organism from Earth capable of surviving in the vacuum of space -- they might be the closest thing to aliens we’ll find before E.T. gives us a call. 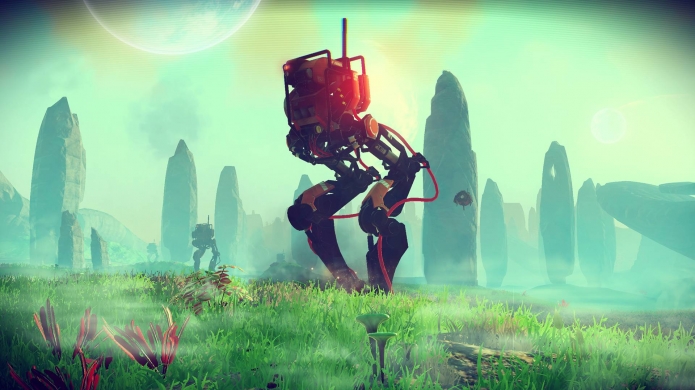 In terms of fantastical investment from an exploration perspective, both our own oceans and space represent the best unknowns, and it’s with these two frontiers we compare two games boldly taking us to places we desperately want to go.

No Man’s Sky is currently the talk of the industry. This is a good thing for such a small team who had lofty ambitions. Review scores are trickling in, mere days after release though -- a little too early for mine, because there’s simply so much to explore and learn within the game that scores can’t possibly be accurate just yet. But I digress. What No Man’s Sky represents is an explorer in all of us, while having to adhere to concepts of practicality such as being able to travel across planets, between planets and beyond solar systems to find new planets. It takes construction and resource gathering seriously enough that they become your job; the means by which you can afford to travel between the stars on mystery vacations. It offers us a seemingly infinite universe to explore, where all you need to get from A to ℼ is a hyperdrive fueled by Antimatter and Thamium9 (to make a Warp Cell). Mysteries present themselves and, as you slowly decode an ancient alien language, your own mark on your trails is left with funny system, planet and neighbourhood names, created by you for the world to see.

Subnautica is, conversely, one-percent of No Man’s Sky. In scope. 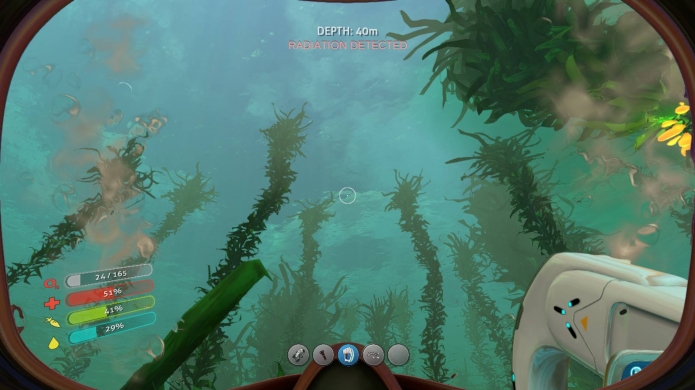 While NMS has you scouring multiple planets across myriad systems, Subnautica gives you one -- a water planet where you’ve become an abandoned alien on a hostile world. Your starship has crashed into this ocean planet and its nuclear core has exploded, irradiating a massive chunk of the explorable space now within your vicinity. Similarly to No Man’s Sky, you have the ability to craft items by harvesting natural resources such as copper, titanium, lithium, lead et al with your Fabricator to create items required for crafting. Equally similar between the games is the requirement to find, or earn, blueprints to craft more and more advanced technologies -- one for helping you explore the universe, and the other for helping you explore a reef.

Clearly one game being about exploring space with the other an ocean world is a differentiator, but that’s more aesthetic than anything, so while they have similarities in their foundational gameplay loops: gather, craft, earn, advance, repeat, there’s a large difference between them that isn’t as obvious as you might think. And this comes by way of the explorable spaces themselves. In No Man’s Sky every system and world you encounter is procedurally generated. This means they have a list of ingredients floating around in the game’s matrix, and each time you visit one, these ingredients come out in different manifestations. But, by and large, each one follows specific requirements for the game’s gameplay loop to function: find Signal Scanner, create Bypass Key, search for Monoliths, Colonial Outposts, Transmissions or Shelters. Visit them, gain blueprints, learn alien words, fix broken systems, interact with aliens, dabble in intergalactic market. Move on. 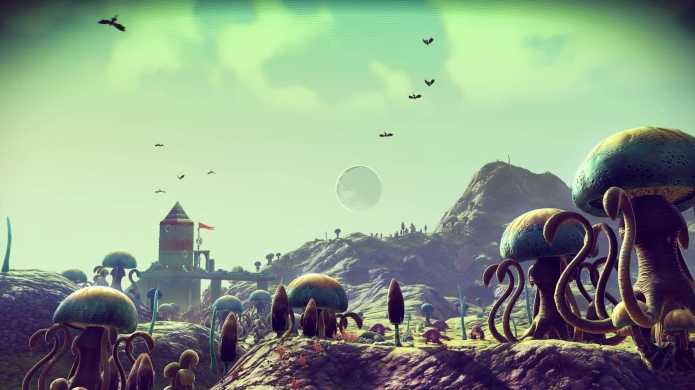 In Subnautica you need to survive first and foremost, and depending on how you decide to play the game, this can become your driving force. Survival Mode requires you to monitor your water and food, along with your health. Bearing in mind, that this is an ocean water planet, so you also need to craft your own fresh water, and your food and water deplete relative to game-time. Exploration of the alien depths isn’t to uncover an ancient alien race, or learn its language, it’s to find parts of your downed vessel to learn how to craft better digs; it’s to craft new and more extensive equipment to lighten the load on your personal micromanagement; it’s to thrive. You’re a stranded survivor, each and every day you need to tackle new tasks to make life as comfortable and sustainable for you as possible, and as such this alien world becomes your new home. And it’s here the game’s truly split.

It’s fair to say in No Man’s Sky, you’re a drifter. No place ever feels like home, and it’s the ever-expanding journey that drives the player. But the repetitive nature of the game’s systems stacked against a non-persistent game-world warps player-attachment. You’re not wholly making your mark on, and in, the game. It’s like someone gave you a join the dots puzzle, with no clues or numbers and told you to make it up as you go along. In Subnautica, however, your mark is an indelible one. The game-world becomes an intimate frenemy as you learn which direction relative to the hulking crashed starship sews what resource. And you pride yourself on knowing how to get the most out of each resource-gathering outing. Your attachment to the world builds from this knowledge, and from building. You might be lost and alone, but you can still create wondrous underwater lodgings, and do sick things like build fishtanks in them, right next to big walls of glass, looking back out into the ocean you just fishnapped your new pets from. Enjoy your new home, Dory, and say hi to Nemo as he swims on by. 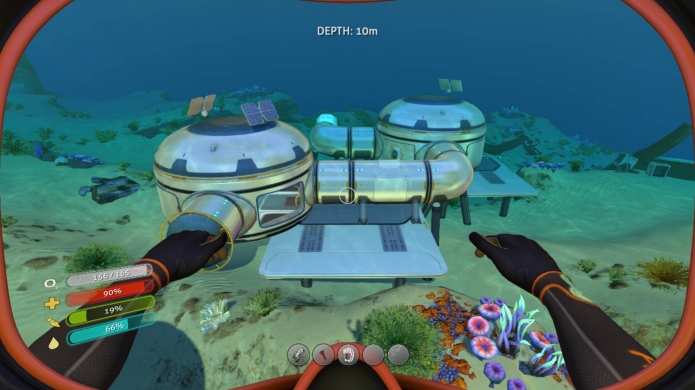 And there’s a mystery to Subnautica, too. There’s a Heat Signal constantly calling to you (I haven’t gone to it yet, so no spoilers in the Comments, please), while your telecommunications periodically drop you cryptic and strange messages. There’s the lingering question of why your ship went down, and where it was going in the first place. It rarely holds your hand too, and while it’s in early preview stage, the core gameplay systems are already near-perfect. It’s an incredibly gorgeous game that doesn’t need to flex a procedural tech muscle, and the visual flair here simply adds to that player-attachment mentioned earlier. No Man’s Sky is a technical marvel, don’t get me wrong, but it’s almost like marveling at a machine that can combine every word in every language together to create unique sentences. After a while, you won’t care what the sentences say because they won’t apply to a whole (and yes, I acknowledge that there is an ancient alien mystery, or ‘story’ in NMS, but it’s incredibly lite-on when stacked against the scale and perceived diversity any such star system jumping reality would present).

At its core, No Man’s Sky is lofty in ambition, but barebones in substance. It’s not hard to survive in the game, often making the weapon and shield upgrades superfluous and annoying because of the inventory space they take up. It’s a repetitive affair that tries to hide said repetition through aesthetic uniqueness, but really, visit one planet in the game, and you might as well have visited them all. The game’s biggest strength so far is in the oft challenging space combat, and it’s in this area it truly shines, but these are few and far between unless you decide to play like a jerk and attack everyone, and everything, you see. It’s not a measured game, and while you have all the choice in the universe to play it how you like, there’s no hiding the fact that, generally, no matter where you are, you’re going to be doing the same thing. 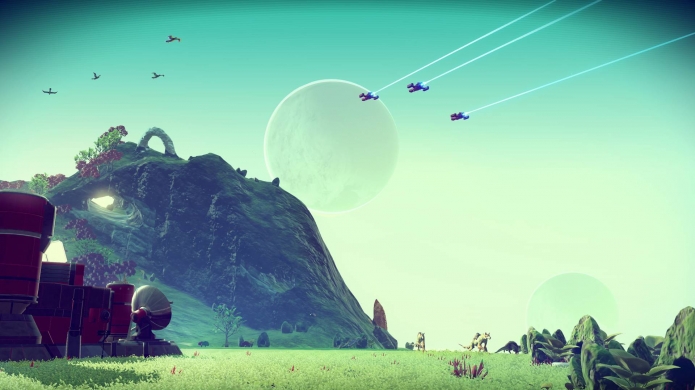 Subnautica is similar in its survival traits, especially where resource-gathering and crafting is concerned, but it’s an absolutely measured experience that ties the player to the player-character plight, and gives you a living, breathing persistent playspace to live in. The incremental paces you make as you journey through its watery make-up feel rewarding, and thriving in such a hostile world is a far more tangible goal than just star-jumping. If you’re finding the grind of pressureless space too much, bear in mind that there’s another survival option out there, and even at its preview stage in development, it’s presenting itself leagues above everything else.
Read more about No Man's Sky on the game page - we've got the latest news, screenshots, videos, and more!
Tweet