We've taken Kratos and Atreus on an almighty journey in sequel territory. Is it as good as the OG?
Realms Apart | Our In-Depth God of War Ragnarök Review
Defeat the Kraken - Exploring Sea of Thieves with Rare's Gregg Mayles and Joe Neate
Post by Steve Farrelly @ 04:58pm 18/07/16 | Comments
AusGamers caught up with Rare's Gregg Mayles and Joe Neate to talk mermen, treasure, treachery and pirates. Read on for what they had to say...


The concept is simple, and the theme is easy to grasp. So much so, that without a tutorial and with a bunch of randoms, I managed to play Sea of Thieves immediately, and sunk myself into its rich, player-driven world. The game -- an entirely new IP from Rare -- serves players with a game-world full of ‘piratey’ things to, and that’s the theme -- pirates. The concept then, is what do pirates do, and how would real-world players react to that? Then through said reaction, the game happens.

“We almost don’t have to tell players what to do because of the pirate theme,” explains Sea of Thieves design director Gregg Mayles. “You almost know because of watching films or TV, you know, growing up as a kid and wanting to be a pirate -- all these things you do in a ‘piratey’ world; the items you’ve got and and the equipment to do what you do, players already know [how to play].” 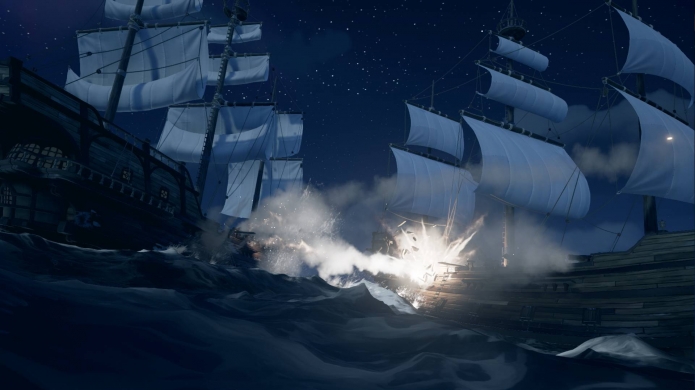 Honestly, Sea of Thieves was probably the game I had the most fun with at E3, and I only played roughly 15-minutes of it, but it’s packed with potential. The game is a series of systems and opportunities, which then require the player to determine how they all work together. Actually, scratch that. It’s not the “player”, it’s players.

“It’s a shared-world experience; a shared adventure game,” adds executive producer Joe Neate. “And what that really means is that every time you see a set of sails in the distance, that’s another group of players and you’re not really sure what their intentions are -- are they going to come at you? Do they maybe need help? Do they want to parlay, or trade, or anything else?”

It’s best described as a kind of co-operative experience, with a team-based competitive side, as well as a personal progression component. You’re sort of forced to play together and perform individual roles, specifically on ships, but as a pirate it’s not a hard and fast ruleset -- you get to play the game how you like.

“Some people will just want quests,” Neate says. “You know, “I just want to go and do this and be able to achieve something, and then come back and spend my loot on upgrading my ship”, or something.

“Some people will just want the social side. Get on a boat with loads of booze and loads of instruments and just [make] a party boat -- just sailing around and being stupid and having fun.

“Other people will just want to get into their ship, then find another ship and sink it. And that’s cool too.” 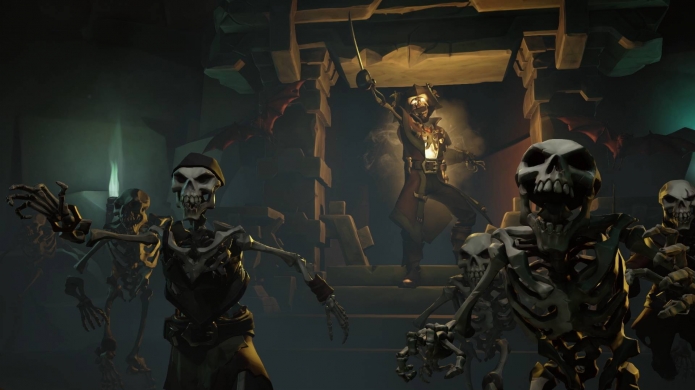 We did just that in our playthrough, and despite the game’s more cartoony appearance, there’s an underlying sense of technical prowess here, where physics are important elements to understand while taking on the high seas, and doing battle within them. It’s a maturity not seen from Rare in a long time, but we’re welcoming it back with open arms because this is a studio that has always been capable of creating just about anything.

“Every boat is owned by a player,” Gregg explains. “We’re going to encourage a dual role thing, like, players will own ships and you’ll be able to play the way you want to play on your ship, while we’ll try and incentivise players to go and play on other players’ ships; on your ship. [So] you’re basically recruiting a crew: “I’ve got this quest, I want to go and do this thing -- who wants to come and join me?”, sort of thing.”

The difficult element here is built around loss and gain. How do you make sure players are playing the game to earn personal rewards, while working within a team -- essentially a question needs to be asked: who really is the captain? The answer seems to be a consensus “everyone is their own captain”, because the system has been designed to reward that shared experience. And this is not an easy task in multiplayer/cooperative development.

“Right from the start we were very aware of ‘loss’ in this game,” explains Gregg. “You know, pirating is rife with stealing and looting and sinking ships and killing other players, and all of that behaviour is expected in a pirate game, so we can’t just say “well we’re not having any of that”. We also wanted a game that wasn’t overly punishing like a DayZ or EVE Online [where] you’ve got these shared roles where there’s a lot of loss and it’s permanent.

“So we’ve [been trying] to find the balance; the world needs to feel like there’s peril and you can lose your ship and you can die, but it’s not the kind of loss where [you’re punished unfairly].” 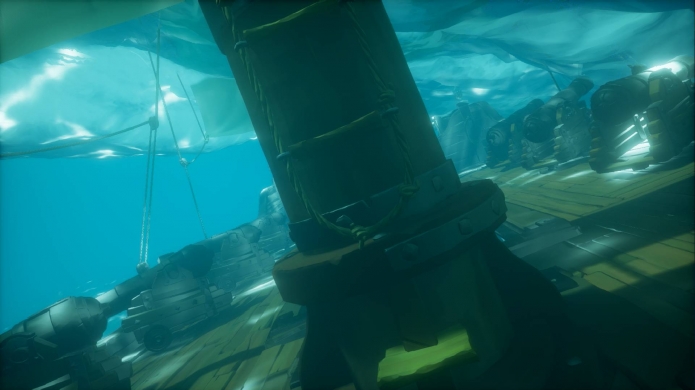 Sea of Thieves will enter closed beta soon, and one of the big takeaways from our session with the Rare lads was that even now, the game is still very much in its design infancy. And they absolutely want the community to drive how their myriad systems and game-world come together. It’s an interesting way to build out a Triple-A title because so many people have varying ideas of what the “freedom of being a pirate” means. I, for example, expressed concern that I couldn’t build trust with a group of players and then just turn my back on them and take any shared loot for myself, likely by killing them all which, I argued, could work towards how you’re perceived socially in a shared world. Like a risk-reward system driven by the players, rather than in-game rules. But they explained they’d already been down my cowardly route before.

“Initially we, somewhat naively, allowed players to do absolutely anything, we just said “right, you’re pirates [so] you should be able to do anything”,” Gregg explains. “And for a while it was great -- crews would operate and sail together, they’d get to an island, dig up some treasure and then they’d shoot each other. So almost 100% of the game was ending with crewmates shooting each other, and these people knew each other, it was the dev team working together; all friends outside of work, but as soon as they got some treasure they were trying to work out ways to take out their own crew to take their treasure.”

“And it’s all personal treasure,” Joe chimes in. “It was all personal reward, so there was no incentive to not do that and it got so infuriating, because you go on this amazing cooperative adventure and you’re building a bond with all these people and then somebody would just fuck you over, and you’d be working with that guy.”

They landed on a solution by looking at all of things that promoted this deception, such as friendly fire, and took it out, but they then replaced those with positive things such as social rewards for being cooperative and it changed the experience for the better. And the rewards system became a crew-wide reward rather than an individualised one, which naturally stopped the subterfuge.

While there’s obviously a strong emphasis on teamwork and player camaraderie, the world isn’t always going to full of other players for you to engage with as a group of five (which is the “magical” number they landed on for a friendly crew of pirates). And they also danced around player-numbers and how their multiplayer system works, but given they have the full strength of Azure servers behind them, there’s probably something decent driving the player population side of things. 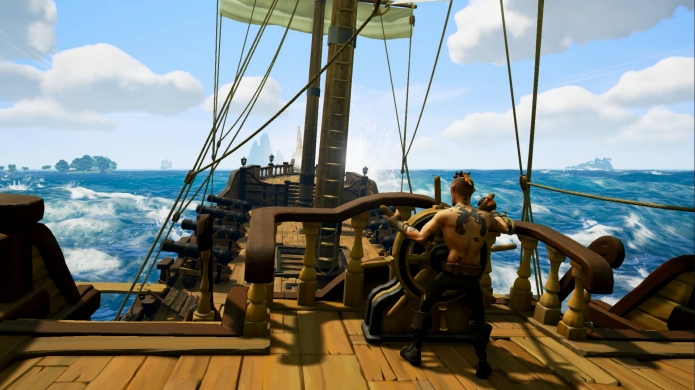 “There’s no safe areas [and] we have no concept of PvP -- it’s all one shared world,” Gregg adds. “What we do is… there’s no guarantee in the world, it’s an emergent world. You know, [we] can’t guarantee you’re going to see another ship and that’s the beauty of the game, you know, when you’re sailing around you might go for an hour on adventure with a crew and never see another ship. It’s a kind of lonely-in-a-good-way experience where you and your crew are just having fun together on your ship. But then the next time you go out you might see a ship almost straight away, or you might see two ships parked at a port. So that’s where we see the beauty of the game -- every time you go out there you might have a mission or a quest where you know what you’re trying to achieve, but you’re never quite sure what you’re going to find along the way.”

Balancing what any of this “lonely-in-a-good-way” gameplay is, against tangible questing and looting is going to be interesting, but the guys assured us the world will be full of things to do, and will be filled with plenty of dangers such as sharks, undead, mermaids a kraken and more, but how they occupy a persistent space and how it’s all shared remains to be seen. We’re heading to Gamescom so hopefully we can get more answers there, and hopefully the closed beta isn’t too far away after that.

It really is a difficult game to relay without you actually playing it, but as a shared, unique co-op and multiplayer experience, it’s one of the most refreshing new IPs in a long time. I’ve already assembled a crew of treasure-thirsty good-for-nothings to join me when the game releases in February next year, so until then I, and you, just need to dream the pirate dream. Literally. At least until you can then live those dreams out digitally.

Read more about Sea of Thieves on the game page - we've got the latest news, screenshots, videos, and more!
Tweet