As Hearthstone heads into the Year of the Phoenix, it’s introducing the first new class since the game launched. The game-changing Demon Hunter.
Inside Hearthstone’s New Game Changing Demon Hunter Class
Does Quantum Break Represent a Quantum Leap in Gaming?
Post by Steve Farrelly @ 05:10pm 14/03/16 | Comments
We got hands-on with a near-finished build of Remedy's Quantum Break, and also managed to check out of the episodes of the game's TV show companion. Read on for our full thoughts...


What came first: the chicken, or the egg? An age-old question that finds itself applicable in many a scenario. In this instance, when applied to Remedy’s Quantum Break, it pertains to the disparate parts of their product -- what came first: the game, or the show?

If the above question is foreign to you, Quantum Break, from the studio that brought us both Max Payne and Alan Wake (is obviously the studio’s first game without the main protagonist’s name in its title), is a continuation of their goal to combine passive and interactive entertainment in unique and interesting ways. It’s both a single-player action-adventure game and a live-action TV show. In the game proper, you play as Jack Joyce, a hapless friend trying to do the right thing by Mayor Carcetti/Little Finger, or as he’s known in Quantum Break: Paul Serene (played by Aidan Gillen). 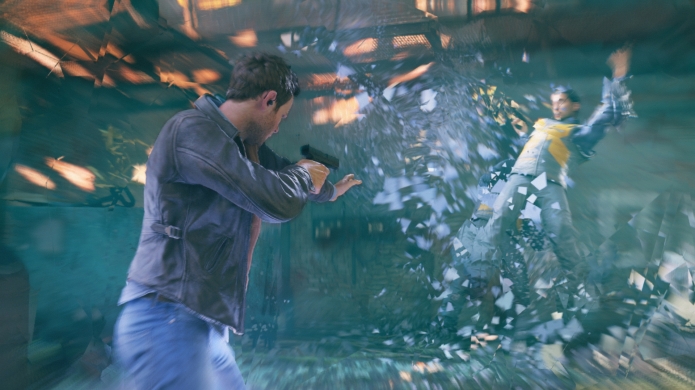 Serene and his company, Monarch Solutions, are on the verge of the biggest breakthrough humanity will ever know -- time-travel. Jack is by no means a scientist, but his unglued brother, Will, is. Serene, an old friend of Jack’s asks our soon-to-be hero to come back to his home town of Riverport where Monarch is located to help him deal with his brother, but also wittingly pulls him into the first throw of the switch of their time-traveling test, which initially is successful. But as with all good sci-fi, everything eventually goes FUBAR and, at the end of it, Serene vanishes while hordes of Monarch goons come to apprehend Jack and his brother Will. Oh, and Jack now has powers -- powers powered by time itself.

Like Alan Wake, the game is broken up into episodes, and at the end of gameplay you can also opt in to watch episodes of a live-action spin on the events you just played through. There are four episodes of the show, each at roughly 20-minutes in length. How you play the game, however, can have an impact on exactly what version of specific episodes you watch. It’s not completely dynamic, because that would be crazy, and impossible, but having legitimate feedback in a TV show from your in-game actions and decisions is a powerful tool. The game is described as the hero piece, while the show is shot from the perspective of the story’s villains, which makes those feedback moments even more impactful. Honestly, in both the TV and videogame landscapes, nothing like Quantum Break exists. 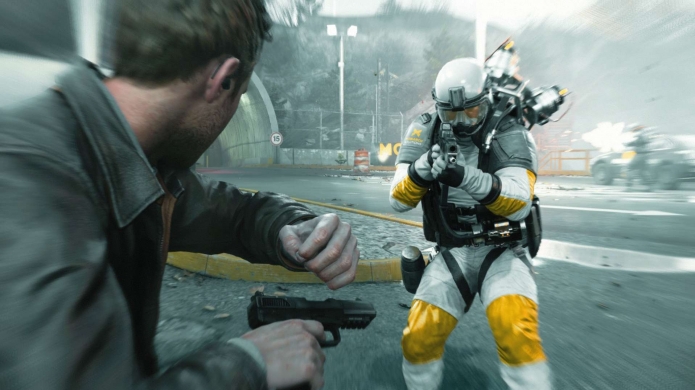 Story is always the hero in most Remedy games, and it’s front and centre here. However, what the studio has done with its sci-fi pillar is subtly wonderful. Jack gains a handful of abilities centred around manipulating time. Interestingly, each one could be described as basic gameplay systems from other action games, but their context and combinations in Quantum Break are almost a stroke of genius, bolstered by the idea that Jack isn’t afraid of having them and, instead, thoroughly embraces them.

He can target an area (or person) and slow time around them, allowing you to impact the aggression of an enemy while firing at him in real-time outside of the affected area. When time resumes, you’ll often just see a bullet-riddled body being thrust out of the area in an awesome display of power. He can also skip through space-time to ‘dodge’ enemies and enemy fire. Applying your finger to the aim button while doing this though, offers you a ‘slow-aim’ type of thing, where you can neatly line-up headshots for quick finishes. When you combine just those two elements, the game’s dynamic action really shows promise. 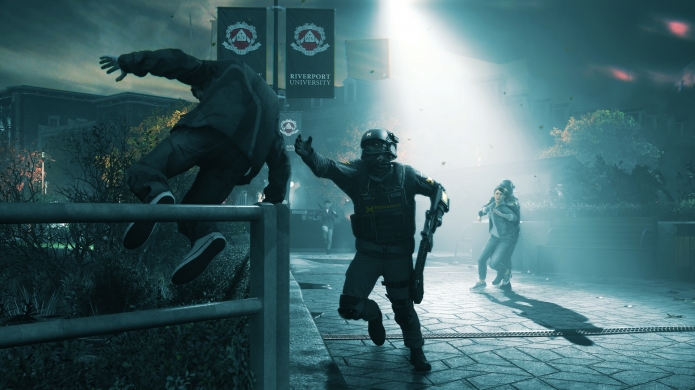 But wait, there’s more. You can also hold down the B button to build a temporary temporal shield, while holding down Y -- even out of combat -- reveals enemies (as if you’re looking through time or, in videogame trope world, walls), but also special events in the environment that allow you to ‘see’ what just happened. It’s more or less a tracking device crafted to help you know what to do next while also expanding the story of the world when Joyce isn’t in that space.

Combat is definitely one of the very rewarding parts of the game, so far, but in keeping with the fact that at least a portion of this product is a videogame, Remedy has ensured there’s plenty to find and look for, from a collectibles sense, which not only helps flesh out this game-world, but certain in-game discoveries and interactions also have an effect on the show. “Quantum Ripples”, for example, are interactive parts of the real-time space that, when interacted with, show up in the show. In the example I saw, Jack’s brother, Will, Good Will Hunting’s a mathematical formula on a whiteboard (while you’re trying desperately to escape, mind), which is then added in peripheral dialogue to the show. It doesn’t appear to have a dynamic outcome, but its inclusion is still cool, nonetheless. 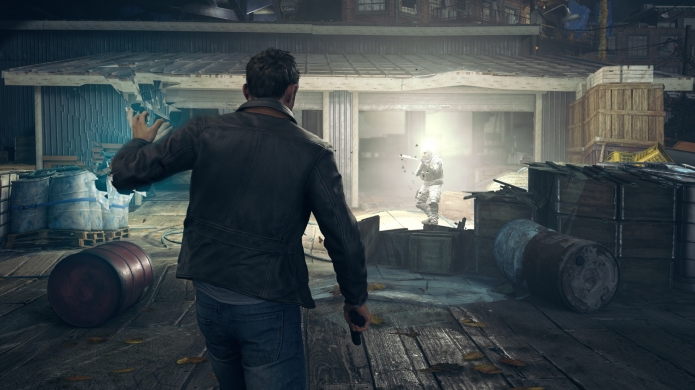 However, there are bigger changes that do have an impact on the show. Characters have binary options with two paths presented before them -- in essence they can see into the future and understand the outcome of a single decision laid before them. In the instance I played with, it was with Serene, but we should also assume this type of thing will also happen to Joyce, given they seemingly have similar powers. Essentially the options before you appear to be centred around how each ‘side’ (read: good and evil) is perceived in the greater world, which will later affect support and options as your progress. Ideally, I’m hoping there’s no one more perfect decision to make, with either option carrying equal pros and cons, but that will remain to be seen.

There’s a maturity that is stacked within this product though, which is offset by the goofiness of a studio who does like to poke fun at themselves and use one of their head-honchos: Sam Lake, in every conceivably crazy way (I found an ‘X-Files’-like show on a TV with him in it that was more like a film student’s art project than anything else, but still made me chuckle). The maturity clearly comes from some definitive history, and has rounded out in what might be an absolute coalescence of storytelling, progression and action. On their own these three ideas might be worth investment as is, but that it’s all presented alongside a high-end live-action TV show is even more compelling. It’ll get a Windows 10 PC release, too. Which we’re promised will be at 60fps and 4K, though at the demo event I attended it was at a shaky 1080p and 30fps, but it’s clear Xbox One has been the priority since day one. 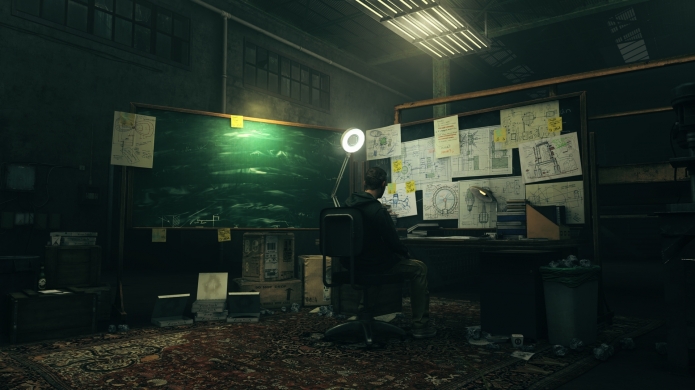 Roughly two-hours with any gaming product is still surface-scratching, but seeing what I played coupled with the finely presented TV show gave me room for optimism beyond the solid, fun combat, and intriguing storyline. That maturity I mentioned earlier, is present throughout. And if you start to consider the logistics of shooting a show in a location, with progressive characters that also need to be represented 1:1 in the interactive space, you can understand reasons for both the delay, but also the studio and Microsoft’s enthusiasm for what they have for punters here.

I honestly just can’t wait for “Next Time, on Quantum Break…”

Read more about Quantum Break on the game page - we've got the latest news, screenshots, videos, and more!
Tweet