Where the BenQ EW3280U immediately impresses is with its colour accuracy and vibrance, making it perfect for firing up 4K content.
BenQ EW3280U 32" 4K HDR Display Review
Down with the Sickness - Feedback and Thoughts from The Division Beta
Post by KostaAndreadis @ 03:26pm 02/02/16 | Comments
The Division just had its first beta weekend, and we were there to play and share our thoughts. Does it live up to the hype? Or is it too early to tell? Spoiler alert, it's a bit of both.


If you didn’t get the chance to get some The Division beta action in over the weekend, be it due to not having a key, being busy with other things, or not realising it was a thing that was happening, here’s the good news. The Division is shaping up to be something pretty special. Or, at least it could be. The only real downside to the beta was that at times it felt more like a demo, with a number of key elements and parts of the game not included. Getting to see everything, in this limited form, took only a few hours or so, with plenty of time spent marvelling at the level of detail in things like garbage piling up in the streets and cars seemingly abandoned, covered in snow.

There was only one main mission to complete, no access to traits or perks, and character customisation was limited to a few basic looks. And a few beanies to collect. But even so The Division still looks like it could more than live up to the hype when the full-game launches in March. With the hype in question being the game’s impressive debut at E3 2013. Back then we were all like, “What’s this, an online co-op shooter thing set in the modern virus-ravaged streets of Ney York City? Looks amazing.” And then we barely heard anything about it for a number of months.


The early 2010s were peppered with amazing Ubisoft first-looks.

So yeah, apart from that impressive debut a few years ago, The Division has kind of had an almost rollercoaster-like relationship with those waiting patiently for the game. The visuals changed drastically when it resurfaced in the last couple of years, and apparently so did the majority of the development team. The beta does a lot to alleviate any concerns you may have with The Division. For one thing it looks amazing no matter what platform you play it on, and the world has a level of detail that is commendable to say the least. The different weather effects are a technical marvel, from snow storms to quiet, bright, sun-drenched, city streets.

As for the question of what exactly The Division is, the beta answers. It’s a co-operative cover based shooter. It’s an RPG. It’s an open-world title much like what we’ve seen before from Ubisoft. There’s also a pretty cool competitive element in the form of an area called the Dark Zone. But it also feels like its own thing. In fact, the best thing about The Division that we can glean from this early look is how confident it is in its own skin. From the way just about every UI feature is stylishly integrated into the game-world, how the map and GPS system feels less like a game mechanic and more like a real-world thing, to the way the streets and alleys of Manhattan feel lived both lived in, and ominously quiet, The Division is one of the most immersive online-RPG-shooter hybrids we’ve ever seen. 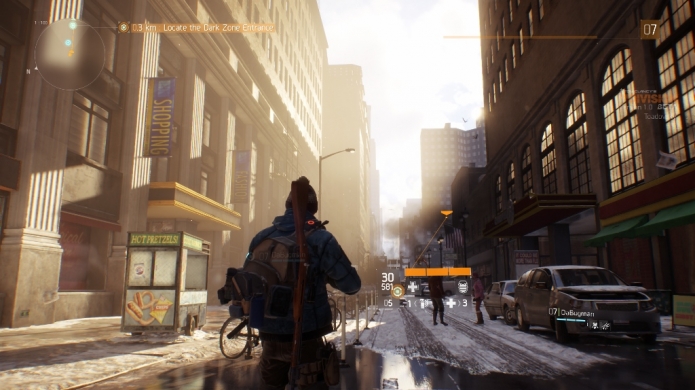 No doubt, the game is certainly a looker

Not that there’s a lot to directly compare it to. Being the sum of a varying number of parts and all. The shooty stuff, and running from cover to cover in a small team, certainly has an air of Gears of War about it. Moving from cover and trying to get out of the way of a grenade can feel a little clunky at first, but once you get a hang of things the action is fluid. Nowhere near perfect but solid none the less. Where the combat differs is in the almost action-RPG approach to enemies, where you get melee guys, grenadiers, snipers, grunts, and elites. And even though those descriptions sound very shooter-ish, the action-RPG approach kicks in when the damage numbers and critical numbers start flying off of enemies like you were playing a real-world Diablo.
The fact that The Division doesn’t shy away from its RPG elements is a plus, from things like detailed character stats, different colour-tiered weapons and equip-able items, to XP gains and an overall quest-style system of missions. It’s a familiar template but the just about genius of what The Division does so well is carefully integrating each of these elements into the real-world setting. Need medkits? Raid the nearest chemist. Looking for tools and materials for crafting? Take a peek in a garage or another lifelike setting. It’s a strange feeling to see these sort of mechanics in the guise of a cutting edge and visually impressive shooter, but The Division is just as much a game for RPG fans as it is co-operative or competitive shooters.

Another element that the real-world setting adds an additional layer of brilliance to is the player-versus-player setting of the Dark Zone. Like everything else in the game, there aren’t any menus or load screens to get into this part of the city, simply find an entrance and then walk in. From there you (either alone or in a group) will come across AI foes as well as other players. Whether or not you decide to engage in combat is left entirely up to you to decide. Now this may sound gimmicky, and with the option to take other people’s loot to claim as your own kind of makes the Dark Zone sound like one big death-match arena, the opposite is true. Your first encounter will most likely be friendly, and with the real-world setting bumping into strangers, passing off information, and then forming simple pacts or truces, carries with it an air of importance. The Dark Zone is dangerous, it looks and feels like a warzone, so trust is important. And that moment you do get ambushed by another player, you’ll learn an important lesson. 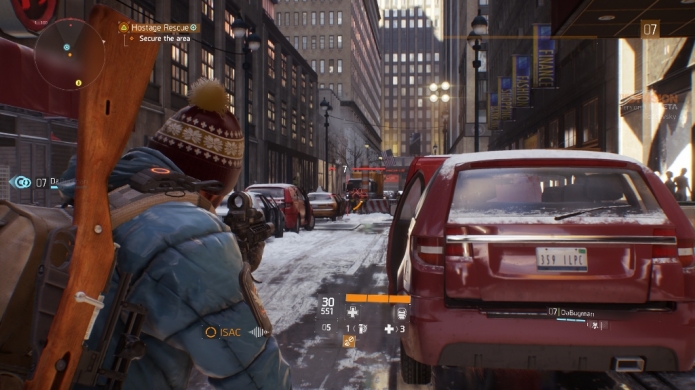 Okay so you probably get the picture. The Division could very well be all that we wanted to be and more. Now, that may sound like gushing preview-speak but it comes from the fact that there’s really not a lot to do in the beta. There’s no crafting, side missions are limited to a few skirmishes, upgrading your base is non-existent, whole swaths of the map are blocked from access, and player customisation is limited to a few basic skills. But what’s left is certainly impressive. To the point where your imagination will run wild creating a version of The Division in your head that would be an amazing game. Imagine running into an NPC faction in some alley, then gaining access to their hideout and being able to run missions for them. Imagine the same thing but being able to side with warring street gangs.

Above all else, with The Division beta we can see the foundation of a truly fantastic RPG-shooter hybrid. One with an immersive real-world setting. And one with almost limitless potential.

The Division is out March 8 for Xbox One, PS4, and PC