With the recent release of Fallout 76: Wastelanders, we sat down with Bethesda Game Studios to discuss its development, the original launch, and the road ahead.
Fallout 76 - The Big Interview
A Scale of a Time - An In-Depth Look at Platinum's Xbox One Exclusive Scalebound, with Quotes from Designer Hideki Kamiya
Post by Steve Farrelly @ 05:56pm 10/08/15 | Comments
We take a look at Platinum Games' Xbox One exclusive Scalebound and chat with game director Hideki Kamiya. Read on for more...


Platinum Games’ ability to break the rules exists within every product they’ve ever crafted, which is either a perfect analogy for the state of game development in Japan, or a coincidental outcome of a studio utterly defiant in “the old ways” and completely in-tune with what they think ticks.

Here’s some quick history: Platinum was effectively borne of Clover Studios -- a somewhat separate, but still in-house studio at Capcom that started working as part of the infamous “GameCube Five”. Nintendo’s little purple cube was struggling globally to keep up with the PS2 and Microsoft’s then-fledgling Xbox and after its GameCube foray, through Clover we were treated to instant classics like Viewtiful Joe and Okami on the PS2 also. 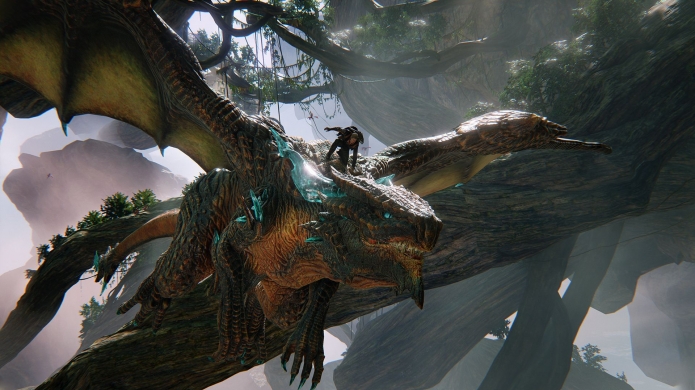 For whatever reason, however, Clover was closed (while Capcom maintained the rights to the aforementioned IPs), and Atsushi Inaba, Resident Evil creator Shinji Mikami and Hideki Kamiya formed Platinum Games, who went on to create Bayonetta, MadWorld and Vanquish -- to name a few. Mikami would obviously depart Platinum to form Tango Gameworks who recently released The Evil Within and are now wholly owned by Bethesda, while Platinum continues to expand its portfolio and partners, with Bayonetta 2 being a Nintendo Wii U exclusive, while a handful of other titles are published through a deal with SEGA. And, most recently, new IP Scalebound has come about from a direct partnership with Microsoft Game Studios. The lads, get around.

The latter game, being helmed by Kamiya sees a modern, young human male transported to a mysterious land called Draconis and, for unknown reasons, shares a “life-source” with a dragon, which has also transformed parts of his body with dragon-like skin and even claws on his right hand and arm. This commonly shared source is one of the game’s pillars, we’re told by Kamiya through his translator, and we’re also warned we’re going to hear the word “bond” a lot during our presentation and in answers to most of our questions.

“[The bond isn’t] just a storytelling [or] narrative tool, it’s also used in combat and gameplay strategy and choices,” explains the translated Kamiya when we ask about the size of the game and its story. “But there is a foundation for story that you end up following, but it’s not the only thing we’re forcing the player to do -- there’s more exploration, and interesting paths you can take to feel like it’s a large adventure. So it won’t just be a linear progression that you expect in action games.”

Platinum has certainly dabbled in the RPG world, but it could be argued that Scalebound is their most expansive move into it yet. Action abounds plentiful in the gameplay demo we see, with both the player-character Drew and his dragon sidekick taking on waves of humanoid soldiers, large grunt bugs and an even larger Mantis-like mini-boss. In this sense, action is a large part of the game, but it comes with a handful of differentiators. For example, Thuban, the dragon, can be commanded but not controlled. He’s obviously a very powerful AI companion, and there’s effectively no cooldown to his usage, however, he does have his limits. Moreover, having him squash your enemies for you will take away your opportunity to gather gems which are left after Drew vanquishes any baddies, himself. Gems are used as a sort of in-game currency to both upgrade Thuban and buy new equipment. 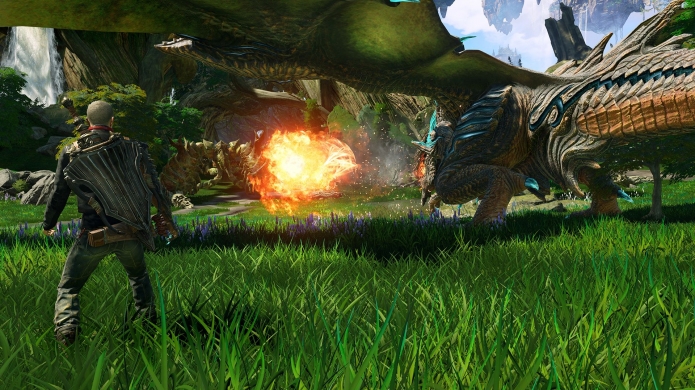 There’s a balance to strike with this, which should involve equal measures of challenge versus greed, and nurture versus power.

“So there really is no limit; there’s no restriction on how many times [you use Thuban] or you give the order to attack, but if you think about it naturally he is a living creature himself so if he’s too aggressive then it means at some point he’s going to wear down or if he gets too close for being too aggressive, he can gain more damage against himself,” Kamiya explains of Thuban’s commands and usage. “So it’s really about finding that right balance of ‘okay, I want to use Thuban this much, but have him come back a bit’ so you can have that right balance and so you can go for the final attack.

“In terms of customisation, the main character is really the dragon,” Kamiya continues. “Drew will have different weapon varieties and maybe shields, but in terms of your investment as far as customisation goes, that’s going to be Thuban. So whether it’s the armour or the dragon skin, that’s going to be Thuban and it goes back to the gems [and] the more gems you collect. So it’s really up to you how you want to use them [in customising the dragon].”

It’s an interesting spin on the usual player-character investment model, and at least offers something different to the Skyrims, Witchers or more of the gaming world where action and RPG combine. How deep the customisation goes was left somewhat ambiguous, but a lot of it appeared to be cosmetic (obviously there’s tactical upgrade components as well, but this wasn’t fully decorated), however, we were assured all “purchases” of dragon upgrades were not micro-transactions, rather just how you use your in-game gem currency.

“And to add to that, Drew is a very important character to me,“ Kamiya interjects. “And to the story. He’s been transported from our Earth; our modern world into this… to him, this unrecognisable world of Draconis. So in order to stay true to who Drew is, from our world, he needs to be properly represented and we need to keep true to his character, so in that sense I feel the customisation needs to go into the dragon.” 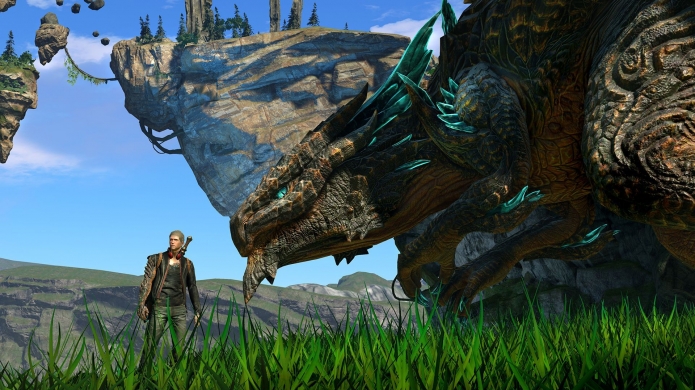 This could definitely create a disconnect, however, as Drew appears to be a brash, hot-headed type of character who sports headphones and listens to Earthican music while riding on a dragon and slaying giant bugs. Also, where does he get battery power from to keep his music-playing device running? But I digress.

Kamiya uses his headphones as a means to relate the character to us -- the player, but it looks and feels at odds with the gorgeous landscapes and vistas the art team has designed. Still, with your customisation investment squarely placed in Thuban, Drew could very well be set aside the further you progress into the game. Certainly his size and the size of the world suggests Thuban’s the real hero of Draconis, and Drew’s rather small stature is at complete visual odds with the game-world. It’s alien in this way, which is a good thing when you’re also playing the alien in a foreign land, and could either purposefully create a unique feeling when playing through, or it could simply be a fantastic byproduct of how the team has gone about creating this world. But I’m getting ahead of myself here.

What comes to the fore is a game designed to whisk players away into a fantastical setting full of danger and exploration; with villages to discover, items to collect and a dragon to nurture. In this modern dragon-loving world of ours (*cough* Targaryens forever *cough*), with fantasy at its absolute highest level of success and mainstream adoption, the colourful and gorgeous Scalebound is shaping up to be a unique and engaging spin on the formula. Action, role-playing, dragons, discovery and a development heritage, to die for, leaves us very hopeful for this Xbox One exclusive in 2016.

Read more about Scalebound on the game page - we've got the latest news, screenshots, videos, and more!
Tweet