An OC beast that runs cool, silent, and also happens to be built like Rolls Royce.
MSI GeForce RTX 3080 Gaming X Trio Review
Throwback Thursday - Star Wars Episode I: Racer (1999)
Post by KostaAndreadis @ 04:22pm 23/04/15 | Comments
Throwback Thursday is a weekly column here on Ausgamers where Kosta opens up the proverbial gaming industry attic, has a poke around, finds dusty copies of games from a different time – and plays them!


Watch Kosta go from simple slave, to pod race champion, to Lord of the Sith

The Game: Star Wars Episode I: Racer
The Year: 1999
The Developer: LucasArts
The System: Nintendo 64/PC/Dreamcast

Pop quiz hot shot. What’s the highest selling sci-fi racing game of all time? Not sure? Can’t decide between one of the F-Zero games and the original Wipeout for the Sony PlayStation? Well, you’re wrong on both counts. The correct answer is Star Wars Episode I: Racer, the game which took the best sequence from the entire Prequel Trilogy and turned it into an interplanetary racing game.

It's a New Sales Record!

Okay, so maybe the fact that this week’s entry being on Episode I: Racer kind of ruined the whole mystery, but still -- it sold more copies than F-Zero and Wipeout!? Yep, and as a pre-school Darth Vader would say when piloting a machine that clearly wasn’t a ‘pod’, “Now this is pod racing!” Also, “Momuwaga! Chesku Sebulba dingu waga midu!” which roughly translates to “Mommy! Sebulba was mean to me today!”

Ahem, so perhaps the biggest factor that played into the immediate and resounding success of Episode I: Racer was that it was released on PC and the Nintendo 64 before The Phantom Menace hit theatres. Which strange as it may seem, was a time when Star Wars could do no wrong.

Before May the whatever 1999, Star Wars was pretty much infallible. And for those of you that were alive at the time, and sentient to a moderate degree, you’d recall a sense of hype surrounding the release of Episode I that was beyond huge. Hype so big that if it were a booty, Sir Mix-a-Lot would have written a catchy rap song about it. People were so taken aback by the mere fact that a new Star Wars movie was being released that fully grown men failed to question why they were buying posters, figurines, and pyjamas displaying the iconography of Jar Jar Binks. A character who was mere weeks away from being crowned Worst Gungan Ever and relegated to the bargain bins of stores like Toys R’ Us, Toy World, and Ye Old Sex Shoppe. 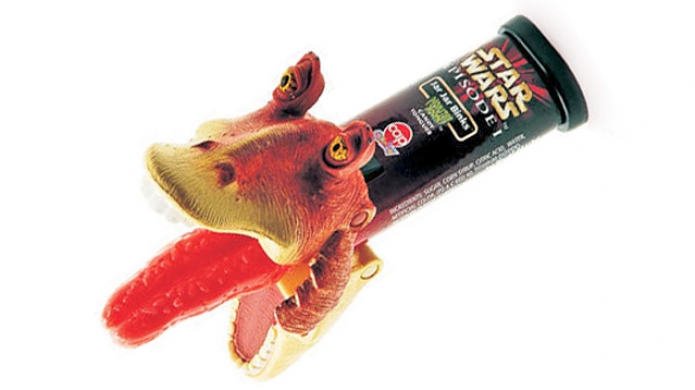 "Coming up after the break on 'Candy or Sex Toy?'"

So before the eventual cinematic let-down that is Episode I, Star Wars fans everywhere were understandably excited about the prospect of Pod Racing. Featured prominently across material leading up to the movie’s release, Pod Racing was an understandably exciting new addition to the Star Wars universe. One that turned out to be the Star Wars equivalent of the Bathurst 1000, but with fewer wheels and only a couple more weird looking alien creatures making up the crowd. By focussing on this one aspect of the film, the prospect of playing Episode I: Racer quickly positioned the game as a must play for millions of Star Wars fans.

Now, it’s worth mentioning that even though Episode I: Racer was one of two videogames based on The Phantom Menace, it was the only one that seemed to match the visceral nature of the trailers. Plus, it was the only one developed in-house at LucasArts. By 1999, LucasArts had already begun its transition into becoming a studio that worked on nothing but Star Wars related products. But, from its beginnings as a critically acclaimed development studio that created a string of original and instantly memorable games, this goodwill was still a year or two away from fading away.

So a fast-paced sci-fi racing game from LucasArts, set in the Star Wars universe, sounded like a premise worth getting excited about. It’s only now that the Episode I subtitle does more damage than the preceding two words do good. 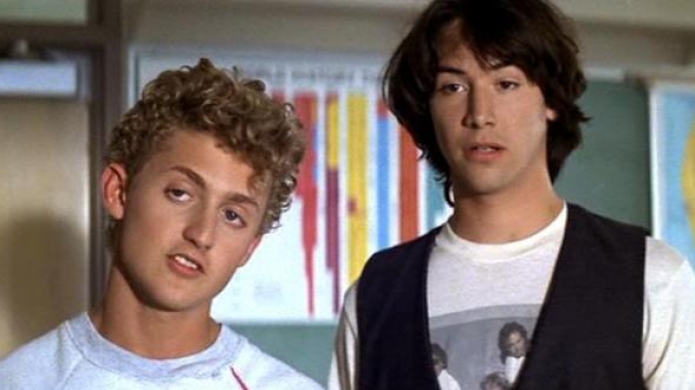 So how does it stack up today? Well, playing Episode I: Racer on the Nintendo 64 and the game immediately begins to shows its age. From muddy textures to a general lack of detail, and cartridge limitations that resulted in a music soundtrack that looped low quality recordings from the film series to an annoying degree, you get the sense that you’re playing something a little rough around the edges. Things improve quite considerably, visually speaking, when playing the PC and Dreamcast versions, but the roughness is still there. No doubt the by-product of a game that had to hit a specific street date.

When it comes to racing games, and especially for those of the super-fast futuristic kind, the quality of the experience usually derives from the responsiveness of the controls. And not from fancy visuals or creative vehicle design. Which, is basically a convoluted way of asking “Do the pod-thingies move good?” For Episode I: Racer the answer is a definite yes, as even though the interface and menus make it look like a straightforward rushed-to-market licensed product, underneath all that lies a robust and deep racing engine. And one that offers a lot of variety for a game where you’re moving along at 650km/hr. Which in parsecs, would equate to a decent enough Kessel run. Not quite Millennium Falcon good, but decent enough for a Space Commodore HSV. 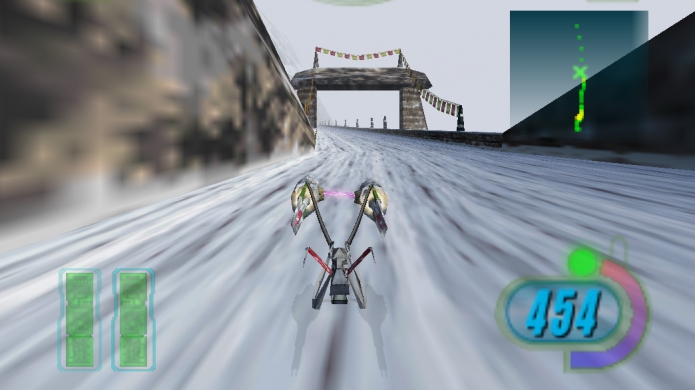 "Quick Ani, get inside. There's an ice storm brewin'."

It’s a shame then that the first set of races showcasing most of the planets are ridiculously easy, to the point where the first hour of the game basically becomes an overly-long tutorial. Which means that less than one second into each of the amateur league races you’ll be in first place, no matter which racer you choose, and will remain in total isolation until the end of each race. So the fact that each racer has drastically different stats ranging from acceleration, to top speed, to cooling and even repair capabilities, these won’t factor into the equation until you start losing some races. And thankfully, the game becomes somewhat challenging when racing in tournaments and the higher difficulties. So this means using the credits you receive for placing in each race to upgrade different pods and even experimenting with different pilots and machines.

With races taking place on a number of different planets, which all seem to be made up entirely for this game, the visuals and track design is commendable. From multiple paths, shortcuts, alternate routes, and racing on ice and liquid, Episode I: Racer never gets boring. Even when individual races can take upwards of ten minutes to complete. The only thing that would have made the overall game a classic would have been more competitive AI, and perhaps a few more familiar locations. Because outside of Tatooine, no one is going to get excited about racing on Ord Ibanna or Baroonda. 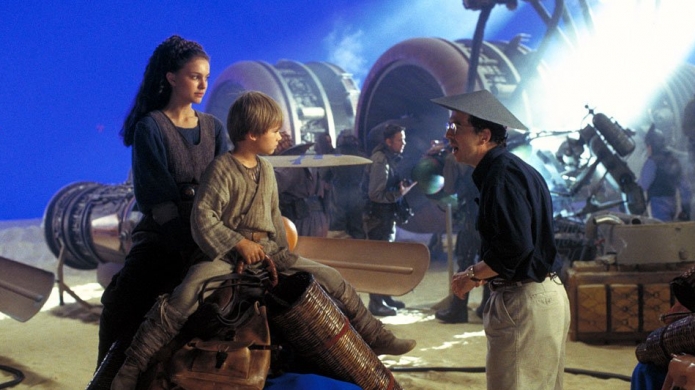 Kosta Andreadis remembers a time when in order to get the best out of a console game you had to blow gently into it and whisper sweet nothings like "please work, I’m up to World 8-3, for fudgcicles sake". Situated in Melbourne, Kosta is a freelancer who enjoys playing RPGs, strategy, adventure, and action games. Apart from investing well over 200 hours into The Elder Scrolls V: Skyrim he’s also an electronic musician with an album recently released.

Read more about Throwback Thursday on the game page - we've got the latest news, screenshots, videos, and more!
Tweet