We take The Callisto Protocol through its review paces. Does it stack up to the legacy of Dead Space?
The Callisto Protocol Review - Beware the Biophage...
Throwback Thursday - Blood (1997)
Post by KostaAndreadis @ 04:46pm 26/02/15 | Comments
Throwback Thursday is a weekly column on AusGamers where the nostalgic Kosta Andreadis opens up the proverbial gaming industry attic, has a poke around, finds dusty copies of games from a different time – and plays them!

The Game: Blood
The Year: 1997
The Developer: Monolith Productions/GT Interactive
The System: PC

When Doom came out in 1993, it was nothing short of a phenomenon. The first-person perspective, 3D environments, and focus on a very specific form of interactive violence wowed players the world over. In many ways it was the beginning of an industry trend towards more action-centric titles, and helped propel the first-person shooter into becoming one of the industry’s leading genres. So after the release of Doom and its sequel the following year, it’s no wonder that the many titles that followed in its footsteps were not only considered, but constantly referred to as, Doom-clones.

Although the term Doom-clone may not sound all that promising, the core reasoning behind using it as a descriptor is definitely fitting. At its core a Doom-clone is a first-person shooter made utilising a mixture of 2D sprites and 3D environments, simulating the experience of walking around a believable 3D world. With lots of shooting at stuff. Although that’s not all that detailed a summary, what truly makes a Doom-clone a Doom-clone is the additional focus on outlandish and fantastically violent weaponry mixed with a level structure comparable to a maze. And, with goals centred on finding the right key to open the right door. 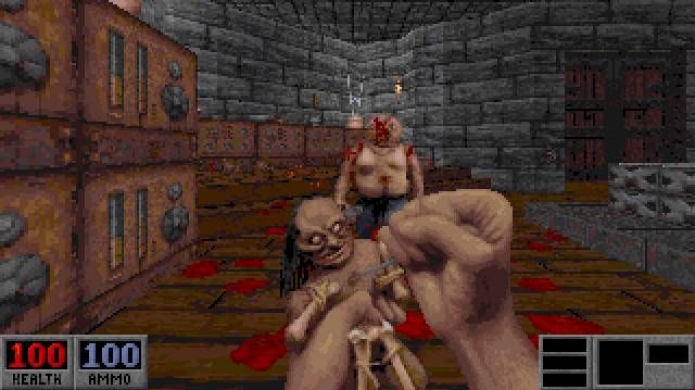 This is one of the key differences between a shooter from the ‘90s and one made today, no pun intended. A shooter released today is more likely to be a Call of Duty-clone than a Doom-clone simply because it probably would focus on realistic military-grade weaponry and a linear checkpoint-driven level structure. So even though the genre’s roots lie with titles like Doom, the shooters today are a far cry from the ones that hit the market in the ‘90s. The outlandish weapons are all but gone, and the violence has shifted towards a more realistic tone. A tone that surprisingly is a lot more intense than the over the top gore and violence that became the calling card for the genre in the ‘90s.

Which naturally brings us to Blood. Released in 1997, Blood from Monolith Productions is very much a Doom-clone. An overly violent, sadistically fun shooter where the focus is squarely on action, set across a number of levels where the goals are based around finding different keys and exits. Built utilising 3D Realms’ Build Engine, the platform that helped make Duke Nukem a household name, Blood was one of the higher profile Doom-clones of the ‘90s. A lot of that probably had to do with the name and setting, which fittingly brought a lot of media attention to the game thanks to a number of weapons that could turn enemies into screaming fireballs before they exploded in a firework display of blood and bone. Like the flare gun, napalm launcher, and aerosol can and lighter combo. 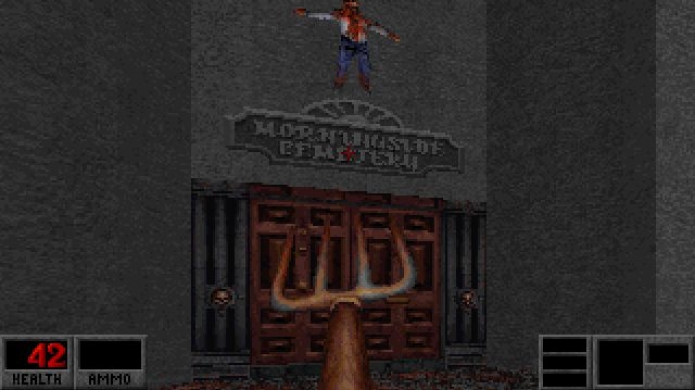 But even so Blood was a technically impressive game for its time, and the Build Engine was a marked improvement over the technology that made the first Doom possible. It added advanced height components to the 3D first-person shooter, allowing for simple things like different rooms with different ceiling heights to become part of the norm. Pretty standard stuff sure, but it’s one of the reasons why Duke Nukem 3D kind of broke free of being directly linked and compared to Doom, and is generally thought of as a separate milestone. But even so, Blood is a Doom-clone through and through. A style of game where one can quite confidently say, they don’t make them like they used to.

So how does it stack up today? Well first up it does support a version of mouse-look, so getting a feel for the game isn’t really a problem. The first signs of ‘oh, this is a pretty old game’ come when you start facing off against enemies with projectile weaponry, which in 1997-design down to ‘if they shoot, it’s going to hit you’. This makes playing Blood, even on the easiest setting, pretty tough. Here the difficulty slider is old-school to a fault, the higher you go only really affects the damage enemies do and the hits they can take. Either way, their god-like pinpoint accuracy is never taken into consideration. And this probably plays a lot into the pacing of old-school shooter like Blood, where exploring a level means running around and shooting enemies as fast as you can. 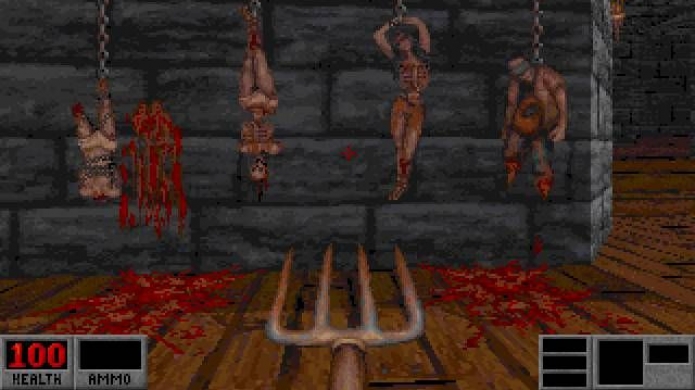 But for many, difficulty in a Doom-clone is a moot point. And really, this the only type of game where you can play through the entire thing with both god-mode and all-weapons-and-ammo cheat codes activated and not feel all that guilty. Blood definitely falls into this category, as the majority of the fun comes from playing around with the all the different weapons, of which Blood has many. The most memorable being the Voodoo Doll, which never gets old. Blood is also one of the first games to introduce an alternate fire mode for each weapon, which naturally amps up the variation.

For such a fun game the actual look and feel of the setting, which comes across as satanic by the way of insane asylum at the turn of the 20th century, can at times be a little off-putting. As can the copious amounts of blood spilled. In stark contrast to this borderline sinister setting the game sees fit to throw in quite a few movie references, including an opening line ripped straight from Army of Darkness (the comedic third Evil Dead movie), making the game quite funny at times. Maybe funny is the wrong word to use but even at its worst Blood comes across as a gore-filled b-movie, one where it strangely feels lighter and less serious the more blood is spilled. Like getting to blow up unarmed mimes.

They don’t make clone them like they used to.