A slice of life full of meaning, and an Aussie made gem to boot
Wayward Strand Review
Throwback Thursday – The Simpsons: Bart vs. the Space Mutants (1991)
Post by Eorl @ 02:58pm 18/12/14 | Comments
Throwback Thursday is a new weekly column here on Ausgamers where Kosta Andreadis opens up the proverbial gaming industry attic, has a poke around, and amongst the photos of game developers posing in front of exotic cars, finds dusty copies of games from a different time – and plays them!


The Game: The Simpsons: Bart vs. the Space Mutants
The Year: 1991
The Developer/Publisher: Imagineering/Acclaim
The System: Nintendo Entertainment System (NES)

Even before The Simpsons went on the air for the first time in Australia (on February 10, 1991) it was a big deal. Merchandising had hit stores and the characters were already positioned as surrogates for the standard family unit of a mother, father, and two point something children. It’s hard to picture this version of The Simpsons because this was before the show became better known for being one of the sharpest, funniest, and most poignant sitcoms in television history. 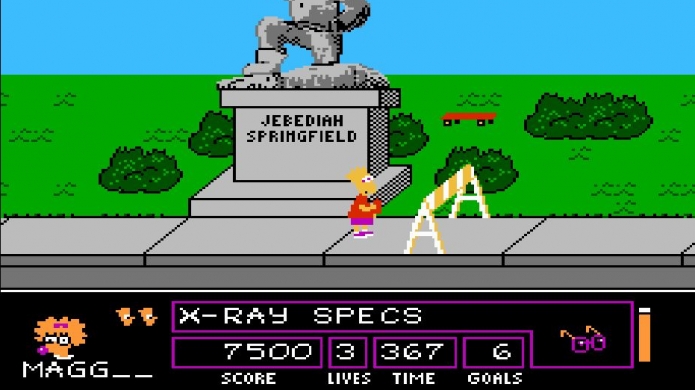 And long before it became the longest running animated show of all time and, let’s face it, grow a little stale. In 1991 people weren’t sure what to make of it. Was it a fad? Just a passing craze? With the amount of Simpson-brand products hitting the market, one could have easily thought along those lines. According to all the t-shirts, mugs, underwear, dolls, and countless other objects being sold during the holiday season of 1990 the narrative was clear. If you were a father you were lazy, loved beer, and were just like Homer. If you were a mother you were caring, the homemaker, and a bit of a prude like Marge.

For young boys though they all looked up to Bart Simpson, the perennial underachiever. And one who was proud of it. Man. And as video games were seen as the domain of young boys everywhere, this meant that the very first Simpsons game for a home console would focus on the 10-year old troublemaker.

The first Simpsons video game arrived on home console whilst the show was airing its second season in the US, on the NES, and was titled The Simpsons: Bart vs. the Space Mutants. It’s important to note the timing for a couple of reasons. Think of your favourite Simpsons episode. Got one? Good. Well chances are it was still a few years away from airing for the first time. Same goes for your favourite character moment or situation. Also, the actual animation and art style we all picture when we think of The Simpsons? That took a few seasons to perfect too. So Bart vs. the Space Mutants is early Simpsons in every regard, especially in its references.

Story-wise it’s a little ridiculous, only tenuously linked to the show, and falls under the same umbrella that many other licensed Acclaim titles from the era do. That is, any excuse to have players running around in a side-scrolling game, jumping and hitting stuff. In Bart vs. the Space Mutants the premise is simple enough, Space Mutants from the movie series within the show have begun plans to take over the world and it’s up to Bart to stop them. Again this being early Simpsons the more recognisable alien characters of Kang and Kodos weren’t fully developed, so they’re not involved. As to why Bart is the only one who can stop them? Well, he overheard their plan and no-one would believe him even if he told them. Because he’s a troublemaker. Plus, the Space Mutants are disguised as humans and only Bart can see their true identity. Through a pair of magical sunglasses. 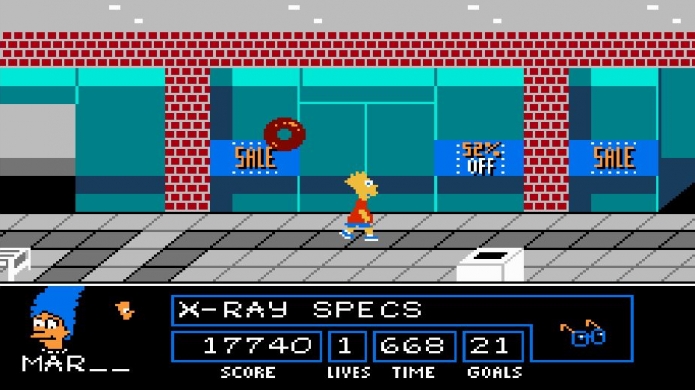 As for the game it’s broken up into five stages, each set in a different location, where the next step or next version of the Space Mutant’s plan of world domination is taking place. The plan itself doesn’t really make sense, which is fine as it’s merely there to service each new area. In the first stage which takes place within the streets of Springfield, the Space Mutants will need anything and everything that’s coloured purple in order to power their mysterious machine. Once thwarted, through the process of spray-painting purple stuff to a different colour, the second stage moves things to the Springfield Mall where the objects required for world domination are hats. So you’ll need to collect hats.

Yeah, not really much of a coherent premise, but it does open the door so some pretty interesting mechanics. Which is, a mixture of puzzle solving and platforming. In the first stage spray paint is used to change things from purple to red. But it extends beyond this simple mechanic as you can buy items like a wrench to open up a hydrant to wash away some wet (and purple) paint, and even use fireworks to scare away purple birds. With players having to collect, change, or alter a certain number of objects before they reach the end of a particular stage it’s a design set up specifically to be replayed over and over until each puzzle and obstacle is overcome.

Is Al there? Last name, Coholic?

So how does it stack up today? Outside of the first stage, not that great. Finicky controls, precision jumping, limited lives, and no continues make this a punishingly difficult game to play for newcomers. If you haven’t played the game before expect to lose at least one life within the first 30 seconds or so of game time. Bart vs. the Space Mutants is one of those super hard to finish NES games that has its own distinct feel and set of rules. Secondly, this version of The Simpsons feels weird. Not many of the landmarks are recognisable, and even when they are they feel kind of old. Case in point, the talking stature of Jebediah Springfield. 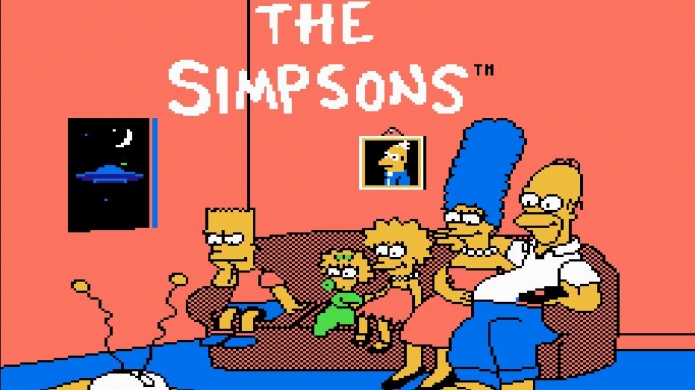 Outside of the well realised first stage the rest of the game feels rushed with far less puzzle solving and way more precision jumping. The Springfield Mall and Krusty-land stages don’t exactly feel like they belong in The Simpsons and work purely as settings and locations for 8-bit gaming. As the game doesn’t have any continues you’ll need to become a master of each stage before you even have a hope of reaching or even getting a glimpse at the next. This is the sort of design you won’t see today, as it’s clearly aimed at prolonging an otherwise fairly short experience. Which is no wonder that first stage feels so realised and memorable, because for many that’s all they’ll really end up seeing.

Bart vs. the Space Mutants is a licensed video game in the worst sense of the term. Something strictly for fans and something that will only become a worthy experience if you’re willing to overlook its shortcomings and spend an inordinate amount of time making small, incremental, and frustrating, progress. It’s not a terrible game by any measure, but it’s not something that has stood the test of time either. Not that it would have, as by the end of 1992 a further 7 video games starring Bart Simpsons were released on home console. And this is generally considered to be one of the good ones.

Kosta Andreadis remembers a time when in order to get the best out of a console game you had to blow gently into it and whisper sweet nothings like "please work, I’m up to World 8-3, for fudgcicles sake". Situated in Melbourne, Kosta is a freelancer who enjoys playing RPGs, strategy, adventure, and action games. Apart from investing well over 200 hours into The Elder Scrolls V: Skyrim he’s also an electronic musician, producing under the name Kbit, with a debut album released in 2014.

Recent articles by Kosta:Find him or follow him on Twitter - @toadovsky, Steam - toadovsky and Xbox Live - Toadovsky.
Read more about Throwback Thursday on the game page - we've got the latest news, screenshots, videos, and more!
Tweet

KostaAndreadis
Posted 01:32pm 19/12/14
Commenting has been locked for this item.
6 Comments
Show