A celebration of the long-running franchise and a great way to kick off Switch gaming in 2023.
Fire Emblem Engage Review - Strategy Gold
The Problem with the Internet is… it’s SPOILING Destiny
Post by Steve Farrelly @ 04:25pm 10/09/14 | Comments
Thought something else might pop up in the headline, didn’t y’all ;) Read on for why we’re anti-Internet where Destiny is concerned…


As you know, we’re in the throes of our Destiny review even as you read this. Bungie didn’t want to create a separate review community for the game, because Destiny is best experienced full. Full of other players, full of all its loot, full of quests, full of narrative arcs and, well, full of you. And by you, I mean, full of yourself -- your personal you. You’re the one the team created this game for, and they made it hoping you would dig through every layered component of their design. They hoped, in that lofty decade-long goal of theirs, that they could create a game where you weren’t rushed to the end goal scenario, and certainly weren’t handheld along the way.

Bungie did this forgetting that the Internet is a thing. It’s a very spoiler-heavy thing, too. So what we have now is countless groups and individuals vying for bragging rights and “I’m the authority” positions, by removing the exploratory fun the game has to offer.

I’m even part of a group where this is a thing. The authors don’t mean it -- they’re passionate individuals who want you to have the same fun as they apparently did, but they’re going about it all wrong. 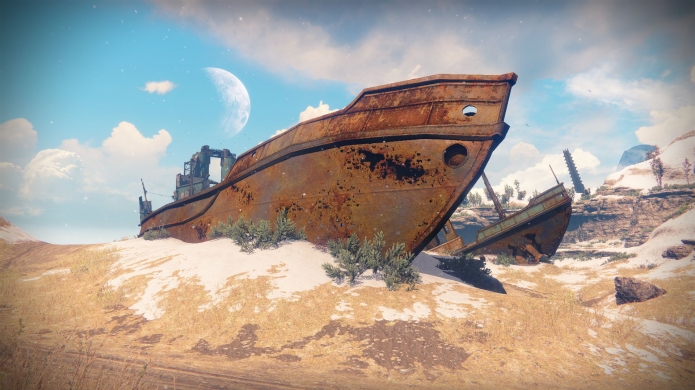 We should consider the experience, this early on in its life a shared exploration of a new world; we’re all Guardians with the same goal in mind. The ubiquitous and clearly evil Darkness needs to be pushed back, and we should all band to together to this. We should ride the frontier as a posse on our sparrows soaking up the experience in interactive form -- what we should not be doing is pressing down on the D-Pad, jumping out of the game and looking up for guides for, well, anything. At least not yet.

I don’t want to know chest and loot locations. I don’t even want to know what subclass I can look forward to once I start striking higher levels. And if anyone spoils the spoils I’ll find on Venus, I might just scream because VENUS. When will I ever actually go there?

It’s endemic in a game like this (Dark Souls suffered the same fate, as do many other games). Especially because it’s such a social bastion for the shooter field -- you don’t require friends to be online, because there’s a good chance you’ll make some out in the [game] world yourself. And in-game, getting a bit of help isn’t just a bad thing, it’s probably the right way to go about it. Unfortunately social media means spoilers are even part of headlines that perhaps didn’t mean to be harmful in the first place. In years gone by, you could just go to GameFAQS or wait for an official guide, but as people transition more permanently to the Twitch TV and YouTube way of gaming, we’re quickly being conditioned to speed-run everything and level up as quickly as possible. And if you can’t remember what the experience was like for you between level five and eight because you were grinding so hard, then Bungie’s intent is lost on you.

Obviously like most things on the Internet, half the point is to not read it if you don’t want shit spoilt for you, but as a person who has been with this game since its official unveiling, and who has been playing for review sake; soak it up. Don’t get algorithmically greedy and just forget the numbers for a while. This thing is going to be around for quite some time, and so you’ll have a chance to explore all it has to offer -- whether it’s from your first dabble in a class, or your third or fourth character roll... just don’t rush what is turning out to be a wonderful exploratory experience.

You’ll be thankful for your own progression in the end, and if you hear anyone else shouting out of frustration for Spinmetal locations, maybe just smile inwardly that if their gusto is intact, they’ll have a fun discovery emergent quest in front of them.

Destiny is not a game to be taken in base strides. It’s not a checkpoint-to-checkpoint linear experience, it’s a game built around your own levels of engagement, and the more you invest in your own time and exploration within it, the more you’re going to get out of it. It was inevitable spoilers and guides would come along, and they do have a place, don’t get me wrong, it’s just that we’re less than a working week into this thing and if the trend continues, there’ll be nothing left to learn or experience for yourself.

Be vigilant, Guardian. You’ll find your own way.

Read more about Destiny on the game page - we've got the latest news, screenshots, videos, and more!
Tweet