NBA 2K21 is the best basketball game around... but it's also the only one.
NBA 2K21 Review
Dragon Age: Inquisition Hands-On Preview – Inquisitive Potential Revealed
Post by Steve Farrelly @ 01:16pm 27/08/14 | Comments
AusGamers was set loose in the world of Dragon Age: Inquisition in hands-on form. Read on for our full thoughts...


It’s no small feat to showcase a piecemeal slice of an open-world action-RPG at an event in a meaningful way. Understandably, concessions must be made, especially when talking about a game that brags 150+ hours for a completionist play-through. Such was the task for EA and BioWare at gamescom 2014 with Dragon Age: Inquisition. They didn’t have to be worried, though, as their game was immensely popular, as evidenced by the constant line outside the door to get in for 30 minutes of hands-on time that didn’t begin to scratch the surface of the promise of what Inquisition has on offer.

For more on that promise and a look at the bigger picture, check out my interview with Producer Cameron Lee; additionally, have a read of Steve and Joab’s respective interviews with Cameron for an in-depth focus on the specifics of Inquisition. As for my time with the game, the first major noticeable facet was how beautifully rendered it all is in Frostbite 3 technology. Frostbite continues to show its diversity across genres, and the high-end demo PCs certainly did a good job of showcasing all of the expected pretty from a fight against the undead in a low-light swamp environment. 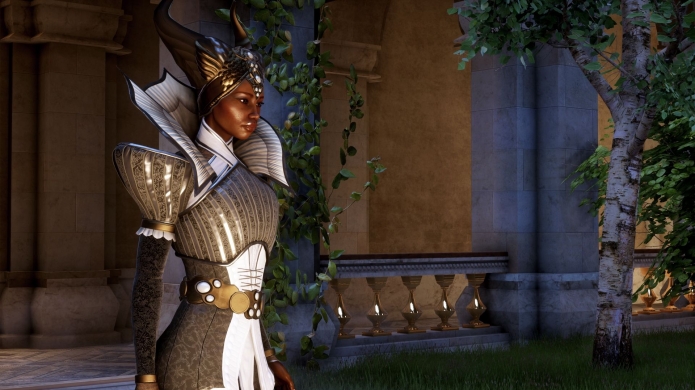 The attention to detail on the character design is fantastic, and goes a long way to encouraging players to mess around with the hundreds of customisation options for determining what could conceivably be a wholly unique avatar. Not that I had time for that, as there were too many undead foes to slash, shoot and wizard-blast my way through. There was no context offered to the demo and it was a bit disorienting at first, despite a familiar return of faux-pen-world Dragon Age II-like funnelling in this particular section, which hopefully doesn’t carry over too much into the final product.

Playing as the titular Inquisitor, kitted out as a melee-focused warrior, taking down lower-level lackeys was a breeze with tight controls (on an Xbox 360 controller) and powerful attacks. Pushing ‘X’ was the main attack button, ‘A’ was used to evade and ‘Y’ and ‘X’ were there for casting spells, with the option of holding the left or right trigger to access additional tiers of magic. Cycling between companions was as simple as tapping down on the D-pad, and my party was decked out with all the fantasy classes you’d come to expect: ranged dude, wizard guy, and tank bloke.

Switching into the tactical mode, which freezes the battlefield and lifts the camera to an isometric view, was only something I dabbled with towards the end of my time as I came up against tougher opponents in greater quantities. While this allowed me to take full control of my party and give them specific orders, they were actually quite apt at taking care of themselves when it came to selecting individual targets, helping each other out and, most importantly, smashing health potions when their health slipped into the red.

There were plenty of opportunities to venture off the beaten path which, in fairness, was something I did more often than not: mainly because I didn’t know where I was supposed to be heading half the time. This paved the way for serendipity, though, in the form of hidden collectables and even a campsite guarded by a particularly nefarious sorceress who wasn’t eager to share her stew on a stormy night. Seemingly alone, I rushed at her, only to be surrounded by baddies when she cast a spell to call in support. I cycled through my party members to make short work of the group. 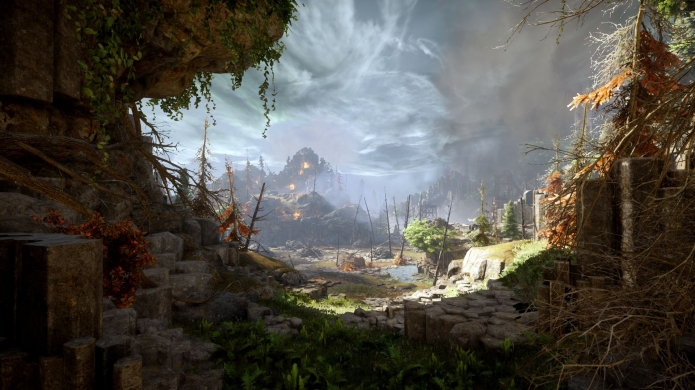 Heading back onto the main path involved trudging through swamp areas, which is apparently something the locals don’t do as this garners the attention of submerged nasties that block your way and generally add to the all-important risk/reward dichotomy of exploration. It did offer the chance to be distracted by loot a-plenty, and I noticed the presence of class-specific items, meaning players will be urged to embrace the caring=sharing equation when playing armour dress-ups with party members.

After what felt like 10 minutes, it was time for the next group to come in, and I found myself eager to have more time with Inquisition. While I rage quit on Dragon Age II’s corridor-like external locales, my time with Inquisition cast the right kind of magic over me to restore faith in the franchise and show that the BioWare promises are on track for an engaging action-RPG experience.

Read more about Dragon Age: Inquisition on the game page - we've got the latest news, screenshots, videos, and more!
Tweet