At Adelaide’s AVCon convention, we were given an interview slot with Chris Avellone to grill him over how he and the team at inXile Entertainment have created a sequel to a game from 1988 that few people remember, and how they’ve spent all that Kickstarter cash.

AusGamers: Wasteland 2 has been funded through Kickstarter, as have several other games you’ve been working on recently. Does Kickstarter funding change your relationship with and attitude towards development? Is it easier when you’re answering to fans directly or does it put more pressure on you?

Avellone: The pressure is the same, but it comes from different quarters. With a more traditional model the pressure comes from the publisher, and when it comes to Kickstarter the pressure’s coming from your backer’s expectations, whether they’re being met and whether you’re being open about your development progress. I prefer Kickstarter. I think what Kickstarter allows you to do is directly contact your target audience so that you know what they like and what they don’t like. It also means you can discuss systems, area design, and showcase creatures before the game is in its last three to six months, and actually have them share the development process with you. That’s a huge advantage because it can save you a lot of time if they don’t like something. 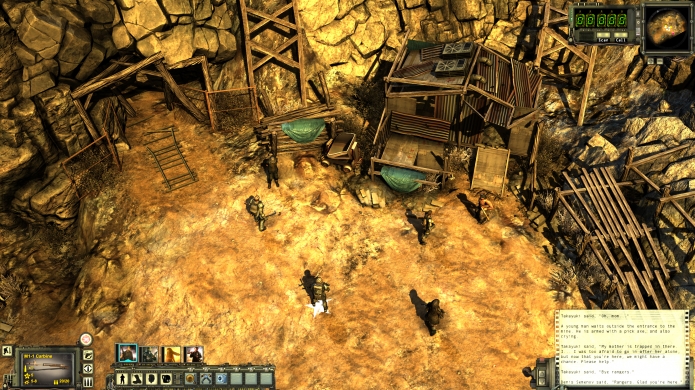 If you say ‘here’s a feature we’re going to add’ and they say ‘we don’t like that feature’, well…okay, then we don’t have to spend any programming time on it. Freeing any programmer’s time is fantastic. Having an open dialog has been great in that respect. There are challenges too though – there could be other design elements they might not be so happy with within the game, and there might be a point where you have to explain why you’re taking this approach, why you think it’s going to be good. And as long as you can give a well-reasoned critique for why you’re going in a certain direction, fans seem pretty understanding of that, and they appreciate that you’ve taken the time to explain it to them. Usually with a publisher driven model you implement a lot of content, and then in the last six months you really try to sell those concepts to the public. And that may be a more arduous experience than sharing it all the way through.

AusGamers: Who do you think is the target audience of Wasteland 2? Is it for fans of the original game from 1988, or are you trying to attract Fallout fans, or a whole new audience?

Avellone: Wasteland came out so long ago that I think a lot of our backers probably didn’t have the opportunity to play it. What I think they bought into was the idea of an underdog developer trying to make a concept be realised. Also I think it appealed to a lot of the PC audience who wanted to get an ‘old’ isometric style RPG, and to see more games like that. I also think that (director/producer) Brian Fargo was really good at building up a lot of energy and interest in the game. He’s done that for so many years, he’s a really good talker and speaker. I’m not sure how many people have played the original Wasteland, I think people just appreciate that a new RPG is seeing the light of day through Kickstarter. 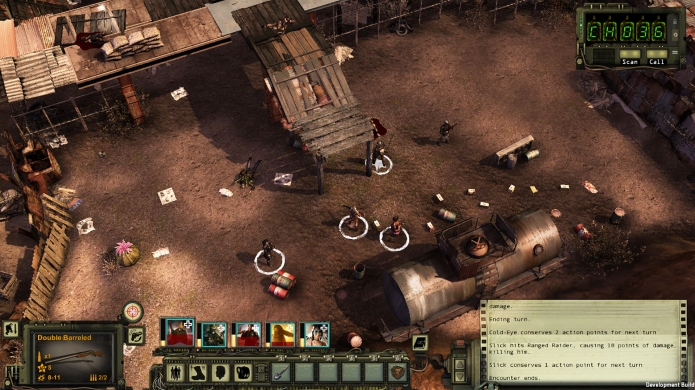 AusGamers: Is the original Wasteland close to your heart?

Avellone: I played it through two-and-a-half times. The half time I got killed in the sewers and dropped in a cul-de-sac no-win situation, which unfortunately was a bad game design decision in the original Wasteland, in my opinion. There was no way to win at that point.

AusGamers: That’s something you want to avoid with Wasteland 2, then?

Avellone: Oh, yeah. It was an old-school RPG convention that we don’t do anymore, and it should never happen. But those old RPGs were pretty brutal and uncompromising. So yeah, I played it a lot, and it actually changed my design philosophy going into computer games, because the way they implemented the design systems in Wasteland allowed you a lot of flexibility in area design. They did a really simple system where you can use your strength on a lot of different objects – say, I can use my strength on a door, or a manhole cover, or bashing my way through some rubble. I can use any attribute on any object. Because of the way they designed it, you could use your intelligence on things as well.

They actually designed an entire level in Wasteland 1 where you could program yourself to go into an android’s brain. You defeat this jerk sub-boss and you sever his head, but his head’s still talking, saying he’s not going to give up his secrets. So you say ‘well I’m going to jack into your head then, and take those secrets.’ And so you actually went to an entirely brand-new level where you were walking through the android’s memory. You can use your intelligence to solve puzzles or defeat monsters, and just because the system was designed that way it allows you to do a whole seamless level like that. 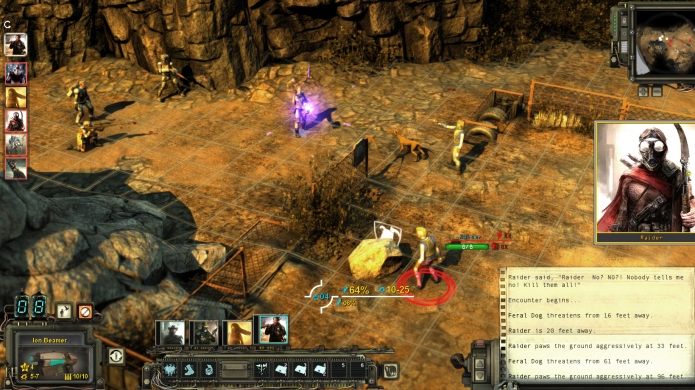 AusGamers: Do you have sequences like that in this sequel, then?

Avellone: There is a lot of fun that the designers had with creating areas that fall outside the norm but still use the same mechanics. So elements like that have been carried over, yes.

AusGamers: How difficult do you expect this game to be?

Avellone: While Wasteland 1 had some hard encounters, it wasn’t super difficult. In Wasteland 2, I have found all the combat haven’t been too bad if you’re thinking tactically. What you really need to watch out for is party attrition, like if you’re not monitoring your character’s stats and health and making sure you always have some sort of medic keeping you well protected, that in itself can make or break combat. You need to make sure your characters aren’t getting worn out.

AusGamers: Are these things you want players to learn and realise as they’re going, or will the game feature tutorials advising them on how they can play? Do you want to leave it up to players to figure out what the game is and how it all clicks together?

Avellone: The opening areas are good at teaching some aspects of how the systems work, but very soon after that things get pretty sink or swim. One of the concepts of Wasteland was that it was a series of hard choices that you have to make on a frequent basis. In Wasteland 2, very early on, you get a distress call from two different communities. You can’t save them both, so you have to decide which one you’re going to intervene with and try to protect, and unfortunately that’s going to destroy the other one. And that has a lot of reactivity, and you’re going to have to live with the consequences of not being able to save that other location. 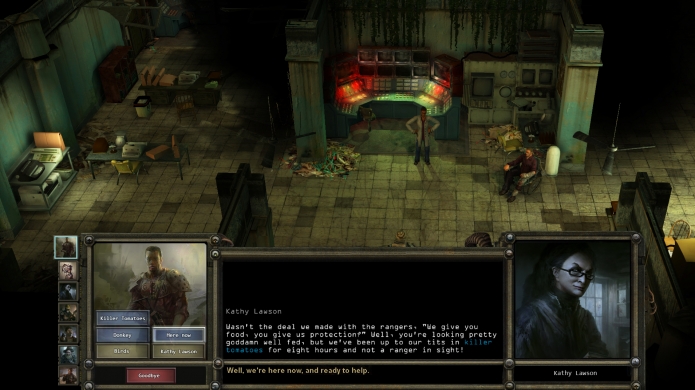 It changes the level design of that area you didn’t save – a lot of quests and NPCs are gone, there’s a lot more destroyed areas, you have to feel the repercussions. Then in the area you did save you might be able to access a companion that you might not otherwise, you get all the quests in that area, and you get a positive reception in that location. But it’s a very hard choice to make, and not a matter of choosing between good or evil or anything like that.

AusGamers: So you were talking about not being able to break the game, or get trapped, earlier. Are you worried though that there are paths through the game that are simply less satisfying than other paths, considering how much freedom (since you can kill literally anyone you meet, including quest givers) and how many possibilities the game affords?

Avellone: No, what we try to do with all our area design elements is, we try to include a template that runs through all the different character builds that a player could make. I don’t think, because we made that such a design convention, we were like ‘hey, if you specialise as a talky character, we have to make sure that every area respects that design decision and makes you feel cool for being able to use your character that way’. That has to be part of the checklist in every area. That’s a requirement. So I don’t think anyone will have content that’s made inaccessible or less interesting, although there will be different consequences and results from the paths you choose. 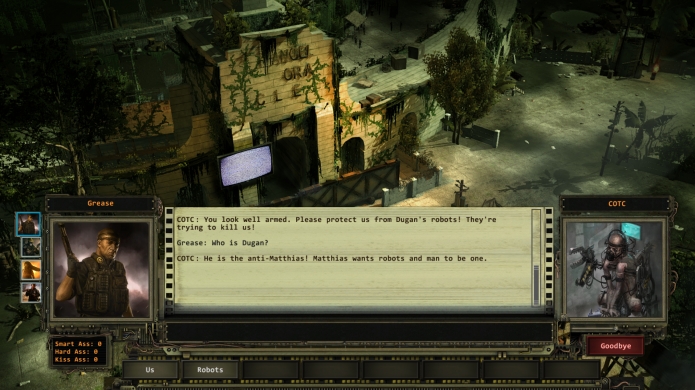 AusGamers: I’d imagine that the game that people most often bring up with you is Planescape Torment, right?

AusGamers: So when your name is attached to a game like that, that people are so fond of and which has established a legacy, does that hang over your head a bit? Do you feel like you need to work to make the games you’ve been on since then live up to Planescape?

Avellone: I guess every game that we approach, unless it’s a sequel to a previous game, the idea of trying to do better than that game is muddled by the fact that you’re trying to respect a new franchise and experience. When we made Alpha Protocol, our goal there was to make the best spy RPG we could, not to outdo Balder’s Gate or Wasteland. Planescape was a very unusual franchise, and I loved it, but the question isn’t often ‘how do we do better than that game’ unless we’re working on a follow-up or a spiritual successor. Of course, if the game we’re designing is similar to Planescape, we start asking ‘what could we have done better’? For example with Torment: Tides of Numenera, we’re dealing with the fact that Planescape Torment’s combat system was crap. There was a lot of narrative stuff that people really enjoyed, but it would be nice if there was better combat, or more dungeon exploration elements, or if players had more reasons to explore the world beyond text screens. So with that title we definitely refer back to and try to improve on Planescape.

Recent articles by James:Find and follow him on Twitter - @jickle.
Read more about Wasteland 2 on the game page - we've got the latest news, screenshots, videos, and more!
Tweet