We've taken Kratos and Atreus on an almighty journey in sequel territory. Is it as good as the OG?
Realms Apart | Our In-Depth God of War Ragnarök Review
Playing Cops and Robbers - Battlefield: Hardline Hands-On
Post by Eorl @ 06:00am 10/06/14 | Comments
Joab Gilroy takes a swing at Visceral Games' first entry in the Battlefield series, coming off feeling that the new cops versus robbers style does work, but may be playing it a bit safe...


Hi friends, I'm Joaby, it's E3 week and I have a brand new AusGamers preview for you. Today we're checking out Battlefield Hardline, the new FPS from Visceral Games. This isn't Visceral's first encounter with Battlefield, as the team previously worked on Battlefield 3's End Game DLC back in March of last year.

This is, however, Visceral's first full Battlefield game, and as you might expect -- it's quite the departure from DICE's games. The key difference here -- Battlefield Hardline is a cops vs robbers game, not a military combat shooter. 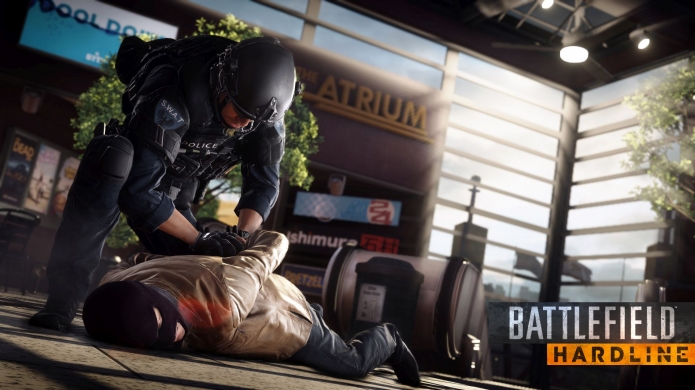 Cops vs Robbers is a timeless theme, and most of you watching this will probably have at some point played the imagination based game that children enjoy. In videogames the conflict has traditionally played out in only a few ways. In the Police Quest games (and the SWAT successors) a great deal of the game dealt with the ins-and-outs of how justice is served. Not following correct procedures saw you heavily punished, and so you became quickly acquainted with following the rules -- you'd only exercise lethal force if a perp ccpresented the threat of immediate harm to you or others, you'd always announce your presence at the scene of an incident and you'd read someone their rights if you arrested them.

On the other side of the fence, the police are often presented as a force of overwhelming power. When you are a criminal in games the cops often have superior firepower, armour and numbers. Games like Grand Theft Auto Payday 2 are built around deliberately and specifically avoiding having to encounter law enforcement at all, and if the shit hits the fan you often find yourself struggling to keep your head above the thin blue water.

Battlefield Hardline is different, because both teams are evenly matched. Both sides have assault rifles, smgs, grenades and helicopter gunships, and to be completely frank I feel like this is a mistake. Battlefield Vietnam did a fantastic job of creating a balanced game while still giving players asymmetric teams, and I think this should be the case here. In general, but especially in a post-911 United States, it doesn't make immediate sense that a private citizen is able to get away with mounting machine-guns and rockets on a helicopter. Transport choppers with wide doors, allowing teams to travel en masse through the skies while still sending rockets and small arms fire at their enemies make more sense to me. 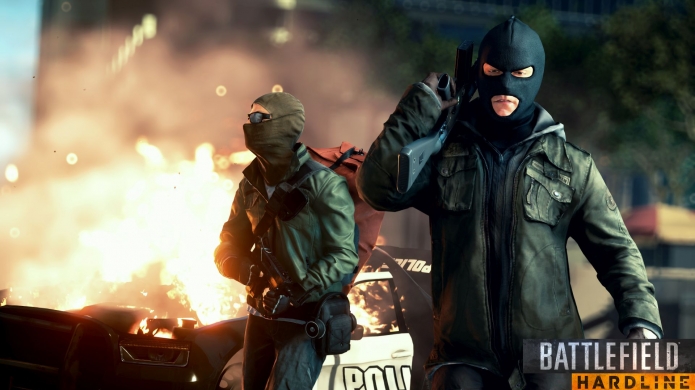 On the subject of things that don't necessarily make sense to me -- the respawning in battlefield games to me always represented the huge casualty rate in war. You didn't respawn as a literal incarnation of yourself, rather you represented a brand new soldier entering the combat zone. With the exception of The League of Shadows and the Foot Clan, however, most criminal organisations don't feature dozens or hundreds of expendable infantry. Criminals aren't taking up arms out of a sense of patriotic duty, and so the respawn heavy nature of Battlefield feels out-of-place here.

On the other hand, urban combat has often been one of the most popular settings in Battlefield. Maps like Metro and Karkand dominate fan favourite lists not because players don't want wide open spaces but because the close quarters leads to fast-paced and tactically varied combat. This feeling is in full effect here in Hardline, where high-rise buildings create canyons for choppers to battle through even as motorbikes race beneath overpasses below.

During the pre-e3 event Visceral was showing off two game modes -- Heist and Blood Money. I'll let Thad Sasser, the lead Multiplayer Designer on the game, explain Heist to you.

"Heist is an exciting new game mode that's all about the big score, or pulling off that perfect job. The criminals have to crack into armoured vaults and make away with the loot before the cops can stop them. That's the basic premise of the mode. There's a lot of emergent gameplay, as you'll find out. What's interesting about this mode is that it's asymmetric, which means one side attacks and one side defends so you have different jobs depending on what side you're playing on."

Superficially it sounds a lot like a Rush mode, but in practice it's quite different, better resembling the rugby-style obliteration. If the criminals side is paying even a little bit of attention at the beginning of a map the rush objectives are basically guaranteed to be blown up - it would take an absolutely outstanding effort from the Law Enforcement team to actually stop the crims from blowing open the armoured vehicles that hold the cash. Instead Law Enforcement is forced to exhibit map control, stopping the criminals from making it to the two separate drop off and escape points. 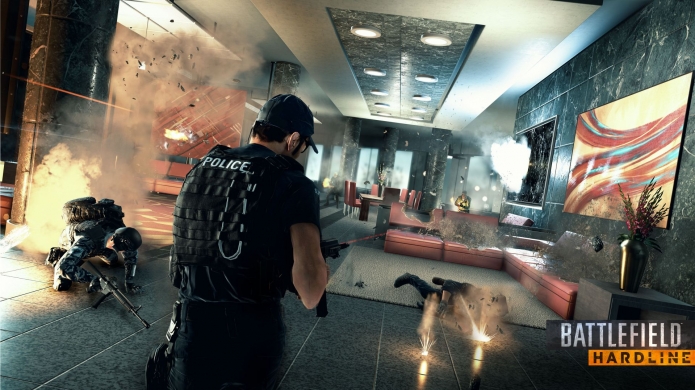 As you can see in this example, if the LE team fails to secure an escape area you can all but guarantee a point's capture. I think it would encourage teamplay more if the criminal team were forced to actually secure the drop-off area first -- maybe by putting the cash in a pickup cage ala the GO Bank map in Payday 2. This way a solitary criminal would have a difficult time doing literally everything for his team, and the LE would have a last ditch opportunity to save their game.

Still, Heist is a lot of fun. The separated defensive positions force players to use a significant portion of the game map creating multiple areas of conflict, which translates to a sense of impending doom while you play. You never feel like you're completely safe, because at any time someone might show up to assert their team's authority over an area.

The other game mode we played was Blood Money. Again, I'll let Thad explain the mode.

To put it simply, Blood Money is a single flag capture the flag mode. Unlike typical CTF though, you're forced to deliberately interact with the cash you're trying to capture, and one interaction equals just 100,000. To win the game you need 5,000,000, and the max you can carry is half a million so you're guaranteed 10 trips as a team if you want to win. 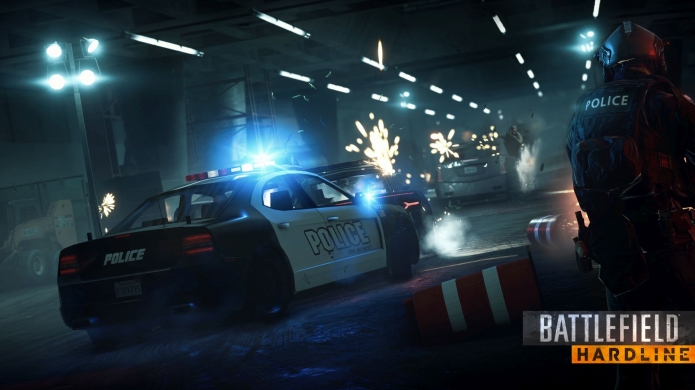 Blood Money puts a twist on the mode by allowing you to head over to your enemies cap area to steal what they've already taken, and this is what makes the mode interesting. Instead of heading for the enemy cap just to stop them from capping money, you're able to actively undo their progress towards their objectives. In the footage playing now the other team decides to stop attempting to take money from the cash pile and instead attacks our vault. Unfortunately for my team, I've decided I'll only use the taser any more. This is effectively like LeBron James ducking out with cramps with 4 minutes on the clock, because I'm basically carrying the sloppy bunch of losers I call team mates. As a result I suffer my first and only loss of the entire session.

The fast track to earning big points in this mode is definitely by taking advantage of the alternate path to victory -- returning money to your own vault gets you kills, rewards for the return and points for defending, making it an almost unbalanced degree of rewarding.

I felt like Blood Money wasted the map a little bit, because High Tension offers players a significant degree of verticality that goes unused because the money you're capping and the cap zones themselves are all at sea level. Placing the money on top of a building would be interesting -- players could fight for control of the elevators at the bottom, decent helicopter pilots would be utilised well for both drop-offs and pick-ups and players might find themselves trying out the new gadgets like the grappling hook or zipline more.

Yes, the zipline returns to Battlefield, an element sorely missed since is its debut in Battlefield 2: Special Forces. It affords players the ability to move very, very quickly, but it costs you an entire special weapon slot -- a complex bargain for some. Other special items include the Riot Shield, which players will get their hands on in Battlefield 4: Dragon's Teeth, the stun gun and baton combo as a police themed melee alternative, and the gas grenade, which works like a gas grenade.

With these items and the mostly lower-powered vehicles available to the teams in Hardline, the game definitely has a different sort of dynamic to it -- the emphasis on infantry combat is much stronger, so in our playtime there were far fewer other players with the tools required to deal with armoured or heavily armed vehicles. 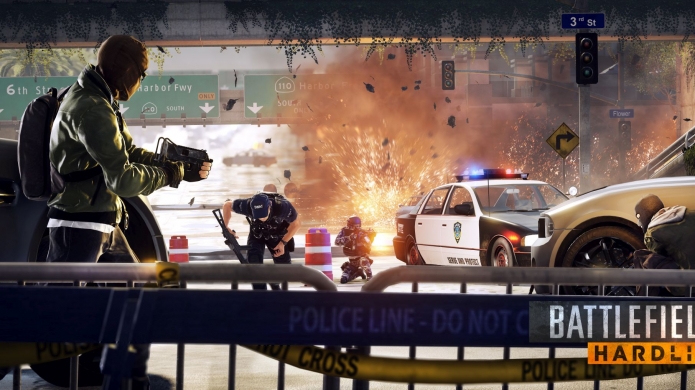 While preliminary speculation put Battlefield in the Payday/SWAT spectrum of games, having played it it's definitely closer to a Counter-Strike with vehicles. Still, what makes CS truly compelling is the ultra-refined attention to competitive shooting. Luckily Battlefield Hardline will benefit from any and all improvements BF4 receives, including the High Frequency Network Update already currently being implemented. Will this be enough to 'fix' Battlefield? We'll have to wait and see. What they've shown looks promising, but we'll need to see large scale roll-outs of the system -- left on high by default -- to know whether it works in practice.

Battlefield Hardline is fun to play. It's almost tailored to my favourite style of Battlefield play -- urban environments, fewer powerful vehicles and modes that accommodate both team players and lone wolves.

With that being said, it seems to be playing things very, very safe. Symmetrical teams make balancing far simpler, despite making zero sense narratively speaking. The UI is still very Battlefield, removing an immediate distinction between the numbered titles and Visceral's spin-off title.

Playing it safe is probably a good thing for Battlefield after the poor reception BF4 has had, and if it means we get a good (if not great) cops and robbers game I'm all for it.

Read more about Battlefield Hardline on the game page - we've got the latest news, screenshots, videos, and more!
Tweet