Zen 4 ushers in a new era for AMD CPU performance when it comes to straight-up gaming.
AMD Ryzen 7600X Review - Gaming Excellence
Insert Golf Pun Here - Hands-On with the PS4's Exclusive DRIVECLUB
Post by Joaby @ 01:51pm 26/05/14 | Comments
Joab Gilroy recently visited Evolution Studios in the UK to get hands-on with the hotly anticipated DRIVECLUB. Has GT and Forza met their match? Read on for his full impressions...


Accessibility is a dirty word these days. It's probably Blizzard's fault, if we're going to point fingers willy-nilly. Blizzard's pursuit of the concept of a more accessible MMO turned World of Warcraft into the juggernaut it would become, but it came at a price -- those concessions made to filthy casuals ticked off a heap of people who were happy with the way things were.

Accessibility isn't necessarily a bad thing, however, as DRIVECLUB sets out to prove. By creating a game with simulator-level attention to detail but accessible gameplay, Evolution Studios hopes to create a game people will want to pick-up and play -- not one they dump in the too-hard basket.

The immediate analogue is the ARMA series -- imagine if Bohemia Interactive put all their painstaking effort into creating an accurate simulation of their game-world and then actually dumped a fun game on top of it all -- that's what DRIVECLUB is. 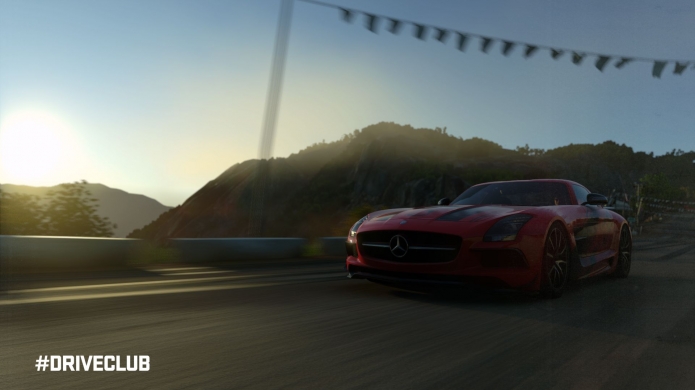 It's important to Evolution Studios that people understand that DRIVECLUB is not a simulation. Whatever you think of simulation racing games -- whether you think Gran Turismo or Forza Motorsport count or whether you'll accept nothing less than rFactor or iRacing - DRIVECLUB doesn't fit within that model.

And yet DRIVECLUB simulates an awful lot. It's sort of insane like that.

The insanity is everywhere. The game accurately models the outside temperature of the game-world at all times. This doesn't seem terribly crazy until you watch the game move at 500 times its normal speed and you can see that temperature tick downwards -- as midnight passes and dawn approaches you can see the internal display inform you that at 2 am in India it is 23 degrees Celsius. The fastest a player can move the world clock at is 60 times speed, meaning a full day-night cycle will take 24 minutes -- so you'll probably never really get to see the gauge tick down anyway. Oh, and they elected to not use the temperature in the handling model of the cars because it was a layer of complexity for the driver they weren't interested in representing -- so it all ends up being moot anyway.

It gets crazier from there, too, because that's not the only thing the game models and then discards in favour of accessibility. The aerodynamics of the cars are accurately represented within the game's physics engine, and the game itself has a procedurally generated damage model that it completely ignores by making all damage cosmetic.

According to Alex Perkins, the Art Director for the game, the attention to detail is critical to how players accept the game. 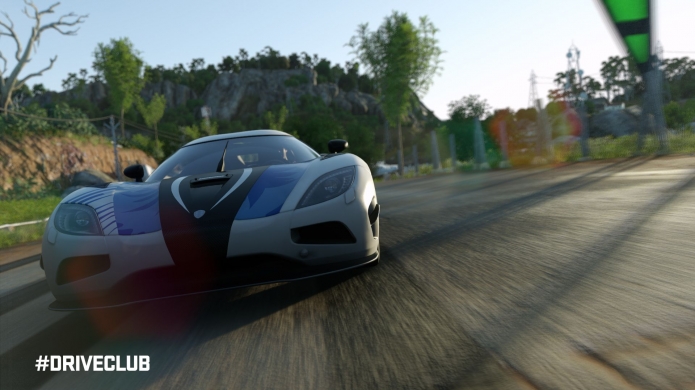 "The subtlety and the subliminal elements help sell everything,” he explains. “The moment you start missing stuff, especially with the uncanny valley level stuff, then people start to pick the holes much quicker. So you've got to be coherent -- there's no point having one element that outshines all the others, because the two break each other."

So the game features audio so realistic BMW and Mercedes Benz took what Evolution captured to use for their own purposes. It features star maps that are accurate depending on location, so you can find North if it's a cloudless night. It features KERS and DRS as elements players can engage on their vehicle despite only one car in the game using them.

And it bundles all of this madness into a package which actively makes concessions for players. The McLaren P1 (the aforementioned KERS/DRS-enabled vehicle) has millisecond perfect speed data measurements, which means it does 0 - 60 in 2.7 seconds, because the physics model is that bang on. But all the braking speeds are altered, they're all more forgiving, so the 60 - 0 times are actually much shorter. The tracks aren't terribly wide to begin with, but the game will put you back on the road if you spend more than 3.5 seconds off it. It puts a fair focus on the concept of competitive drifting, which means even if you're not the fastest racer you can still take fast cars around a track and enjoy yourself.

Because it is internally consistent, however, if you are a competent racer you can actively compete with others, and using knowledge learnt from simulation racing games will allow you to push the car further than you would otherwise. The fact that the game allows you to brake faster simply shortens your braking distance into corners -- it doesn't mean you'll find success by turning and braking at the same time. 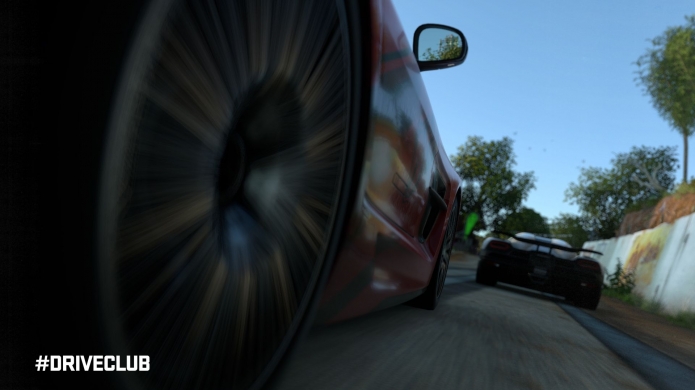 If you are a racing game fan, the experience is initially a little off-putting. I found myself braking far too early quite a bit, and it took some time to adjust to how the cars handled. We'd been set a challenge on the day, tasked with putting in the best time around a point-to-point track in India, and on my first attempt I barely made it into 8th place against the AI (for shame - Ed.). As I grew accustomed to the car, the driving model and the track, my times started wasting away until I'd shaved more than 20 seconds off my first time. It was enough to put me in third place amongst the journalists -- 0.4 of a second behind one of my club mates, who placed second.

The club meta element is a huge part of DRIVECLUB -- it's right there in the name, after all. According to Simon Barlow, the Design Director for the game, it was originally about bringing the clan experience to racing games in a way that kept players returning. So when you play you might initially join a club with mates, but if you want to win challenges you'll probably prefer to join a club with other players of a similar skill level.

Clubs are limited to six players, so you're definitely going to see some friendships tested if people aren't able to pull their weight. In the club challenge we participated in on the day my club finished with the second and third best time -- but the rest of our club failed to crack the top 15, and so our average time killed us. This is where the clan mentality sets in -- while one player can carry a team to victory, it's not something you want to rely on all the time.

Still, if you do want to go down the friend-based club route you'll still get a lot out of DRIVECLUB -- not every challenge is club-vs-club, so you can instead join with your friends for something more closely resembling a co-operative experience. 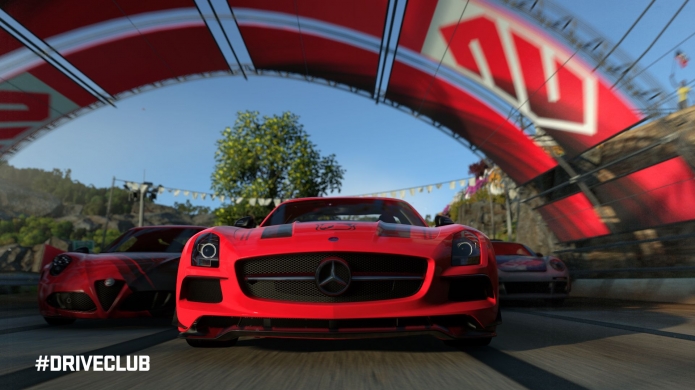 Clubs level up alongside players, and as you gain levels your club does too. This means you and a group of mates can create a club and use it to unlock cars and liveries by sharing the burden, and you can still engage in challenges by simply challenging one another.

The way the game constantly tells you about new challenges is great -- it's like a Twitter feed of races. Your mate Fred just took two seconds off your time in India, your pal Jim challenged you to beat his drift score in Finland -- all this information is immediately fed to the front page of your game so you always know what's going on.

Speaking of India and Finland, the real magic of DRIVECLUB is in the locations. The game takes place in four locations across the world -- Scotland, Canada, Finland and India -- and the detail in each is simply staggering. Scotland looks like it was pulled directly from a Jaguar ad, all rolling green hills and moody dark skies. Aurora Borealis (At this time of year? At this time of day? In this part of the country? Localized entirely within your kitchen?) dances across the skies of Finland (but only if you're lucky). Tea plantations coat the brown of India in a gorgeous green. And Canada? O Canada. The effort the team put in making the game-world look beautiful is enough to make you lament having to stay in your car.

If DRIVECLUB were the poster child for accessibility in games, people would demand it in every game. Where other games might use the term as a PR friendly alternative to "dumbed down", in DRIVECLUB it's about exhibiting restraint. It's about simulating absolutely everything and then taking a step back and removing the things that make games frustrating. Evolution Studios has their cake, and they're going to try to eat it too. I think they can do it.

Read more about DRIVECLUB on the game page - we've got the latest news, screenshots, videos, and more!
Tweet