A slice of life full of meaning, and an Aussie made gem to boot
Wayward Strand Review
Press Start to Dark Knight - Batman: Arkham Knight Hands-Off Preview
Post by nachosjustice @ 05:50pm 27/03/14 | Comments
AusGamers was invited out to a hands-off demo of Batman: Arkham Knight during this year's GDC, courtesy of Warner Bros. Read on for our full thoughts...

Last year’s Batman: Arkham Origins was a divisive affair. While it marked a ballsy first title for Warner Brothers Games Montreal, it lacked the cohesion and consistent emotional resonance of Rocksteady Studios’ Arkham Asylum and Arkham City games. In many respects, it seems it existed as an easy way to show a continuation of the Arkham series and a way to tide over Arkham fans in the long lead-up to the recently announced Batman: Arkham Knight.

There was no mention of Arkham Origins during the GDC presentation of Arkham Knight as expat Aussie and the best damn game presenter you’ll ever encounter Dax Ginn (Marketing Producer at Rocksteady) talked the filled room through what we were about to see, while Social Marketing Manager Gaz Deaves had the enviable role of playing the demo to Dax’s energetic commentary. 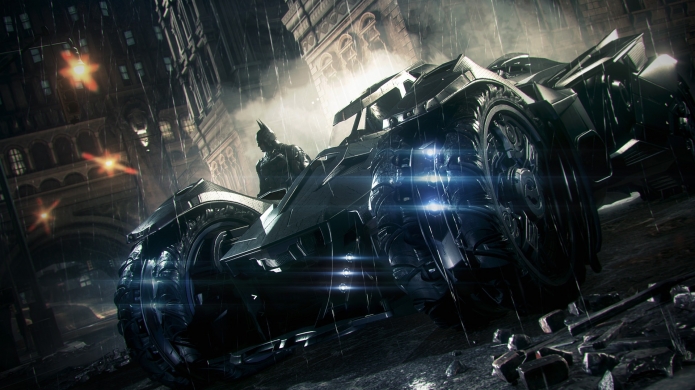 Arkham Knight is the third and final game in the core Rocksteady series, and it has a hell of an intimidating back catalogue to fight against to sell this as the best game yet. After all, Arkham Asylum was a fantastic, albeit somewhat flawed affair (repetitive boss battles, anyone?), while Arkham City was dangerously close to perfection. Arkham Knight does have all of the potential of new-gen consoles to add to its scope, but the all-important dramatic side—a recurring theme in all things Arkham—has the potential to be impacted by the lack of Batman maestro Paul Dini’s name on the writing credits.

Granted, writer/director of Arkham Asylum and Arkham City Sefton Hill is still at the helm and has been plotting the ending of the Rocksteady trilogy since before its last Arkham game shipped. Time will tell how pivotal Dini’s involvement was in shaping the Arkham series’ effective pathos. In terms of a first reveal for Arkham Knight, though, you’d better believe that the overwhelming majority of the product was Bat-dressed to impress.

The pre-alpha demo was played live on a PC by way of PS4 controller. Dax confirmed the PC was running on hardware that was comparable to new-gen console hardware, which is refreshing for a few key reasons. First and foremost, it means Rocksteady isn’t misrepresenting how Arkham Knight will look on consoles. Second, Arkham Knight looks absolutely breathtaking in its seamless vision of a fully realised open-world Gotham City that’s reportedly 20 times larger than the hardly small game world of Arkham Asylum. Third, and most importantly for our PC readers, it means Arkham Knight has the potential to look even better on a NASA-certified Crysis-slaying rig. It’s worth noting that there were some visual oddities at play: jerky frame-rate, rare pop-in and a couple of instances of a loading logo (the latter being something Rocksteady wants to avoid in Arkham Knight).

Outside of the pretty that’s dripping from every visual facet of this game more liberally than the rainy Halloween night Arkham Knight takes place on, the first noticeable improvement on the Arkham series is seamless transitions between gameplay and cutscenes. It’s all stunningly rendered in Rocksteady’s heavily modified version of Unreal Engine 3, where shifting between cutscenes and gameplay is incredibly seamless and doesn’t rely on the usual tactics of black screens, fading in our out, or other jarring cutting methods. 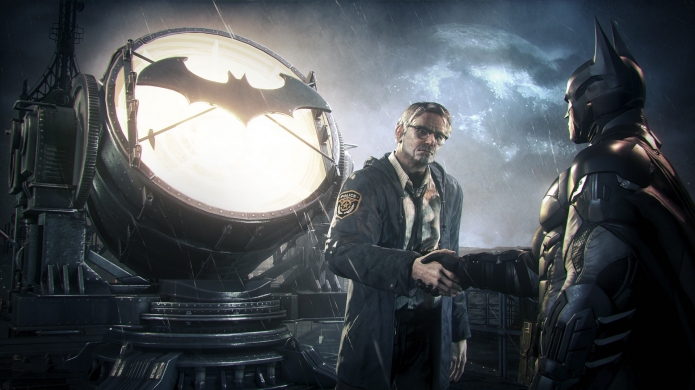 This ties into Rocksteady’s intentions to escalate its second Arkham sequel above what’s come before, as well as provide a greater sense of emotional resonance for players. This was most evident in the platonic love triangle consisting of Batman, Commissioner Jim Gordon and Oracle (Commissioner Gordon’s daughter, Barbara Gordon). Oracle is a fully fledged character that Batman can visit this time around, with her mini-Batcave-like hideout inside the Gotham clock tower. At the start of the demo, she’s lied to her father about being safely outside of Gotham as part of a citywide evacuation because of a chemical-weapon threat from Scarecrow. Gotham’s 6.3-million person population, it seems, has been conveniently reduced to a hive of scum and villainy.

Oracle later laments about lying to her father; an attempt at an emotional connection with the man behind the Batsuit that falls short as he coldly keeps the topic of conversation on the mission at hand: finding Scarecrow. Rocksteady assures fans that this obvious tension setup between the Gordons and Batman will have a pay-off later in the game. Considering this is Rocksteady’s last Arkham game and how willing they were to kill off a major character at the end of Arkham City, there’s a strong possibility more major characters may fall.

Speaking of that dead major character from the previous game (seriously, if you haven’t finished Arkham City, go do it now), their demise has major narrative implications for Arkham Knight and, refreshingly, Rocksteady has been very clear they won’t be returning from the dead, either. This particular death has resulted in a unification of Batman’s foes with the express purpose of killing the Dark Knight.

Set 12 months after the events of Arkham City, though, the problem for the baddies is Batman is at the peak of his crime-fighting prowess. This means Batman’s Rogues Gallery has had to step it up a notch if they hope to have a chance at taking down the Dark Knight. Thanks to cape improvements and a grapple upgrade, Batman now has the ability to zip and soar faster and higher than before. This makes city navigation a breeze, but it’s not the only way to get around. 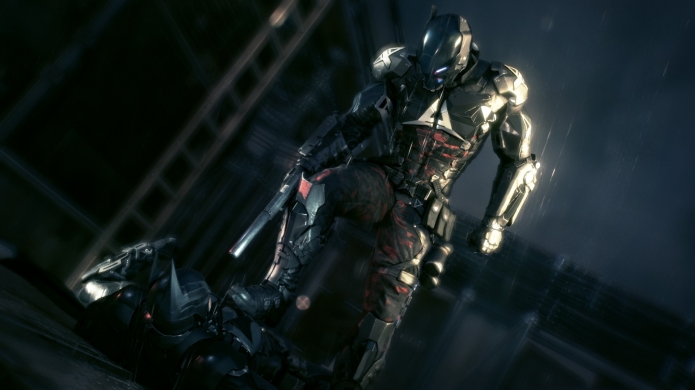 Dax was incredibly animated during his introduction of the Batmobile, which was warranted given how awesome it is. For the first time in the Arkham series, players will be able to take control of Rocksteady’s take on Batman’s iconic ride. Forget the Batwing fast-travel system of Arkham Origins, Rocksteady wants you to combine faster gliding with the afterburner-powered speed of the Batmobile.

It has a few key previous incarnations of the car rolled into its design, but it stands apart as its own beast, which Rocksteady boasts has a strong connection to the design of Batman’s new suit. Like Christopher Nolan’s Tumbler or the Bat-tank in Frank Miller’s legendary The Dark Knight Returns, Arkham Knight’s Batmobile is intended to forge its own path. While blue arrows projected on the road in front point you to your destination at all times, it’s a whole lot more tempting to find shortcuts, or make your own, as it effortlessly smashes through cars, fences, certain walls and pretty much anything else not built atop a concrete slab.

The Batmobile can be summoned at any time with the push of a button and it appears in mere seconds to whisk Batman away. When driving, press the eject button to launch Batman into a high-speed glide, meaning the best way to navigate Arkham City is clearly a combination of soaring and driving. During the demo, Batman’s mechanical steed was put to the test in a Riddler challenge room that Dax described as an “intellectual racetrack”. The Dark Knight had to perform three laps of an increasingly challenging racetrack that required Gaz to hit L3 to activate a radar pulse to open doors and extend ramps while mid-air.

Gaz made it look easy, even in parts where the Batmobile scaled walls and sped along the roof, but the test ended with the promise that such tracks would be a whole lot more challenging from that point forward. Arkham Knight isn’t all about the Batmobile, though. Predator scenarios—the stealthy sections of the Arkham series—now have the added benefit of ‘Fear Takedowns’. If planned correctly, Batman can quickly dispatch up to three armed thugs that venture too close together. 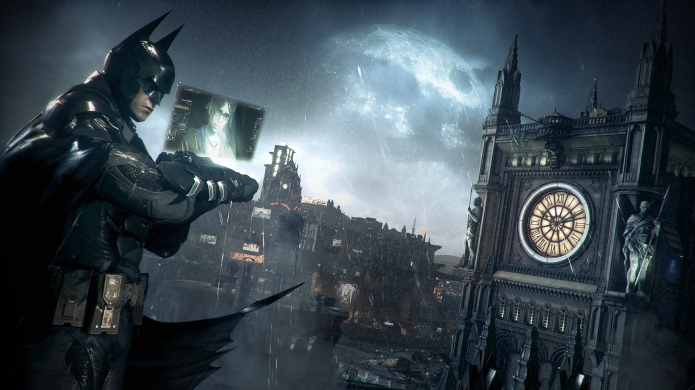 This was only showcased in what felt like a training instance of the new move, so I was concerned it may make Predator scenarios too easy. Thankfully, when I expressed my concerns to Dax, he admitted that these were emergent events created by what the improved AI behavioural patterns dictated in such scenarios. Put simply: the bad guys are smarter and you shouldn’t expect them to conveniently clump together for easy submissions.

Fans of fisticuffs have not been forgotten, either, as Arkham Knight continues to improve on the continually improving Freeflow combat system. New animations make the combat even smoother, but the most impressive new addition is the ability to start the fight from the air thanks to the ability to Quick-fire gadgets while gliding. For tactical players, this means you can use the line launcher to create a perching spot when soaring over Gotham.

For aggressive players, this translates to the use of combat gadgets such as Batarangs to start your combo before your Bat-boots have hit the ground. To add greater diversity to the Caped Crusader’s combat repertoire, he can now hold on to bats and pipes for longer (until they break or are discarded); environmental counters take advantage of contextual items such as circuit boxes for quick takedowns; while the counter throw offers the possibility of launching an attacking foe back at his buddies.

Couple this with the promise of new yet-to-be-revealed gadgets and an all-new rioting system that controls how gangs roam through Gotham, and Arkham Knight is poised to offer the best combat yet. Speaking of the Arkham Knight title, it’s in reference to an all-new antagonist created by Rocksteady from the ground up in collaboration with DC Comics. 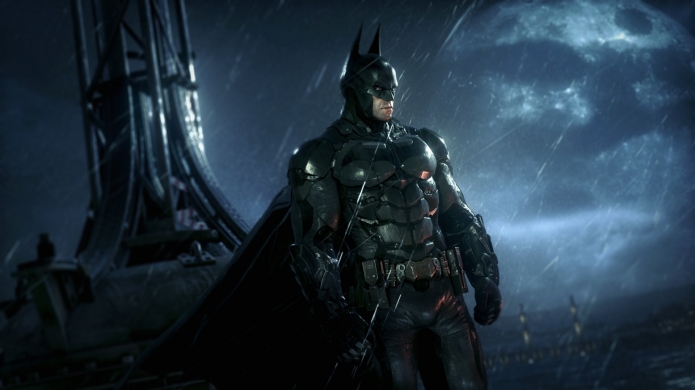 Dax was unwilling to confirm anything beyond his name, the Arkham Knight, and the fact he’s an entirely new character. The glimpse of him at the end of the demo showcased what looked like a techier take on the Batsuit, including familiar ears on the cowl, albeit minus a cape. Unlike Batman, he also has no problem using firearms, and was happily unloading silenced pistols akimbo at a surprised Dark Knight for the demo finale.

Regardless of the identity of this new player, Arkham Knight continues to prove that Rocksteady isn’t content to rest on its Bat-laurels, with the studio’s ambition matched by the potential of the new-gen hardware. It may be beautifully rendered, but it’s refreshing to see the developer pushing the dramatic angle in this first-look demo and I can’t wait to get hands-on with this trilogy closer down the track.

Read more about Batman: Arkham Knight on the game page - we've got the latest news, screenshots, videos, and more!
Tweet