A celebration of the long-running franchise and a great way to kick off Switch gaming in 2023.
Fire Emblem Engage Review - Strategy Gold
Diablo 3: Reaper of Souls Closed Beta Diary 4 - The Little Things: The Spectacular List-tacular Wrap-Up
Post by KostaAndreadis @ 11:22am 17/02/14 | Comments
In his fourth and final diary entry for the Diablo III: Reaper of Souls closed beta, Kosta Andreadis wraps up his experience nicely while pointing out a number of smaller things he hasn't really talked about yet, but that also make this new expansion better than the original game in almost every way. Read on for his last thoughts before the game drops proper this March...


As the Reaper of Souls beta draws to a close, the idea that weapons you’ve come to love and shiny armour you’ve been using daily to bask in your own reflection in, will both be lost to time -- is beginning to take hold. But this is simply the way of the beta, a privilege that many writers take for granted, one that comes with a retail price of having to start again from scratch. Reaper of Souls, the first expansion for Diablo III, is one of those rare beta gems, one where even though a whole stack of legendary weapons will be lost forever, the reasons to come back and start fresh are simply too many to ignore.But in the end sometimes it’s the little things, moments and minor details that prove to be the ones that linger in your mind.

But First
Before we begin though, a moment of silence for the Butcher’s Carver. A level 70 legendary weapon so menacing it continuously drips blood, as if it has spent so much time in a butchery as to be perpetually there even when it’s not -- like some sort of trans-dimensional weapon. It also houses the spirit of The Butcher, the Act I boss in Diablo III proper, who now lives within the weapon and still makes time to yell and grunt every time you talk to another character. You’ll be missed. 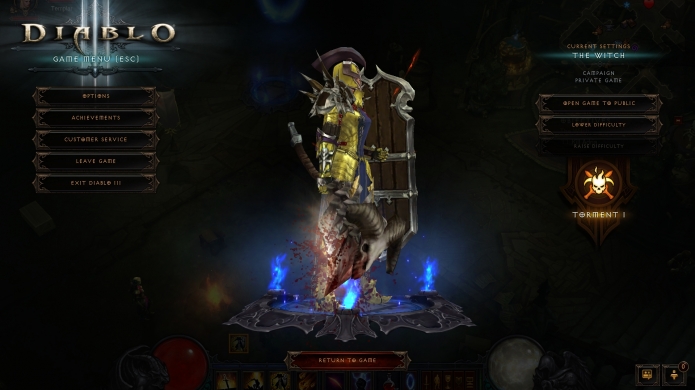 Taking a Good Look
New to Reaper of Souls is the ability to transmogrify items -- which is also apparently a real word. In addition to the jeweller and blacksmith the expansion adds a gypsy to the mix who can mess with item enchantments and even change their look. Although the outcome is strictly visual, being able to change the colour of your items to make them match in Diablo III was a feature used by many, as having a colour coordinated outfit can be a source of pride both in and outside of games. The strange thing about this feature though was that in order for you to actually get a close look at your new get-up, you pretty much were limited to moving your face closer to the monitor. The old ‘any screen is a big screen approach’.

In addition to colours, Reaper of Souls adds the ability to also change the very look of an item, where you’re given a list of options covering all the armour and weapons styles you’ve encountered with prices set around rarity. Thankfully though, Blizzard has actually made the vanity process itself a lot easier to access. Now by simply pausing the game, your screen will be filled with your character, literally, as they’ll take up the entire screen. It’s here you can spin them around like a ballerina (for lack of a better analogy), and bask in the glow of wearing matching boots and bracers.

Nice Looking Map
Adventure Mode is fantastic, it allows you to travel to and from any place you wish regardless of Act to complete bounties, kill monsters, and collect loot. Now with a simple tap of the map button you can travel from the sandy swept dunes of Act II to the gothic buildings of Act V through a few easy clicks -- and also with the visual aid of fantastic looking hand drawn maps. The new map interface is a wonderful addition and works wonders in bringing together all of the various locations, making them feel like they’re part of an actual world to explore as opposed to a linear string of locations and tile sets. Seriously brilliant work on Blizzard’s part, and they would even make the most diehard Tolkien fans put down their "Twelve Dwarven Songs to Get Your Lasses Off Their Asses" books and take notice. 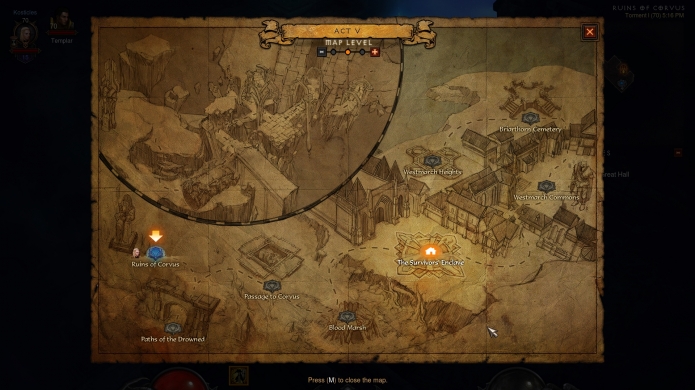 The Soothing Sounds of Sounds
One of the most overlooked aspects of gaming in general would have to be sound design and music, and sure you can’t really overlook something you can’t see, but you get the point. Blizzard has always excelled in this department and Reaper of Souls is no different, but the new musical score that accompanies Act V is probably some of the studio’s finest work yet. It’s so good, that it instantly brings up comparisons to the music from such classic Stanley Kubrick films as The Shining and 2001: A Space Odyssey. And not in the sense that it copies or sounds the same, but in the way it feels iconic, grandiose, sombre, and intense.

Though, it does kind of sound the same, but hey, that’s not really a bad thing.

The Mysterious Encounter of the Rat King in his Rat City
Outside of the main quest lines, Act V is probably the most open environment yet in Diablo III. And much like the main game there will be new hidden areas and dungeons to explore the more you play through each of its locations. One of these dungeons which opens up, not tied to any quest, takes you to an underground sewer full of giant rats. And these are specific enemies that only seem to appear in this one location -- which also turns out to be absolutely ginormous. Chock full of rat killing action too, with seemingly thousands to wade through, and taking the best part of an hour to explore. Although it doesn’t feel out of place but it would be nice to know exactly why these giant rats have created their own underground society. Well had created, as they’re all dead now.

A Friend in Need
Not only are the single-player companions now worthy, err, companions, but they also have their own mini-quest lines. So in addition to actually doling out a decent amount of damage and using abilities that are helpful even after you hit level 70, they also have personal scores to settle -- which come in the form of companion-specific dungeons and bosses. These are all welcome additions too, and they also help in stopping the Templar from talking about his order and all the weird Templary things he used to get up to. 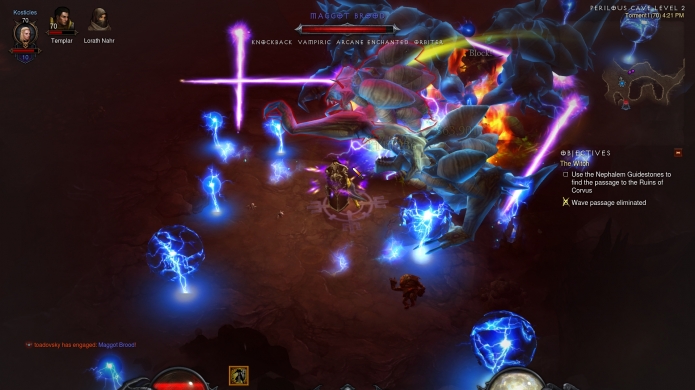 New School for the Old School
In addition to the new Crusader class which we’ve talked about, each of the Diablo III base classes also get new skills to go along with the new level cap of 70. The Wizard class now has a new skill that allows them to call in a black hole that draws all enemies to a singular point, making it perfect for cooperative play or even to just combine with other Wizard skills. The Monk has a new skill called Epiphany which makes their kung-fu stylings even more dangerous as it basically makes you teleport directly to an enemy every time you attack, regardless of their location. Finally in what will most likely become an overused ability is a new skill for the Demon Hunter class that turns the game into a Raiden or 1942-clone shoot ‘em up (or shmup) as they spray ammunition in all directions whilst moving around the screen.

Paragon and On and On
As a band-aid fix made a while ago Blizzard added the ability for player’s post-level 60 to keep accumulating experience that translated into a new levelling structure called Paragon, which made incremental increases to your character’s base stats. It wasn’t unwelcome but it wasn’t exactly time to pop open the champagne either. The Paragon system overhaul in Reaper of Souls is a champagne-popping worthy addition as all upgrades are tied to your account and carry across all your characters. Not only that but they offer skill points which can be added to a large number of attributes from the more basic things like strength to the higher level necessities of critical hit percentages and life on hit recovered.

And we could keep going, but after spending a lot (some would say "that’s more than a lot dude") of time with the beta the overall impression is this: there’s simply no way you would ever go back and play the original Diablo III. And not because it’s a bad game, but because this new version is just about better in every way.

See you in WestMarch.

Read more about Diablo 3: Reaper of Souls on the game page - we've got the latest news, screenshots, videos, and more!
Tweet