As the latest LG OLED, the CX presents a high-end display that takes OLED technology forward in meaningful ways.
LG CX 65-inch 4K OLED - A Stunning Next-Gen Ready Display
Keeping Quiet in the Dark - Thief Hands-On
Post by Joaby @ 10:53am 25/01/14 | Comments
When you finish a game like Thief, you don't sit down to talk about the narrative. You talk with your mates about how you used a water arrow on one torch and a fire arrow on another to confuse some guards while you stole a necklace.


I hadn't seen Thief before this week. I'd played the other games, and I'd heard... disconcerting things about this reboot. I'd heard the E3 demo had Quick Time Events, that you earned experience for killing and stealing. That Garrett had gone from master thief to badass robber/assassin.

I'll admit that I was worried about what had happened to the master thief before I sat down to play the game.

So it came as little surprise that the start of the game was a bit wonky. The idea that a game needs a tutorial wasn't an omnipresent concept when the Looking Glass Studios/Ion Storm games came out. Games told you about the basic concepts of its mechanical workings and then shoved you in the deep end. So it felt a little weird to find myself being corralled into spending the first half an hour of the game learning how to sneak, distract and steal. 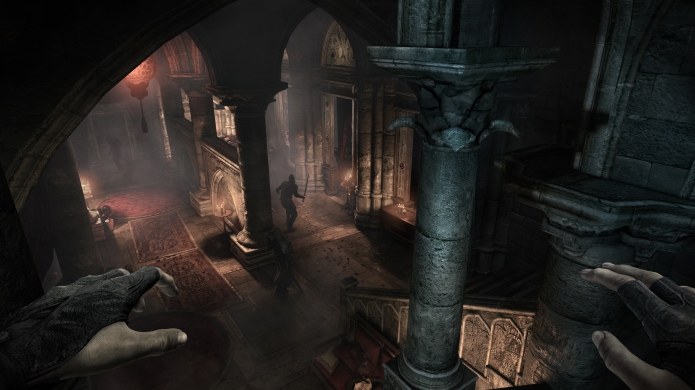 The interactions between Garrett, the anti-hero protagonist of the series, and Erin, his protege/companion/competitor/story macguffin, are awkward and not terribly well written. Because they seem critical in motivating the player, it certainly seemed like my immediate impressions were correct. I didn't like what I was seeing, and I thought the reboot wasn't very good.

Damn was I wrong. Forget the story, forget your expectations -- with the exception of the Tutorial segment, an element I wholly appreciated but didn't completely enjoy -- Thief is looking like an awesome game.

After the prologue you're plonked near the entrance to The City and tasked with getting back to your home -- the Clocktower in the centre of The City -- and the magic begins. Thief is about options. It's about your options in the menus, where you can turn off basically... everything. Seriously, everything from the objective markers down to the lightgem itself can be turned off if you want, so you can roam around The City hudless just as Hermes, God of Thievery, intended. While you're in the menus, you've got options about the difficulty settings, where you can jack up or lower the difficulty as you wish. You can play as a ham-fisted Clouseau-esque burglar and get away with it on the easiest setting, but if you want you can whack the whole thing up to ultra-hard, playing without Focus (more on that later), with super-alert guards hunting you every step of the way, the whole time knowing that if you fail just once you'll have to start the whole game over from the beginning. And of course, you can play everything in between. 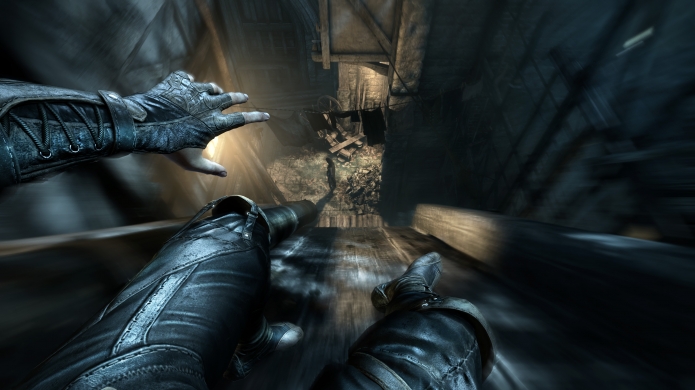 These menu options aren't restricted to PC players either. Obviously I played it on PC, because duh, but the team at Eidos Montreal went ahead and made all of this available to the console players as well. Who knows, maybe once they've had a taste they'll finally realise what they've been missing the whole time.

Thief isn't just about screwing with menus to customise your game the way you see fit though. No, the game itself is about options. From one angle it might seem like you've only got two angles of entry into an area, and if you're happy with either of them you're welcome to go for them. But if you don't like the erratic way that guard moves, or you're not crazy about just busting through the front door, the level design in Thief is open enough that you can find a different way in. It might involve sneaking through a sewer or a vent, or climbing over a fence and onto the roof, but if you search around enough, you'll almost always find an alternate method of ingress around.

What you'll also probably find is a secret area. And if you look hard enough, there's a chance you'll find a secret within that secret area, another puzzle you need to try to solve before you move on.

The puzzles don't pull any punches, either. I spent the better part of an hour trying to crack a safe before giving up -- not because I was no longer interested but because I was running out of time. When the full game drops I'll probably search for the prototypical solution for hours. 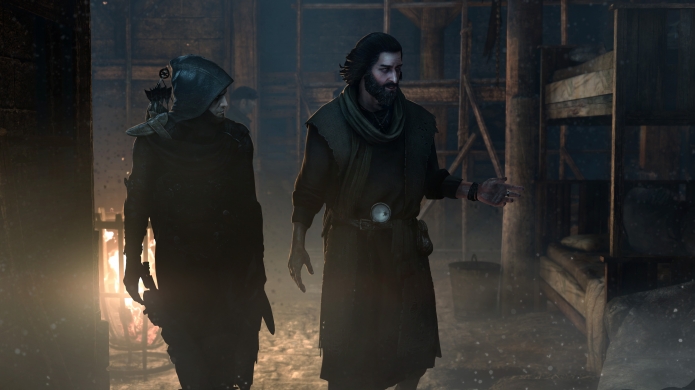 That's the beauty of this new Thief -- you get out what you put in. If you want to Ghost your entire way through, shutting safes after you've looted them and not attacking anyone, you can. You can shoot guards in the brain and leave every door you come across open like an Untalented Mr Ripley if you're so inclined. Guards see open doors and investigate, and they check obvious hiding spots for thieves (especially those who murder their friends) so going all Robin Hood everywhere will make your life exceedingly difficult, but the option is there.

In classic Thief fashion the game ranks your play at the end of each level, which will further encourage players to explore. I know I felt a little disappointed in myself when I got to the end of the chapter with just 56% of all the available loot. I didn't pickpocket everyone I could have, I didn't open every safe or search down every alleyway. If I'd gone back to redo that chapter -- an option immediately present on the stats screen -- I could have done better, and because the game gives you so many options it felt like it would be the right thing to do.

Thief takes a lot of cues from Deadly Shadows, the third Thief game. It allows you to explore The City (though the rebooted City is much larger), and it's full of completely optional sidequests. Instead of drip-feeding the player sidequests one at a time, you'll get handed a bunch at once and you can do them (or not) at your leisure. And while we're on the subject of Deadly Shadows, the team at Eidos Montreal has paid close attention to one of the most iconic elements of the Thief series... The Cradle. Our Square Enix hosts for the day didn't want to spoil anything but told me with a grin that they were very aware of The Cradle's reputation and the expectations they had to live up to as a result.

I was terrified that Thief was going to be another blockbuster style reboot, all style and no substance. The storyline at the beginning gave strength to my concerns, until I remembered I never really gave a shit about the story in Thief games. When you finish a game like Thief, you don't sit down to talk about the narrative. You talk with your mates about how you used a water arrow on one torch and a fire arrow on another to confuse some guards while you stole a necklace. Or how you managed to finish lockpicking a door mere moments before a guard returned on his patrol.

In a world where games on PC get treated like second-class also-rans, with settings hidden in .ini files or locked away pending the efforts of clever modders, Thief is swimming against the current and offering every option it can to gamers on every platform. It's indicative of the game's philosophy, through and through.

Read more about Thief on the game page - we've got the latest news, screenshots, videos, and more!
Tweet