Overwatch 2 is launching this October, and with a big reveal stream showcasing what's in store, we break it all down...
Overwatch 2 - Everything You Need To Know
Diablo 3: Reaper of Souls Closed Beta Diary 2 - The Not-So Long Road to 70
Post by KostaAndreadis @ 10:53am 15/01/14 | Comments
AusGamers' Kosta "Toadovsky" Andreadis is currently running the Diablo III: Reaper of Souls closed beta through its paces and will be supplying us with a diary of his experiences every few weeks. Read on for his latest update on the new level cap of 70 and what that means gameplay-wise...


At the time of release getting a character to Level 60 in Diablo III meant you had to play through the entire campaign three times, replaying the same quests and defeating the same bosses -- in order. There was no way out of this linear path, and as the difficulty increased certain sections became harder to manage leaving players with little choice but to stop at regular intervals, grind for items and gold and then go to the auction house to buy better equipment -- before proceeding any further. This is a sequence of events that Diablo III players with more than one character will be familiar with, alongside the fact that once they reached the level cap of 60, the incentive to keep playing diminished a lot quicker than the time it took to get there.

Blizzard acknowledged all feedback that alluded to the above, and since release, over the course of many months, made changes to the game’s difficulty progression as well as implementing a post-Level 60 character progression path with the Paragon system. All welcome measures to be sure, but they also served as mere band-aids to a system that needed fundamental changes in order to move in the right direction. 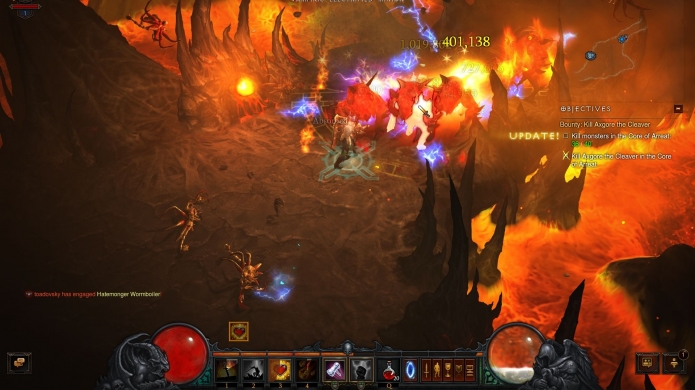 Reaper of Souls, as stated previously, is an expansion providing a new campaign Act to play through in addition to a new character class to play with, the Crusader. It also raises the level cap to 70. More importantly it’s an expansion that changes the core game to be able to accommodate the above, because if you take the opening paragraph as the basis for Diablo III character progression, adding a new Act would mean a necessary level cap increase in order to facilitate the minimum three times players would need to play through the entire campaign to reach Level 70.

When creating a new character in Reaper of Souls you’ll immediately notice that you can now select and change the difficulty of the game to suit your skill, with the harder difficulties rewarding you accordingly. There are now five difficulties in the game starting with the baseline Normal, going all the way up to Master. The final difficulty level Torment, becomes accessible after you reach Level 70 and features its own tiered monster difficulty slider. Each individual increase in difficulty not only adds to the experience you gain but also to the rate of item and gold drops, and in doing so makes it more fun and rewarding to play the game at its most challenging difficulty level. The game, even in beta, scales the difficulty remarkably well but whenever things get too tough you are still able to drop the difficulty at any point, an option that is a clear winner over forcing you to get better items before going any further.

By handing over the difficulty choice to the player this means that you can choose to play the game at a leisurely pace where monsters pose no real threat but are fun to dispatch one after another. Or you could play at a white-knuckled pace, with a screen full or coloured elite enemies, fire trails, ice explosions, and pools of deadly poison. The fact that this can be achieved at any character level is exciting, which makes the idea of starting a new character in a different class -- for veteran players especially -- an enticing proposition. This means that Reaper of Souls can provide a challenging experience right from Level 1. 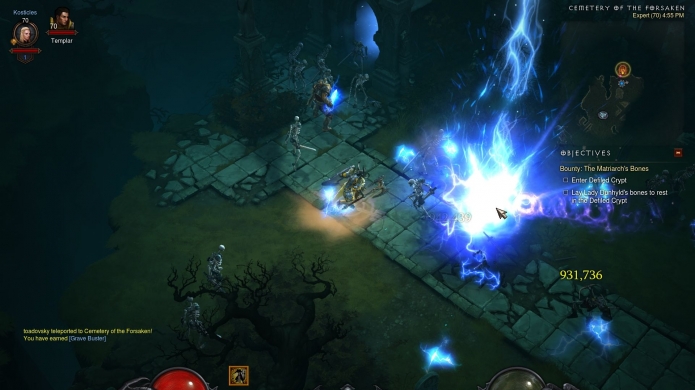 Playing through the campaign on the middle to higher difficulties with a new character means that by the time you reach the end of the newly introduced Act V, your character should already be sitting at around Level 60 or so. This is a fundamental change to the core Diablo III way of doing things, which upon first release ultimately followed a rigid linear path, full of repetition. And thanks to the linear difficulty progression it would have taken about three times as long to reach the same destination.

Reaching the level cap in Reaper of Souls is not a measure of playing the game at the highest difficulty level, as giving the player complete control over the difficulty is one half of the coin. Once the campaign is completed, at whatever level their character is at, at whatever difficulty level they are most comfortable with, players are able to continue playing in the new Adventure Mode – which effectively completes the transformation to a player-choice driven experience.

Explaining Adventure Mode at its most basic level is simple, and in following the path taken with the changes made to the difficulty progression it simply applies this methodology to the campaign. In Adventure Mode you can travel to any waypoint, regardless of location or what Act it is located in, at any time. Thanks to the introduction of fantastically hand-drawn maps, the process is exceedingly simple, and opens up the entire game to the player allowing them to explore the game-world in any order they see fit. But of course having the entire game to travel across and replay in any order leaves room for some structure, which is where the new Bounty system comes into play. 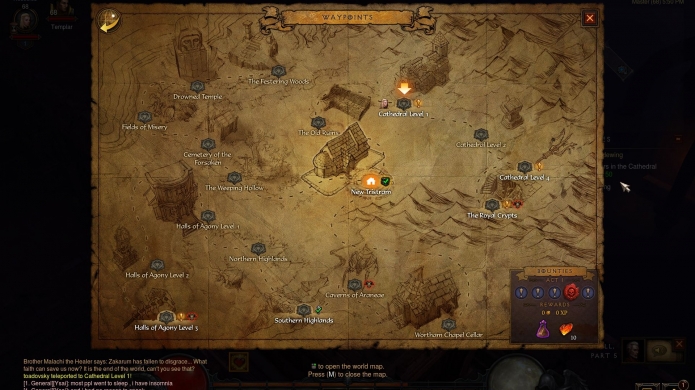 Replacing the need for quests in Adventure Mode, each Act now contains a random set of five bounties players will need to complete. A Bounty equates to a task being as simple as replaying a quest or defeating various bosses as seen in the campaign to the more involved efforts of having to clear out certain dungeons or hunt down and defeat rarer champions. Once all five bounties within a certain Act are completed you are rewarded with a bag that once opened erupts with a geyser’s worth of items, gold, crafting material, and gems. Completing bounties in a particular Act will need to be done in a single session in order to claim this prize and doing so takes about an hour or so depending on the difficulty and pace you choose to play. The game will also provide additional bounty rewards randomly, ensuring that players traverse across all the game’s locations.

Also included as a reward is a rift key which can be used to open a one-time randomly generated dungeon, called a Nephalem Rift that serves as an expansive loot run. These Nephalem Rifts take about 20 or so minutes to complete but are chock full of action, mixing more varied monster types together and even having their very own shrines that can make your character feel like a superhero. Being randomly generated and focused on pure action makes them feel like the game’s equivalent of a time trial mode, where speed, power, and agility are key.

Of course aside from Adventure Mode you can also choose to play through the campaign again at any difficulty you wish, making the road to Level 70, a fun and varied experience. Reaper of Souls seems to be clear in its mission to ensure that the journey becomes not only more important than the destination, but the entire focus. Once you do reach Level 70, the additions of the highest (and tiered) difficulty level, Torment, and the introduction of an expanded, unlimited, and account-wide Paragon system means that players are able to always move forward and in any direction. The end result is a drastically different experience than the one from 2012, regardless of the inclusion of a new Act and character class. And we’ll get to those, minor additions, next time.

Click here for a look at a handful of Beta screens Kosta took to accommodate this diary entry.

Recent articles by Kosta:Find him or follow him on Twitter - @toadovsky, Steam - toadovsky and Xbox Live - Toadovsky.
Read more about Diablo 3: Reaper of Souls on the game page - we've got the latest news, screenshots, videos, and more!
Tweet