Overwatch 2 is launching this October, and with a big reveal stream showcasing what's in store, we break it all down...
Overwatch 2 - Everything You Need To Know
Diablo 3: Reaper of Souls Closed Beta Diary - Looting Loot 2.0
Post by KostaAndreadis @ 11:35am 06/01/14 | Comments
AusGamers' Kosta "Toadovsky" Andreadis is currently running the Diablo III: Reaper of Souls closed beta through its paces and will be supplying us with a diary of his experiences every few weeks. Read on for his first entry on the much touted "Loot 2.0"...


When Diablo 3 was released in mid-2012, a legendary item drop was an extremely rare occurrence. Getting one of these deep orange coloured items to actually be any good or suited to your character was even rarer. Blizzard actually went on record at the time to state that these items were never meant to be the best in the game, which made them more like vanity items, which was pretty weird, in the sense that it made none.

This was subsequently changed for obvious reasons, and fixed in a patch that made these items not only appear ever-so-slightly more often, but also made them worth equipping in the first place. They were still rare but now they were also highly sought after. Reaper of Souls -- the first expansion to Diablo III -- which naturally adds a new Act that continues the story, a new character class, expanded crafting, and so forth, also fundamentally changes the entire loot system. Called Loot 2.0 by Blizzard, this new loot system more than lives up to its namesake as it’s pretty much a complete overhaul.

For those familiar with the game, at the end of each Act you know that you’ll come face to face with the end boss for that chapter and battle it out in a substantial arena -- one that’s usually engulfed in flames. These battles (on the higher difficulty levels especially) take a bit of time and endurance to get through, and previously the rewards would be a few yellow items for your trouble. The yellow, or rare items, in Diablo III are the ones that you need to identify, meaning their stats would be randomly generated (based on a set of many rules, factors, etc.), with the outcome usually being something usually not suited to your character. In Reaper of Souls, slaying the Act I boss ‘The Butcher’ will always drop a legendary item in addition to a few yellow rare items whose stats are now pre-set. That’s right, a legendary item after a boss fight.

This is logical, if you fight a huge boss-type character in an action RPG you expect good items to drop after they’re defeated. At the time of release, Diablo III did not follow this simple logic, and it’s hard to say exactly why -- perhaps it had something to do with the whole auction house thing. You know, the place where you had to periodically go to use in-game gold to buy better items because the drops in the game were rarely better than ‘suitable’ and the drop rates were in fact tied to the auction house itself. Because you chose to play the game for fun as opposed to ‘farming elites for loot’, the game punished you accordingly. Having a legendary item drop after fighting a boss is a huge fundamental shift for Diablo III because it shifts the focus directly to the player, in the moment, rewarding them for their effort. Make no mistake, Diablo III was a fantastic game at launch (server woes aside) but the new Loot system seems to be built entirely around not just providing players fun and challenging moments but also rewarding them consistently and regularly.

It almost makes you mad in a way, whilst at the same time feeling like an embarrassment of riches. You don’t need to read patch notes and feature lists before playing because you’ll pick up on the differences almost immediately. The changes are anything but subtle. Item drops in general will not occur as often but when they do, they’ll usually be of some worth. Items that do drop will more often than not, not only be suited to your character class, but also your build. Stats on the items have also been expanded and are usually tied to one of your character class’s skills. No longer will your Wizard’s inventory be chock full of Demon Hunter bows and other nonsense. Legendary items, especially, follow this route as they’ll usually be significantly better than your currently equipped counterpart, and feel almost tailor made for your character. The entire methodology of the new loot system makes the auction house feel like an obstruction at best and a complete detriment at worst. And it’s no wonder they’re shutting the thing down, and for that fact alone you have to hand it to Blizzard, who most likely had the best of intentions at heart when the game launched in 2012. Bottom line though: the system was broken, and now they’ve fixed it. 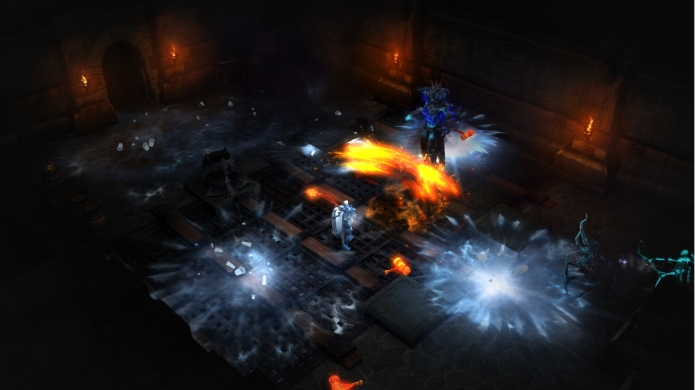 Without the auction house to spend all your gold on new items means that some other fundamental aspects need to change outside of making loot drops feel like something out of a dream. First up is upgrading the in-game merchants from a useless collection of pixels that are used strictly for selling items for gold, to actual merchants, meaning they sell weapons, armour, plans, and other items that are useful. Second is an overhaul to the crafting system, by making it worthwhile. This means that crafting components will drop pretty regularly to make better use of the blacksmith and any item plans you may come across. But this isn’t a case of just making everything easier and more abundant, as both item and gem creation has been expanded upon and made a lot more difficult to create the higher level gear or gems.

Loot 2.0 is a big change to the core Diablo gameplay, as even the item stats have been overhauled (again) to take into account the more sought after higher level attributes like Life On Hit, Life On Kill, Critical Damage, and so forth. Item comparisons are now divided into three groups, damage, toughness, and healing which take into account a larger variety of attributes. These big changes made across the board work wonders into instilling new life into a game that was feeling more than a little stale of late, as well as probably winning over players who gave up on the game pretty early on. Even with improved item drops and legendary items that you’ll actually get to see and use, sometimes it’s even the little things that can make you take notice. Health potions are no longer tiered and now come in a single variety called just that, health potions, which heal your character for 60% of their life. You also no longer have to pick them up, as they’re now automatically acquired like gold.

But perhaps the best part about the new loot system is that it puts the focus on item trading back between individual players, the way that it should be. Now of course still being in beta things aren’t exactly perfect as some mini-bosses and elites on occasion drop absolutely nothing, and more than once a legendary item was obtained by looting one of the random corpses that you come across, which felt weird the first time and more than iffy the second. You could even argue that the system is currently a little too generous and dropping too many good items, especially at the higher levels. But these are balancing issues that are no doubt still being ironed out. And as it’s a somewhat profound step in the right direction for Blizzard we can overlook the fact that they’ll need to re-tie their shoelaces every few paces until they get the hang of it.

Recent articles by Kosta:Find him or follow him on Twitter - @toadovsky, Steam - toadovsky and Xbox Live - Toadovsky.
Read more about Diablo 3: Reaper of Souls on the game page - we've got the latest news, screenshots, videos, and more!
Tweet