The World Game is back, natch, so we go through all the big changes coming in EA’s FIFA 21.
FIFA 21 Preview - Inside the Big Gameplay Changes Coming
Digital Dreaming: Thanks to Next-Gen, the Optical Disc Lives On, and On
Post by KostaAndreadis @ 04:25pm 09/12/13 | Comments
Kosta Andreadis takes a look at how PS4 and Xbox One are hampering the complete domination of digital distribution, and why Triple-A game sizes will require the Blu-ray disc for the foreseeable future...


As we move ever closer to the digital distribution age -- that mythical time where the click of a button (one naturally featuring credit card information, address, birthdate and information on your favourite types of Italian food) means you can purchase the latest blockbuster game, film or musical property to consume instantly, in the highest definition possible, a proverbial speed-bump seems to have appeared on Australia’s information superhighway -- data. A big chunk of data, in fact, where next-gen games are concerned.

The biggest bump so far (and at launch, we might add) is the digital download of NBA 2K14 on Xbox One, in the form of 43 Gigabytes of what we have to assume is basketball now being played across a vast post-apocalyptic wasteland triple the size of Los Santos.

In reality NBA 2K14 is just another basketball game, a fantastic-looking basketball game at that, but one that would need six DVDs, 62 CDs or, going even further back, over 28,000 floppy disks just to fit on a retail shelf. It’s pretty amazing that the increase in capacity of our physical (data) storage mediums has seen an almost exponential growth in the last 20 or so years, and with floppy disks being a thing of the distant past NBA 2K14 has of course been released on a single, tightly packed Blu-ray disc. And it won’t be alone as other highly publicised next-gen releases like Call of Duty and Battlefield are also trying their very best to fill up the 50 Gigabytes worth of data available on the medium -- it’s in this format that most gamers will experience all the biggest blockbuster next-gen titles.

Taking a look at select launch titles for the Xbox One and PlayStation 4 we can see today’s hefty Blu-ray disc game sizes: 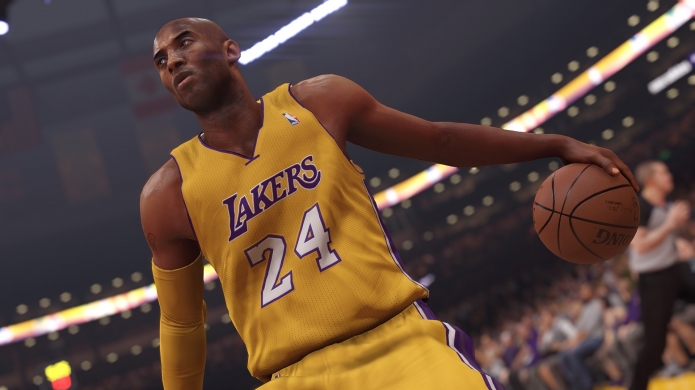 Visuals like this come at a hefty data cost, one our bandwidth struggles to afford

As the successor to the DVD, the Blu-ray disc is now the physical home for all high-definition film and gaming content. However, its importance in the digital age doesn’t feel anywhere near as close to that of the DVD, as it has steadily been overtaken by Internet speeds and cheap, affordable traditional disk-based storage where terabytes of data are slowly becoming standard. This in turn has led to (well in countries other than Australia at least) a steady rise in streaming and digital distribution as the preferred method for media consumption across film, television and music.

One of the largest streaming providers in the US, Netflix, recently passed 30 million paid subscribers, a figure which points clearly toward a digital distribution-focused future. Each of the above titles can, of course, be purchased entirely digitally and downloaded direct to their respective console, but their sheer sizes seem at odds with the recent digital surge.

A high-definition film, either streamed or distributed digitally over the Internet at 1080p, is done so using a fraction of the space utilised by the same film at the same resolution on a Blu-ray disc -- with a negligible loss in quality. We’re talking something going from 40GB down to 4GB, where at the high end of the scale HD movie files are being streamed at 2GB/hour and the bigger blockbuster games are taking upwards of 40GB of data. For gaming it seems the compression done before we’re able to download any game is minimal and comparative to the full Blu-ray disc installation size. This direct comparison may seem a little unfair as film and gaming are two distinct media entities but comparatively to film, digitally distributing gaming content could require up to ten times the bandwidth. And this is where, as they like to say, things get a little interesting.

With the gradual increase of broadband Internet in the late 90s to the staggering speeds and bandwidth possible today, a digital download of something the size of 43GB or even 39GB for the latest Call of Duty should be something feasible by most people living in, or around, major cities across Australia. Some download hounds out there sitting in front of a wall of screens with their own dedicated T1 line supplied by John Travolta sporting a soul patch will scoff at the paltry download size of 43GB, very much like Hugh Jackman from the hit movie Swordfish. But for the rest of us regular Joes with an average connection speed of 4.6MB/sec (and a global average download speed of 13.6MB/sec) it would take around about 10 - 24 hours to download each of the above games, with the catch being that any one of these single downloads would exceed the entire monthly average of data downloaded by the average Australian (the non-Hugh Jackmans).

Now, Australia itself has always posed a challenge to telecommunication providers over the years because of the huge distances not only between our own major cities, but also the major communication hubs across Asia, Europe, and America. With data travelling across cables that run across our very own continent and entire oceans, this means that an exponential increase not only in broadband speeds but in the size of the data itself means that any solution would be costly and by association heavily politicised. This is an issue for distributing high-definition content a tenth of the size of next-gen games, namely films, and with copyrighted material in play this means that the Blu-ray format is going to see a massive increase in market saturation. Thanks mainly to gaming.

This in and of itself is not a bad thing, as physical retail stores have been the major distribution point for media for a number of years now, even as technology advances at a pace that is borderline ridiculous. But when the DVD was released it was the preferred option for data storage and backup as well as media content, the same goes for the CD. In 2001 the average hard-disk drive (HDD) size for the regular consumer was about 40GB. In 2011, a mere 10 years later, this figure rose to 3TB. Today you can buy a USB stick for less than the price of a burger at one of those fast food burger joints that also sell salads you never see anyone eating, that can store a few DVDs worth of content on a thing the size of your thumbnail. Because of this the Blu-ray disc format just doesn’t seem all that relevant, until now. Not for sheer technological advancement but merely as the only real viable option for big budget games.

This is not an issue isolated to Australia, merely amplified here due to what some scientists have called “some seriously shitty ‘net, bro”. The proof can be seen in compression technology being developed where a video in the mythical 4K resolution can be streamed in a size comparative to that of a 1080p (or 2K) video. This means that optical disc technology may very well have hit the mass market wall with Blu-ray for this and many other reasons. The real question to ask is not whether or not a game like Battlefield 4 needs to be 33GB in size, it’s whether or not this is a case of developers not worrying about size, compression, and digital distribution all that much. Compressing game data brings with it more complexity than a single focal point like video or audio but even the console makers seem to be content in keeping the Blu-ray disc as the primary method of game storage for the next-generation.

Both the Xbox One and the PS4 come equipped with a 500GB hard drive, a size that is half of what you can find in a standard laptop being sold today. This means that even if you were to go the digital distribution only route on either console, you’d fill up half of the hard drive after only purchasing half a dozen games. With both consoles looking to become fixtures in many homes for at least the next six years this doesn’t feel at all like forward thinking, especially for the Xbox One whose selling points seem to be that it’s an all in one media machine that also happens to play games. The PS4, much like the PS3, features a replaceable hard drive, making it a far more viable digital machine than the Xbox One, but it only supports hard drives built on decades-old technology. It seems that although the biggest marketing push has been around digital content across either console, their flagship games are all going to be Blu-ray disc based affairs.

Conspiracy theorists out there might want to look to brick and mortar game and entertainment stores as the reasons behind each new console’s HDD size and the maintaining of the Blu-ray disc, and they could be right. The smoking gun is there, it’s just that there’s also a question of pure naivety in production and market saturation. Yes Australia is one of a handful of places that will suffer due to bandwidth, but market saturation in territories like ours aren’t likely a high priority when demand and early-adopters will prevail, regardless.

Perhaps the real winner in forcing the optical disc to survive the foreseeable future is the indie game scene. There will be a clear delineation between a big budget game release and an indie game: one will ship on a Blu-ray disc where the other will be purely digital and a fraction of the size. One is a sign of the future, the other is not. Indie games focused on digital distribution are aware of the bandwidth issues in trying to reach the widest possible audiences, and are sized comparatively.

In the next few years as digital distribution looks to make further inroads when it comes to film, music and television, but for those of you who love playing the latest big-budget, Triple-A games, perhaps it’s time to take a knee and shout ‘All hail the Blu-ray disc!’