We count down our 10 best games of 2020, a year for the sagas...
The Official AusGamers Top 10 Best Games of 2020!
Avenging Monsters - Hands-On with the PC and PS4 Versions of Diablo 3: Reaper of Souls
Post by Steve Farrelly @ 05:53pm 13/11/13 | Comments
We took both the PC and PS4 alpha builds of Diablo 3: Reaper of Souls for a spin at this year's BlizzCon. Read on for our full thoughts


BlizzCon 2013 gave way for me to get hands-on with both a PC and PS4 build of Blizzard’s first official expansion for Diablo III, Reaper of Souls. While I only managed around 15-minutes of play time on each platform, I made sure to check both of them out with expansion’s new class -- the Crusader.

The idea that the team wanted to put players into a walking tank has translated almost perfectly to the Crusader. The guy (or girl) is like an agile ball of metal shooting righteous globs of monster-destroying light out into the dark and brooding world that is Westmarch. Surprisingly, despite being a tank, the character still moves with some degree of speed and there appears to be a nice balance between up-close-and-personal melee confrontation, projectile attack deployment and area of effect crowd control. All of this coalesces into a strongly compelling character for the new expansion, whose background and physical aesthetics are also rightly on-the-nose for the themes and story coursing throughout Reaper of Souls. 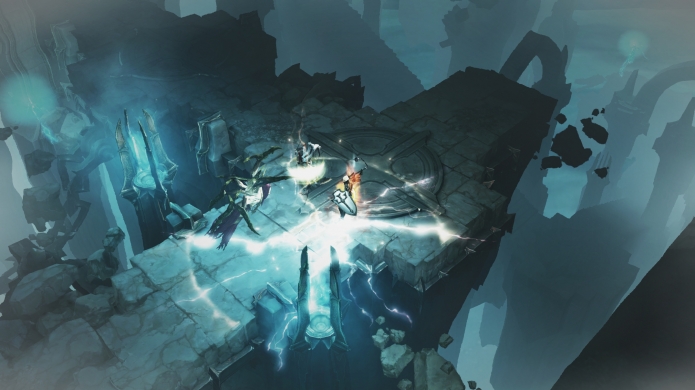 I didn’t get much of chance to learn more about the character, or his (or her) background, but I did take a look at one of the new features arriving with RoS, in the game’s Bounties. You get five within each act at the moment, and the five on show for Act One were all related to killing someone, such as “Kill Digger O’Dell” or “Kill Queen Araneae” -- on the PC build of the game, I went after the Araneae who is a giant spider. Her lair is also, naturally, filled with varying sizes of other spiders (the smaller ones gave me the most trouble), and it was here I got to really play with a few of the tactics available as the Crusader.

By and large, if you’re a Diablo fan, the Crusader will fit right at home in your ability to play. As mentioned above, they have options for range, crowd control and melee, and so after being overrun the first time through Queen Araneae’s lair by the aforementioned baby spider mob, I took to using the Crusader’s Fist of the Heavens attack, which eats up 30 wrath but also fills an immediate area with a perimeter of balls of light, each of which continues to attack enemies in range for a short amount of time. It’s more of a trap-based attack, but is also good for just slowing down mobs to give you some breathing room -- usually to let your Falling Sword cooldown complete, so you can drop the devastating move again to finish the job Fist of the Heavens started.

Stacking the Crusader’s bigger moves like this, along with his equally powerful shield melee thrusts and other shortform attacks makes for a fairly diverse character who’s also able to take some punishment. At the moment, there’s not much not to love about the prospect of rolling him when Reaper releases proper. After taking out the Queen in mini-boss style, she dropped a few blues and at least three decent yellows to look through. It’s by no means an indication loot 2.0 is all fixed, but it gave a very quick glimpse at the game’s more consistent and generous nature. 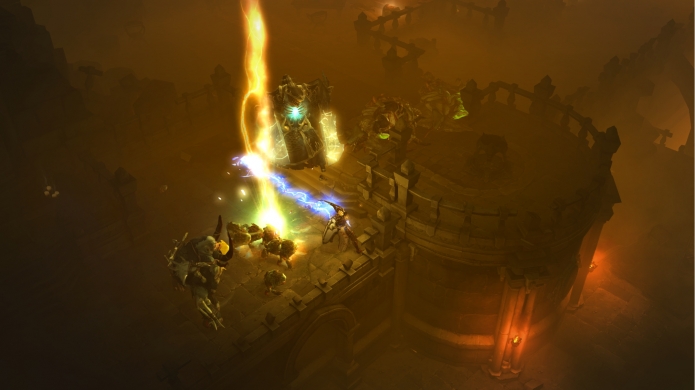 I tackled the Bounty on PC, but I have to tell you, the PS4 version looked better. Blizzard’s Matthew Berger told me that the console team’s lighting system has now been baked into the PC (indicating just how strong the console team is), but it didn’t really show on the PCs that were available. Obviously running at 1080p on a very big TV screen helped, and there’s no telling how old the monitors being used were, or if the settings were right, but it just looked very, very good on PlayStation 4.

If you’ve played the game at all on either current-gen machine, it essentially plays the same, and having the option to evade with the right stick is still far more natural in feel than anything the mouse and keyboard can offer. I didn’t really do a lot on the PS4 build though, except crawl through a few narrow streets. The game’s new setting is much darker in design and tone than Diablo III proper, though with such a short amount of time with the game, it’s still not a complete indication that this will remain consistent throughout. What needs to be said though, is even at an Alpha build stage on PS4, the game was running ridiculously smoothly. While I didn’t really get into the meat of the console offering, my chat with Matthew Berger did highlight three unique features on the console that might not be commonly known: Player Mail, Player Gifts and the extra awesome Avenger Kills.

My interview with Matthew is forthcoming, so there’ll be much more to learn when it’s live, but as a taste, Avenger Kills is a very unique system that sees you out and about adventuring before a monster kills you. But instead of focusing on your resurrection, let’s focus on that monster, because now, after killing you, he’s just leveled up. Now, after leveling up a portal appears and he jumps into that portal where he’ll choose someone from your Friends List who’s also playing Diablo III: Reaper of Souls and jump into their game. Your buddy is then going to learn that there’s a unique baddie in your game, and what’s even weirder, is your slayer has also taken on your name. So your friend has a strange monster, named after you, lurking their game. What’s more, is he’s not just randomly hanging out, he’s going to be actively hunting your friend. Now, if your friend manages to kill the monster, both of you get loot but if the monster named after you kills your friend, the process will repeat and it will level up even higher and gain even more power and go off and hunt someone from your friend’s Friends List. And again, this is unique to console. 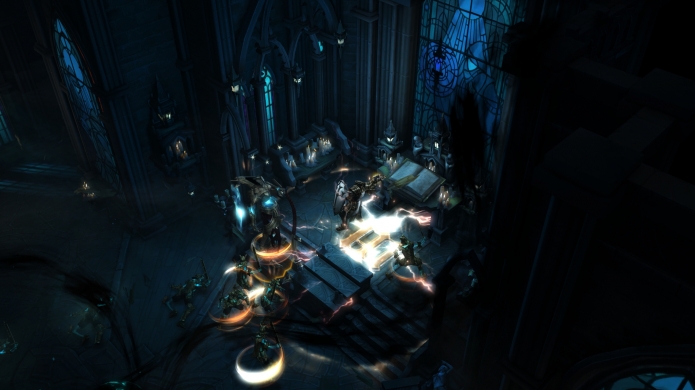 So in all honesty, as it stands, the game is looking spectacular on both platforms, but particularly so on PS4. It’s also far and away a step in the right direction from Diablo III where the team has not only listened to community feedback, they’re also looking at ways to strengthen and expand your gameplay experience. As mentioned above, I had a lengthy chat with Matthew Berger who is a senior level designer working primarily on the console release of Reaper of Souls, that reveals much more, but for now take away that the Crusader is badass, and the game is looking and feeling great across the board with unique attributes for each platform it’s being aimed at.

Read more about Diablo 3: Reaper of Souls on the game page - we've got the latest news, screenshots, videos, and more!
Tweet