A celebration of the long-running franchise and a great way to kick off Switch gaming in 2023.
Fire Emblem Engage Review - Strategy Gold
That's the Life for Me - Hands-On with Assassin's Creed 4: Black Flag
Post by Steve Farrelly @ 11:48am 30/08/13 | Comments
AusGamers went hands-on with a PS4 build of Assassin's Creed IV: Black Flag and took to both the high seas and the ocean floor, with all the climbing and parkour in between. Read on for our full thoughts...


Before I get to the meat of this hands-on, I'm going to plead with the Ubisoft demo-building teams to please, please think of those of us who play games correctly, and by correctly I mean inverted. It'd be a huge help in properly relaying the experience of your game.

Now, even with camera control issues on my part, I'm here to say that Black Flag feels excellent to play. There's definitely a more refined sense of control and movement where the naval portion of the game is concerned, and the areas I was most fearful of as far as player control, that being the dive bell sequences, are both fun and intuitive to navigate, and thoroughly terrifying for the impediments you'll inevitably face on the ocean floor. But more on that in a moment. First, the high seas.

While there was a naval portion of AC III, it represented a relatively small slice of the overall game. Here, it's safe to say, that hoisting sail will be one of the main activities you do. Steering feels less arcade-driven now though not at the detriment of fun and action, and as a result, your expanded arsenal aboard your ship offers more recourse for each encounter, and these can often have more than one ship involved.

You have firing options at every point of your ship, including the bow where you can drop explosive barrels into the sea to essentially plant temporary mines. Each side also has specialised firing options, but you also have what is essentially a mortar firing mechanism aimed through a telescope. Obviously because of the time period there's a relative delay on when you fire and when you reach your target, so it's imperative to maintain a sense of motion and movement, though most of this feels thoroughly natural given the watery play space in which you're engaging.

On board your ship you have all the usual options, such as heading into your own quarters where you can partake in a meta game managing your fleet (accrued over time in the game), change your look and more. The idea that your ship is not only your home, but essentially a moving hub throughout the game-world crafts an immediately intimate relationship with it, which is something not really seen in games before. You can buy upgrades and recruit new members, and even just use the thing as a parkour jungle gym.

Obviously with the upgrading side of things, money is a major factor in the game, and it can be picked up in numerous ways. Being a pirate means you can actually just come and take it, but as a growing assassin you can also accept contracts and this time there are variations that can reward you more money, such as killing a target with stealth while also not directly killing or engaging with anyone else who might surround him. It's a clever way for Ubisoft to push the expanded stealth element of the game, the details of which I'll get to shortly. 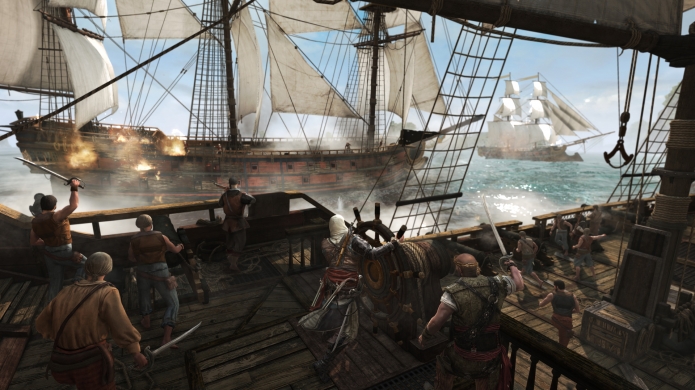 Emergent opportunities for money and even crafting also present themselves across the ocean. You can search for treasure via crudely drawn maps that are reminiscent of those found in Red Dead Redemption, or just stop by small islands that appear on your minimap the closer you get to them. While you're sailing you'll often also pass debris that might contain riches or materials and even sailors clinging to floating makeshift rafts. These poor adrift souls can be saved by hitting Circle (on PS4 -- the platform I played on), which is your default button for boarding, docking or engaging in most activities while on your ship.

Two of my favourite experiences overall, though, came by way of whaling (or shark fishing), and the earlier-mentioned dive bell exercises. Scanning the horizon through your telescope will often reveal circles of seagulls which means there's an animal to hunt. I didn't come across the apparently infamous sperm whale (where you can live out a digital Moby Dick moment), but I did give a bull shark a hard time. In any other real-life space I find shark fishing abhorrent, but this is a videogame, and one set in an age where overfishing was barely a concept (they also didn't just use fins and throw the rest away like today's arseholes, but I digress).

Taking up the challenge, you board a small rowboat and take station at the stern. Shirt off and glistening in the sun, Kendrick is a picture of life on the sea as a pirate. You take a harpoon in hand and wait for an opportunity to strike the shark. Once he's hit, he'll tow the boat Jaws style for a bit before tiring, though during this whole affair you can offload harpoons at the animal to try and kill it as quickly as possible. If you miss too many times though not only do you risk running out of harpoons, but the shark will turn and attack the boat, either by ramming it or breaching to eat you. The whole affair is intense, and apparently just a spot on what it's like to take down a whale. I can only hope they throw a giant squid Easter egg in there as well. 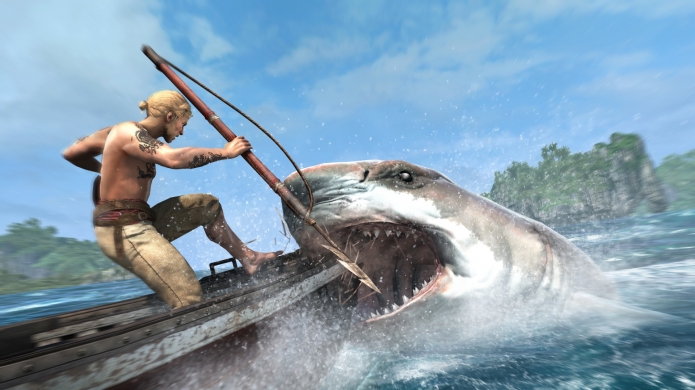 In the dive bell sequences, where you explore sunken vessels and swim freely in the ocean, it's nature's turn to bite back. Not only are you always racing against your own breathless clock, but you need to be wary of sharks, moray eels, sea urchins and more. The amount of times I freaked out after being nipped by a shark or attacked up close and personal by a camouflaged eel was ridiculous. I barely found all the treasure, and escaped back to my ship with only one bar of health and was seconds away from being out of breath. Your crew drop barrels of air pockets into the area for you, but only an agile player will navigate these areas safely, and there's a hope on my part that they become more complex and dangerous the further into the game you get. Suffice to say though, without being able to play inverted, I was practically dead in the water.

Finally, the promised stealth revelations come more in the idea that it's contextual. So leading Kendrick to grassy areas or bush and shrubbery will have him automatically go into a crouched stealth mode. From here you can use your blowgun to dart enemies without a sound and there are varying dart options for you, such as an instant death poison or one that will send the target into a rage, attacking his friends and making life easier for you on the whole. Naturally sneaking up behind anyone still allows you to perform a stealth kill, but it's the little things that matter. Kendrick will don his assassin's hood when he's entering a hostile area or is on the run, but out of these he proudly removes it revealing his face to everyone -- he is a pirate after all.

The juxtaposition to the above is that he's also somewhat brutish, and isn't afraid to get his hands dirty -- be it fist fighting outside taverns, or catching the eye of attached ladies, on account of his good looks. People complained about Connor's character in AC III, but here it's looking like the stoic nature of the assassin will give way to a freebird of the time and era. A pirate at heart, whose life literally is swinging brazenly into action when it invitingly calls, even if it isn't duty. How the team approach Kendrick's ascension to master assassin beyond his rich, bountiful life as a rogue should be an interesting journey indeed, and I can’t wait to properly experience the game’s marriage between open-world freedom and a newly-crafted Assassin’s Creed tale.