A celebration of the long-running franchise and a great way to kick off Switch gaming in 2023.
Fire Emblem Engage Review - Strategy Gold
Survival of the Naughtiest: Hands-On with Naughty Dog's The Last of Us
Post by Gameboffin @ 12:53pm 20/05/13 | Comments
AusGamers' Dylan "GameBoffin" Burns takes to the wasted, dangerous streets of Naughty Dog's The Last of Us. Read on for his full hands-on report...


“In a couple of days from now, we’ll probably be dead anyway.”

The acceptance of inevitability in Joel’s tone as he says this adds a distinctly grave weight to the scene. Ellie, a strong young woman who is half ward and half dependable sidekick, is within earshot, yet Joel does not save her the pure truth. She is born of this world, one that is in a state of post-civilised decay. The demo starts the story part way through, so we don’t know the exact details of their survival and relationship. Nor do we know why there are zombie-like fungus monsters that will kill you instantly if they get close enough. Only survival matters.

Ellie comes across as strong and mature; a capable videogame companion in much the same vein as that other recent female shadow, Elizabeth. As in BioShock Infinite, Ellie acts as both companion and commentator. She will constantly assure you to move ahead, that she is doing fine. She remarks on noises and sights, seeming to balance perfectly between world-weary toughness and teenage innocence. When Ellie uses profanity, it’s confronting but appropriate. She may appear streetwise and tough, but Joel’s casual admittance of their dire predicament hangs in the air uncomfortably. 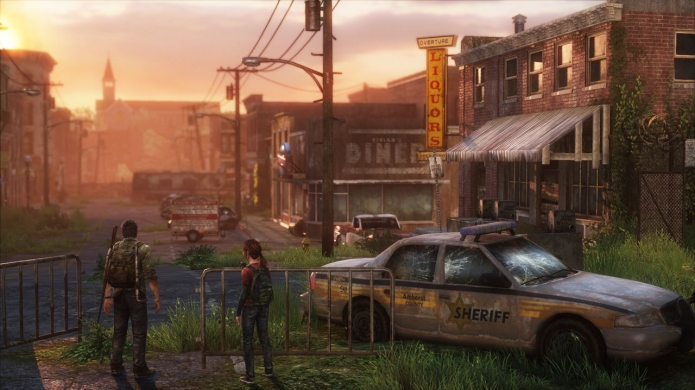 The Last of Us demo is surprisingly devoid of Naughty Dog’s almost patented climbing acrobatics. This is not, from what we’ve played of it, Uncharted with monsters. That said, DNA of that massive series is evident in much of the experience. Incidental dialogue is thick and constant, with Joel and Ellie always slinging words back and forth -- a random swarm of butterflies here, flipping through records in an abandoned music store and vocalising a rough music beat there. This is a smart mechanic, as it fills the slower pace of the game’s careful exploration and informs the player of objectives. There are no hanging arrows pointing to your next objective, just Joel’s verbal directions to reach a bridge or particular building, combined with the optional clicking-in of L3 to zoom in on them, which is more than enough. Both the player and Ellie must trust in Joel’s knowledge of each area. There’s also smart level design at work, which funnels you through city streets to the next area smoothly.

I played two scenarios in my hands-on time, one mostly exploratory and the other focused on combat. The first, Lincoln, sees Joel and Ellie approach town from the outskirts, wandering through verdant hinterland before coming up against a couple of environmental puzzles. Don’t get too excited, though, as this is far from complicated -- a simple wooden plank needs to be moved to rest against a low building so that you can pull it up to the roof and lay it down to cross a gap. This type of puzzle, with ladders swapped for planks, appears later on as well. Hopefully there will be more complex interactions in the full offering. Could it be that Naughty Dog is slightly stumped when it comes to a character bereft of Nathan Drake’s superhuman climbing capabilities?

Once over the fence, it’s time to explore a handful of open buildings. The Last of Us presents derelict cities in excruciating detail. Weeds have taken over and cars sit abandoned and useless. Boarded up windows are as ubiquitous as cracked pavement. Everywhere there are ghosts of stories regarding what happened -- a safe resting next to a truck or a diner door hanging open. Only certain parts of the city are able to be explored. Interiors are heavily detailed and realistic, creating a sense of loss as you rummage through people’s homes and businesses. 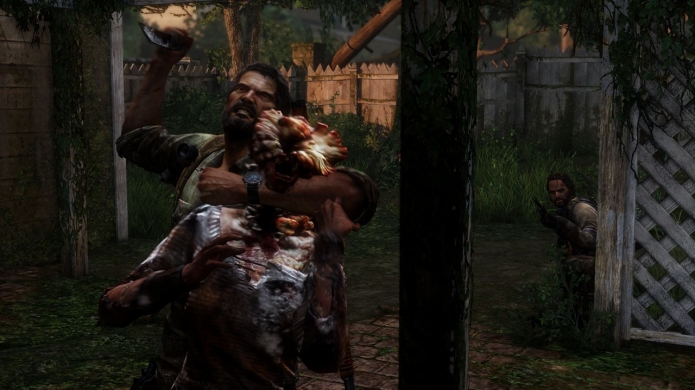 That this is a linear adventure with a small measure of elasticity is starkly apparent. The Last of Us is also a lot slower paced than you might expect, relying on the systematic looting of all that you can see. Desk drawers offer up spare bullets, office pidgeon holes tape and scissors, while all manner of scrap can be found just lying around. At any point, you can use collected materials to fashion health packs, shivs and upgrade melee weapons. I found a particularly nasty looking pipe with a pair of scissors taped to the end. You can only carry one melee weapon at a time and they degrade as you use them.

It’s here, in a small building courtyard, that I encounter my first monster, some kind of infected human. Not expecting such a deadly surprise in such a calm environment, the clicking, mushroom-headed half-human that I stumble into scares the crap out of me! If you listen carefully, though, you’ll hear them before you see them, at which time it’s advisable to go into crouched stealth mode. There’s also the option to enter a kind of ‘listening’ or ‘instinct’ mode by holding L2, which is a lot like Lara Croft’s similar ability in Tomb Raider. With this enacted, clickers and other close enemies appear outlined in the environment.

The infected take several gunshots to kill and this undoubtedly draws more to your position, so it’s much smarter to either avoid them completely or use thrown bottles and bricks to distract them with sound. You can sneak up on them and take them out silently, but this requires the use of a shiv, a resource that is also extra handy for prying open certain locked doors that usually contain a trove of resources. Ellie’s programming is amazing during tense encounters. You never have to worry about her as she shadows you easily, adapting to each situation’s context. The only time she threatens to appear artificial is if you turn suddenly and she takes a moment to move out the way or if you need to lead her back away from an explosive tripwire so that you can throw a brick to detonate it safely. Otherwise, you never have to worry about babysitting. 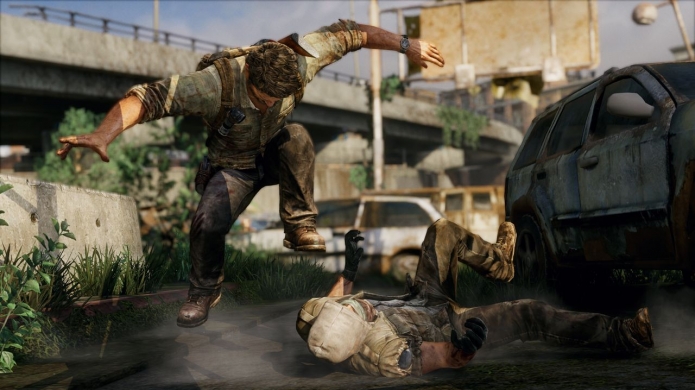 The infected enemies are fairly one-dimensional and come at you with animalistic directness. They’re not the only enemies out there, though. Human enemies are much more tenacious and just as deadly. The second scenario, Pittsburgh, sees Joel and Ellie pulled out of their vehicle by a group of survivors and very quickly engaged in a fight to the death. It’s here that a second side the game is shown and it becomes apparent that Joel and Ellie are an integral team, helping each other out in order to survive. There’s no button to stick to cover, just the option to crouch. Joel automatically adjusts to each situation smoothly, pushing up against cover and corners. This automation creates a heavily cinematic feel to your actions, almost like you’re playing a cut-scene. Rather than have to worry about pressing buttons, the player is brought into Joel as a character, his actions rarely at odds with what is wanted or needed.

The enemy AI in the second part of the demo is completely different. I was surprised several times by one of the survivors flanking me unseen and killing Joel with ease -- to Ellie’s strained cry of, “Watch out behind you!”. Bullets are in low supply but cover is everywhere and if you can break line of sight it’s possible to flank enemies and be in a much better position to attack. Somewhat stupidly, I threw caution to the wind and launched Joel at three bad guys in a row, fists swinging. Once more, Joel’s attacks are contextual and he’ll use the environment to deal out finishing moves if possible. It’s dangerous to be exposed for too long, however, and a few bullets are enough for you to die.

On reload, with guns equipped, it’s apparent that one feature has sadly been carried over from the Uncharted series: the awful aiming. It feels floaty and inaccurate and this equates to extremely frustrating encounters. Players wrestled with the shooting in Uncharted and ultimately forgave it because you always had a million bullets, but in such a tight game as The Last of Us, I’m not so certain that Naughty Dog can afford to put the player behind such an unreliable aiming system. Perhaps it is deliberate – maybe vulnerability is the desired effect, but there is a difference between feeling vulnerable and feeling unable to use the systems offered. 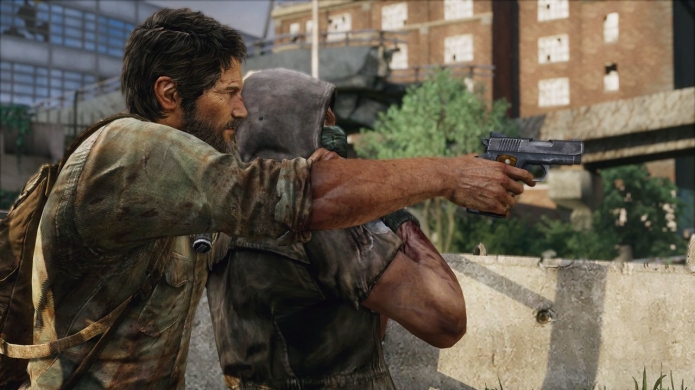 It doesn’t help that the game seems to have a weird kind of auto-aim, which only works sometimes, such as after a forced QTE whenever the lesser infected attack you. Actually, there were a lot of QTEs in general, so be prepared to mash buttons to lift doors and keep murderous weirdos from eating your face. During the short demo time I was greeted with several frustrating deaths due to the awkward aiming and/or waiting for Joel to reload at a crucial moment. Of course, this may be a result of being dropped in the middle of things, denied consecutive hours with the game in order to build up muscle memory. Hopefully the general combat will feel more natural as you become familiar with control idiosyncrasies.

From these two vertical slices of gameplay, The Last of Us has the potential to be an engaging and confronting experience. Gore, profanity, horror and a world stripped of euphemism take centre stage. The pacing feels almost at odds with its blockbuster intentions, happy to allow an entire city block to wait patiently for the survival-tuned rummaging of a wary player -- which is a nice change. When the action happens, it’s messy, stressful and urges you to run. Ellie has the potential to beat Elizabeth at her own game and be something more than a purveyor of spare ammo. It’s still unclear exactly where the story will focus, whether it’s simply a small story told in a big world or if Joel and Ellie will somehow be involved in finding a solution to the infection. Either way, the excitement heaped upon this title seems merited. Let’s just hope that Naughty Dog has a few more tricks up its sleeves beyond ladders and planks.

Read more about The Last of Us on the game page - we've got the latest news, screenshots, videos, and more!
Tweet

fryzeegunner
Posted 10:28pm 20/5/13
Commenting has been locked for this item.