Zen 4 ushers in a new era for AMD CPU performance when it comes to straight-up gaming.
AMD Ryzen 7600X Review - Gaming Excellence
Last Look Preview: Far Cry 3 Hands-On
Post by Steve Farrelly @ 01:04pm 24/10/12 | Comments
We take one Last Look at Far Cry 3 before its end-of-November release date (and our review). Read on for our thoughts...


Balance. It’s a fundamental component of game design that translates to fun. If a game has multiple systems, multiplayer, progressive character growth and combat, and it’s unbalanced in any of them, it’s just not going to be fun.

Interestingly, there’s also a point of balance between basic gameplay and story, and how the game handles offering both to the player. This is particularly difficult to do well when the gameplay platform you’re offering is of the open-world, sandbox kind and your story is a fundamentally driven, linear one. We’ve seen Rockstar do a decent job of this, separating the two in such a way that one is more a playground, while the other offers an interactive guided narrative. You could argue, however, that segregating both platforms as much as Rockstar does, is a detriment to the potential of a conducive marriage of both, which is something we see Bethesda handle with aplomb, exampled in both their recent epics, Fallout 3 and The Elder Scrolls V: Skyrim.

For their games, the player is the story creator; emergent gameplay being their pacing tool. The smallest side-quest in either game, can become a massive element to how you’ve built your overall experience. However, it could also be argued that with little-to-know major emphasis on a base storyline, Bethesda’s games miss something of an opportunity to tell a well-directed grandiose tale.

In recent times, I’d actually cite the Batman Arkham series as the best marriage of both, and one that finds balance in its delivery of a tightly driven story, with an open-world that utterly reflects what should be a confining narrative guideline, but remains as open as each game’s romping grounds.

For me, I’m hoping the latter is how Far Cry 3 delivers its experience. The first game was less story-driven, and instead stood as a tech testbed and showcase for Crytek, while the second had much more Ubisoft delivered to it, but lacked a sense of dynamism to keep players wanting to trounce through its thick jungles. And with that in mind, there’s no wonder punters and critics alike are trepidatious about Far Cry 3.

The annoying thing about this trepidation is everything we’ve seen of the game so far is tantalising, to say the least. I’ve actually had a chance to tackle it in hands-on form more than once, though the last two times were hardly proof that Ubisoft Montreal has found that magic story and open-world balance. One session was multiplayer-oriented -- something I’m not afraid to say is relatively paint-by-numbers as far as the limited amount of time I had with it is concerned, while the other simply dropped me in the middle of the tropical island with invisible walls set up some way away (I still had plenty of room to stretch my virtual legs) to basically just play with the game’s myriad systems. 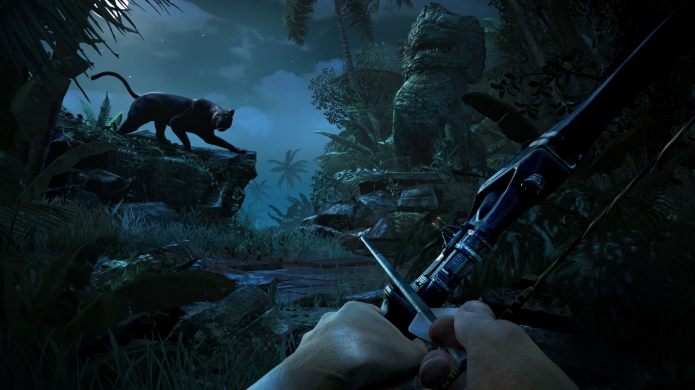 None of this, however, was conducive to story though, so it was with much anticipation I recently sat down with a rough build of the full code where I got to take it all on, right from the beginning. This also leaves me in a tough position, because as I mentioned prior, story is a massive draw for Far Cry 3 and anyone who regularly reads my work will know I fucking hate spoilers, but it’s important I point out that, from the word go, Far Cry 3 is a rollercoaster of a tale.

While I only tackled the game for roughly 90-minutes, I was delivered narrative and open-world in equal parts, and never felt that one overshadowed the other. Their marriage is a compelling one, though you never once feel like you’re required to follow the game’s own level-structure. It’s also invitingly overwhelming once you do have your freedom, and the whole game-map is open to you as soon as the intro leash is removed. However, freedom isn’t nearly as fun as you’d think, with the game actually crafting some devilish challenge spike to the further out from your comfort zone you tread. You could like it to an RPG open-world where you need to level up before hitting up certain areas, but in Far Cry 3, “levelling up” is more a tracking tool for your expanded ability trees, weapons and customisation and crafting.

The game’s intro takes only around 10-minutes before you’re set loose upon the island, but is quite jarring early on. What stood out for me throughout my whole 90-minutes was the sensation of initially being a stranger in a strange land. The team have done a fantastic job of extending your own alienation to a new product by way of character and story context. But even in the short time I played, I could feel a greater sense of confidence and acceptance spawning with my every interaction with the island.

However, this ever-expanding safety net is thoroughly juxtaposed with the psychotropic component of the game, which is often delivered to you by the spaced-out Dr Earnhardt. To further parallel Batman, if you played through the Scarecrow sequences in the first game, or the Ra’s Al Ghul trip in the second, you’re on the right path, only in Far Cry 3 the crazy here is amplified ten-fold. I only had the one trip, but it was a doozy, and honestly something I’ve never truly experienced in games before. It also lasted a decent amount of time and constantly had be agape and guessing. If Ubi has managed to pace these sequences out so they don’t become predictable or annoying, it could be one of the stand-out features of Far Cry 3.

In all, having gameplay context from the intro and into the meat has given me more trust that the team can deliver on their promises than all the broken previews of its many parts have throughout the year. It looks luscious (especially on PC), plays smoothly and, most importantly, offers up a so-far balanced gaming experience that has me invested in its story and game-world in equal parts. The sheer size and scope though, is still cause for concern as to whether they can maintain this level of consistency, but based on everything I’ve played and touched on, I’m ready to give Ubisoft Montreal the benefit of the doubt.
Read more about Far Cry 3 on the game page - we've got the latest news, screenshots, videos, and more!
Tweet