A celebration of the long-running franchise and a great way to kick off Switch gaming in 2023.
Fire Emblem Engage Review - Strategy Gold
StarCraft 2: Heart of the Swarm Hands-On Preview
Post by Steve Farrelly @ 05:13pm 26/06/12 | Comments
AusGamers went hands-on with some of the new multiplayer units for StarCraft II: Heart of the Swarm. Read on for our full thoughts...


In going into this hands-on, it’s highly important I mention I’m not a stellar StarCraft II player. I spend way too much time building resources and doing all the OCD/anal-retentive stuff that gets you swarmed by opponents who’ve macro’d absolutely everything in the game, and can play while sleeping. That’s why the single-player resonates with me much more, because unless it’s a timed mission, I can usually just grind away building resources to a point my army is so huge, it’s no competition when going after the baddies.

What makes all of the above interesting then, is at an MLG event that was held a day after E3 closed its doors, in Anaheim, California, I was given a chance to play the newly revealed StarCraft II: Heart of the Swarm multiplayer units and test-drive all the new features. For me, this was a massively daunting task, but it also was for my cohort and rival on this excursion, Joab Gilroy of GameArena, and so we only tackled each other in demo courses that were, well, timed. 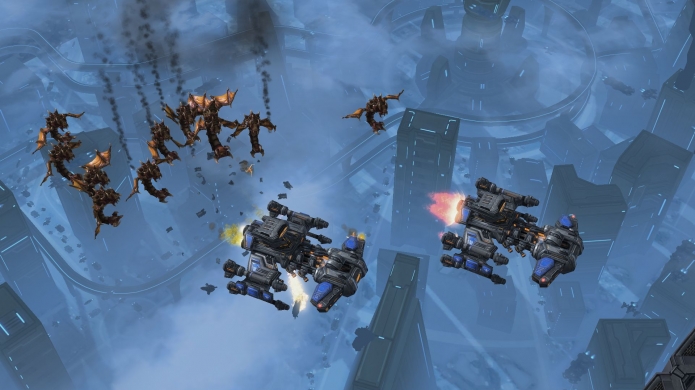 The beauty here was I had to quickly adapt my play-style while also making sure I dabbled in playing with the new units and all three races, but did so with what I feel was gusto. Joab and I never did actually beat each other, as we’d wind down the clock (we had 20-minutes) to what I believe is called a “stalemate”. Much to the chagrin of anyone else we told, it was still a great testing ground for both of us, and the new units actually made sense, even to nubs like us.

This is the point of this preview, because while it’s easier for the more core guys to get lost in their DPS, AoE, acronymous et al ways, even the likes of myself and Joab can get a taste of the more rounded units the team has crafted to further balance the game.

(Note: You can actually check out a more detailed description of the new units and abilities as officially supplied by Blizzard right here.)

Most of the new units have been added to help maintain a more even playing field for players, specifically in end-game scenarios. Units such as the Terran’s Widow Mines, who embed themselves in the ground and attach to anything that crosses their radius, not only dishing out 200 points of damage (each) at the time of playing, but also spilling out some handy splash-damage for good measure (these guys were my favourite new unit to play with), help in end-game rushes or large enemy raids because they’re cloaked when armed and don’t require a tech lab or armory to build. They are fairly disposable though, while other new units such as the Protoss Tempest, which has the largest range of anything in the game is a real grind to get off the ground. The cost to get these units up and running is huge, which balances out the fire-power and range they come with, allowing for greater recourse on the player’s part in regards to tactics in both offense and defense. 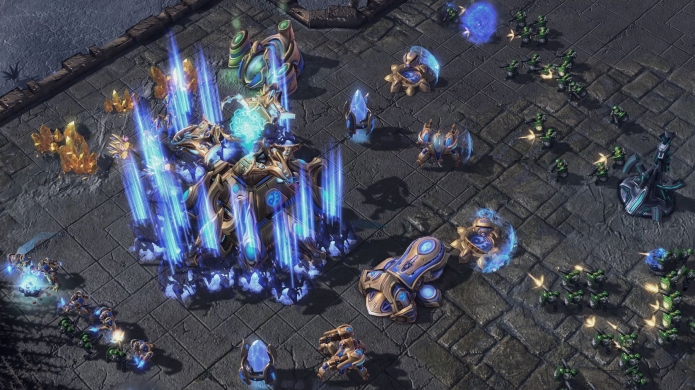 Interestingly absent from the hands-on portion of the game, and even from the trailer and press conference showing off the new units, was the ability to “creep spread”, a new Zerg ability, which lets you create something of a Zerg super-highway into opponent bases. The reason being is the team hasn’t managed to capture it from a visual standpoint yet, which proves how seriously they take every aspect of the game. Even the Widow Mines were using place-holder art just for the event. This obviously leaves us wondering how long it’s all going to take to come together for a release, and whether or not we’ll even see it this year, but in the wake of the aforementioned success, it can only be a good thing. As Blizzards says, “when it’s done, it’s done”.

It’s in smart decisions like these the team has really amped up the multiplayer offering, which was initially meant to be an entirely new game with Heart of the Swarm, as opposed to what you would describe as essentially an add-on now. But given the successful nature of StarCraft II’s multiplayer so far (just look at the growing popularity of BarCraft, for example), offering up the opportunity to allow players a chance to craft new or expanded strategies in a game whose balance has been being tweaked since release is probably more exciting than the prospect of having to learn everything over again. A new game would just irk the pros and annoy anyone finally getting their head around the myriad styles of play across all three races.

On the Zerg front, the major stand-out unit for me, in terms of new usage, was the Viper who can actually yank units out of a skirmish, at a range of nine, and bring them to its feet (or would that be tentacles or roots or claws?) and, usually, their ultimate demise. It can also let loose a cloud that will severely limit the visual range of any biological units to just one, making it an immensely scary addition to the Zerg. 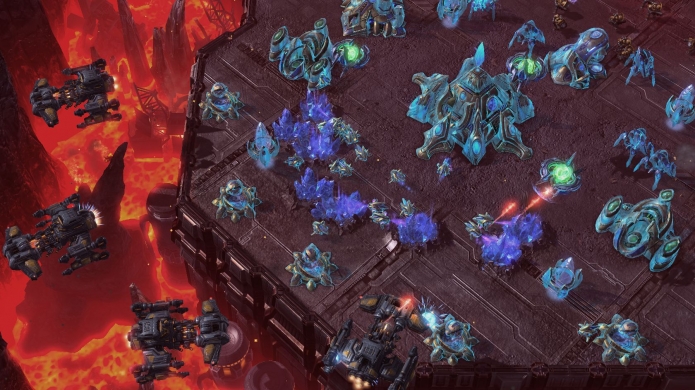 Obviously there were a lot more units added to the fray, though using them was difficult at times given how hamfisted I am with the multiplayer side of things, and it’ll be the beta rounds that truly spark a response to the new units, but on the plus it’s just great to see more additions than subtractions overall, and specifically, a handful of units across all three races that make me want to actually get in and test my mettle online. There has also been a number of changes made to Battle.net, which I go into in a forthcoming video interview with Blizzard’s Alan Dabiri, so be sure to stay tuned for that one coming soon.

Blizzard’s Dustin Browder (StarCraft II: Heart of the Swarm Game Director) made a very strong point that all of this was still a work in progress, and that anything could change at any time, but I’m hoping they don’t. Even though my deeper understanding of it all is lacking, on the surface and with just three 20-minute rounds I felt the game was more balanced and much more exciting from a multiplayer perspective. And it’ll be great to see how the pros start tackling the new units and countering the various new strategies that will obviously be employed as a result.

Stay tuned for more on the second expansion to StarCraft II, right here on AusGamers.
Read more about StarCraft 2: Heart of the Swarm on the game page - we've got the latest news, screenshots, videos, and more!
Tweet