A celebration of the long-running franchise and a great way to kick off Switch gaming in 2023.
Fire Emblem Engage Review - Strategy Gold
Confrontation Hands-On Preview
Post by Eorl @ 10:08am 20/03/12 | Comments
AusGamers went hands-on with the tutorial and first two levels of Confrontation and walked away excited about the forthcoming RTS/RPG mixture. Read on for our full thoughts...


The role-playing genre in videogames has slowly transformed over time, moving away from the traditional D&D pen and paper systems and the board-game-esque tactical Fallout or Wasteland styles to a more action orientated gameplay like The Witcher 2 or the Dragon Age series -- which was supposed to be a throwback to old school dice-rolling RPGs.

However not all developers are fixated on newer pastures, which isn't such a bad thing when there is definitely a big enough niche of gamers out there salivating at the idea of a new tactical RPG that really offers a old-school feel. This is where Cyanide Studios comes in, the developers who are currently working on a new RPG titled Confrontation, which promises to bring back the tactical style that many have walked away from.

Confrontation is based on the universe of the board game of the same name by Rakham, and focuses on intense and tactical battles, as well as mixing in well formed mechanics from other RPGs. What we get is a tactical-based RPG that relies heavily on the old Dungeons and Dragons style, with several types of characters to control and a rich and extravagant background of story. The art style has a very Warhammer 40k feel, with the inclusion of science, fantasy and role-playing all rolled into one. 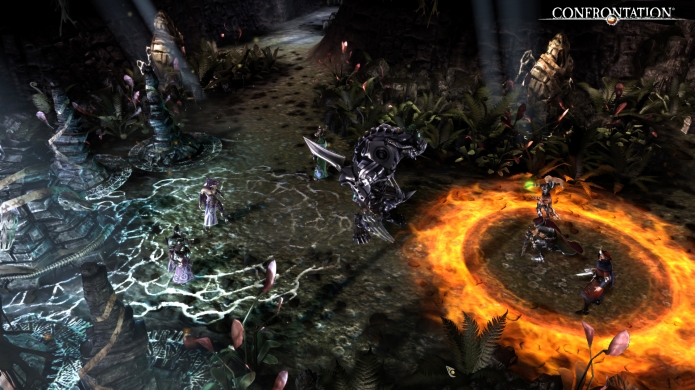 Our preview experience consisted of two early scenarios from the game and the tutorial sequence. Kicking off the campaign, you’re greeted with some background into the world of Aarklash, and witness Rag'narok, the dramatically apocalyptic end of the world as you will. This is where you come into play, with you group of rag-tag heroes ready to fight back for your world, and clearly eager to stop this party of doom and gloom.

The campaign takes place through your standard RTS viewpoint, allowing overhead camera movement to control the area of view and the levels we played were presented with linear based missions but also offered opportunities to explore for any side loot or enemy patrols. As is often the case of such a conjoined story however, the heroes used throughout are locked into their skills, and how they strengthen their gear. This isn't necessarily a bad thing, but more a side-effect of the RPG components, and has the added bonus of allowing player-tailored customisation.

It's apparent early on in the campaign that being tactical is advised, and if you choose to simply rush into battle without a plan, death is swift and painful. Utilising your hero’s abilities allows the manipulation of battle and with the power to pause gameplay and plan ahead, it really gives that tabletop feel to the game. Cyanide have done well in rolling together the two genres, and haven’t made one more dominant than the other. Confrontation often gives off a feeling similar to Baldur's Gate or even the behemoth MMO, World of Warcraft.

Your heroes fill out four different roles – the tank, close encounters DPS, ranged unit and a healer/buffer – each role vital to surviving. With each role depending on one another, any form of single-file marching in is quite suicidal. 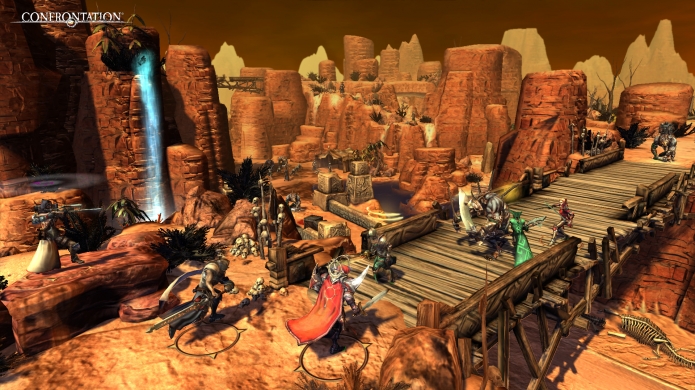 Confrontation also sports a strong character customisation element, which is where the RPG elements shine through. Each hero is given a character sheet comprising of attributes, abilities, weapon skill tree and armour skill tree, allowing for a more diverse playing style. Also available to players are glyphs, which can be used to give permanent boosts to your armour and weapon slots, so you're unlikely to share the exact same loadout as anyone else. The unit customisation offers further variety with the Army Painter, a visual tool to distinguish your enemies and friends, that even let’s you paint your characters bright pink if you truly want to.

While the game won’t be winning any awards for its graphics, if you can look past the small annoyances, there’s a compelling RPG narrative with a solid RTS feel to be experienced. Cyanide have done well drawing from the board game origins, and in it's current form it feels like a solid title. This was but a small taste of the game and we’re yet to check out mulitplayer, but so far, Confrontation is showing the potential to be a unique and enjoyable game.

Read more about Confrontation on the game page - we've got the latest news, screenshots, videos, and more!
Tweet