Shadowlands is set to get its first major content drop, we chat to Blizzard about what's in store and telling stories in the afterlife.
World of Warcraft Shadowlands Unleash the Chains of Domination
Medal of Honor: Warfighter GDC Impressions
Post by Steve Farrelly @ 01:35pm 12/03/12 | Comments
AusGamers was out at a special unveiling event in San Francisco for Medal of Honor: Warfighter. Read on for our analysis of what went down...


During the same week last year, I was privy to a new game engine and a new entry in the Battlefield series from DICE. Battlefield 3, running off their newly crafted Frostbite 2.0 game engine, and being demoed solely on the PC, a practically unheard-of action for a cross-platform title in this day and age, blew us all away. The end results obviously speak for themselves, and with a 9.8 on AusGamers and an all-round 89 Metacritic rating (on PC), much of which is attributed to its visual breakthrough, DICE’s investment seems to have paid off.

Not too long after BF3 released though, we were also given Need For Speed: The Run - the latest entry in the long-standing series, but most notably, the next major franchise in EA’s stable to utilise DICE’s new engine, and all the better for it. We won’t get into the nitty about the gameplay content of that game, because frankly, it’s not relevant. But it did look very nice, and showed off variations the engine could pull off we hadn’t seen in Battlefield - specifically in the lighting department, and equally at the hands of another developer - Black Box. 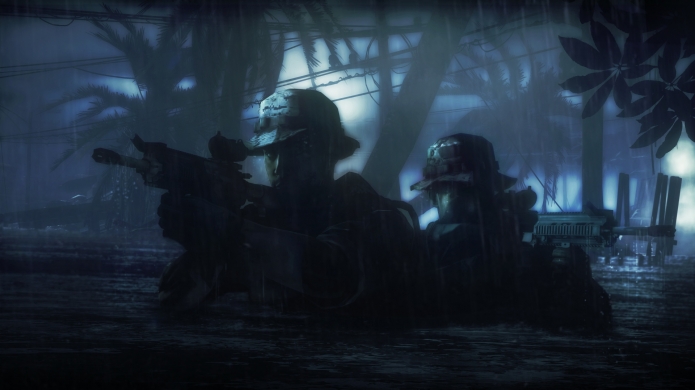 Now, back up to August last year at GamesCom where I asked DICE’s Karl-Magnus Troedsson whether or not he could foresee that, with the inclusion of NFS: The Run, EA would start using Frostbite 2.0 for all major EA franchises moving forward.

“Well, DICE has been committed to building our own engines for a long time. You know, if you go back to [Battlefield] 1942 and Battlefield 2 and these kind of things,” he told us. “So we have a very long heritage of knowing how both compelling it can be to get new technology -- because you can go and do new things -- but also how painful it can be to actually go through a generation change of your technology.

“The thing that has helped us out when it comes to other teams within EA actually using this engine as well, is that we have a separate Frostbite 2.0 team that’s now dedicated to actually support not only Battlefield 3 but also Need for Speed: The Run. So it’s been both a technical challenge, but also like a communication challenge and how do you make sure that several teams get more support with it.”

On the topic of who else would be using it though, Karl spin-bowled his way out of giving much hope to the engine being used beyond the aforementioned games, adding that DICE is “super happy that more people want to use our engine”, but that they are “not planning on putting it any further out than that”. He concluded with a promise that Frostbite 2.0 is “not an engine that we plan to license out or do anything like that [with]”.

Which bring us full-circle a year later, and Danger Close, developer of the Medal of Honor franchise, are finally going to reveal -- in full -- their sequel to last year’s reboot, not so oddly enough running off Frostbite 2.0 and being shown to the gaming media running on PC only, once again. The event actually kicks off with some info on the upcoming “expansions” for Battlefield 3, but kicks very quickly into high-gear with the Medal of Honor: Warfighter demo.

The interesting thing about last year’s battle of the modern conflict games between Battlefield 3 and Call of Duty: Modern Warfare 3 is that both competitors are actually quite different, and at times it almost seemed silly that they were being pushed up against each other. Battlefield has always been about epic, large-scale multiplayer battle with vehicles, destruction and a greater sense of teamwork. Call of Duty, on the other hand, has always bolstered a decent, action-packed blockbuster single-player story with a run-and-gun multiplayer component built around smaller maps, no vehicles (World at War aside) and a more drop-in, drop-out ethos (and yes, I know there are more in-depth options, but bear with me here).

So the first thing that leapt out at me when we were prefaced a live demo of Medal of Honor: Warfighter with a talk to actual ex-Tier 1 operatives who’d helped craft the game’s narrative, is that if any modern conflict title should be made to go up against Activision’s behemoth, it should be Medal of Honor (the irony of this being that Infinity Ward was actually built as a result of MoH dev teammembers who weren't happy with EA’s then direction of the franchise, and so went to Activision and made Call of Duty. But I digress...). 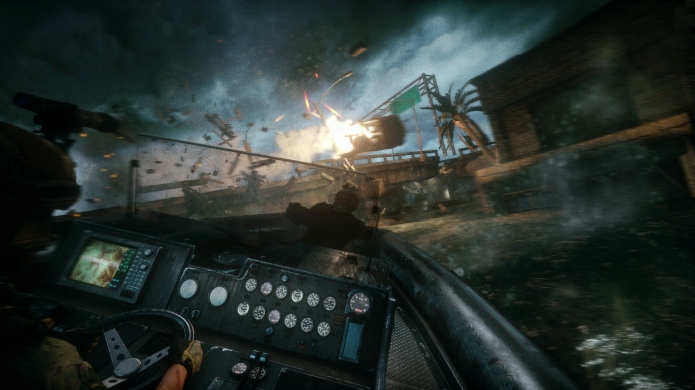 All of this was confirmed during the demo though, which looked and played like a heavily scripted sequence from the CoD franchise (this isn’t a bad thing in my books), though obviously on a visual scale unparalleled by that franchise. The 10-minute or so live gameplay portion took a team of operatives into the Philippines to rescue a hostage being held in a typhoon-ravaged hotel of opulent design. Rain and storm billow outside as we see our rescuers emerge from a body of water in what appears to actually be the hotel’s lobby. The stand-out component here is colour. Battlefield 3 carried with it a particular hue and saturation that helped carry over the story, and resonate the game’s locational base, here the same can be said of Warfighter, only with a bit more “pop”.

It’s not long before this introduction to these operative ghosts though, that the shit hits the fan and we see familiar mechanics come into play. AI teammates back your play as enemies descend upon you and your team, taking cover and lobbing all manner of grenades at you, alongside sure-fire lead to boot. More stand-out features emerge here though, in the form of destructible parts of the environment accompanied by a heady amount of dynamic debris and drama-adding particle effects. The physics involved here are also top-notch with the aforementioned water adding to the chaos with dynamic splashes and waves, while explosion fallout shakes and moves anything unbound, sending it flying about the player space. As the dust settles and the bad-guys die, overhead a chandelier rocks to and fro, dynamically lighting the scene for added affect.

A new element emerges as the team press on though, in the form of a varying breach mechanic. It turns out that, being based on actual real-life events, not every scenario can be broached the same way, including breaching, and so the team has implemented different options for the gameplay impediment, including explosives, flashbangs, kicking, straight opening and more. It’s a simple, yet fresh idea, and one I hope they utilise to player discretional value (ie, not locked to a required breach per room). In addition to this, the first room breached didn’t immediately break the player into the obligatory bullet-time we’ve seen emerge in these types of games, though it did happen later, so whether this is a result of story-telling, or the type of breach you use, will remain to be seen.

You’ve all seen the following components of this type of game before. Team presses on, more enemies appear, they’re taken out in ensuing drama and we hit the room (with said slow-mo breach) where our hostages are being held. A few headshots later and their secured and ready for extraction. This might require some new gameplay component to get them out of the building, but in the interest of time, the game ticks forward some and suddenly we’re out in the typhoon, boarding boats and entering an on-rails escape sequence - the likes of which, yep you guessed it, we’ve seen before. 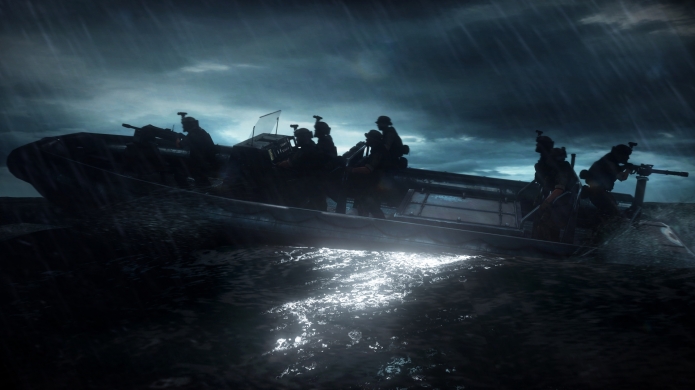 There’s no denying it looks spectacular though. Waves and spray splash up around the characters in the boat as it skips along the tumultuous water. Meanwhile, enemies positioned off to the right and left of the lane-ways pile up to get a crack shot at you. It’s no use though, you’re too heavily armed and too great a shot, and the only thing that might potentially get in your way is the falling palms or even more dangerous, collapsing buildings. But, again, as we’ve come to expect from these types of games, we do get through, everyone is seemingly safe and choppers lie in wait for our team’s ultimate extraction from the hot-zone. Demo ends.

So, single-player aside, and rarely exposed like so many ghost operatives you’ll play as, Danger Close did touch on multiplayer, reaffirming that this time around it would be handled in-house by them, with no DICE influence at all. Perhaps most interesting though was their concept of Blue Vs Blue to represent national pride among players around the globe. It’s a good idea to be sure, and in the wake of the flack they copped last year for having the Taliban as a Red team, it sort of makes diplomatic sense. Australia was added to this global list, with our SASR on show, though it didn’t appear we’d be getting any extra perks for being one of the best units in the world, but hey, that wouldn’t make sense.

And that was really it. They didn’t reveal much more than any of the above, and if you haven’t seen it already, you can catch the GDC trailer right here. Otherwise, stay tuned for our developer interview with Danger Close’s Richard Farrelly, coming soon.

Walking away from the unveiling though, I had a sense that being that this iteration of Medal of Honor was co-written by guys actually in the field, and real-world events means we might get a more grounded sense of what goes on in the lives of these types of operatives, but it also reeked of having the same sort of pacing and direction as games-gone-by. It looked amazing, and was being demoed on PC, but how it’ll end up looking on console also remains to be seen (there was a marked difference between PC and consoles for Battlefield 3). So all that’s left is to see where the team takes the game beyond what we’ve seen, and how it stacks up to the inevitable Treyarch CoD release coming at the end of the year as well. Either way, it’ll be interesting to see if modern conflict shooter fatigue will begin to rear its head this year, or if the genre has plenty of action-oriented life left in it. Stay tuned.

Read more about Medal of Honor: Warfighter on the game page - we've got the latest news, screenshots, videos, and more!
Tweet

Dracohawk
Posted 06:24pm 15/3/12
Commenting has been locked for this item.
7 Comments
Show