We've taken a stab at our 10 best games to play when in the middle of a crisis. From recent hits to gems we keep coming back to.
The Good Place - Finding Your Videogame Comfort Zone
Star Wars: The Old Republic Local Launch Developer Interview
Post by Steve Farrelly @ 12:34pm 15/02/12 | Comments
EA and BioWare gave AusGamers a chance to chat with Grant McDaniel, Senior Development Director of Live Services for Star Wars: The Old Republic in relation to the game's local launch plans, including their server situation, maintenance windows, customer service and more. Read on for what he had to say...


With a solid release date locked in for the Aussie, NZ, Hong Kong and Singapore launch of Star Wars: The Old Republic, EA and BioWare were kind enough to answer our questions about the game and their local launch plans. Many of these queries were lifted directly from our community, and on the most part we get a few decent answers, though we'd argue the game needs to launch here for a lot more to be posed in terms of performance, customer support and so on.

Read on for the full interview:

AusGamers: For the Australian launch, we have a few questions pertaining to the server situation and customer support, on a local level. For one, a reader would like to know if the Customer Support model is still being ironed out as he's been locked out of his account on three separate occasions due to issues with the Security Questions in place. Blizzard had similar issues for a very long time before making the retrieval process much easier and user-friendly - can you talk a bit about this?

Grant McDaniel: We are proud of our Customer Service organisation and what they have accomplished so far in supporting the fastest growing subscription MMO ever. Account security is an important issue to our players and therefore is important to us. Initially we had a more rigid approach which caused some challenges for players and therefore we changed the process and simplified it to allow more flexibility and ease of access. We constantly monitor and fine tune our customer support systems. And, we listen attentively to and track feedback we receive from customers through our communication channels. Our number one goal is to provide the highest quality of service to our customers. It is an ongoing challenge that we take seriously as a company and we will continue to do so.


AG: As far as servers go, can you fill us in on the APAC/Oceanic situation in terms of geographical locations for Aussies and New Zealanders, and what kind of maintenance window any such servers will have? Also, will players be able to switch characters across servers, and if so, will this be a free or charged service?

Grant: The server hardware is located in Australia and will allow customers from Australia, New Zealand, Hong Kong and Singapore to take advantage of decreased network latency and improved performance. Of course performance is dependent upon many variables that are outside our control including a player’s computer hardware, network configuration, and Internet connection speed so it will ultimately vary from person to person.

Our goal for maintenance windows is the same for everything else we do – we try to think about the player experience first. We want to minimise downtime as much as possible and will be constantly evaluating them to ensure they will affect the fewest players possible.

We know we have players from Australia, New Zealand, Hong Kong and Singapore in and enjoying the game now and that they may want to switch to regional servers once they come online. We want them to have that choice, and are offering free transfers for players in these regions that are already playing Star Wars: The Old Republic. These transfers will be a limited one-time offer to anyone in these countries who currently has or have had an active account prior to February 28, 2012. We will be providing more details to qualifying players in early March. 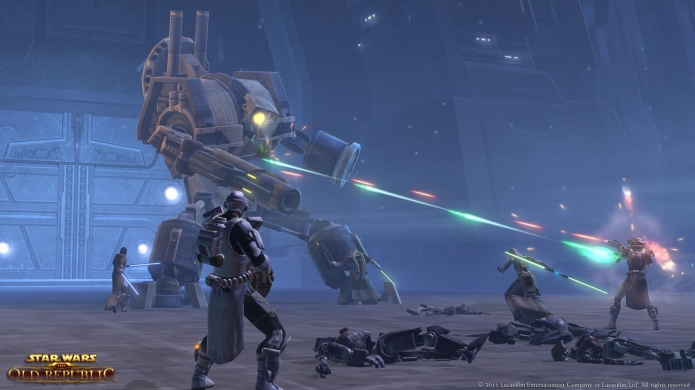 AG: Do you currently have projections for server populations, specifically in our local hood? And if they're low, do you have any migration plans? Is it a case of phasing out servers with low populations, or do you have plans to draw players from various regions to the game over a set period of time? Is there a timeline for a specific number of players to keep any of the above up and running? (Obviously servers are a big deal for us due to latency etc.)

Grant: Server populations are something we pay close attention to and as with our initial launch in December we will be doing staged server rollouts, starting with a few servers and opening more as needed. We want to ensure that players have a positive play experience and we will be monitoring both population and performance closely in order to determine when to open additional servers.

AG: Is there anything else you can elaborate on as far as servers go?

Grant: No, your questions so far have been very thorough. :)

AG: What are the plans for expanded gameplay as the game becomes more popular? Specifically, players are asking about more planets to level on, whether or not there'll be more companions or the customisation of companions and will there be any opportunities for dual speccing of characters (for example, is a talent system still being looked into where, say, a mercenary can spec for dps to solo levelling and switch to healing for a flashpoint via a visit to the trainer without a hefty cost)? And what of Operations and PvP Warzones - Will we be able to queue more than a single group anytime soon?

Grant: Everything you have mentioned is on our list and we know that Operations and PvP Warzones are two of the most popular, most played areas in the game so they are getting a lot of our attention as well. I can’t say anything specific right now as far as what is coming when, but James Ohlen recently shared some of what is coming in a video. Be sure to check it out. (Watch it right here on AusGamers.)

AG: Finally, from a UI perspective, one of our readers asked about scalable UI: 'Missing' UI features like target's target. Windows that are movable, resizable, and don't close by themselves arbitrarily. It would be really nice to be able to have the shop, my character, and my inventory open at once. And Macros. Please? Healers are getting around this with programmable keyboards, but its very clunky. What's being done to address any and all of the above?

Grant: Again you have hit on a lot of the priorities currently being discussed. There is a team devoted to UI customisation. Look for more information on this coming soon.

So a lot of "please wait, we're addressing that" answers, but it's still good to know a lot of players' issues, requests or ideas are being discussed internally with a mind to fully implement in the not-so-distant future, plus Aussie servers is still a huge draw considering Blizzard still haven't committed to any such server placement in WoW's seven-plus-year lifespan.

The rest will hinge on just how long it takes for any of their "coming soon" plans to be implemented, and just how the game performs on a local level. Either way, watch this space, and be sure to drop your own thoughts and any other questions in our Comments section, and if there's enough, we'll chase a follow-up interview in the near-future.

And again, if you haven't checked out our review of the game, click here.

Read more about Star Wars: The Old Republic on the game page - we've got the latest news, screenshots, videos, and more!
Tweet